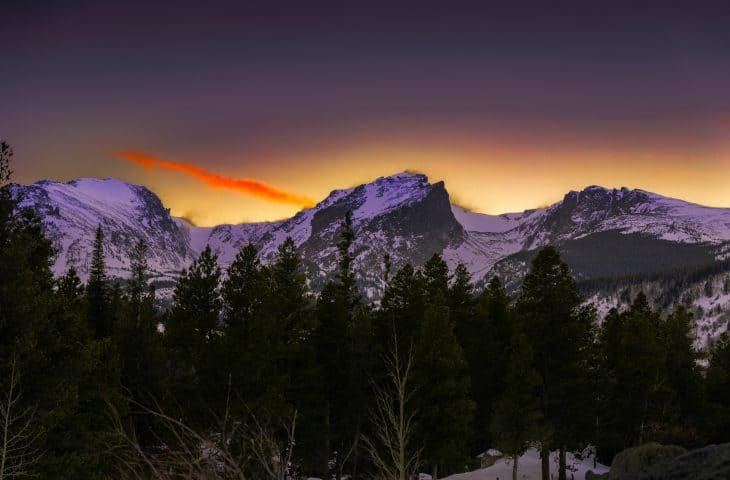 There are many things to do in the Rocky Mountains.

The most popular tourist activities in the Rockies are hiking, fishing, hunting, mountain biking, skiing, snowboarding, camping, and mountaineering.

Wyoming has the second-highest point of the Rockies after Colorado.

Wind River Peak is the highest point in the southern end of the Wind River Range that is located Wyoming and stands at 4209.1 meters. Aside from the Rocky Mountain’s highest peak in Colorado, some of its highest peaks are found in Wyoming, as well as Montana, and New Mexico.

The Rocky Mountains has diverse wildlife.

The mountain range is a shelter for many animals. Beyond the Rocky Mountains’ national park, animals such as grizzly bears, black bears, mountain lions, coyotes, elk, and marmots can be seen. It is also home to rare animals like lynxes and wolverines.

The scenic mountain range is popular for many national parks.

It is not only home to wildlife but as well as to national parks. To name a few in the United States, those are Rocky Mountain Park, Royal Gorge, and Yellowstone. In Canada, the popular parks include Jasper National Park and Banff National Park.

There is a super-volcano in the Rocky Mountains.

The long mountain range has a super-volcano called ‘Yellowstone Caldera’ located in the Yellowstone National Park in the United States. Some believe that the volcano is overdue erupting. If it erupts, it could blow-up ash for thousands of miles across the country, causing a great catastrophe. Though expert assumes that this is less likely as its eruptions occur millions of years apart.

Highway 36 is the fastest route leading to the Rocky Mountain National Park.

From Denver, there are a couple of ways to drive to Rocky Mountain National Park. The fastest route travels north on Highway 36 through Boulder to the town of Estes Park, approximately 66 miles from Denver, then go to the Highway 34 into the national park.

The Rocky Mountain National Park is open all year.

Although the Rocky Mountain National Park is open all year, it has limited access during the winter and early spring because of the snow. However, some low-elevation paths or trails on the east side of the Continental Divide are open for snow-shoeing and hiking.

June to September are the best months to visit the Rocky Mountain National Park.

The best or most perfect time to visit or tour the Rocky Mountain National Park is from June to September where the snow is mostly melted. This makes the hiking trails and other attractions very accessible.

There is an old tea house on the Rockies.

There is a tea house that was built 7,000 feet above a valley in Lake Louise, on the Canadian side of the Rockies. The tea house has been there since the 1920s to serve the travelers. Today, it is open throughout the summer season and operated by local families with a touch of 100 years of history.

The bighorn sheep is the "mascot" of the Rocky Mountains.

Around 400 bighorn sheep are dwelling in the Rocky Mountain National Park. This kind of sheep is the largest wild sheep in North America. The big sheep became the National Park’s symbol due to their presence in the mountain range. Most of them show up in the month of May to June.

Autumn is the mating season of elk in the Rocky Mountains.

Nearly 300 elks camped in the National Park during autumn which is their mating season. During this time, a bugle-like sound can be heard from miles. This bugle sound is a mating call produced by the male elk called ‘bull elk’.

The Mallet brothers are the first Europeans to report the Rockies.

In 1739, Pierre and Paul Mallet, French Canadian voyagers, traveled through the Great Plains. They saw the range of mountains at the headwaters of the Platte River, which local American Indian tribes called the “Rockies,” making the Mallet brothers as the first Europeans to report on this undiscovered mountain range.

MacKenzie discovered the upper reaches of the Fraser River and went to the Pacific coast on July 20, 1793. It is the first recorded east to west transcontinental crossing of America north of Mexico.

The Lewis and Clark Expedition helped many scientists.

In 1806, the Lewis and Clark Expedition became the first scientific reconnaissance of the Rocky Mountains. They collected specimens that were important for zoologists, botanists, and geologists.

The first name of the Grand Lake was the Spirit Lake.

One of the best sceneries in the Rocky Mountains is the Grand Lake, Colorado’s largest lake. According to the indigenous of the Ute Tribe, they believe that the souls of the dead lived in the cold waters of the lake thus they named it ‘Spirit Lake’.

There are a lot of bird species in the Rocky Mountain National Park.

There are over 250 different bird species known to habitat in the Rocky Mountain National Park, such as the Gray Jay, White-tailed Ptarmigan, and Dusky Grouse.

Athabasca Glacier is the most-visited glacier in North America.

Some of the most exciting landmarks in the Rockies are Athabasca Glacier in Canada. Its landscape allows its visitors to walk up the glacier to see the beautiful view of the ice field. It is the most-visited glacier in North America.

The Athabasca Glacier has shrunk more than 1.5 kilometers over the last 125 years and lost over half of its volume due to global warming.

The Rockies has a significant deposit of natural resources.

The natural resources of the Rocky Mountains are very abundant. It is composed of different minerals such as gold, silver, copper, tungsten, zinc, molybdenum, and lead.