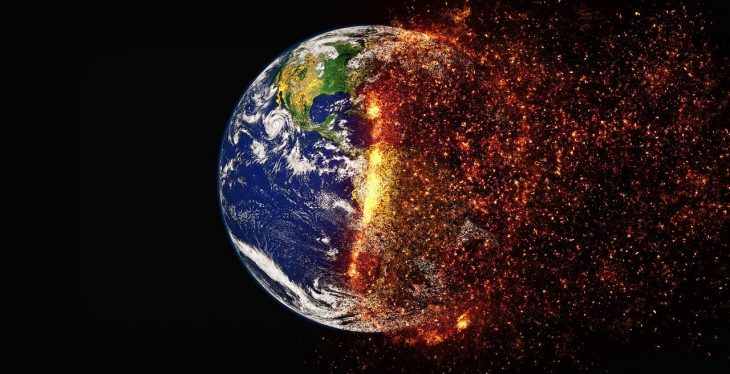 Global warming is one the most pressing issues of today. Whether you want to believe it or not, global warming affects everyone and everything in the world. Since it was first formed, the Earth is now in its hottest state. These global warming facts will walk you through the fundamentals and projected effects of global warming if it remains unchecked.

Quick Facts
Essential Facts
Interesting Facts
Table of Contents
01 Global warming is different from climate change.
02 The greenhouse effect is a natural phenomenon.
03 Fossil fuels are the main source of excess greenhouse gases.
04 Warmer ocean water can release frozen methane into the atmosphere.
05 Melting ice can cause tsunamis.
06 Global warming could melt the permafrost across the whole world.
07 Sea levels have risen at least 3 mm per year over the past two decades.
08 Rising sea levels can wipe entire nations and cities off the map.
09 Melting ice caps have more effects than rising sea levels.
10 Global warming can turn the oceans acidic.
11 Warmer air holds more water vapor.
12 A 2°C increase in average temperatures could trigger a Hothouse Earth.
13 Global warming is a major characteristic of the Anthropocene Epoch.
14 Several methods exist to counter global warming.
15 Solving global warming is sometimes described as a prisoner’s dilemma.
16 Conservative groups worldwide refuse to acknowledge climate change.
17 Several international agreements exist aiming to stop climate change.
18 One major success is the banning of aerosols.
19 The development of green energy has mixed success.
20 It will take centuries for the Earth's climate to recover.

Global warming only refers to the increase in global temperatures thanks to human activity. On the other hand, climate change covers both global warming and its effects. This includes rising sea levels and changes in established weather systems. Other effects include heat waves and increased desertification, which brings flooding and smaller harvests. Something self-explanatory from global warming facts, but still important for all that.

The greenhouse effect is a natural phenomenon.

This is something that needs to get cleared up, as far as global warming facts go. Without the greenhouse effect, Earth’s average temperature would be below zero. It works when heat from the Sun isn’t reflected back to space from the surface. Instead, greenhouse gases in the atmosphere absorb and keep the heat.

This is similar to the way a greenhouse’s walls and ceiling keep heat inside the building, hence the name. Greenhouse gases include carbon dioxide, methane, and even water vapor. All those gases are present in the atmosphere. It’s only the large increase in their levels from human activity that “traps” these gases and heat in the atmosphere, causing global warming.

Fossil fuels are the main source of excess greenhouse gases.

When we burn fossil fuel, it releases carbon dioxide into the air – which is the most common of all greenhouse gases. However, it’s not the only source. Rotting plant matter and animal waste from farm activities is another major source. In this case, the resulting greenhouse gas is methane. It’s not as common as carbon dioxide, but 84% more potent as a greenhouse gas.

Warmer ocean water can release frozen methane into the atmosphere.

This is one especially dangerous consequence of global warming. Scientists have even described it as a ticking bomb. Methane can get trapped inside ice crystals called clathrate hydrates. They are especially common near the ice caps. Large amounts of methane are inside these crystals. Once they melt, the methane will escape through the water back into the air. Definitely one of the more alarming global warming facts.

Melting ice can cause tsunamis.

This is because ice crystals called clathrate hydrates reach deep within the ocean floor. Once they melt, they’ll vacate large amounts of space. The surrounding earth will then fill the space, causing local earthquakes. This, in turn, will then disturb the surrounding water, enough to set off a tsunami.

Global warming could melt the permafrost across the whole world.

The permafrost is a phenomenon where the subsoil is always frozen even in summer. This only happens in extreme northern or southern latitudes, close to the ice caps. This makes the ground hard and stable. If the permafrost melts, this could depress or uplift the local geography. This effect extends to the infrastructure in the area. For example, melting permafrost has caused houses to sink into the ground.

Sea levels have risen at least 3 mm per year over the past two decades.

What’s worse is that annual increase is projected to rise in the future. Scientists warn that sea levels could rise between 61 to 110 cm throughout the 21st century. 90% of this water will be Antarctic meltwater.

Rising sea levels can wipe entire nations and cities off the map.

This isn’t as dramatic as it sounds, but it’s still very bad. Entire island nations such as the Maldives might disappear. Cities at risk of disappearing underwater include Shanghai, Venice, and even New York. Entire coastlines will disappear, such as in low-lying countries like Bangladesh in Asia, and the Netherlands in Europe. If you haven’t been disturbed by these global warming facts yet, you definitely are now.

This is because the ice caps are all frozen fresh water. A sudden influx of so much fresh water into the oceans will affect the ocean currents. These currents depend on the rising and falling of cold and warm water. However, saltwater rises and falls at a different rate compared to fresh water. As fresh water gets added, the current balance which drives the currents gets disrupted.

A new balance will develop, but it will take a period where there won’t be any currents. This will greatly affect the climate especially in Europe and North America. Both depend on the Atlantic Gulf Stream to moderate their temperatures. If the Gulf Stream stops, summers will grow hotter and the winters colder.

Even the slightest change in pH levels of the ocean is enough to devastate the ecosystem. When carbon dioxide gets absorbed from the air into the ocean water, it forms carbonic acid. While not a very powerful acid, it’s enough to kill and dissolve coral. That alone is bad enough, considering coral reefs are major sites of underwater life.

Beyond their habitat, shellfish and fish are also affected by acidic ocean water. This could lead to reduced fish stocks or outright marine extinctions. The former would affect humans as a major food source they depend on takes a hit.

This is one reason why global warming can result in stronger storms and heavier rains. However, water vapor is a greenhouse gas too – increased levels of it in the air only makes it warmer. This is a phenomenon that scientists call “water vapor feedback.”

A 2°C increase in average temperatures could trigger a Hothouse Earth.

Compared to previous average temperatures before the industrial age, the global temperature is projected to increase 2°C.  Currently, the Earth is in a “hothouse” state. Hothouse Earth has no glaciers and a temperature of at least 0 degrees at the poles, with the equator reaching 28°C.  Scientists estimate that 85% of Earth’s history has been in a hothouse state. The difference is that that period of time had natural causes. The possible Hothouse Earth of our future will instead be caused by human activity.

Global warming is a major characteristic of the Anthropocene Epoch.

The Anthropocene is the unofficial term for Earth’s current geological period. The name comes from how human activity has defined this period. Global warming is only one of the many ways we have done so. In particular, we have raised greenhouse gases to levels unseen in over 800,000 years. And that’s only one factor behind global warming.

Another factor is deforestation, which contributes to an ongoing mass extinction. Previous mass extinctions result from large-scale catastrophes such as asteroid impacts. We, in contrast, drive mass extinction through industrialization and urbanization. For instance, over 80% of wild mammals have been extinct as of 2018. 50% of all known plant life are also extinct, as well as 15% of all fish species. Something from global warming facts to remember, for when you’re tempted to think your lifestyle isn’t affecting the rest of the planet.

Some of these methods are even partly implemented already, though much still needs to be done. Reforestation and low carbon technology are only a couple of innovations aiming to mitigate global warming. Making the change from fossil fuels to green energy is the most promising method of them all. Now that’s one for more encouraging global warming facts.

Solving global warming is sometimes described as a prisoner’s dilemma.

A prisoner’s dilemma is a situation where two people fail to cooperate despite shared interests. With regard to global warming, all nations have an interest in stopping it. Despite that, many nations are unwilling to pay the cost of switching to a green economy. This sets up a situation where someone will lose either way. Switching to a green economy will damage economies in the process. But if a switch is not made, then global warming continues to worsen.

Despite all the scientific evidence and studies showing climate change is real, some officials and groups still refuse to acknowledge it. The main reason behind this opposition is economic. Corporations and governments alike are unwilling to pay to switch to a green economy.

In recent years, there has been growing public support for the climate change advocacy. Even so, skeptics still stand their ground. Some have even claimed that the climate change movement is a Communist plot to undermine capitalism and democracy.

The first of these agreements was the United Nations Framework Convention on Climate Change (UNFCCC). 165 nations signed the UNFCCC in Rio de Janeiro in 1992. It pledged a commitment to limit greenhouse gas emissions.

Succeeding agreements share this commitment, such as the Kyoto Protocol of 1997. This was the first agreement that the USA first refused to cooperate with on economic grounds. The Copenhagen Accord followed in 2009, and the Paris Agreement in 2015. Both were disappointing to environmentalists for different reasons. The Copenhagen Accord’s goals were too limited as far as environmentalists saw them. As for the Paris Agreement, the criticism is that its terms are non-binding to signatories.

One major success is the banning of aerosols.

You also know them as chlorofluorocarbons (CFCs). Once used in refrigerators and similar appliances, CFCs in the air damage the ozone layer. CFCs also happen to be powerful greenhouses gases themselves. The Montreal Protocol of 1987 banned the use of CFCs in machinery. This led to a huge drop in CFC levels in the atmosphere. This led to the ozone layer recovering and reduced greenhouse gas levels. Another encouraging example of global warming facts.

The development of green energy has mixed success.

It will take centuries for the Earth's climate to recover.

This is what’s called climate inertia. The atmosphere is too warm, and there’s already so much greenhouse gases in it. It’ll take time for it to cool and for all the greenhouse gases to naturally disappear. Think of it as the delay between stepping on a brake and a car coming to a stop.

With hope and a lot of action, global warming should cease while the climate stabilizes. We only need to stop putting more greenhouse gases into the air. We also need to stop damaging the Earth’s ability to manage its temperature. If we don’t, then global warming will never stop, and the climate will keep changing – perhaps for the worst.