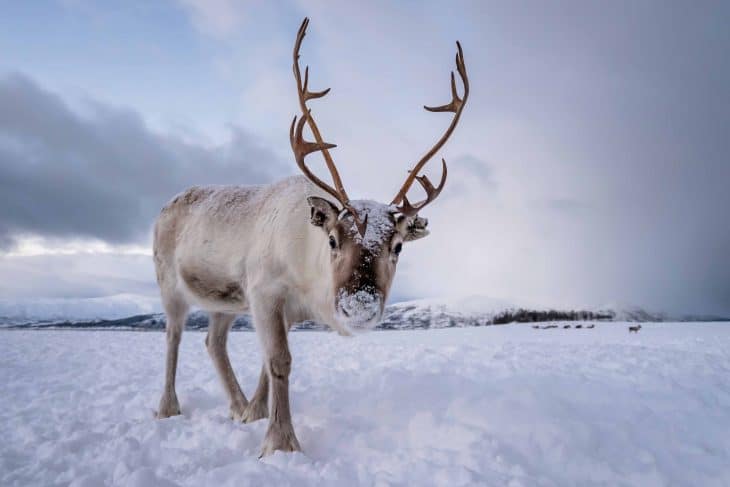 The reindeer is popular in our modern culture because of Christmas and Santa Claus’ Rudolph the Red-Nosed Reindeer. You can usually find them in the Asian, European, and North American regions at the far out north. These areas have rugged landscapes and frigid winter temperatures that are perfect as their natural habitat.

Reindeer come in 14 subspecies, and although two of them are already extinct, their population is still in 7 figures (about 3.5 million in North America, 1 million in Eurasia, and 3 million in northern Europe). But don’t get overconfident, the IUCN has listed the reindeer as ‘vulnerable’ because of its population decline of more than 35% over the last 25 years. Now, here are 40 facts about reindeer that you need to know!

Quick Facts
Essential Facts
Interesting Facts
Table of Contents
01Many people are curious if the reindeer is real.
02Rudolph is actually a female reindeer.
03Male reindeer start to grow their antlers early in the year.
04The word “rein” came from the Norse.
05Don’t be confused about reindeer and caribou.
06They make a “grunting sound.”
07Reindeers have good mobility in a snowy environment.
08They have diverse predators.
09A calf can weigh from 5 up to 20 lbs.
10They have a good sense of smell.
11Reindeer can form a giant herd of more than 100,000.
12They have enhanced night vision.
13Reindeer were among the last animals we learned to domesticate.
14Female reindeer that breed weigh more than those that do not breed.
15Bloodsucking insects feast on reindeer every summer.
16Humans first hunted the reindeer around 45,000 years ago.
17Reindeers are not endangered species.
18Elliot the Littlest Reindeer has an amazing story to tell!
19Drew Barrymore played Olive in Olive, the Other Reindeer.
20There is a Christmas song about a reindeer running over a grandma.

Many people are curious if the reindeer is real.

Did you know that many ask if the reindeer are real? Obviously, the answer to that is yes! They very much exist. That question most likely became common due to the reindeer’s affiliation with Santa Claus. Rudolph the Red-Nosed Reindeer is a fictitious character conceived by Robert Lewis May, a children’s book author. This world-famous reindeer is Santa’s 9th reindeer companion, and the last one out of the bunch.

Rudolph is actually a female reindeer.

According to research, Rudolph the Red-Nosed Reindeer is actually a female reindeer. This is because the female antlers are intact during Christmas, professors from Edinburgh University assume that Rudolph is female, as well. A male reindeer, on the other hand, lose their antlers in the middle of December. In the famous Christmas legend, Santa Claus’ reindeer pull a sleigh through the night sky and assist him in delivering gifts to good children during Christmas Eve.

Male reindeer start to grow their antlers early in the year.

When antlers shed, they tend to get bigger the next time they grow, compared to horns. Male reindeer start to grow their antlers in February while female reindeer grow theirs by May. Both males and females fully develop their antlers at a similar pace, even though they lose them on various occasions.

Meanwhile, the males shed theirs during November, and they have to wait until spring to grow them back. Females, on the other hand, retain their antlers during wintertime until the time they give birth during May.

The word “rein” came from the Norse.

The word “rein” came from the Norse, and the word “deer” was primarily broader in meaning but it started to be more specific as time goes by. The equivalent of “der” in Middle English is any sort of feral beast. Moreover, the word caribou came from French Mi’kmaq qalipu, which means “snow shoveler” and describes its habit of pawing through the snow for food.

Don’t be confused about reindeer and caribou.

There’s a difference in the usage of the words caribou and reindeer. The International Union for Conservation of Nature clarifies that these two are from the same class called Rangifer tarandus. In Europe, they use reindeer, while it’s Caribou in North America.

They make a “grunting sound.”

Most people agree that when reindeer make some noise, it sounds like grunting. Although there have been times when they also make noises that have been defined as sounding like barks or even gas passing or farting.

Reindeers have good mobility in a snowy environment.

The reindeer have large distinctive hooves with four “toes” on each foot. These hooves present them with several advantages in their harsh Arctic environment. In order to avoid submerging in the snow, their toes are stretched away from each other to spread their body mass evenly and stabilize their position on the ground.

They have diverse predators.

Reindeer have mixed predators depending on where they are at. They have to watch out for Arctic foxes, brown bears, gray wolves, mountain lions, coyotes, lynx, and even golden eagles who typically prey on young reindeer. Strong and healthy adult reindeer, however, can protect themselves from predators, especially in a huge herd. Reindeer are very social animals, and they eat, move, and rest in groups.

At birth, a young or baby reindeer, called a calf, can weigh from 5 up to 20 lbs or 2.5 to 9 kg. Like some four-legged animals, calves are able to stand on the first hour after birth, and within a week, they can already start to consume solid food, in addition to their mother’s milk. Female reindeer have a gestation period of around 7.5 months, generally giving birth to only one calf at a time. In fact, they can have up to four young at a time.

They have a good sense of smell.

They actually have hair all over their entire nose, which aids in warming up the cool breeze when it goes through their respiratory system. The reindeer’s excellent sense of smell helps them locate hidden food under the snow, sense danger, and identify direction. They are also able to pick up scents well and are quite the sniffer.

It’s quite common to see reindeer perform daily activities together in a group of 15. However, during the spring season, they may form giant herds of more than 100,000 animals. They usually go where there is food, walking for a thousand kilometers, especially during the cold season.

They have enhanced night vision.

If humans can see light at a 400 nm wavelength, reindeer can even go below that at 320 nm, according to research. Moreover, reindeer have what you call tapetum lucidum or a sheet of tissue inside the eyes, common to a lot of animals, which can be found at the back of the retina. This layer of tissue reflects light which helps enhance a reindeer’s eyesight.

Reindeer were among the last animals we learned to domesticate.

Being the last deer class to be domesticated on a large scale, reindeer are also quite a good source of food and clothing. Interestingly, reindeer were among the last animals we learned to domesticate. In fact, some experts believe that they are far from trained. Located in nine countries as of the moment, about 100,000 employed people take care of around 2.5 million domesticated reindeer.

Female reindeer that breed weigh more than those that do not breed.

Reindeer have learned to adapt optimal metabolic efficiency for both the warm and cold months. Its body composition varies deeply with the seasons. However, female reindeer that breed weighs about 10 kg more than those that do not breed, especially within the summer months to early autumn.

Bloodsucking insects such as mosquitoes, reindeer warble fly, botflies, and deer botflies, usually plague the reindeer every summer and can create ample stress to inhibit feeding and calving behaviors. Generally, grown-up reindeer lose tons of blood every week from being bitten.

Humans first hunted the reindeer around 45,000 years ago.

Hunting reindeer has been around for thousands of years, with them being considered as a significant part of anthropological literature related to hunting. The modern-day, reindeer symbolize wisdom, knowledge, resourcefulness, creativity, cleverness, and inventiveness. Also viewed for their nobility, reindeer continue to represent a continuation of several tribes.

Reindeers are not endangered species.

Although they are not endangered species, the IUCN has listed the reindeer as “vulnerable” because of its population decline of more than 35% over the last 25 years. Nonetheless, they are of ‘least concern’ because of their overall high population and widespread range. According to some experts, no one can exactly tell about the cause of the decline in herd numbers, but it is likely linked to climate factors affected by extreme summers and winters, and food shortage.

Elliot the Littlest Reindeer has an amazing story to tell!

Released in 2018, Elliot the Littlest Reindeer is a Canadian computer-animated Christmas film written and directed by Jennifer Wescott and featuring the voices of Samantha Bee, Morena Baccarin, Josh Hutcherson, Martin Short, Jeff Dunham, and John Cleese. The movie has several positive messages, the strongest of which portrays perseverance. Suited for older kids than younger ones, the movie’s setting, a colorful vocabulary, cultural references, and topical jokes would be a perfect family treat for all. Click here for the trailer.

Drew Barrymore played Olive in Olive, the Other Reindeer.

Did you know that there is a popular animated Christmas film about Santa’s reindeer? Made in 1999, it was actually based on a 1997 children’s book authored by Vivian Walsh and illustrated by J. Otto Seibold. Millions even tuned in during its first broadcast, with Drew Barrymore voicing Olive. The film received a nomination from the Emmys for Outstanding Animated Program.

There is a Christmas song about a reindeer running over a grandma.

Have you ever heard of the funny Christmas song called “Grandma Got Run Over by a Reindeer“? Written by Randy Brooks, the husband-and-wife duo of Elmo Shropshire and Patsy Trigg originally performed the song in 1979. According to a survey, radio listeners have a mixed opinion about the song, making “Grandma Got Run Over by a Reindeer” the only song that reached the top while being both well-liked and disliked. The like rating went over 30% and dislike was at around 22%. 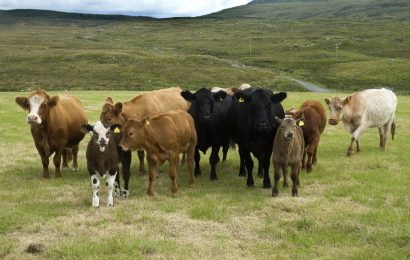