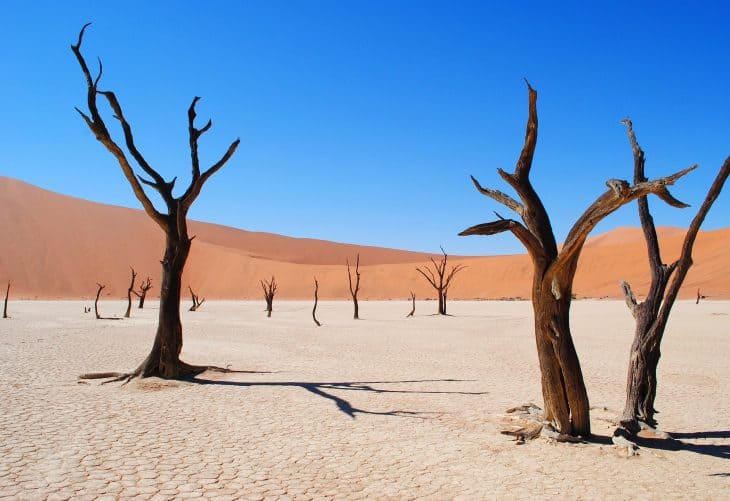 Deserts are areas of arid land where there is little rainfall or precipitation. Deserts provide a hostile living environment for animals and plants. Deserts cover about one-third of all the land on Earth.

Plants Survive in the Desert by Storing Water

Desert facts indicate that in order to survive in an arid environment, most plants have learned to quickly absorb water from the ground during and after a rainfall and to store it, using it slowly until the next rainfall. Plants have adapted in different ways in order to do this.

The Sahara Desert Is the World’s Largest Non-Polar Desert

The Sahara Desert in Africa covers over 3.3 million square miles. It is a subtropical desert in Northern Africa and the world’s largest non-polar desert. The Sahara is so large, its area is more than the areas of the United States and China combined.

The Acacia Tree Is Leafless During Droughts

Desert biome facts tell us that in order to conserve water, plants and animals have developed different tactics. The acacia tree drops its leaves during droughts in order to store water. Other plants have reduced the size of their leaves, or have become leafless. They also open their stomata at night when temperatures are lower than during the day.

Xerocoles Are Animals that Can Live in the Desert

Animals that live in the desert are able to tolerate the temperature changes and can survive with less water. They are called xerocoles. Camels, antelopes, and some amphibians, reptiles, and birds call the desert home. Most of these animals get their water through plants. They are generally camouflaged to match their environment and preserve their energy.

Desert Temperatures Vary Depending on Type of Desert

There are three types of deserts: Cold Winter, Cool Coastal, and Subtropical. Subtropical deserts may be the type of desert we most commonly tend to picture in our minds, but the biggest desert is a cold winter desert. The average temperatures in these deserts vary. The deserts can be found at different latitudes, which affects their temperatures. Deserts near the equator are subtropical, whereas the deserts towards the poles are colder.

The Atacama Desert Is the Driest Desert

The Atacama Desert is located on the coasts of Chile and Peru in South America. It is the driest, non-polar desert on Earth. The desert receives just over half an inch of rain a year. Sometimes, several years go by without rainfall. It is believed that no significant rain fell upon the Atacama from 1570 to 1971. Geographers have hypothesised that the mountain ranges surrounding the desert keep it from getting moisture.

Xerophytes are desert plants. The cactus is a xerophyte and is most commonly found in North or South American deserts. Different cacti have adapted to their arid environments by storing water, becoming waxy, and reducing the number of stomata they have. A stomata is like a human mouth that breathes in carbon dioxide for a plant to survive.

When we think of Antarctica and the Arctic, we generally think of snow and ice, not deserts. However, desert biome facts indicate the poles are home to the two largest deserts on the face of the planet. The world’s largest desert is the Antarctic Polar Desert. It covers over 5.6 million square miles. The second largest is the Arctic Polar Desert, which covers parts of Canada and Alaska. It is over 5.4 million square miles in area. The Sahara is the world’s third largest desert.

There Are Cold Deserts

Deserts are not just hot, sandy expanses. There are cold deserts as well. The Gobi desert of China and Mongolia and the Taklamakan desert of China are arid, cold deserts. Their water generally comes in the form of snow or fog. Both the North and South Pole feature deserts.

A Camel’s Humps Are Not Full of Water

It is a popular myth that camels’ humps are used for storing water. According to desert facts, they are actually made of fatty tissue and serve to keep a camel cool. Camels minimise their water needs by producing concentrated urine and dung. They can lose up to a staggering 40% of their body weight due to lack of water and not die. They are perfectly adapted to their dry, hot habitat.

There Are Four Deserts in the United States

The US is home to the Great Basin Desert, the Mojave Desert, the Sonoran Desert, and the Chihuahuan Desert. These deserts are primarily found in the southwest region of the United States. Geographers don’t necessarily agree as to their boundaries and whether they are all separate deserts; however they do maintain the geographical definition of deserts thanks to their aridity.

The 4 Deserts Race Series takes Athletes Through the Sand

The 4 Deserts Race Series is an endurance event for runners and lasts multiple days. The four deserts included in the races are the Gobi Desert, the Atacama Desert, the Sahara Desert, and the Antarctic Polar Desert. A documentary has been made about four runners attempting to complete the different racecourses, each of which is located on a different continent. 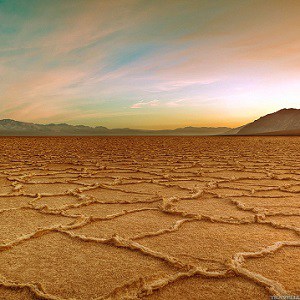 Deserts cover about one-third of the total land on Earth. They are defined as arid regions that have minimal rainfall. While the hot, dry deserts of Africa tend to capture the public imagination, the largest desert in the world is actually the Antarctic Polar Desert. The desert biome is composed of the different animals, known as xerocoles, and plants, xerophytes, which inhabit the desert. The cold, coastal, and subtropical deserts each have their own plants and animals that make their regions unique.