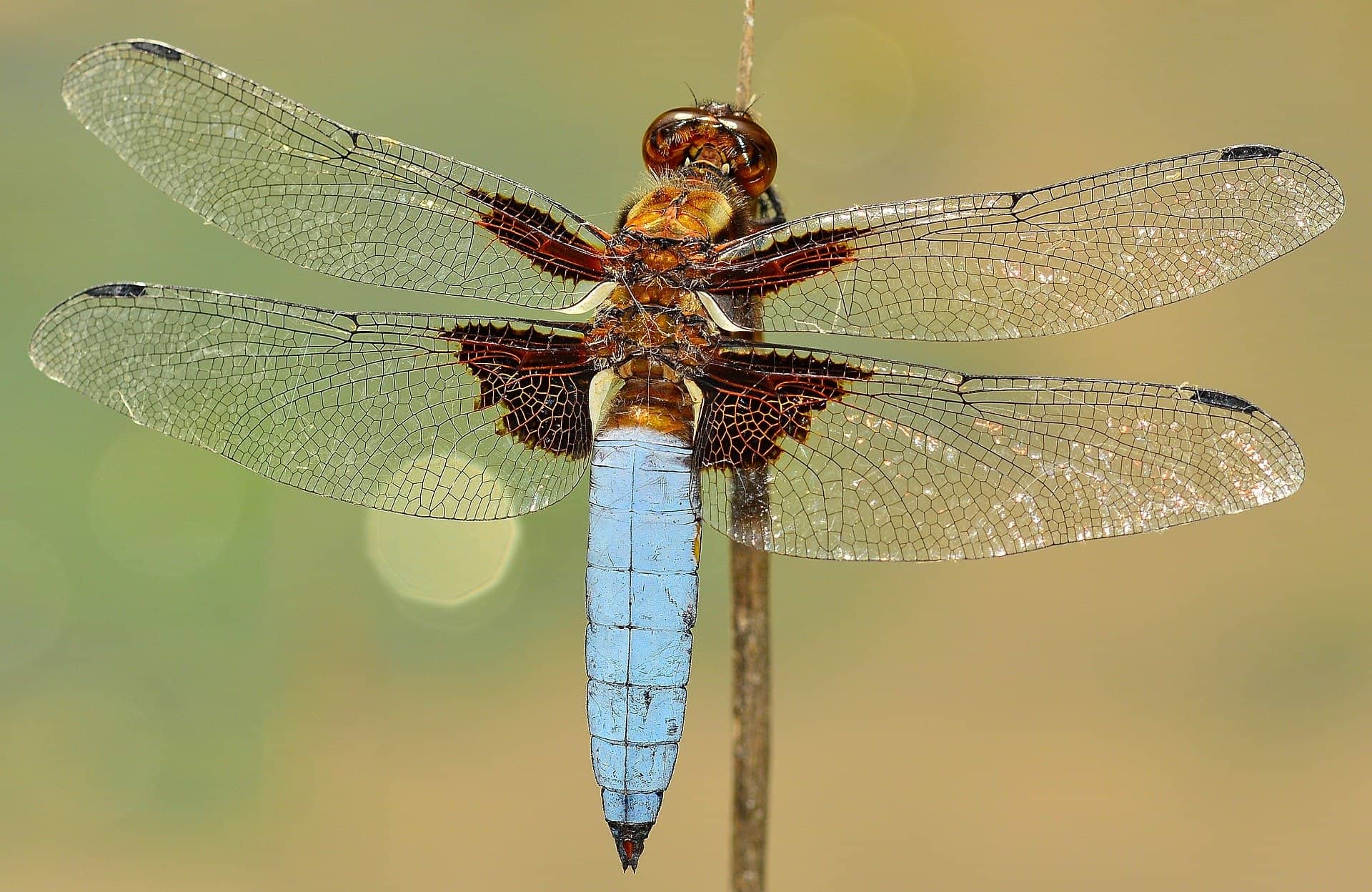 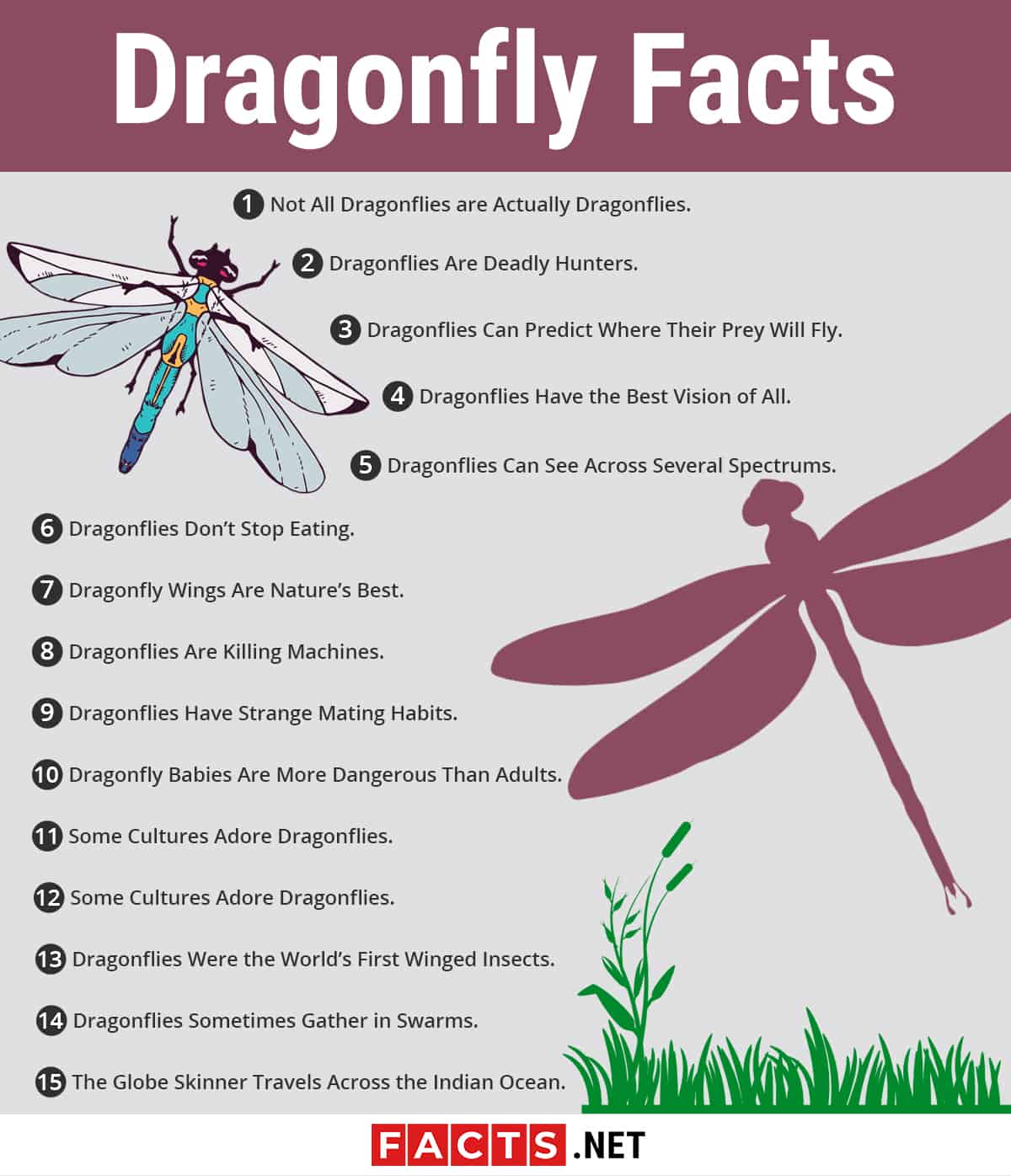 The first of our dragonfly facts is that there are over 3,000 species out there, with new ones being discovered all the time. But did you know that some creatures that appear to be dragonflies are not actually so? Damselflies are not really dragonflies, even though they look exactly like them, and many people mistake them for dragonflies. You can tell dragonflies apart because when at rest, they hold their wings flat and away from their bodies. Damselflies, on the other hand, hold their wings against their bodies.

Although they’re often associated with beauty, dragonflies don’t quite live up to their symbolism. Scientists found fossils they call Meganeura, meaning giant dragonflies. These creatures were such deadly hunters that they could have taken over the earth. Though now much smaller, dragonflies still make formidable hunters. Most eat small insects, but they’ll eat bigger ones if they can get away with it. Many are also cannibals. Some of the larger species will even eat bigger animals, like tadpoles and small fish.

Dragonflies Can Predict Where Their Prey Will Fly

The most astounding of our dragonfly facts was discovered in 1999. Scientists used to think they chased their prey, but it’s now known that dragonfly brains can predict where their prey will go based on its speed, direction, and size. They can pop up at a particular spot before their prey do, so their food flies directly into their mouths. Dragonflies catch their prey an impressive 95% of the time. By contrast, sharks have a 50% success rate, while lions stand at 25%.

Dragonflies Have the Best Vision of All

The human eye can see straight ahead, and, through peripheral vision, a little to the right, left, above, and below. Compared to flying insects, however, this is nothing. Most have around 6,000 eye facets. This means that they can see all around them at the same time, a valuable tool if you fly. The average dragonfly, on the other hand, has around 30,000 individual facets, which means they get 30,000 individual images which their brains turn into a single picture.

Dragonflies Can See Across Several Spectrums

Dragonflies also have the best visual range. Human eyes have three opsins, which allow us to see the visible colors of the rainbow. Dragonflies have five opsins, which lets them see the colors we do, but also lets them see invisible (to us) UV light. They can also filter light to reduce glare, while we need sunglasses to do the same. This is why dragonflies are so very hard to catch. They can see all around them simultaneously, and can do so in both darkness and light.

One of the most disturbing dragonfly facts recently discovered involved how they eat. Most creatures will only eat until they are full, but this is not the case with dragonflies. Researchers have found that these creatures will keep eating for as long as there is food available. The only time they’ll stop eating is when there’s no more to eat. In an experiment, a dragonfly was given 30 flies, so it ate them all in quick succession. Dragonflies can actually eat one-fifth of their own body weight every day.

Scientists are fascinated by dragonfly and damselfly wings because they’re so maneuverable. Both species have four wings, each of which can operate independently. This allows them to fly, hover, zoom forwards, backwards, and sideways. They can do so because each wing has its own set of muscles. No other insects have the same degree of control, which is why they’re all prey to dragonflies. Because they can’t really walk, only support their own weight, dragonflies will eat and mate in flight.

Among the less-known of our dragonfly facts is that they’re built to kill. Odonata is the Greek word for “toothed ones”, and, while most dragonflies couldn’t break human skin, insects stand no chance. When dragonflies catch their prey, their two front legs grip it, preventing escape. Then their jaws shred the wings. Finally, they begin feeding. Dragonfly jaws can open as wide as their heads. Even when trapped in a spider’s web, many dragonflies have been seen eating their captors.

While most species have courting rituals, dragonflies don’t. Males simply attack females by clamping them with their forelegs and jaws. Scientists are still baffled by the male organ, because it has barbs in it. They think it’s to scoop out the semen of rival males to ensure his mate only produces his children. Some species will then guard the female to make sure no others can have her. Once the male is sure the female’s eggs have been fertilized, he’ll then leave her.

Dragonflies are born in water as larvae, called nymphs, and move by shooting water out of their rectums. Among the most well-known of our dragonfly facts is that they’re even more voracious than adults, feeding on bigger creatures and even human flesh. This period can last for up to two years, after which time the nymph will crawl out of the water, discard its exoskeleton, and sprout wings. It can take a few hours to a few days before they finally dry off, allowing them to fly.

Many Amerindian cultures associate dragonflies with the wind, as well as with happiness, speed, and purity. The Chinese believe they bring harmony and prosperity, and consider them good luck symbols. To the Japanese, they are associated with summer and autumn, as well as power, agility, and victory. They were especially revered by the Japanese Samurai warrior caste for their ability to move quietly, elegantly, and still be such effective predators – qualities that the Samurai no doubt hoped to cultivate among themselves.

Dragonflies Are Considered Bad in Some European Cultures

Europeans, by contrast, think dragonflies are awful things. Traditionally associated with bad luck, some believed that they were evil creatures sent by the devil to sow chaos and confusion. This is why the Welsh call them “the snake’s servants”. Since some species bite, the British call them Ear Cutters and Devil’s Needles. The Portuguese refer to them as Eye Pokers, while the Swedes thought they punished mischievous children or told them lies. Still others associated them with witches and demons.

Not only were prehistoric dragonflies much bigger than they are today, it is believed that they may also have been the first insects to develop wings. According to fossil records, dragonflies may have first developed functional wings sometime around 300 million years ago during the Permian Period. While some of today’s bigger dragonflies can have wingspans which measure up to five inches across, that’s nothing compared to their prehistoric ancestors who had wingspans as wide as two feet across.

Although most dragonfly species tend to be solitary creatures except during mating season, those in the Western Hemisphere have different habits entirely. It’s a common thing, especially in late summer and early autumn, to see many different dragonfly species gather in vast swarms. No one is sure if they do this to feed, to mate, or to migrate, but an organization in America which calls itself the Dragonfly Swarm Project was set up to get to the bottom of it.

The Globe Skinner Travels Across the Indian Ocean

Some dragonflies are migratory, depending on the climate they are indigenous to. The average migratory dragonfly travels around 7.5 miles a day as it escapes the oncoming winter, but, recently, a world record was confirmed. Scientists attached tiny transmitters to various migratory dragonfly species and discovered one that beats all records. The globe skinner not only supersedes all dragonfly species, but all insects. This breed travels some 11,000 miles back and forth across the Indian Ocean every year. 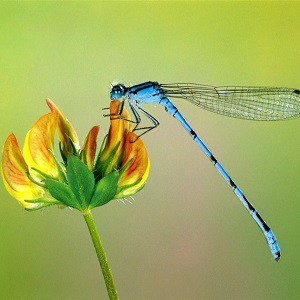 Dragonflies are beautiful but deadly creatures with the most complex eyes and the most versatile wings of any insect. Their brains can predict where their prey is heading, giving them a high success rate when hunting. According to fossil records, they are also the oldest winged insects on our planet. Though similar to damselflies, they are a separate species entirely. And while most are harmless, some species in the Western Hemisphere bite people, which is why some cultures think badly of them.