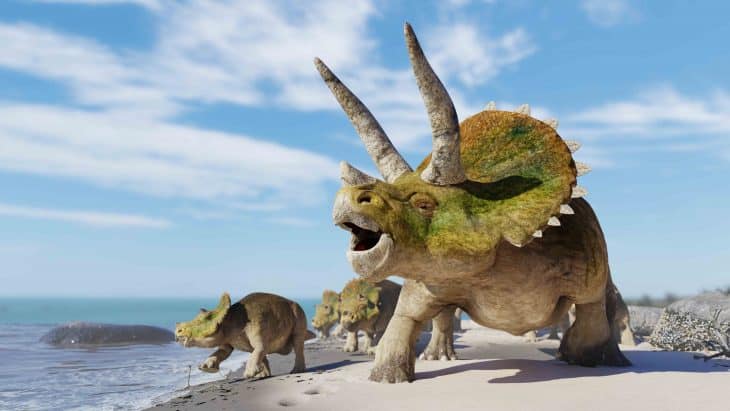 The Triceratops is one of the most popular species of dinosaurs. They are also known as the “three-horned dinosaur.” Several theories say that the Triceratops lived around 68 million years ago and inhabited what we now know as North America. Aside from its horns, the Triceratops is also widely famous for its skull and its beak. Yes, it had a beak. You won’t read a lot about it on Triceratops facts sites and guides! The Triceratops had bird-like beaks that they used to snip off hundreds of pounds of tough plants like cycads, ginkgoes, and conifers, every day. Triceratops’ jaws contained sets of shearing teeth. As one set of teeth wore down, the other set grew stronger.

Another distinct characteristic of the Triceratops is its prominent frill. This thin flap of skin scaffolded on solid bone certainly served a dual (or possibly triple) purpose. However, many experts believe its major purpose is to notify other members of the herd. This goes hand in hand with all similar anatomical structures in the animal kingdom. A vibrant frill, flushed pink by the many blood veins underneath its surface signified sexual availability or warned of a hungry Tyrannosaurus Rex approaching.

If they were so powerful, how did they die? Based on various scientific studies, the Triceratops survived until the end of the Cretaceous period. This was just before the dinosaurs were wiped out by a meteor impact. Paleontologists believe that dinosaur evolution had come to a halt at this period and that the ensuing loss of diversity had nearly ensured their extinction. Want to know more? Check out our 30 triceratops facts below! Learn more about this magnificent, yet mystical creature!

The skull of a Triceratops was one-third of its body.

Triceratops had a gigantic skull. It was about 3 meters or about 10 feet long. As a result, this made them one of the biggest terrestrial animals. The American paleontologist and fossil hunter John Bell Hatcher was one of the first to discover a triceratops skull in 1888.

The bones or skeleton of a Triceratops was remarkably strong. It had strong limbs, short feet with four hooves each, and each hand had three hooves. Each Triceratops had 10 neck vertebrae, 12 vertebrae between the neck and the pelvis, 10 sacral vertebrae, and perhaps as many as 50 tail vertebrae.

Triceratops had an opening called cloaca.

Triceratops, just like other dinosaurs, had a single opening called the cloaca. A cloaca has two purposes. Firstly, it’s for reproduction. Secondly, Triceratops used it for excretion. A new study also suggests that Triceratops and other dinosaurs used their frills and horns to attract a mate.

A newborn baby Triceratops was about 3 feet long.

A baby Triceratops, or a hatchling, was three feet long or 0.91 meters. Just like other animals, it also had a shorter nose compared to the adults. They were born with three horns.

Triceratops could have hundreds of teeth.

The teeth of Triceratops were arranged into groups called batteries. Each side of the jaw has 36 to 40 tooth groups or columns that would grow and replace the broken or worn tooth. Triceratops can also replenish up to 800 sharp teeth which they use to shed and grind low or small plants.

There were two valid species of Triceratops.

According to a source, a rich dinosaur collector bought a specimen named Triceratops Cliff for $1 million. Afterward, they donated it to the Boston Museum of Science. Several museums and collectors tend to look for skeletons of Triceratops as they are so big, distinctive, and resistant to soil erosion.

Triceratops used their frills to fight off predators.

A study claimed that Triceratops used their frills and horns for two things. Firstly, for mating. Secondly, to communicate or send a signal to other members of the herd. Moreover, they also used their frills to fight off their predator, Tyrannosaurus Rex, more popularly known as T-Rex. Some paleontologists have discovered partially healed horns and skulls of Triceratops, suggesting that they would fend off their attackers.

The shorter horn of a Triceratops was made of keratin.

The shorter horn or the horn at the end of a Triceratops mouth was made of soft protein or keratin, a material similar to human nails. Similarly, horns of other mammals like sheep, goats, cattle, and antelopes also have keratin.

Torosaurus and Triceratops could probably be the same species of dinosaurs.

Some studies suggest that Torosaurus, (another horned dinosaur), and Triceratops, are just the same species of dinosaur. However, they are only in different stages. They also say that Torosaurus is simply a full-grown Triceratops. However, some researchers claim that these two are not the same. This because a Triceratops has three horns, while Torosaurus has much bigger frills and two holes in it.