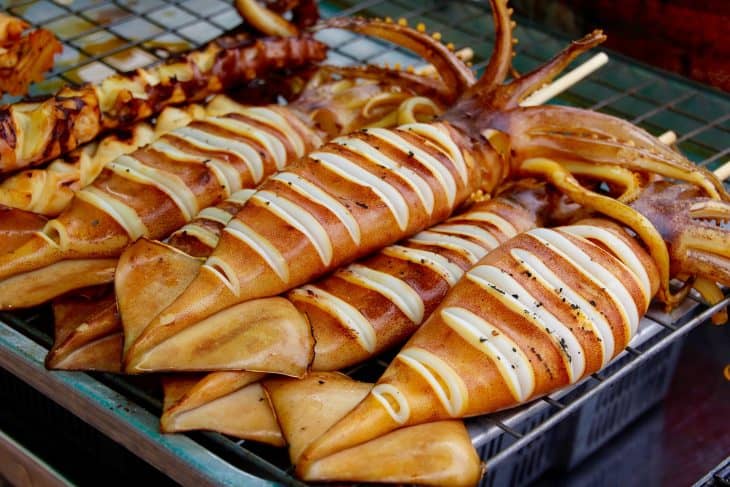 Squids are Different from Cuttlefish

One of our more well-known squid facts is that they’re often confused with cuttlefish. Some languages, like Spanish, don’t even have different words to distinguish between the two. This is understandable, since the two species look so alike. While both may have evolved from the same mollusk ancestor, squids are different in that they all have internal bone-like structures called a pen. Some cuttlefish have external shells instead of an internal pen, but not all. Without cutting them open, even experts have difficulty telling the two apart.

Although some octopus species have features that are similar to those of a squid (such as elongated heads that end in points), they belong to a completely different order of animal called octopoda. Unlike squids with their pens and cuttlefish (some of whom also have external shells), no octopus species have either internal or external skeletons. Every species of octopi maintains its shape through hydrostatic pressure – constantly keeping a force against the water around them (like how tires keep their shapes with air).

There’s a Simple Way to Tell Squids and Octopi Apart

There are many different ways to distinguish between squids and octopi, but generally the best way to tell them apart is that octopi usually have rounder, squishy heads which wobble as they move. Squid facts, on the other hand, tell us that their heads tend to be firmer and elongated. Octopi only have eight arms, while squid have eight arms and two tentacles. Finally, octopi prefer to stick to the sea floor and live in dens for protection, while squids prefer to live in the open.

Although squids have eight arms that grow back if cut, their two tentacles do not. Their tentacles are the appendages that contain suckers along the edge, which can grip things. These allow them to either capture prey or climb up vertical surfaces when out of the water. For males, the lower half of their left tentacle lacks suckers because that end acts as their penis. The males of some species lack dedicated sex organs, using their arms to do double duty.

All squid species have beaks, which are sharp and pointed. These are very hard, and are used to kill and tear their prey apart. Unlike the teeth and jaws of most other animals, these beaks contain no minerals whatsoever, and can even survive digestive juices. This is why squid beaks are often found inside whale stomachs when they’re opened up. Squid beaks are extremely hard to scratch or break, making them tougher and more resilient that virtually all metals and polymers.

Squids Come in Many Shapes and Sizes

Most squid species grow to about 24 inches long, though a number are far smaller. In the deep seas and oceans, giant squid can grow up to 43 feet long; the biggest ever found was 46 feet in length. Marine biologists suggest that they can grow bigger still, and that the only limits to their size is the available food supply. Because of such discoveries, some suggest that the ancient stories of giant squid attacking ships were not myths, but actual events!

Deep water squid live in perpetual darkness because sunlight cannot reach the bottom of the ocean. This is because water is a terrible reflector of light. Since even squid need light, and because the deep seas have none, some species have bioluminescent organs to help them hunt for food and find their way around. This means that you can see through their skin into their organs inside, which produce their own light, making them seem like creatures from another planet.

One of the little-known squid facts is that they have three hearts. This is because their bodies are very complex. Their two smaller hearts serve their gills, while the larger one pumps blood to the rest of their bodies, and all three are faintly greenish in color. These hearts are also surrounded by their renal sacks, which is a fancy way of saying that their hearts are actually located inside their excretory organs. This layout ensures that their hearts receive extra protection.

Squids Have the Largest Eyes of Any Animal

Compared to the size of its body, a squid’s eyes in general are very big. Giant squid, on the other hand, have the biggest eyes of any known animal in the world, even bigger than ostrich eyes. A typical giant squid eye measures some 10.62 inches across, which is roughly the size of a soccer ball. Since giant squid live only in the deep ocean where there’s no light, these eyes also come with their own light organs, meaning they literally glow in the dark.

Perhaps the most unusual thing about their eyes is that they change focus with their lenses. Squid eyes are protected by hard lenses, very much like the contact lenses worn by some people. If you remove these lenses, you can actually use them as magnifying glasses. When human eyes focus, we change the shape of our lenses, expanding and contracting our pupils. But when squid eyes focus, they change the position of their lenses in the same way that cameras and telescopes do.

Humboldt squid have an interesting defense mechanism they use to hide from predators and when they’re hunting prey – they turn blood-red. The reason for this is because the wavelength of light doesn’t travel too well in water, which is why sunlight doesn’t reach the ocean floor. The blood-red color is therefore virtually invisible underwater, at least until you’re right next to it. But if you’re unfortunate enough to be the Humboldt squid’s prey, it will be too late by the time you notice it.

Some Types of Squid Ink Can Get You High

Another of our squid facts is that some of these animals can make people very happy indeed. This is because some squid species can produce an ink which contains very high levels of dopamine. This is a neurochemical that targets our brains and creates feelings of euphoria. Dopamine also exists in illegal drugs and is what makes people high. It’s believed the ink also makes some fish high, making them easier to catch. Whether it also makes the squid happy is not yet known.

Squid males have the most unique penises in the world. The onykia even has a penis almost as long as its body (26 inches). The architeuthis species have penises which are covered by a flesh-eating enzyme. And they don’t always wait for a female squid – a human will do. Their touch causes extreme burns and requires surgery; sometimes even amputation. Some shallow-water males don’t have a dedicated penis, they instead have tentacles which do double duty when mating season comes along.

The Heteroteuthis Dispar Can Shoot Light

One of the most well-known squid facts is that they shoot black ink at predators in order to get away. The heteroteuthis dispar, better known as the odd bobtail, does it differently, however. Instead of ink, they produce bioluminescent mucous in their ink sacks. When threatened, they shoot out this light-producing snot, which blinds or confuses their predators. The result is a cloud of light that takes a while to dissipate, which is why this species is also called the fire shooter.

The Euprymna Scolopes Can Blend with Moonlight

A cousin of the heteroteuthis dispar is the euprymna scolopes, better known as the Hawaiian bobtail squid. Instead of shooting out light, this creature harvests bioluminescent bacteria. It does so by producing a sugar in its body which the bacteria love. Nocturnal creatures, they spend their days in shallow waters buried in sand, like octopi. On moonlit nights, they secrete the bacteria to help them blend with the silvery waters so they can hunt for food and hide from predators. 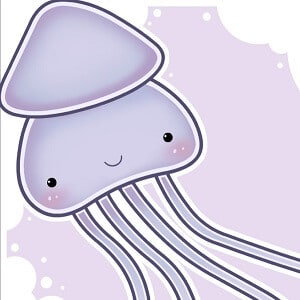 There are 304 known species of squid, but they are so diverse that we discover new ones all the time. They range from just a few inches long to as big as several feet, but can reach over 40 feet in length. While most squirt ink as a form of self-defense, others use light, and still others make themselves invisible through camouflage. It’s hard to tell them apart from cuttlefish, but you can tell squids apart from octopi because they have eight arms and two tentacles, while octopi have only eight arms.