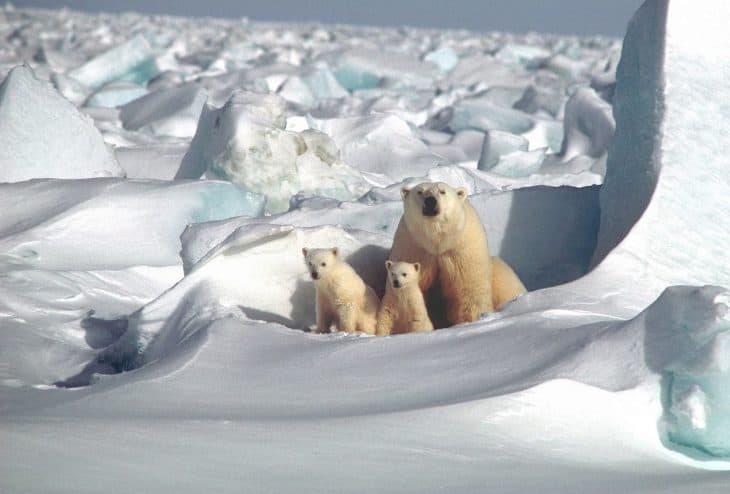 When you think of the Arctic, polar bears are probably one of the first things that come to mind. Throughout cultures, polar bears represent spiritual meanings of endurance, strength, and acceptance. We may think of polar bears as cute and fluffy-looking animals, but there’s so much more to discover with these sea ice bears. Whether you’re planning to see these majestic creatures up North or you might just want to know more about them, brace yourself for these amazing polar bear facts. 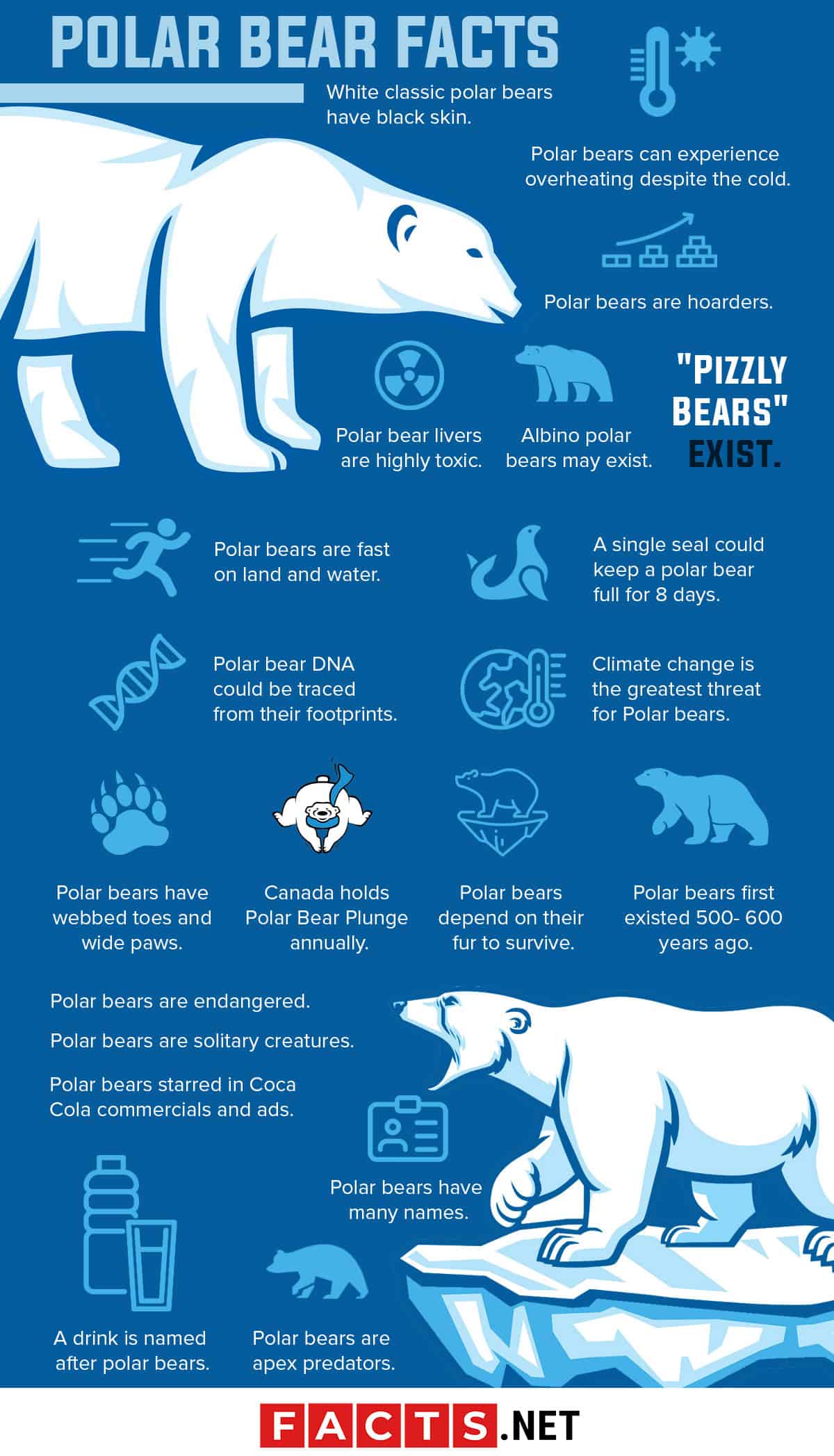 One of the less-known polar bear facts is that they are not white. Their appearance may suggest otherwise, but polar bears actually have colorless hair and hollow black skin.

Their hollow fur reflects light, which traps the sun’s heat, protecting them from the warmth and making the fur look white.

Polar bears can experience overheating despite the cold.

While polar bears can withstand -50°C temperatures in the Arctic, they become prone to overheating during summers above 20°C. Polar bears have very thick fur, which makes them sensitive to even the slightest changes in weather.

Polar bears are fast on land and water.

Polar bears may be seen lazing around in the snow but they can run for at least 40 km per hour. They are also called sea bears because they are excellent swimmers. They can swim at around 10 kilometers per hour. Given their habitat, this is one of the polar bear facts that just make perfect sense.

In 2006, scientists confirmed that a hybrid of grizzly and polar bears exists. This discovery came when a unique-looking bear was shot by a hunter in the Canadian Arctic.

According to the DNA results, the bear had a polar bear mother and a grizzly bear father. The hybrids are usually birthed by polar bears so they are most inept in Arctic habitats.

Since polar bears mostly eat seals, they have a lot of stored fat. The polar bear’s unique and special livers allow them to process all the Vitamin A and fats that they get. These nutrients get stored in their blubber which allows them to survive and endure the harsh cold.

However, the large amount of Vitamin A in their livers makes it unsafe for human consumption. As a result, indigenous peoples meticulously prepare polar bear meat, so no one could accidentally ingest their toxic livers.

Polar bears spend most of their life hunting and looking for food. However, since not all hunts are successful, they try to hoard as much food as they can. When they kill prey and seals, they often hide it in snow and come back for it whenever they starve.

A single seal could keep a polar bear full for 8 days.

One of the most interesting polar bear facts is that polar bears have huge appetites. The 121-pound adult ringed seal could provide a polar bear with the all fat it needs and stave off its hunger for more than a week. In a year, a single polar bear consumes around 43 seals.

Polar bear DNA could be traced from their footprints.

As technology evolves, science has stepped up its game, too. Innovative DNA technology has allowed scientists to isolate a polar bear’s footprint. Merely 2 scoops of snow footprint could reveal a polar bear’s age, subspecies, and even the kind of seal it has recently eaten. These polar bear facts are as interesting as they get!

Climate change is the greatest threat for Polar bears.

The effects of climate change gravely endanger polar bears because they depend on ice to survive. With global warming, their hunting season is shortened. Without these sea-ice platforms, polar bears will have a hard time hunting seals and sea prey.

They could end up stranded in the water for days, eventually drowning or starving to death. Studies reveal that the Arctic temperatures rise twice as fast as the normal global average. Because of this, sea ice diminishes at a pace of 4% per decade.

Although there is no reported case yet of real-life albino polar bears, scientists claim that they could exist as most animal species have albino counterparts. However, they may have several disadvantages. Their white skin could prevent keeping the heat, unlike regular polar bears which enable heat-trapping for warmth. Albino sea bears could have poor eyesight which would be a challenge when they hunt.

Compared to other bears, polar bears developed large paws specifically used for swimming. Polar bears use their hind feet to steer, with their front paws for paddling. The webbed toes and paw pads prevent them from slipping on thin ice. How’s that for interesting polar bear facts?

Polar bears have many names.

These adorable Arctic bears are called many names depending on their home origin. The Inuit people residing in the Canadian Arctic refer to polar bears as nanuq, which means animals worthy of respect. Meanwhile, Russia calls them medved, which translates to White Bear. In Denmark and Norway, locals refer to them as isbjorn, which means Ice Bear.

Polar bears depend on their fur to survive.

Their fur prevents them from freezing as provides their bodies with the right insulation to survive the Arctic cold. Polar bears keep their fur clean by rolling in the snow, as wet and dirty matted furs prevent them from getting the warmth that they need.

With the melting of sea ice and the dangers of industrial oils and pollution affecting the Arctic, the IUCN has classified polar bears as a vulnerable species. Without concrete action, our ice bears could possibly face extinction.

A drink is named after polar bears.

A polar bear shot is a drink that’s perfect for winter parties and events. It’s a mixture of peppermint schnapps and crème de cacao liquor for that to keep you warm during the cold winter. Add a shot of vodka for an extra-exciting kick. Who’s in for more polar bear facts like this?

Research shows that the oldest confirmed fossils of polar bears come from Northern Norway and Svalbard. According to this data, the species emerged before the start of the last Ice Age.

Coca Cola’s dedication to preserving the environment has led them to use polar bears as commercial and advertisement icons to draw attention to the current plight that polar bears are facing.

With the Arctic Home Project, the soda cans swapped its iconic red design for a white background featuring a mother polar bear with cubs in the Arctic. The company has since donated $2 million to the World Wildlife Fund to support the cause of saving our ice bears.

Canada holds an annual event called Polar Bear Plunge to celebrate New Year’s Day. In the US, it’s usually held during winter to raise funds for charitable causes and organizations.

Aside from their 2 to 3 years of training with their mother polar bears, they mostly spend their lifetime in solitary. They mate only for a few days in a year and they go on their own way. It’s one of the sad polar bear facts you probably never expected.

Most bear species hibernate towards the winter. However, polar bears are exempt from this as they spend winters hunting and gathering the abundance of prey during this season.

A polar bear's nostril closes when they swim.

You might see a green polar bear in warmer places.

In warmer temperatures, polar bear fur can turn into a verdant hue. This change in color occurs due to algae growing in their fur, which turns it from the usual white into a pale, sickly green.

A zoo in Winnipeg, Canada is known for having polar bears that have sparkly and glitter-like poop. Zookeepers feed the polar bears non-toxic glitter to monitor health issues, track hormones, and identify the polar bears with these problems.

Penguins and polar bears can never meet in their lifetime.

It may sound like one of the more unlikely polar bear facts, since these animals usually appear together in cartoons or games. However, despite both animals living in icy habitats, these two species will never cross paths as they live on opposite sides of the Earth. Penguins live within the Southern Hemisphere while polar bears reside exclusively in the Arctic.

Polar bears were held captive in the Middle Ages.

In the 1200s, polar bears served as gifts to European royalty from Viking traders. Henry III even kept a polar bear chained and muzzled in London, occasionally letting it out to swim and catch fish in the river of Thames.

A single paw swipe from a polar bear could kill its prey.

They have large paws that could reach up to 30 cm in diameter. Functionally, these paws have the same weight and material as snowshoes. With a single swipe, its prey could be killed due to the force of the impact.

In the popular sandbox game Minecraft, polar bears are designed as neutral mobs that won’t attack you unless provoked.

The Arctic is the polar bear's only home.

With the warming of the planet and the melting of the ice in the Arctic, our furry polar friends might just be an extinct tale we can only share with the future generations. This is easily one of the polar bear facts we need to keep in mind.