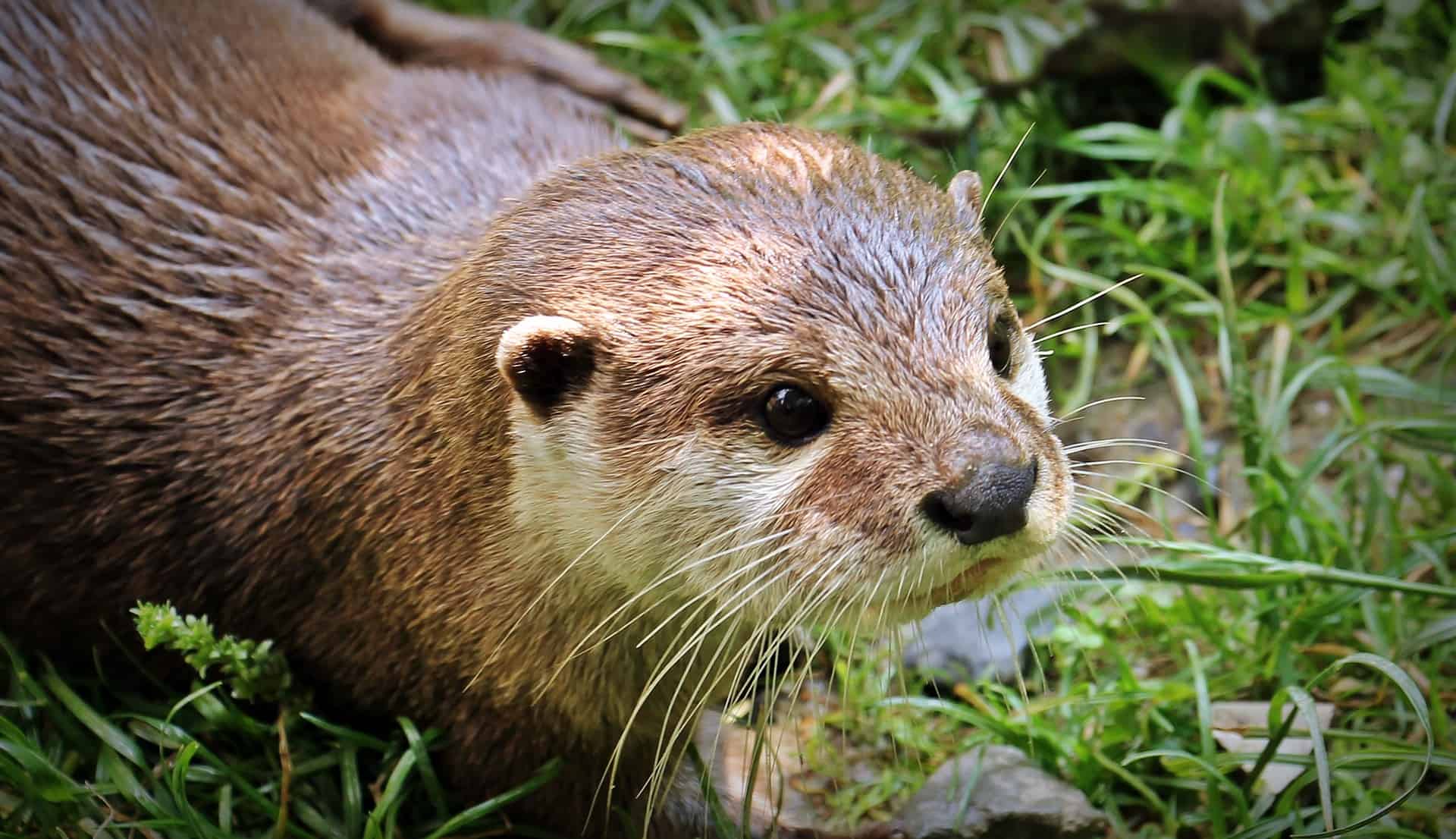 Table of Contents
01 Otters Are Found near Water Worldwide
02 Otters Are Living Fossils as They Lived 30 Million Years Ago
03 Despite What Many People Think, Otters Are Carnivores
04 Not Ones for Dieting, Otters Eat 25% of Their Bodyweight Daily
05 Otters Are Designed for Both Water and Land
06 Like Torpedoes in Water, Otters Are Excellent Swimmers
07 Otters Don’t Have Blubber, But Their Fur Coats Are the Ideal Insulation
08 An Otter’s Tail is Both a Rudder and a Weapon
09 Otters Don’t All Share the Same Mating Season
10 Otters Are Chatterboxes and Make Lots of Noise
11 Otters Are Highly Sociable Creatures
12 Crafty Critters: Otters Make and Use Tools
13 Otters Are Related to Skunks
14 Catching a Tan? Otters Sunbathe During the Day
15 Otters Have Been Seen Engaging in Humanlike Behavior
16 There Are Many Collective Nouns for Otters
17 Otters Are Endangered Because Of Humans
18 Otters Outfox People in Japanese Folklore
19 Some Otters Are Domesticated as Pets
20 Otter Facts – Facts about Otters Summary
Quick Facts
Essential Facts
Interesting Facts

Otters Are Found near Water Worldwide

When it comes to habitat, otter facts reveal that these animals live all over the world. Otters can be found on almost every continent, with Australia and Antarctica being the only two exceptions. Most otters are found near freshwater, although they are also known to enjoy the oceans’ saltwater. In addition, otters tend to prefer cooler waters, but they can be found on sandy landscapes near warmer waters.

Otters Are Living Fossils as They Lived 30 Million Years Ago

Scientific evidence reveals that otters have been living on this planet for 30 million years. This is one of the more fascinating facts when it comes to the evolution of these animals.

Despite What Many People Think, Otters Are Carnivores

Many people mistakenly believe that otters are herbivores, feeding on plants and berries. However, otters are in fact carnivorous. An otter’s diet consists primarily of fish. Otters also eat other marine life, such as plankton, crayfish and crabs. In addition to sea life, otters hunt small amphibians (like frogs), birds, and sometimes even small mammals.

Not Ones for Dieting, Otters Eat 25% of Their Bodyweight Daily

One of the most astonishing otter facts is how much these animals eat on a daily basis. Otters are known to eat the equivalent of 15 to 25% of their bodyweight daily. This means that a great deal of time is spent trying to find sufficient food for survival. Otters can spend up to 5 hours every day looking for food to satisfy their appetites.

Otters Are Designed for Both Water and Land

The anatomy of the otter is particularly well suited to its lifestyle. Otters spend time both in water and on land, and their bodies are uniquely designed for this. They are able to move easily in both environments. One feature that illustrates this perfectly is their feet. Otters have four strong webbed feet, each with with sharp claws. These feet enable them to move with strength, stability and speed both in the water and on land.

One of the most impressive otter features is undeniably their incredible swimming skills. Otters can hold their breath and remain under water for up to 4 minutes. In addition, otters are known to dive as deep as 300 feet when hunting for food.

Otters Don’t Have Blubber, But Their Fur Coats Are the Ideal Insulation

Otters are able to withstand water that is near freezing in temperature. This is due to their thick fur coats. But it’s not just their thick fur that keeps them warm. Under an otter’s fur is an additional layer of thin hairs. These small hairs trap air which also keeps the otter warm and insulated in harsh conditions. This is particularly important for otters because they don’t have an insulating layer of blubber like most other marine mammals.

An Otter’s Tail is Both a Rudder and a Weapon

Otters have particularly muscular tails that can reach up to one foot in length. As a general guide, an otter’s tail constitutes about one third of its body length. The only exception is sea otters as their tails are shorter and less muscular. Otters’ tails are used as navigational tools, guiding and steering otters in the water. However, one of the lesser known otter facts is that otters also use their tail as weapons. In this case, the weapon is used for defense and protection.

There are several interesting facts pertaining to the reproduction habits of otters. Otters are able to reproduce from the age of 3 to 6 years. Not all otters share the same mating season. The timing of the season depends on the region in which the otters live. In general, female otters give birth in early spring. Each female will give birth to a few young in a burrow. She will look after her offspring in the burrow until they are 4 to 10 months old. At this point the young otters are able to fend for themselves.

Otters Are Chatterboxes and Make Lots of Noise

Otters are known to be quite chatty creatures. In fact, a large group of otters can create quite a chaotic sounding noise. However, despite the cacophony, otters seem to be able to discern the sounds made by the otters with which they identify. These sounds can take the form of squeaks, growls, grunts and chirps.

Otter facts about social hierarchy reveal that these animals have a very complex social structure. These very sociable animals are often seen playing together. Otters play together both on land and in the water. Some otters have even been seen to make waterslides so that they can enjoy sliding down into the water below.

Otters have many interesting abilities. They are even able to create and use use tools. In this way, otters are similar to other animals such as apes, beavers and monkeys. Some go as far as to say that otters are some of the most highly skilled animals in the world. Amongst other skills, otters use stones to break open shells and pry abalones off rocks.

Otters Are Related to Skunks

Some of the most surprising otter facts pertain to the otter’s relatives. Even though otters are frequently mistaken for beavers, these two animals are not actually related at all. Otters are, however, closely related to the badger, mink and ferret. In addition, skunks and otters are distantly related.

Catching a Tan? Otters Sunbathe During the Day

Perhaps one of the more surprising otter facts is that these creatures are very active during the night. During daytime hours, otters prefer the lazier option of basking in the sun.

Otters Have Been Seen Engaging in Humanlike Behavior

Several photographers have captured images of otters engaging in humanlike behaviors. One such example is that otters are frequently seen holding hands.

There Are Many Collective Nouns for Otters

One of the most intriguing otter facts relating to grammar is the collective nouns for otters. A group of otters can be referred to using several terms, such as a family, bevy, romp, or lodge. However, a group of otters that is in the water is called a raft of otters.

Otters Are Endangered Because Of Humans

The most unfortunate of all otter facts is that these adorable creatures are endangered because of human actions. Otters have been hunted since at least the 1700s according to historic documentation. Several otter species have been heavily hunted for their pelts and, as a result, only have very small populations remaining. In addition to threats from hunting, otters are also affected by global warming. The extent to which global warming is threatening otters depends on the species and their specific location.

One of the lesser known otter facts is that otters appear in Japanese folklore. In these tales, otters are referred to as kawauso. They are depicted as being very intelligent, and often outsmart humans in the tales.

Some Otters Are Domesticated as Pets

One of the strangest otter facts is that some people have tamed otters to be pets. Although this is not legal everywhere in the world, some places do give permits to people wishing to keep an otter as a pet. There are some challenges when it comes to having an otter as a pet. Otters need access to lots of water and plenty of fish. They are also nocturnal, sometimes bite, and produce a pungent smell which they spray much like skunks. 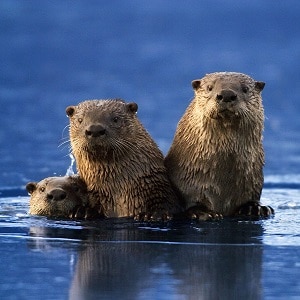 Otters are carnivorous marine mammals. They are perfectly built to swim, hunt, use tools and keep warm. They are noisy and sociable, and have even been seen exhibiting humanlike behaviors. These intelligent animals are sometimes domesticated. However, otters are endangered due to hunting and global warming.