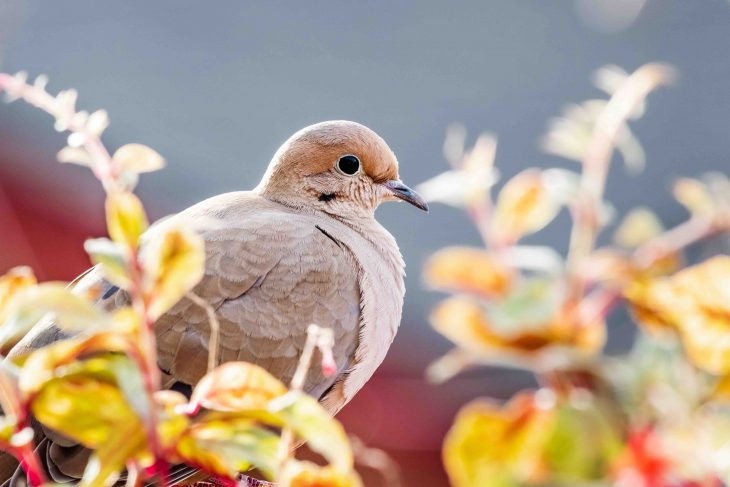 Quick Facts
Essential Facts
Interesting Facts
Table of Contents
01 The mourning dove has several other names.
02 Rain doves have a distinctive appearance.
03 Their feathers may also change color depending on the environment.
04 They also have unique calls of their own.
05 The mourning dove and its various breeds live all over the Americas.
06 They also have preferences when it comes to habitat.
07 Rain doves tend to mate for life.
08 Mourning doves usually feed on seeds.
09 Several predators prey on the rain dove.
10 They also suffer from certain parasites and diseases.

The mourning dove has several other names.

There’s the American mourning dove, as well as the rain dove. Colloquially, they’re also known as the turtle dove, though, they aren’t actually turtle doves. Once, they also had the names of Carolina pigeon and Carolina turtledove.

Rain doves have a distinctive appearance.

First, they have round heads, with broad and elliptical wings. They also have long and tapered tails, from which their scientific name comes. Specifically, macroura, derived from the Greek words for large and tail. The rain dove’s feet have a typical arrangement for perching, with three toes forward and one reversed. They also have short legs, usually with red coloring. Finally, they have short beaks with a dark color ranging from brown to black.

Their feathers may also change color depending on the environment.

This actually surprised scientists, as they hadn’t thought it was possible for feathers to change color as quickly as mourning doves do. Studies from 2010, however, show that their feathers adjust their arrangement at the microscopic level, in response to changes in the moisture of the air. This allows the dove’s body to adjust the brightness of its feathers as needed.

They also have unique calls of their own.

Strangely enough, their mating calls have a similarity to those that owls use. Scientists differentiate them using a grating sound that doves make before making a call. Other calls that doves use include one that signals a mate to a possible nesting site, as well as a call warning them of danger nearby. The wings of a mourning dove also make a unique whistling sound while flying that humans have difficulty hearing.

The mourning dove and its various breeds live all over the Americas.

They also have preferences when it comes to habitat.

For one thing, the doves tend to avoid swamps and thick forests, preferring open or semi-open areas. Those include prairies and grasslands, as well as lightly-forested woodland areas. The doves have also long since become comfortable in the presence of humans, so they also live in farmland or even in suburban areas.

Once mated, the male looks for possible nesting spots, with the female making the final decision. The male then gathers building materials for the nest, which the female puts together. After mating, the female lays two eggs, which take about two weeks before hatching. However, doves mate several times in a single season, producing up to 12 eggs on average. The hatchlings themselves take just over a month to reach adulthood. Scientists have since discovered that such rapid breeding resulted from high mortality rates in the wild, with an estimated 70% of hatchlings dying before adulthood.

Seeds actually make up 99% of their diet, preferably pine nuts, as well as corn, sesame, and wheat seeds among others. Rarely, though, the doves will eat insects and even snails to supplement their diet. They also swallow sand or even small stones, which stay in their stomachs, and grinding any food the birds eat, helps with their digestion.

Raptors like eagles and hawks make up the mourning dove’s most common predators. Corvids like crows and ravens also prey on hatchlings, as do cats and snakes.

They also suffer from certain parasites and diseases.

The most common parasites include lice, mites, nematodes, and even tapeworms. They also especially suffer from Trichomonas gallinae, which lives in the bird’s mouth. Over time, the parasite will cause tumors in the bird’s mouth and throat, making it impossible for the bird to eat. This eventually causes them to just starve to death. Mourning doves also suffer from avian poxes, usually caught from eating contaminated insects.