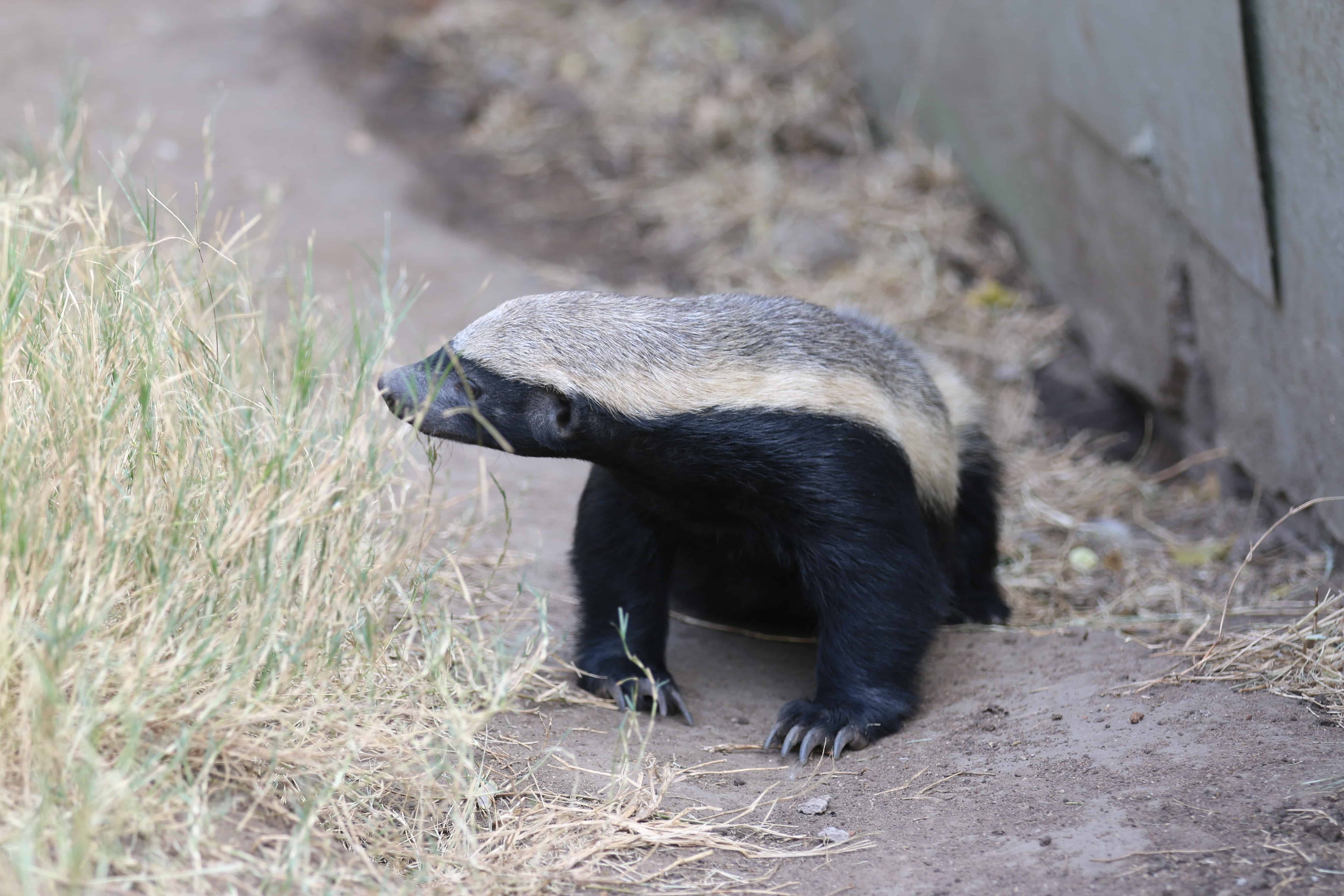 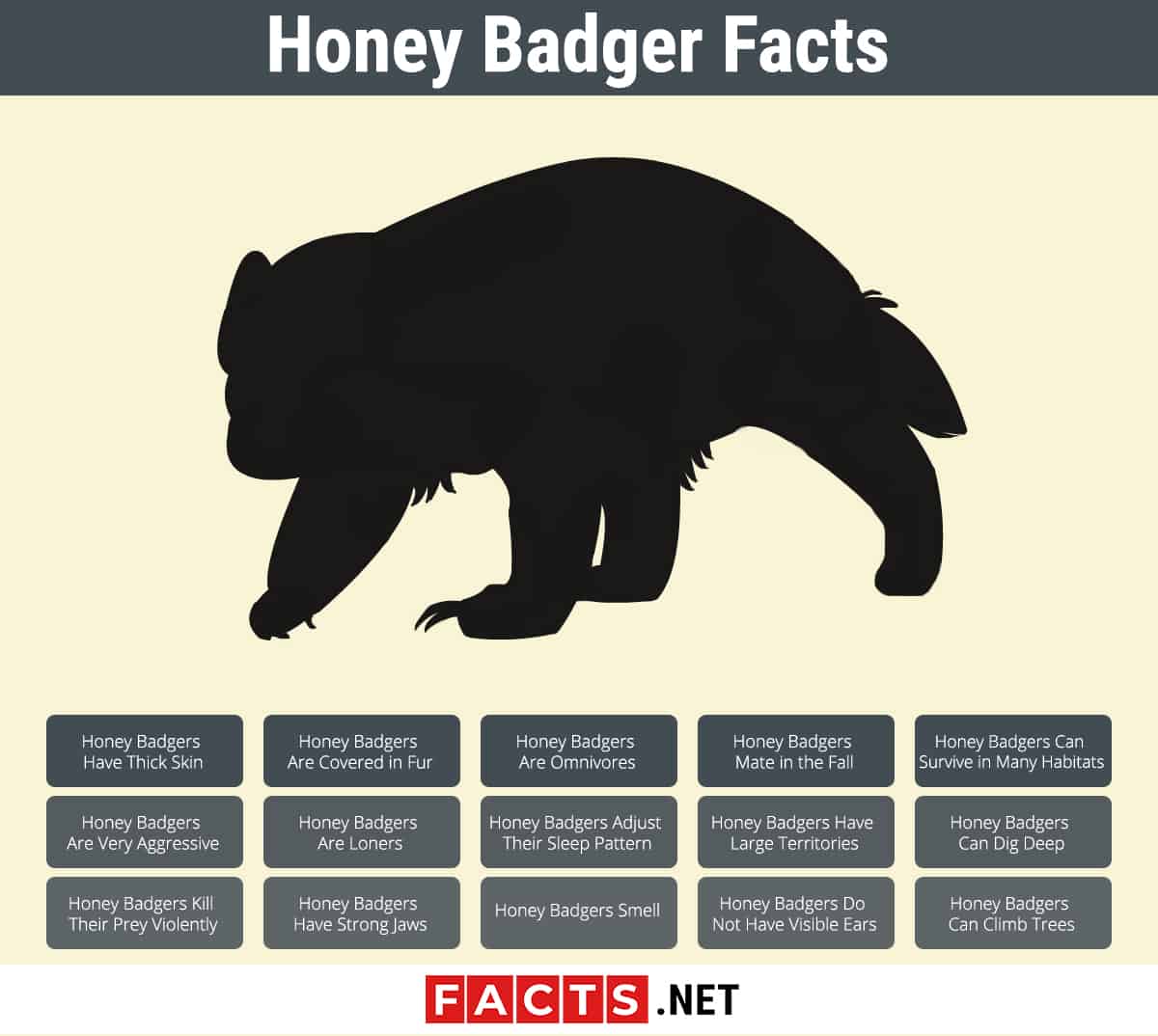 Honey badger facts show that honey badgers have incredibly thick skin. The skin is so thick that it cannot be pierced with arrows, spears or knives. Even a weapon as sharp as a machete cannot completely cut through the skin. The skin is also very loose which helps them to turn around when being attacked and fight back. The only safe place to grab a honey badger is on the back of the neck.

Honey Badgers Are Covered in Fur

Honey badgers have a very thick and coarse coat of hair. This thick hair helps to protect the honey badger from attacks, including bee stings. The top of the body is covered by a light colored stripe that runs from the head to the tail. The rest of a honey badger’s body is usually black or dark brown.

Honey badgers eat both plants and meat. Most of their diet consists of honey, honey bee larvae, snakes, eggs, tortoises, birds, berries and roots. A honey badger will eat almost anything that it can get hold of. It will also take food from other animals or eat any food it finds ling around.

Honey Badgers Mate in the Fall

While honey badgers can mate any time of the year, they tend to choose to do so in September or October. A female honey badger is pregnant for about seven weeks and gives birth to either one or two kits (baby honey badgers). Mating season is typically the only time that honey badgers will travel or hunt together.

Honey Badgers Can Survive in Many Habitats

Honey badgers are not afraid to fight against other animals, even if the other animal is much bigger. They have been labeled as the World’s Most Fearless Creature by the Guinness Book of World Records. Because of its aggressiveness, it doesn’t lose many fights, but its main predators are hyenas, lions, leopards, pythons and humans. Humans have been known to kill the honey badger if it continuously attacks their bee farms or livestock.

Honey badgers typically only get together to mate. Other than that, they roam and search for food alone. During mating season, two honey badgers may hunt for food together, but not always. The one main exception to this rule is honey badger babies. They will stay with their mother for as long as possible before going off on their own.

Honey badgers can hunt and sleep whenever they see fit, but will adjust their sleep schedules if they need to. In heavily populated areas, honey badgers will become nocturnal to avoid human contact. Honey badgers sleep in a curled position that protects their face and stomach.

A male honey badger will call a 200 square mile area home, on average. Females tend to stick to smaller areas, usually around 50 square miles. Honey badgers are losing more and more land to development each year, and their population is decreasing because of this.

Honey badgers are able to dig very deep very quickly thanks to their large paws and strong arms. They use this talent to quickly hide in the dirt if necessary, or to dig a burrow to sleep in. They can dig a hole big enough to fit their entire body into in just a few minutes.

Honey badgers have been known to castrate their prey. They will then patiently wait for their victim to severely weaken or even bleed out before they begin to eat them. Honey badgers also drink blood as a main source of water.

A honey badger’s jaw is so strong that it can almost never be dislocated. If a honey badger bites onto something, there is not much that can be done to force it to let go. Because of this strength though a honey badger has limited jaw movement.

Honey Badgers Do Not Have Visible Ears

There are no visible ears on a honey badger’s head. Instead, their ears are tucked away within the thick skin that is on the back of their head. Honey badgers have great hearing, a strong sense of smell and can see very well in the dark, helping them to hunt their prey at night.

Honey badgers can chase their prey just about anywhere, including up trees. Honey badgers can easily climb trees, reaching some of the top branches if necessary to reach birds or bee hives, or to chase another animal. 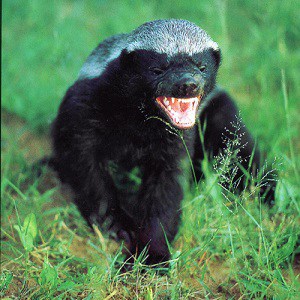 Honey badger facts show how this aggressive animal is protected from predators, while having the capabilities to capture almost any prey that it desires. The animal tends to hunt and live alone, but has been forced to adjust to having humans living nearby. The honey badger has some unique traits that make it the tough mammal that it is.