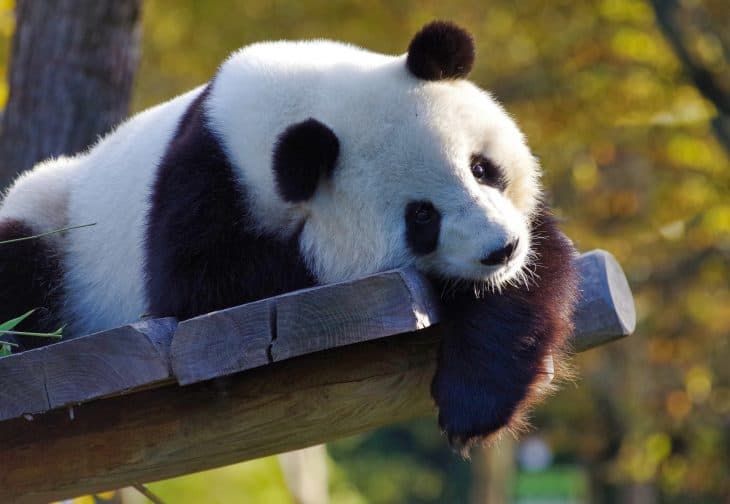 Many think that giant pandas have cute and chubby faces, but giant panda facts show that the roundness in their face is the result of their large cheek muscles. Their cheek and jaw muscles need to be strong enough to bite through thick bamboo stalks, which they can do with ease. It can be difficult for humans to cut through bamboo, even with an ax.

Giant pandas can spend anywhere from 14 to 16 hours a day eating bamboo. Unlike other types of bears, pandas do not hibernate because bamboo does not allow them to build up enough fat reserves to get through a winter season. Much of the food that they eat is not digested. A giant panda can produce over 60 pounds of droppings in a day.

There are only about 1,000 pandas left in the world. Their biggest threats are habitat loss and poaching. Scientists are hoping to increase the number of pandas to at least 5,000 in the next 10 years.

Female Pandas Are Fertile Only a Few Days a Year

Giant panda facts reveal that the female giant panda only ovulates once a year, leaving her fertile for just a few short days. Once pregnant, gestation lasts about five months. This can vary because the cub will only begin to grow if the mother eats enough food. Baby pandas are very small, about the size of a small water bottle. They have pink skin, white hair and closed eyes. After a month the baby has their traditional spots and after another few weeks their eyes open. A baby panda will stay with its mother for two years.

Due to their large size, pandas are usually safe in the wild. Snow leopards might prey on smaller pandas or cubs. A giant panda’s biggest threat comes from poaching. A panda fur can bring in anywhere from 60 to 100,000 dollars on the illegal trade market.

A giant panda’s throat has a special lining that helps to protect the bear from bamboo splinters. They have also over time evolved a unique thumb-like appendage which helps them to easily hold onto bamboo stalks. This is not technically a thumb, but rather a modified wrist bone.

Giant Pandas Are Difficult to Keep in Captivity

There are only around 240 captive pandas in the whole world, and most are in China. All of these pandas are part of a breeding program run by scientists to help boost the panda population. Giant pandas cost five times more than other large animals, such as elephants, to feed and care for in captivity.

Giant panda facts show that these animals need a large amount of territory to survive. One panda alone needs four square miles to live in so that there is enough food and resources for it. A pair of breeding pandas need close to eleven square miles. During the mating process, the female panda will eventually evict the male and raise the cub alone.

A giant panda is white with black accents. Their fur is surprisingly thick and course. Pandas can sometimes be seen rolling down hills. While this might partly be for fun, it is also to dislodge twigs and debris that is caught in their fur. The skin underneath the fur matches its color, with the skin under the black patches being black and the skin underneath the white being a light pink tone.

Most members of the bear family communicate via facial expressions. Giant pandas, however, stare at opponents with their head down when they want to intimidate them. Scientists think that they may do this because their black ears look like a second pair of eyes glaring at their opponent.

A Chinese legend suggests that pandas were once completely white. A small girl tried to save a panda that was being attacked by a leopard. The leopard then killed the girl instead, and spared the panda. The pandas came to her funeral with armbands of black ashes. As they comforted each other through hugs and wiped their tears away, the ashes left their well-known markings behind.

Giant Pandas Can Be Violent

Humans have built on much of the giant panda’s natural habitat. For this reason, humans can sometimes come into close contact with pandas. While attacks are rare, a giant panda may well attack a human if it feels threatened.

President Nixon Was Given Pandas as a Gift

When President Nixon visited China in 1972 he was given two pandas as a gift by the Chinese leader Chairman Mao. The pandas were placed in Washington’s National Zoo, where they were visited by more than a million people in their first year.

Giant pandas are slow runners due to their large size, but they are very capable of getting around. They are skilled tree-climbers and efficient swimmers. They may climb trees for refuge and their paws give them the powerful grip that they need.

Giant Pandas Were Once Hunted Legally

The Chinese believed that the pelt of a giant panda would provide magical protection against evil spirits. Laws were eventually passed that made hunting pandas illegal, but these were initially poorly enforced. Today the laws are strictly followed to try and save the species. 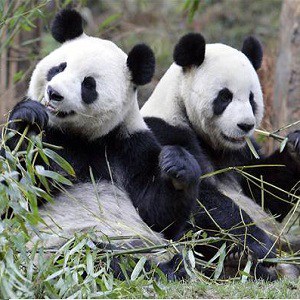 Giant panda facts tell about this animal’s large size and its eating habits. They also explain the bear’s reproduction cycles, and the extensive territory that each giant panda needs. We discover the main reasons the species is endangered, and the actions that are being taken to save the species.