The amazing bald eagle can fly up to 10,000 feet high. They soar high and the ability to lock its wings in certain positions helps them soar through the strong and stormy winds. This special trait of an eagle often becomes a symbol of strength and courage. So let’s find out more about them with these bald eagle facts. 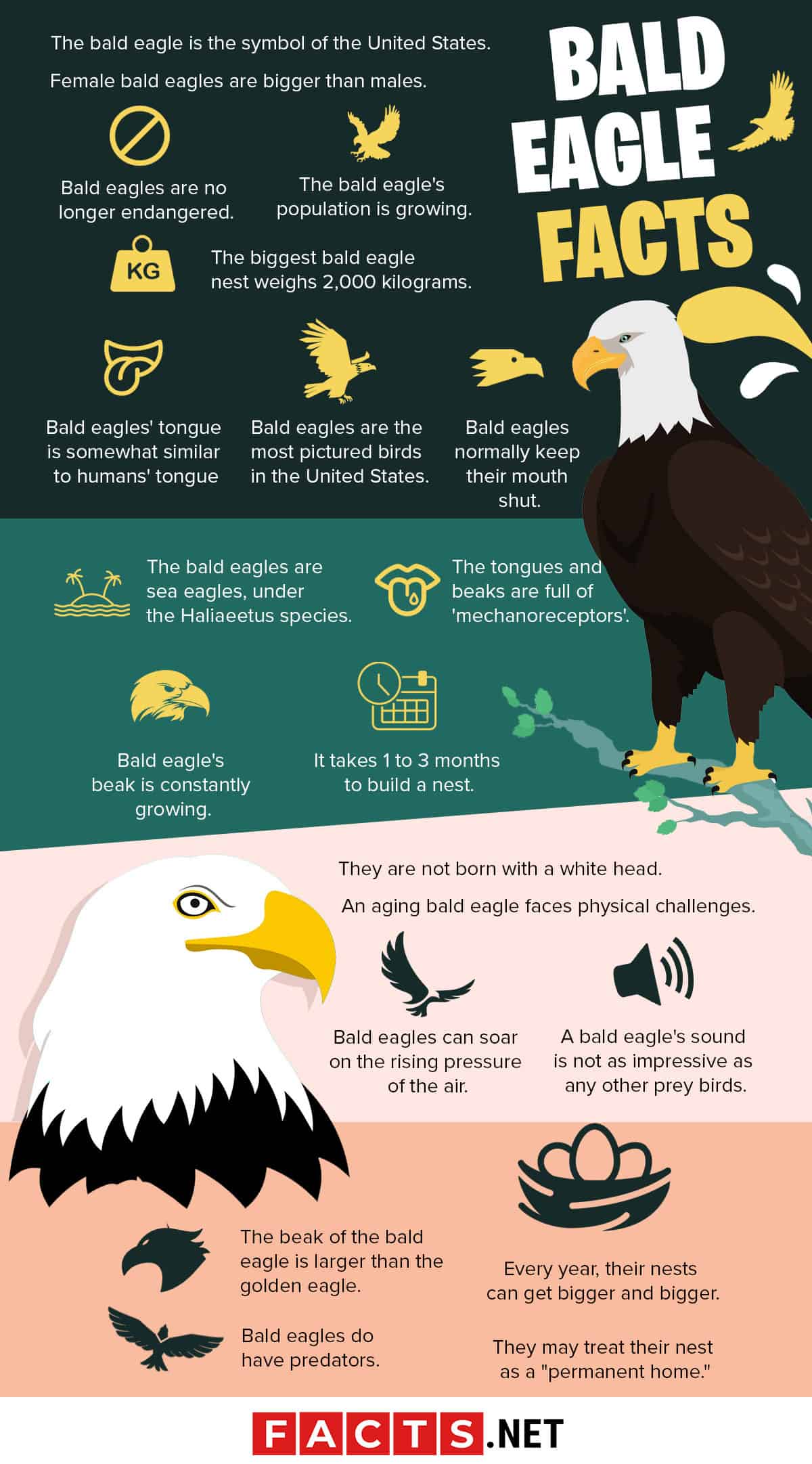 The bald eagle is the symbol of the United States.

Aside from being the country’s national bird, the bald eagle is also the symbol of the United States since 1782. The bald eagle has a white head, hooked-shaped yellow beak, and a brown body with yellow feet and sharp claws.

Bald eagles are the most pictured birds in the United States.

In the United States, bald eagle’s images appear in many government institutions, including official documents, making it the most pictured bird in the country.

Based on the record, the biggest bald eagle nest was in Florida, United States. It was more than 8 feet wide and 15 feet deep. In 1963, the nest was studied and found to have an estimated weight of about 2,000 kilograms.

The bald eagles are sea eagles, under the Haliaeetus species.

Bald eagles are no longer endangered.

Although bald eagles are no longer an endangered species, they are still heavily protected under several federal laws and regulations. The bald eagle’s nest and roost sites are also well-protected.

The bald eagle's population is growing.

Compared to the late 20th century where bald eagles almost became extinct, today, its population rose from 400+ (late 20th century) to 14,000 to 15,000 nesting pairs around the United States.

Their tongue is pinkish, quite narrow, and flexible. Although their tongue is shorter than ours, it helps them to lift, pull, and swallow food just like we do. It fits nicely in their beaks and it is also short enough that eagles can’t easily bite it.

Bald eagles have two spikes or barb at the rear part of their tongue. This helps the eagle to pull the food back to their throat. This feature is very common to bird tongues. Most of the time eagles keep their mouth shut except when they are feeling hot and nervous.

The tongues and beaks are full of 'mechanoreceptors'.

Although the bald eagle’s tongue may look “ordinary,” their tongues and beaks are full of ‘mechanoreceptors’. It is a sensory cell that reacts to distortion, vibration, pressure, texture, and temperature. These are important to eagles especially when they are eating prey with hard bones.

Just like our fingernails, bald eagle’s beak is made from keratin. It is constantly growing although takes a long time. The eagles commonly scraped their beaks to rocks and tree limbs after eating to clean it as well as to sharpen it.

Generally, it takes 1 to 3 months for the bald eagles to build a nest. They stack and interweave branches and sticks to build a large nest. The center of their nest is made with soft material such as grass, moss, feathers, and twigs.

Every year, their nests can get bigger and bigger.

For each breeding season occurs, bald eagles add up their materials so that they may increase the size of their nests which can grow by a foot in height and width each year.

They may treat their nest as a "permanent home."

Eagles, in general, have strong nest site loyalty. In other words, the love to return to the same nest or their nesting territory every year. Some may opt to build a new nest in another place if the previous territory is unproductive.

They are not born with a white head.

The young bald eagle doesn’t have a white head but has brown-black color heads. Aside from it, these juvenile eagles have white feathers in their bellies in their second year. Their color will be slowly changed as they grow and will achieve its iconic color within four to five years of age.

When bald eagles get old, their long and sharp beak becomes dull and bent. This gives them a hard time to tear their food. Aside from that, the feathers in their chest are getting thicker making it difficult for them to soar high.

Bald eagles can soar on the rising pressure of the air.

Bald eagles are powerful fliers. In fact, they can soar on thermal convection currents (a column of rising air in the lower altitudes of Earth’s atmosphere).

A bald eagle's sound is not as impressive as any other prey birds.

Although bald eagle looks stronger and intimidating, their sound is not as fierce as their appearance. In fact, it sounds like more of high-pitched whistling notes or a giggle. Hollywood dubs the bald eagle’s sound with a red-tailed hawk.

Bald eagles do have predators.

Although the bald eagles are on top of the food chain, immature eagles, chicks, eggs, and injured bald eagles are subject to a range of predators such as raccoons, wolverines, bobcats, black bears, ravens, hawks, Black-billed magpies, gulls, and owls.

The beak of the bald eagle is larger than the golden eagle.

Bald eagles and golden eagles have almost the same weight.

The average weight of bald eagles ranges between 3 to 6.3 kilograms. Meanwhile, golden eagles weigh pretty much the same (3 to 7 kilograms) – the Steller’s sea eagle is around 6.2 to 9.5 kilograms and harpy eagles between 4 to 5 kilograms.

Most of their bones don’t have anything but air, thus it is not heavy. Although their bones are hollow and lightweight, they are strong because of the perfect cross-crossing structure of their bones.

The bald eagle's feathers are about 7,000 pieces.

The bald eagle’s feathers are twice as much as the weight of their bones. It consists of keratin which is similar to human nails and hair. These feathers are in thick layers that block the air to protect the eagle from rain and cold weather.

Bald eagles can carry four to five pounds of weight.

Bald eagles can pick up and carry around four to five pounds and can fly off with it. Although there were old rumors about bald eagles carrying off babies or small kids, and none of those has been proven or documented.

The eagle’s eyes can see up to five times farther than the average human eye. In other words, they have 20/5 vision making them among the strongest eyes in the animal kingdom.

The average body temperature of a bald eagle is 41 degrees Celsius.

Aside from their thick feathers, their hot body temperature helps them to dwell in cold places. If the weather is warm they cool themselves by resting shades, panting, or keeping their wings away from their body.

Killing a bald eagle in the United States would cause you $5,000 and imprisonment.

Since eagle soars higher than any other bird, some believe it is like a connection of mankind to the divine. Others believed that the appearance of an eagle gives courage and freedom.

The Bald Eagle State Park is in Pennsylvania.

The Bald Eagle State Park in Pennsylvania is a 2390 hectares state park in Howard, Liberty, and Marion townships in Centre County. Inside the state park, you can find the Foster Joseph Sayers Reservoir and the Bald Eagle Creek along with beautiful streams and spanning over 500 hectares.

The Bald Eagle Creek is a navigable tributary.

The Bald Eagle Creek of the Bald Eagle State Park of Pennsylvania is one of the few navigable tributaries (a stream that flows into a larger stream) of the West Branch Susquehanna River in Centre County.