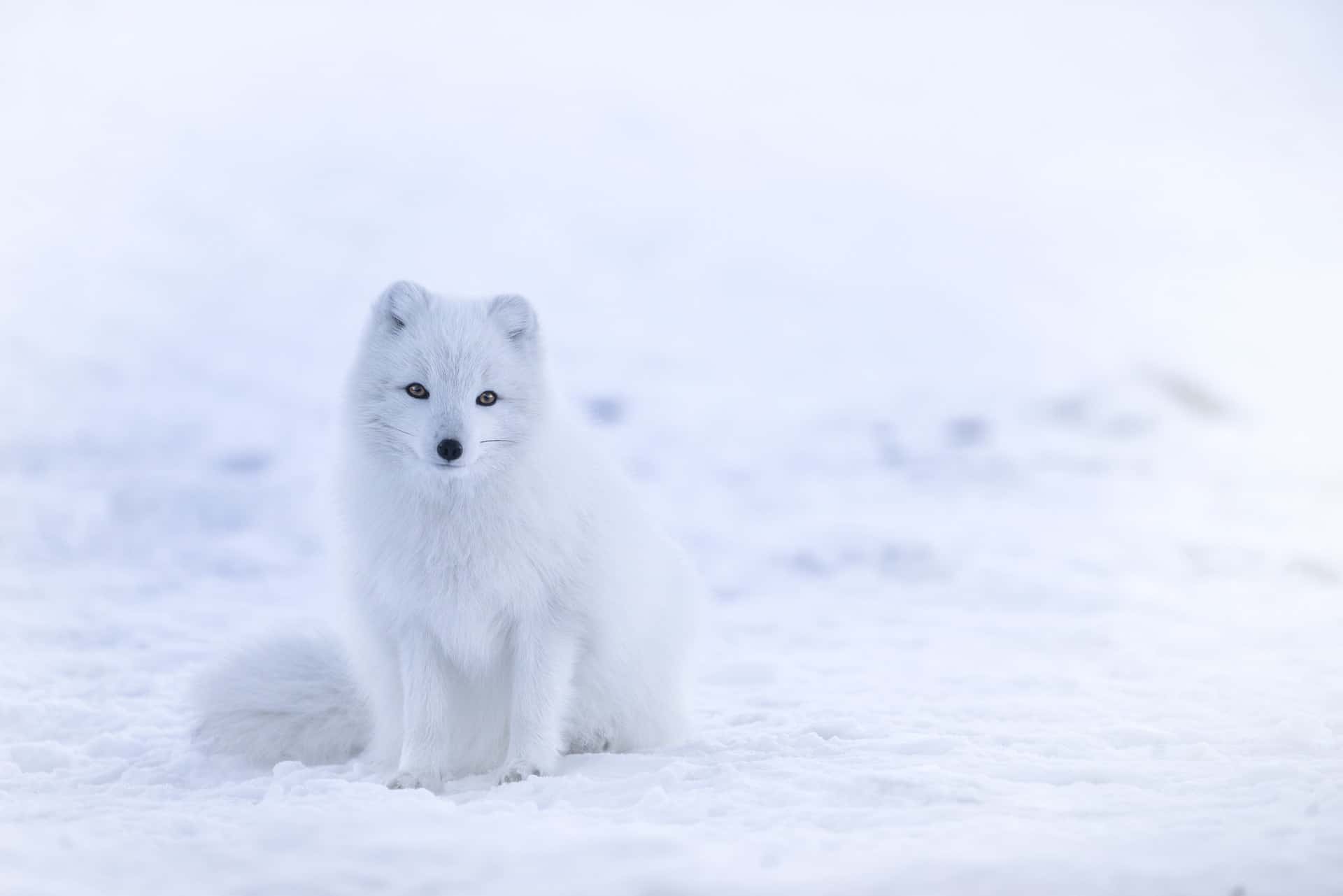 Arctic fox facts tell us that this animal has a high population. It is native to the Arctic regions of the Northern Hemisphere and is most commonly found in colder climates, including parts of Canada, Alaska, Northern Asia and Europe.

It is also found in Iceland, where it is the only native land mammal. Because of its preferred habitat and distinct appearance, it is also known as the snow fox or the white fox. The population ranges in the hundreds of thousands worldwide and fluctuates on a regional basis with the availability of food supplies.

The Arctic fox is built for colder climates. It has a thick winter fur that serves as a warm coat. The Arctic fox has the warmest fur of all known mammals. Without this thick and warm fur, the animal may not be able to survive in the harsh cold temperatures of its habitat, which in some areas can reach below -40 degrees Fahrenheit.

One of the most interesting Arctic fox facts is that this warm fur has the ability to change colour in order to adapt to the surroundings. During the winter, the fur remains white to allow the animal to hide in snowy banks, and in the summer, it turns brown to blend in with the landscape.

They were once hunted in large numbers for their fur, but as the negative stigma attached to owning fur increases, the number of Arctic foxes that are hunted each year also decreases. However, the animal is still hunted by indigenous people in certain areas as a main source of food.

Arctic Foxes Can Have 15 Cubs in a Litter

Arctic foxes usually mate for life. A female Arctic fox can give birth to up to 15 cubs at once but the average is five. The gestation period is only a couple of months and the cubs are usually born at the start of the summer.

By the time winter comes around, the cubs are usually ready to head out on their own. The largest threat to Arctic fox cubs are large birds, like snowy owls, that primarily prey on the vulnerable cubs.

You Can’t Hide From an Arctic Fox

One of the more interesting Arctic fox facts is that the placement of their ears helps them to hunt. Their wide, front-facing ears allow them to have incredible hearing, which helps them to locate the exact location of their prey beneath deep snow.

Once the Arctic fox hears an animal, it leaps high into the air and pounces with enough force to break through the layer of snow and attack its prey beneath. Some of their most common prey includes sea birds, seal pups and fish.

According to Arctic fox facts, the animal digs deep burrows in the side of cliffs in which to live. They might also live in dens or caves. Some dig large burrows that have up to 100 different entrances. These burrows are usually hundreds of years old and are passed down to each new generation of Arctic foxes.

Having an underground space or area is critical to the Arctic fox’s survival. Because of harsh weather conditions, they need a place to be protected from the wind and snow during storms.

A Lemming is the Arctic Fox’s Favourite Meal

The Arctic fox enjoys lemmings over any other type of prey. Lemmings are small, short tailed rodents that are related to voles. They live in Arctic tundras. They are the Arctic fox’s main source of food and their populations are directly related to how many Arctic foxes are present.

For example, an area with an abundance of lemmings will provide plenty of food for a large number of Arctic foxes. But, if there are only a small number of lemmings, there will most certainly be fewer Arctic foxes present.

An Arctic Fox Has a Built-in Blanket

The tail of the Arctic fox is incredible bushy and almost appears to be too large for its body, but it is critical to its survival. It helps the animal maintain its balance, especially while its stout body is pouncing and jumping to dig and find food. The tail also acts as insulation.

When the Arctic fox is sleeping, it actually wraps its tail around its body and uses it almost as a built-in blanket. If an Arctic fox were to lose its tail during a fight or accident, it would have a very hard time surviving in its cold habitat.

Arctic Foxes Use Their Blood Flow to Keep Warm

Arctic fox facts tell us that the animal has a unique evolutionary trait that helps it to survive in the subzero temperatures of its climate. The arteries and veins in its limbs are positioned very close to each other.

This creates a continuous chain of heat transfer between the warmer blood in the arteries and the colder blood in the veins. Blood that is cooled in the paw against the cold ground is warmed by nearby warm blood traveling through the legs. This helps the entire body of the Arctic fox to remain warm.

Arctic Foxes Eat the Leftovers of Other Animals

While Arctic foxes prefer lemmings and other types of animals for dinner, they are also opportunistic hunters. During the summer months, it can be harder for them to track down their usual food, so they may eat seaweed or berries.

Other animals have more success in the last months of winter compared to Arctic foxes when it comes to hunting. Arctic foxes will often eat the leftovers from wolves or polar bears if the opportunity presents itself. If the Arctic fox is able to secure a large amount of meat, it will bury it deep in the snow to keep it safe from other animals, but still available for when it’s hungry.

Arctic Foxes Have a Dirty Secret

Arctic foxes, on occasion, will eat their own waste. This can be necessary to extract extra nourishment as the food is digested a second time. Even more intriguing is the fact that sometimes the Arctic fox will eat the waste of another animal.

This can also help them keep their salt levels in balance, which can be difficult in their type of climate. While fresh food is always better for the Arctic fox, the animal has to do what is necessary to survive in its harsh habitat.

Arctic foxes are generally forced to move often, based on the availability of food. They are built for travel, though, with cushioned paws that are able to glide easily over ice and snow. They are even capable of swimming if it becomes necessary.

An Arctic fox is able to travel nearly 3,000 miles over a single winter season, seeking food, shelter and companionship. The main reason for unnatural death in Arctic foxes is starvation, and is most likely to occur when the fox is on the move.

Arctic Foxes Are Legally Protected in Some Areas

Arctic fox facts tells us that, for the most part, the animal is not in danger of becoming extinct. However, in a few areas the population has dwindled. Sweden, Finland and Norway have all had protective laws regarding Arctic foxes for over 60 years.

This makes it illegal to hunt these animals for sport, which is common in some areas because of their warm pelt. Other areas, such as Canada, Russia and Alaska, have experienced a slight decline in the population but have yet to put a protection law into action.

In recent years, the Arctic fox has been forced out of its habitat by the larger red fox. This can mostly be attributed to climate change, which is causing the red fox to venture further out from its traditional territories. It then takes over the Arctic fox’s territory by killing them and their young.

Another reason that this may be occurring is because there are fewer grey wolves around the world than there used to be, due to hunting. Grey wolves usually kept the red fox population in control. Human hunters have led to a domino effect that has resulted in fewer Arctic foxes.

Arctic Foxes are only about the Size of a Pet Cat

When most people think of foxes, they think of fairly large animals, perhaps similar to a dog. But one of the more surprising Arctic fox facts is that these animals are smaller than some house cats. The average head and body length of a male is 22 inches, while a female is usually about 20 inches long.

The tail makes up a large proportion of the animal’s overall length and is usually about a foot long in both sexes. The animals are fairly short, averaging 11 inches in height. Their weight can vary greatly but the average weight between males and females is about six pounds.

Even though Arctic foxes are related to canines, they have very different personalities. They are actually the smallest canine, and have shorter, stouter bodies than most other canine species. They don’t bark but do make a wide range of noises to communicate with other foxes.

They are also nocturnal, moving and hunting during the dark night hours, and prefer to be on their own instead of in packs. The only exception to this is when a male and female are raising their young together. 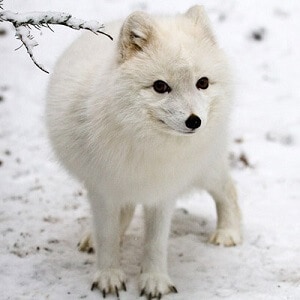 Arctic fox facts tell us all about these beautiful animals and how they have adapted to their harsh habitats. They have unique coats that not only keep them warm, but also change colour to help them blend in with their surroundings. These facts will also tell you about their diet, how they catch their prey and what their largest threats are.