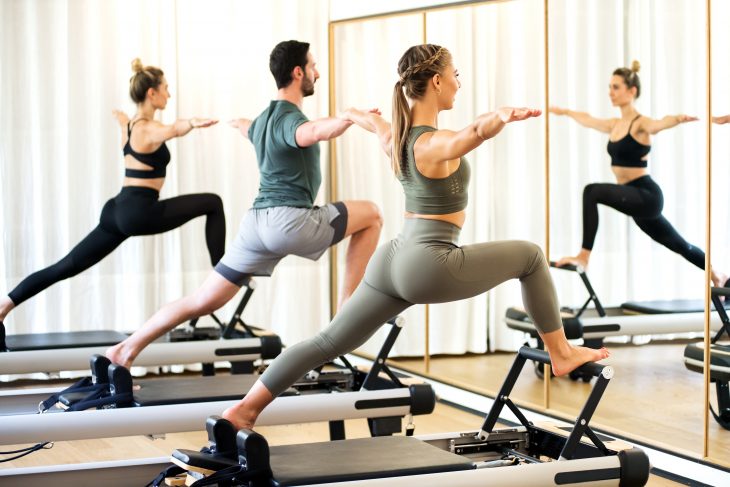 Commonly classified together with Yoga, it is actually a different exercise altogether. Pilates is an exercise method that controls your mind, body, and muscles. It isn’t just another trend, you can think of it as a cool way to hang out while working to keep yourself fit and healthy. There’s a history behind it, facts that made it what it is today. Now, read all about them with these 50 pilates facts.

Pilates has similarities with yoga.

Physically, a number of the discipline’s poses have a resemblance to those in yoga. The open leg balance, for example, has an appearance very close to that of Navasana. The same goes for the roll over exercise and yoga’s Halasana. Some exercises have virtually identical appearances, even, plough nose, and Bhujangasana for example. That said, differences do exist between the 2 disciplines. Contrology focuses on developing core strength, for one thing, while yoga focuses on developing flexibility. Yoga also emphasizes the spiritual aspects of its discipline.

The discipline does have its own spiritual background.

Pilates might not emphasize any spiritual aspect as part of its discipline, but it doesn’t mean they don’t exist. The discipline’s founder, Joseph Pilate, actually took inspiration from Ancient Greek ideals. In particular, the Ancient Greek philosophy of balance between a person’s mind, body, and spirit, is a core concept behind Contrology.

This perception comes from the fact that popular media tends to show only women practicing Pilates or other, similar disciplines, most of the time. When men practice it, it rarely, if ever, appears on popular media. Despite the impression it gives, it doesn’t ring true at all. Pilate explicitly developed Contrology for the practice of everyone, regardless of gender or even age. In fact, the first practitioners of the discipline were Pilate’s fellow soldiers in WWI, taken and kept prisoner like him.

US Court has ruled the word pilates a generic one.

This took place in 2000, allowing anyone to use the word and keeping anyone from registering it as a trademark. That said, ever since then practitioners of the discipline capitalize the word in order to differentiate generic and specific use.

Pilates does have an international organization of its own.

The Pilates Methods Alliance formed after the court decision, as a professional association for the discipline. The alliance connected teachers and practitioners worldwide, with the goal of setting standards, as well as to encourage unity and professionalism. In that way, they hope to not simply preserve, but enhance their founder’s legacy.

Joseph Pilate had high hopes for his discipline.

He believed that when practiced with consistency, Contrology would give many benefits for its practitioners. In particular, it would give them improved flexibility, make them stronger, and improve their control and endurance across their whole bodies.

Pilate considered concentration the most basic of them all, with Contrology demanding intense focus during practice. There’s also breathing, with Pilate emphasizing the importance of oxygenating the blood, and letting it flow freely across the whole body. This would then have the effect of energizing the body as a whole. Proper posture, relaxed movements, and high stamina are also all principles of the discipline.

Pilate considered control the core principle of his discipline.

It even gets referenced in the name he gave to his legacy: Contrology. Pilate taught that all exercises must have control behind them, with the goal of developing control not just of the body, but also any tools in use.

The discipline puts major importance on centering the body.

Flow is another important principle of the discipline.

Pilate taught that proper flow between exercises allowed for the economy of movement. Smooth transitions between exercises help build strength and stamina, while also improving coordination of the body’s extremities.

Precision is also another key principle of the discipline.

Pilate taught that without precision, people could exercise right. In particular, a single precise movement could do more than many half-hearted ones. This led to him setting a goal for precise movements to become second nature after repeated exercise.

One of Pilate’s classic mat exercises includes the Hundred.

So classic, that Pilates classes always teach it as the first exercise for practitioners. The name comes from 100 beats of the arms, while the practitioner lies on a padded mat. At the same time, they extend their legs into the air, while keeping their head and shoulders off the mat.

Roll up is another mat exercise but a step up from the Hundred.

Practitioners don’t recommend this exercise for beginners, though. It starts with a practitioner lying on their back with their legs straight before them. They then extend their arms straight ahead, before curling their body forward up and over towards their toes. They do this while slowly inhaling and exhaling a single breath over the course of the exercise. Typically, a single exercise routine includes six repetitions of the roll up.

The roll over is another step up from the Hundred.

Like the previous exercise, practitioners don’t recommend this exercise for beginners. They start with lying down on a mat, hands held palm down against the ground, and with legs spread. Then they lift their legs into the air and bend them back over their heads until the feet touch the ground. A single exercise routine will usually have three repetitions of the roll over.

Leg circle is another mat exercise recommended for those just starting with the discipline.

Practitioners start with lying down on a mat, arms pressed to the sides and legs extended straight forward against each other. A leg then gets lifted up into the air, aimed at the ceiling, and then moved in 8 circles in one direction, and then 8 again in the opposite direction. The exercise then repeats with the other leg, each leg repeating the exercise up to four times in a routine.

Practitioners start with lying down on a mat, legs extended into the air but with the knees bent. Then they pull one leg back by the knee while stretching the other leg forward. Afterwards they return to the starting position, before repeating the exercise with the other leg. A typical routine will usually have ten stretches per leg.

The double-leg stretch is also a beginner-level mat exercise.

Practitioners start with lying down on a mat hands help palm down, and legs extended with the knees bent. Then pulling both legs back by the knees, the legs then stretch forward, while stretching the arms back at the same time. A typical routine will have between six to ten double-leg stretches as part of it.

The open leg rocker is another example of a beginner-level mat exercise.

Practitioners start with sitting on a mat, and then holding their ankles, pull them up towards the shoulders. Afterward, they rock back against the ground, before rocking back up to a sitting position, without letting go of their ankles.

One mat exercise literally involves rolling like a ball.

Practitioners don’t recommend this exercise for beginners, though. It starts with a practitioner sitting on a mat and holding their legs by the shins. Then they roll back until the shoulders lie on the mat, before rolling forward back to the starting position. A routine will usually have five or six repetitions of this exercise.

The most basic equipment for the discipline is a simple padded mat.

Like many exercise disciplines, Pilates calls for a mat to cushion and support the spine when lying on the back. Mats for Contrology typically have more thickness than gymnastic mats, though the latter may substitute for the former. In fact, some instructors use gymnastic mats in order to increase the physical challenge the exercises pose.

Read also: 100 Music Facts That You Will Want To Hear And Learn About

A piece of equipment for the discipline has the actual name of Magic Circle.

The Magic Circle has the form of a padded circle, made from either rubber or metal, usually around 13 inches in diameter. Also known as a fitness circle or an exercise ring, Pilate developed them to help practitioners center their bodies in certain exercises.

Exercise bands are another piece of equipment used for the discipline.

Also known as stretch or flex bands, they started out as tools for rehab, but now have a place in various exercise disciplines. Not unique to Pilates, in fact, Contrology doesn’t have any specifics when it comes to exercise bands for its practitioners. They have the freedom to choose exercise bands to their personal preferences.

Weights are another piece of equipment used for the discipline.

Again, not unique to Pilates, as weights have had a use in exercise and sport long before Pilate developed his discipline. Contrology uses weights as a supplement for various exercises instead of standalone weight training. Typically, weights used in Contrology vary from one to three pounds in weight.

Pilate also developed a piece of equipment he called the Reformer.

One of his most famous inventions, the Reformer involves a carriage that moves back and forth inside a frame. A series of springs adds resistance, the resistance that a practitioner struggles against while doing exercises inside the Reformer.

He also developed his own kind of chair specifically for his discipline, called the Wunda Chair.

People called it the Wunda Chair, or just a low chair. It basically involves a box with one side and pressed down against a set of springs to provide resistance to struggle against. It also includes a set of pedals, which practitioners may use separately.

Basically, Pilate believed that you either did the exercise right or you don’t do it at all. It didn’t matter how many routines you did if you didn’t do them right. A single correctly-done routine had more effect than a dozen improperly-made ones.

Plenty of celebrities practice the discipline.

We’re sure you’ve heard of the likes of Madonna and Uma Thurman. Well, they among others are just two out of many celebrities who practice Pilates.

Seamed clothing can help when practicing the discipline.

The seams work like markers, showing off the body’s contours. In particular, they help tell if the body has an aligned position, and doesn’t lean either forward or back.

Medical professionals have some skepticism about the claimed benefits of the discipline.

Peer reviews conducted in 2011 and 2015 have revealed that while Pilates works better than no exercise at all, it doesn’t actually work any better than any other exercise discipline. Another peer review also done in 2015 found no evidence that Contrology helped improve the balance of elderly people.