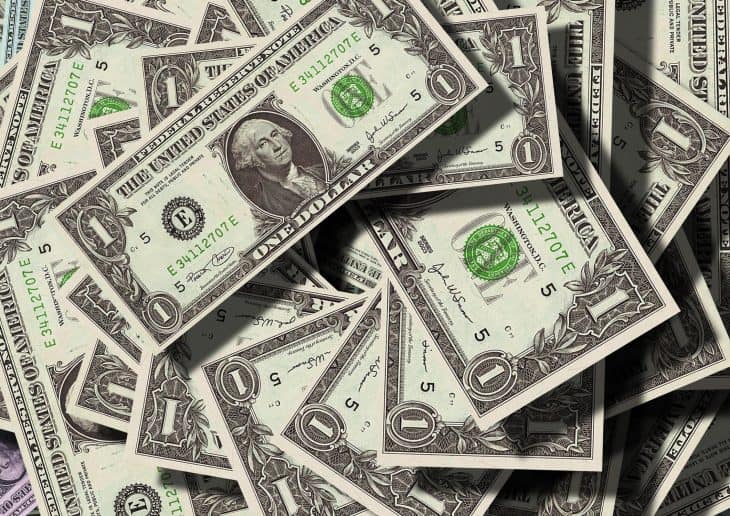 Quick Facts
Essential Facts
Interesting Facts
Table of Contents
01 The Romans were first to stamp the image of a person on a coin.
02 Knights used special rings as a form of payment.
03 Siberia valued tea bricks as money until WW2.
04 Queen Elizabeth II holds the record for appearing on more currency than any other person.
05 Early Romans used salt as a form of money.
06 There are more bacteria in your bills thank you think.
07 Before the Federal Reserve in 1913, each bank printed its own money.
08 Apple earns US$300,000 per minute.
09 The largest bill ever printed was a $100,000 gold certificate issued in 1934.
10 There is a $2 bill in the United States.
11 The lifespan of a $1 bill is just 18 months.
12 "Numismatics" is the official name for studying money facts.
13 The ink used to print money is high tech.
14 The grooves around the edge of your coins aren’t purely decorative.
15 Americans spend $117 billion each year on fast food.
16 A penny costs 2.4 cents to manufacture.
17 Gambling brings in more revenue than any other industry.
18 It wasn’t until 1963 that the phrase “In God We Trust” appeared on U.S. currency.
19 The top of the Lincoln Memorial on the back of a $5 bill lists all 50 states.
20 Rats ate $2.1 billion of Pablo Escobar’s loose change.
21 Pablo Escobar spent $2,500 a month in rubber bands.
22 Employees can no longer retire at age 65.
23 One bill weighs one gram and 454 bills equal one pound.
24 North Korea is the largest counterfeiter.
25 Money engravers are extremely skilled.
26 Secret designs on the $1 bill link it to the original 13 colonies.
27 Putting pennies in your garden deters pests.
28 The piggybank dates back to the Middle Ages.
29 The most expensive coin sold for over $40 million.
30 A great deal of U.S. currency contains trace amounts of cocaine.

The only money facts we know are that we want it and we need it. Everyone needs money to survive this world. During a time when money dictates who gets what, our anxiety levels spike up whenever we think about it.

Take a breather and change the way you see money by reading these mind-boggling money facts!

The Romans were first to stamp the image of a person on a coin.

After winning in war, Roman emperor Julius Caesar featured his portrait on a coin in 44 B.C. for circulation. At the time, it was an unacceptable act of political arrogance in Rome.

Knights used special rings as a form of payment.

Because of lurking robbers, knights in the Middle Ages did not want to carry coins in their pockets. Instead, they wore special rings.

If a knight frequented a tavern, he would stamp the bill with his ring. The owner would then take the stamped bill to the knight’s castle to be paid what he was owed.

An interesting money fact is that tea was the main currency in Siberia.

Multipurpose, people would eat tea bricks during times of hunger and brew them into warm medicine which can cure coughs and colds.

Queen Elizabeth II holds the record for appearing on more currency than any other person.

She’s featured in 15 banknotes since her childhood. As young as eight years old, she was featured on Canada’s $20 bill. Now at 93 years old, Queen Elizabeth II is the longest-lived and second longest-reigning in the British monarchy.

God save the queen!

Early Romans used salt as a form of money.

With refrigeration technology a few centuries away, Romans used salt to preserve food, specifically fresh meat. Like today, their form of currency gave them access to eating.

Even the word “salary” is derived from “sal,” which means “salt” in Latin.

There are more bacteria in your bills thank you think.

Money is indeed dirtier than a household toilet. One NYU study found more than 3,000 types of organisms on just 80 $1 bills that link to pneumonia and food poisoning.

Before the Federal Reserve in 1913, each bank printed its own money.

Can you imagine being a bank teller in the late 1800s? It sounds like my dream job!

They earn millions per day. Think about that.

It was printed from December 1934 through January 1935 and used only in transactions between Federal Reserve Banks and the U.S. Treasury.

There is a $2 bill in the United States.

It’s a rare sight, but you can request it in your local bank!

Money can’t last forever. Through wear and tear, money needs to be replaced now and then. Here’s the full breakdown of bills and coins:

"Numismatics" is the official name for studying money facts.

Know all the money facts and impress others by having a “certified money expert” on your resume.

The ink used to print money is high tech.

It’s so technologically advanced that it has trackable, magnetic, and color-changing properties.

The grooves around the edge of your coins aren’t purely decorative.

The grooves are there to keep people from scraping off the coin faces and selling them as precious metals.

If you want to kill time, try counting how many grooves each coin has. (Spoiler alert: a quarter has 119 grooves and a dime has 118.)

Nothing like a good burger-and-fries-milkshake combo meal at a fast-food chain.

A penny costs 2.4 cents to manufacture.

Yup, making a penny is more expensive than spending it.

Gambling brings in more revenue than any other industry.

It wasn’t until 1963 that the phrase “In God We Trust” appeared on U.S. currency.

The top of the Lincoln Memorial on the back of a $5 bill lists all 50 states.

But to read them, you need a magnifying glass.

Infamous drug lord Pablo Escobar had so much spare cash lying around that he lost more than 2 billion dollars to rats. He kept his cash in a warehouse since he couldn’t deposit them to a bank.

This was no issue for Escobar since he only lost 10% of his savings because of these pests.

Yes, you read that right. He needed $2,500 worth of rubber bands a month to hold all of the bricks of money together.

Employees can no longer retire at age 65.

One bill weighs one gram and 454 bills equal one pound.

Challenge yourself to save enough bills to weigh as much as one pound per year and you’ll be a millionaire in no time!

North Korea is the largest counterfeiter.

North Korea produces fakes so precise that they are referred to as “superdollars,” and require specialized equipment at the Federal Reserve to be detected.

As of 2009, an estimated $45 million worth of these fake bills has been identified.

Are you detail-oriented and precise? Be a money engraver. Not only do money engravers work with incredible precision, but they also have to illustrate backward.

It takes close to 15 years of training to become an engraver. So start studying now!

Secret designs on the $1 bill link it to the original 13 colonies.

Unlucky 13? Not for your $1 bill. The number 13 is of great significance which can be seen in its design: 13 steps on the pyramid, 13 vertical bars on the shield, 13 horizontal stripes on the top of the shield, 13 stars above the eagle, 13 leaves and 13 berries on the olive branch in one of the eagle’s talons, and its other, there are 13 arrows.

On the Department of Treasury seal, there are 13 stars above the key.

Pennies buried in a garden will repel slugs, which get electric shocks from touching copper and zinc.

The piggybank dates back to the Middle Ages.

In Old English “pygg” was a type of clay that was used for making jars and dishes that held money. As time passed, the word eventually morphed into “piggy bank” and the design resembled that of a pig.

The most expensive coin sold for over $40 million.

The 1913 Liberty Head nickel sold for $43.7 million. It is a rare coin made by a rogue Mint employee. There are only five known to be in existence. Do you think you have one?

A 2009 study found that anywhere from 90% to 94% of bills contain the illegal white substance.