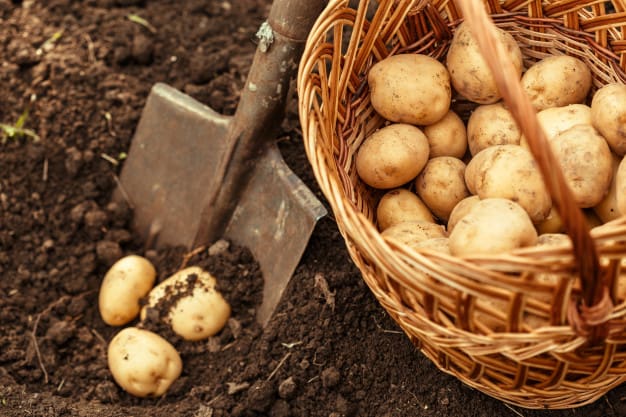 Quick Facts
Essential Facts
Interesting Details
Table of Contents
01 Potato Facts Infographics
02 Potatoes came from the Andes.
03 Potato comes from the Spanish word “Patata”.
04 China is the world’s largest potato producer.
05 Idaho is coined as the Potato State.
06 The potato state is complete with a potato museum.
07 Potato tubers grow as a part of the nightshade family.
08 Your usual potato serving is just one of numerous varieties.
09 Potato contains vitamin B6, potassium, and more.
10 A potato has only around 100 calories.
11 Potatoes are good for health.
12 They could take up different forms of cooked food.
13 Potatoes are used to make alcoholic beverages.
14 This vegetable makes a great breakfast.
15 Potatoes were worth gold.
16 You can eat potatoes with sprouts.
17 Potatoes have gone bad when they are shriveled and wrinkled.
18 You can be poisoned by potatoes.
19 Potatoes are best kept in cool, dry places.
20 It’s important to include the potato skin in the preparation process.
21 Wash potatoes only right before cooking them.
22 Potatoes can grow to a height of 4700 meters.
23 You can live off potatoes.
24 Over a billion people eat at least 1 potato each day.
25 Potato tops in most produced and most consumed food.
26 Potato flowers were big in fashion.
27 Potatoes ventured into art.
28 There is a blue-violet colored potato.
29 Potato is the ultimate voyager’s food.
30 Tomtato is half tomato, half potato.
31 There is a National Potato Day.
32 One Last Seed for Thought

Potatoes came from the Andes.

The vegetable’s existence is quite old age as its domestication dates approximately between 8000 and 5000 BC in Peru or Bolivia, known as the Andes back then. Still, its earliest verified tuber was found in 2500 BC at the Ancon coastal site and the Incas cultivated it as early as 1800 years ago.

Semantically speaking, the potato has a rather Spanish origin. It came from the Spanish word ‘patata’ in the 1950s, which then stemmed from the Caribbean language ‘batata’ or “sweet potato”. Today, the word comes by other slang terms such as spud, tater, and tattie.

China is the world’s largest potato producer and exporter, while the countries India, Germany, Ukraine, Russia, Poland, and the United States are leading producers as well. In the USA alone, all 50 of its states grow the tuber crop, with Idaho and Washington being the largest ones.

Idaho is coined as the Potato State.

Idaho might be a late bloomer in the potato growing part, but it still became known as the potato state for an amazing reason. They only started growing potatoes in 1836, but once the russet, the state’s most famous potato variety, was cultivated in 1872, Idaho was in for a historic ride.

The potato state is complete with a potato museum.

Of course, the “potato state” won’t be complete without its potato museum. It seemed fitting for a group of locals to feature the significance of potatoes in their economy. Hence, the display of the renowned potato tribute since 1913.

Potato tubers grow as a part of the nightshade family.

The potato plant is part of the Solanaceae, or the nightshade family. Their starchy edible tubers are the main reason why they are widely grown, produced and consumed.

Your usual potato serving is just one of numerous varieties.

That potato that you had for dinner is just one of the many varieties of the tuber crop, with it being the Sebago or common potato in particular. Other known types are the Russet Burbank, Pontiac (with the thin red skin), Pink Eye (Tasmanian Pink Eye), Kipfler, Spunta and Pink Fir Apple.

Potato a.k.a. near-perfect food is 99.9% fat-free and contains vitamins B6, C, E, K, and minerals like potassium, magnesium and phosphorous.

A potato has only around 100 calories.

Potatoes are good for health.

Potatoes are known to be good for the stomach, spleen, and intestines. They could also boost heart health, improve digestion, strengthen the immune system and maintain fluid balance.

They could take up different forms of cooked food.

Cooked or not, there are nearly endless things that you could do with potatoes. Meals all over the world are already blessed with the individual wonders of potatoes when boiled, baked, fried, mashed, or when made into soup and even into chips!

Not just good to chew, potatoes are good to drink as well. They could also be used to brew certain types of alcoholic beverages like Vodka, Akvavit, or Poitín.

This vegetable makes a great breakfast.

Given its many nutritional contents, it is best to eat potatoes for breakfast as they could well provide all the minerals you need to keep you healthy throughout the day.

Potatoes were worth gold.

There was a time when potatoes were traded with gold directly. Back in the 1890s, the Alaskan Klondlike gold rush potato had very high value due to its essential Vitamin C content.

You can eat potatoes with sprouts.

Yes, you can! Despite the new sprout coming, potatoes are still safe to eat as long as they are still firm to the touch. Just remove the sprouts and go on with your plan recipe. Unless it’s too wrinkly and shriveled already, then you might as well just call for delivery.

Potatoes have gone bad when they are shriveled and wrinkled.

Once you see that your little patooties are starting to shrivel and have more wrinkles, then it means that they have lost more of its nutrients. In other words, it’s not that palatable anymore so you would have to have a change of plans or your recipe won’t taste anywhere near what you expect it to.

You can be poisoned by potatoes.

One could suffer from potato poisoning upon consuming leaves and green stems. These parts contain toxic solanine which could cause potato plant poisoning with symptoms such as abdominal pain, fever, nausea, headaches, and vomiting. It may take up to 8-10 hours from consumption before the onset of such signs.

Dry, dark places are the perfect storage setting for potato. When kept at 45-50 degrees Fahrenheit, they could even last up to three months. Higher temperatures could cause sprouting and shriveling of the supply, shortening its lifespan to only a week. Likewise, too cold storage settings could darken potato when cooking.

It’s important to include the potato skin in the preparation process.

It’s best to boil, steam or bake potatoes in their skins, as their nutrients lie very close to these parts. Peeling them before cooking could cause the loss of these nutrients. Soaking peeled potato in water is also not recommended as its nutritious contents could dissolve in water.

Wash potatoes only right before cooking them.

You shouldn’t wash your potatoes prior to storing as it would only speed up your supply’s decay. Save the washing part to right before you cook it.

Potatoes can grow to a height of 4700 meters.

The common commercial varieties of the crop are just a few of the 5,000 known varieties that have their individual culinary and agricultural attributes. What’s even more amazing is that they could grow from sea level up to 15,420 feet above sea level. That’s a good 4,700-meter rise right there!

You can live off potatoes.

The scientists have claimed it, you could live off potatoes. Just pair it with a fair serving of milk or butter, and you’re good to go with almost all the nutrients that a human body needs to survive.

Over a billion people eat at least 1 potato each day.

Potato tops in most produced and most consumed food.

Despite the couch potato association with lazy bums, this nutritious vegetable has been setting world records here and there. It is the fourth most-produced crop, the most consumed food in countries, and is even the first vegetable that was ever grown in space.

Potato flowers were big in fashion.

Potatoes seem to like to go big, as their influence even reached that of royal fashion. French Queen Marie Antoinette gave birth to potato in fashion inspired by the bouquet of potato she received. The flower instantly became trendy once she made a public appearance with it as decorations to her clothing.

This unbelievable crop might as well be the celebrity of the food-verse. Its role extended towards the masterpieces of world-renowned artists. You could find words and illustrations of potato in Shakespeare’s The Merry Wives of Windsor, Van Gogh’s Potato Eaters, and James Joyce’s Ulysses.

There is a blue-violet colored potato.

Potato also comes in a unique blue-violet color. The vitelotte noire, or simply vitolette, is a gourmet French potato variety which dates its cultivation in France at least since the early 19th century. Because of its remarkable color, it is also called the Chinese truffle. Most importantly, this variety is known to be a great antioxidant.

Potato is the ultimate voyager’s food.

Since its space pioneer feat, the potato became a vital part of the goal to feed space voyagers on long expeditions and future space colonies in the future. If its attributes are not fit enough yet for the role, then what other option is there, right?

Tomtato is half tomato, half potato.

Also known as ‘pomato,’ the tomtato is the product of a grafted potato plant and tomato plant. This efficient strategy could grow both potatoes and tomatoes, and there is little to no effect on the quality. Hence, valuable garden and field space could be saved.

There is a National Potato Day.

Such greatness can’t go unobserved right? Aside from celebrating National Potato Day (or days) every August 19 and October 27, the United Nations even declared 2008 as the official Year of the Potato. All hail potatoes!

One Last Seed for Thought

Potatoes are now more recognized through the many things that people could do with them. The infamous french fries, hash browns, chips, and crisps are just some. But while it is not an entirely bad thing, it could give some people the wrong idea that potatoes are not healthy and does no good to the human body – the exact opposite of its true nature. These facts are a good step to inform people about the roots of the crop, its contributions to history, society and economy, and its numerous benefits to humans. Keep as much as you can in mind the next opportunity you get to munch on these taters!