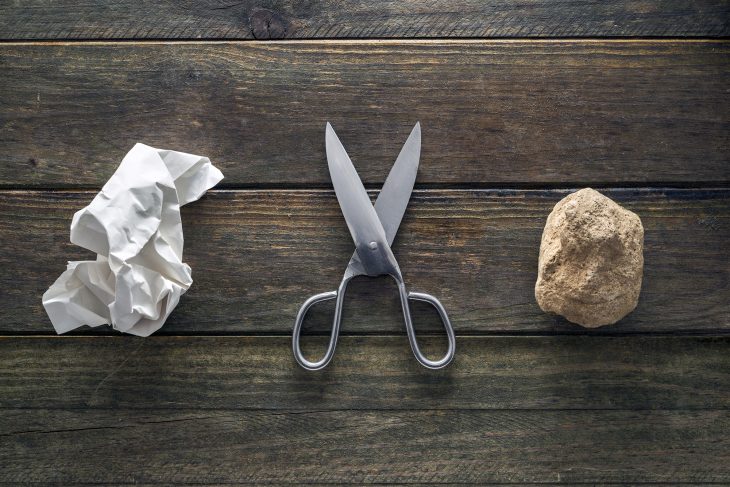 One of the first games you’d learn about as a kid is rock paper scissors. While it may seem like a mindless thing only meant to settle petty arguments, this game is one of the most perfect exercises in probability. Each time you throw a hand in rock paper scissors, you become the subject of three different outcomes. Learn more about the science behind this game and how to win it with these rock paper scissors facts.

Quick Facts
Essential Facts
Interesting Facts
Table of Contents
01 Rock paper scissors has other names in different countries.
02 Rock paper scissors is not completely a game of chance.
03 People are most likely to repeat their winning moves.
04 You can improve your rock paper scissors skills with Afiniti.
05 You can improve your chances of winning by exploiting non-random behavior.
06 The first national champion of the USA Rock Paper Scissors League won $50,000.
07 The Rock paper scissors tournament in 2014 sets a world record.
08 This game rewards emotional intelligence, intuition, and observation.
09 If two elite players face off, results can be unpredictable.
10 The rock-paper-scissors game has many variations
11 It's advised that if you lose with paper, play rock the next turn.
12 Using paper is a good opening against male players.
13 Paper is also a good choice as the match progresses.
14 No player wants to become predictable.
15 You should observe your opponent's hands when playing.
16 There is psychology behind every player's moves.
17 When people are losing, expect them to use rock.
18 A losing opponent will not use paper often.
19 There is a game called, "Rock, Paper, Scissors, Lizard, Spock."
20 Rock, Paper, Scissors, Lizard, Spock has a lesser chances of a tie in each turn.
21 The Big Bang Theory featured the modified game Rock, Paper, Scissors, Lizard, Spock.
22 The Philippines' Jak-en-Poy was inspired by the Japanese's Jan-ken-pon.
23 The Malaysian version uses bird, water, and stone.
24 The Indonesian version uses human, elephant, and ant.
25 Korea has an upgraded version of rock-paper-scissors.
26 Pokémon uses the rock paper scissors gameplay element.
27 Most online team battle games uses a rock paper scissors format.
28 Rock paper scissors once solved a court case.

Rock paper scissors has other names in different countries.

While the rules stay the same, rock paper scissors takes on many names across different countries. In the UK, it’s known as ‘Paper Scissors Stone/Rock’ and Rochambeau. In Germany, people call it Schnick, Schnack, Schnuck. In Asia, the Chinese call it Jiandao Shítou Bu, while the Japanese know it as Janken.

Rock paper scissors is not completely a game of chance.

Most people believe that rock-paper-scissors is a game of chance. However, research suggests that it’s not just about “luck,” since most people have a tendency for unconscious moves. If you pay enough attention, you could recognize your opponents’ patterns and habits.

People are most likely to repeat their winning moves.

Upon observing 300 games of rock paper scissors, a Chinese study revealed that players were most likely to stick with their winning moves. On the flip side, players tend to change their losing moves right away, usually in the sequence of rock-paper-scissors.

You can improve your rock paper scissors skills with Afiniti.

The Afiniti website lets you hone your rock paper scissors skills through interactive activities. Afiniti uses a computer algorithm that predicts its opponent’s moves based on their history.

The algorithm operates on the notion that people are not inherently random. That said, it identifies patterns in a player’s chosen hand over the course of the game. The longer you fight Afiniti, the more data it will have – which makes in increasingly harder to beat. Try your hand at fighting Afiniti in a rock paper scissor game here.

You can improve your chances of winning by exploiting non-random behavior.

If you notice that your opponent favors rock, you can always counter with paper. Generally, this applies to all rules of the game. Most rock paper scissors games can be won if you outwit or out-bluff your opponent.

The Rock paper scissors tournament in 2014 sets a world record.

The game of rock paper scissors requires certain skills such as emotional intelligence, intuition, observation, and strategy. However, fighting against an opponent who plays randomly can be much harder to pull off. Without patterns, it would be hard to build an effective strategy.

If two elite players face off, results can be unpredictable.

If two veteran or elite rock paper scissors players match up, chances are, they will get an equal probability of winning, losing, or tying. In the end, it comes down to who can read their opponent’s patterns better.

The rock-paper-scissors game has many variations

Aside from its name, rock paper scissors also varies in the symbols used for each country. For one, Japan’s Sansukumi-ken frog, slug, and snake in place of the traditional rock, paper, and scissors.

It's advised that if you lose with paper, play rock the next turn.

When you play against someone in a casual game, you can expect their repetition. It’s always important to remember that the winners will usually stick with the same action that gave their success. If you lose with paper (they played scissors), they’ll play with scissors again next turn. As a counter move, you you should go with rock. While it may not guarantee your success, it increases your chances of winning.

Using paper is a good opening against male players.

Scholars suggest that men commonly open with rock because of its association with determination and strength. As such, you may have high chances of winning first throw if you play paper against a man. However, scissors would be your best bet against a woman.

Paper is also a good choice as the match progresses.

Papers are not just handy in the opening, it’s also a strong “weapon” along the way. According to the numbers, people use rock and scissors 35% of the time, while paper is only used 29.6% of the time. Therefore, using paper may give you a slight advantage as it increases the odds of draws and wins.

No player wants to become predictable.

Bear in mind that no player wants to become predictable in the game. If your opponent already threw a double (2 rocks, for instance), the chances of rock to be used for a 3rd time is pretty low. By anticipating it, you now have a 50/50 chance of winning, knowing not to use paper anymore.

You should observe your opponent's hands when playing.

Aside from patterns, observing your opponent’s hand before they launch can also indicate what they’ll throw. Often, a loose hand ends up as  paper. If two fingers are loose, it may hint towards scissors. Meanwhile, a tight hand most likely ends in a rock.

There is psychology behind every player's moves.

For one, players often throw scissors when they’re winning or confident. Compared to rock and paper, scissors are a more useful, potentially deadly tool. This is why scissors also represent managed aggression.

When people are losing, expect them to use rock.

When players fall behind, they would tend to use rock more often. Players subconsciously believe that a rock is a reliable weapon to bring them back in the game. Thus, using paper when you’re already winning will even seize your chances of winning the game.

A losing opponent will not use paper often.

Players subconsciously believe that paper is the weakest hand due to its nature. After all, paper can easily be torn apart and subject to any attack. Furthermore, an open hand represents peace, passiveness, and friendliness. Once you catch your opponent in a losing streak, the chances of them using paper drop considerably low.

There is a game called, "Rock, Paper, Scissors, Lizard, Spock."

Rock, Paper, Scissors, Lizard, Spock has a lesser chances of a tie in each turn.

The creators introduced two new symbols to throw to lessen the chances of draws commonly observed in the standard rock paper scissors. With this modified game, players will enjoy 5 varieties to choose from, reducing the probability of a tie in each turn.

First introduced in a 2005 article in The Times of London, the modified game didn’t really take off until a few years later. It gained more traction after the American sitcom The Big Bang Theory used it in one of their episodes in 2008.

In the Philippines, locals call rock paper scissors as “Bato Bato Pick” [Rock Rock Pick (choose)] and “Jak-en-Poy.” The main difference between the two is that Jak-En-Poy involves a certain chant, while Jak-En-Poy is a much quicker game with no singing.

For the Malaysian version, the “bird” replaces scissors, gesturing with the fingertips of five fingers brought together to form a beak. While stone is self explanatory, the open palm signifies “water”. Stone beats bird (by striking it), bird beats water (by drinking it), while water beats the stone (by sinking it).

Korea has an upgraded version of rock-paper-scissors.

In South Korea, people call rock paper scissors as ‘muk-jji-ppa‘ (muk-rock, jji-paper, ppa-scissors). This game starts as a regular rock-paper-scissors to determine who is going to attack. Whoever wins has to shout ‘muk-jji-pa’ then the winner will attack and the opponent will defend.

In short, the winner should make his or her opponent use the same hand as them to win the game.

Another concept of rock paper scissors in video games is character classes in RPGs such as ‘melee’ (swordsmen, fighters, tanks), ‘ranged’ (marksmen, archers, mages), or even a ‘flying-type’ character. Depending on the game’s developer, players are usually allowed to pick any characters they desire. With each class having its own weaknesses and strengths, this kind of multiplayer game promotes effective strategizing.

In 2006, Florida Federal Judge Gregory Presnell became disappointed in the lawyers’ incompetence to solve discovery matters. Thus, he ordered them to settle the dispute through a game of rock paper scissors.