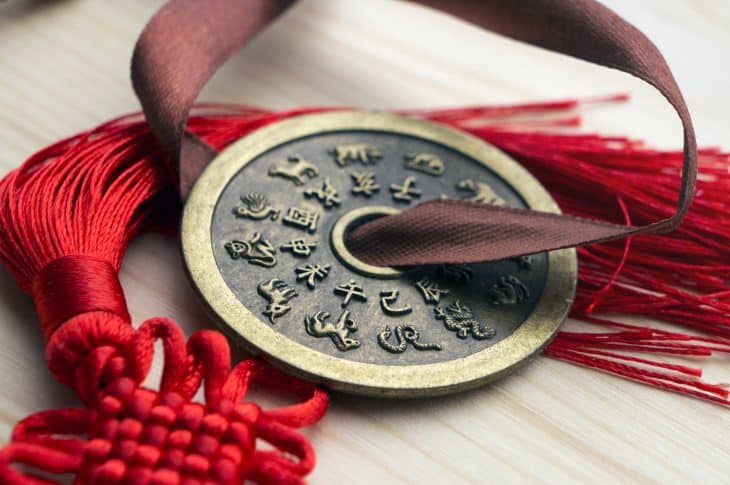 The Chinese zodiac signs, also known as ‘Shu Xiang’ or ‘Sheng Xiao’, have 12 animal symbols. It originated more than 2000 years ago in the ancient zoolatry where ancient religion worships animals. These zodiac signs are associated with the five “elements” or  “phases” that are fire, water, wood, metal, and earth. Moreover, this belief has become a vital part of Chinese culture. Instead of representing months, like the Western constellations, Chinese zodiac signs correspond to years according to the Chinese lunar calendar, with an animal representing a particular year, starting on the first day of the Lunar New Year. Furthermore, Chinese zodiac signs influence people’s lives in terms of fortune, career, marriage, compatibility, and even personalities.

Before we delve further into the details of each of the 12 animals, let’s start with some background of the Chinese zodiac.

Origin Of The Chinese Zodiac Signs

There are many myths and legends regarding the Chinese zodiac, and the most popular version of the Chinese zodiac starts with The Jade Emperor. In Chinese cultures, myths, and other religions, the Jade Emperor is one of the representations of the first God. There are countless stories in Chinese mythology about the Jade Emperor. Some believe that the Jade Emperor lived a selfless life in his childhood to help the needy while he was also the crown prince of the kingdom of Pure Felicity and Majestic Heavenly Lights and Ornaments. One day, the Jade Emperor decided to have 12 animals to be his guards, and the first 12 animals to arrive would be selected. On the given day, the Rat got up early and hastened to the gathering site. But when the Rat saw that the Ox was running much faster, the Rat offered the Ox that it would sing for him provided that it carried the Rat along the way. Finally, upon the arrival of the Ox and the Rat, the Rat slid in front of the Ox and became the first animal of the Chinese zodiac, then eventually, the 10 other animals followed.

Why is the cat not part of the Chinese zodiac?

According to some, the Rat and the Cat were good friends initially. When both of them heard of the news that the Jade Emperor was picking zodiac animals, the cat said to the rat, “We need to be a part of that, but my problem is I can’t wake up early.” Being a friend, the Rat promised that he will wake up the Cat and they would go together. Unfortunately, in the morning when the Rat got up, he was too excited and forgot his promise to the Cat, and headed straight to the gathering place. Finally, when the Cat arrived, the selection had already ended. And this is probably the reason why cats hate rats so much to this very day.

Apart from the Rat’s trick to the Ox in the race story of the Chinese zodiac, there are other beliefs about prioritizing animals. According to Chinese mythology, the universe started without any light and form until the earth and heaven were separated. Moreover, it was the Rat that created a crack and let the air in. For the believers, the Rat became the hero of the world.

12 Animals Of The Chinese Zodiac 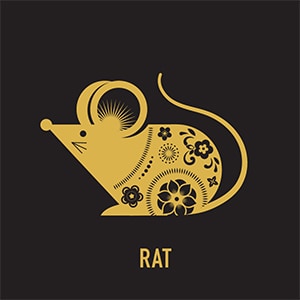 The Rat is the 1st amongst the 12 animals in the 12-year cycle of the Chinese calendar system. It belongs to one of the five elements, Earth. Ancient tribes worship the Rat as a god and offering sacrifices for prosperity and success. The characteristics of the Rat are being shrewd and intelligent.

Interesting fact! Global recessions and stock market turbulences occurred in the year of the rat; 2020 (COVID-19) and 2008 (Global Financial Crisis). 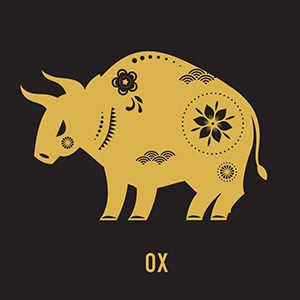 The Ox is the 2nd animal symbol in the 12-year cycle. There are many ancient stories about Ox or Ox-like humans in the Chinese belief. These stories include the Ox as both human and heavenly beings. Some stories are about the Ox or cattle on the agricultural side. But the most important purpose of the Ox is it being a religious sacrifice or offerings. Traits of the Ox include strong, dependable, diligent, and determined. 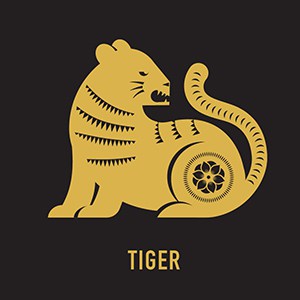 The Tiger is the 3rd animal among the zodiac signs. Commonly, tigers are dwelling in spacious lands so they have sharp eyesight and strong senses. They are the symbol of power. The characteristics of this zodiac are vigorous, cautious, persistent, and strong-willed. Therefore, these characters help them to be a great leader. They always work hard to succeed because have a hard time accepting failures. 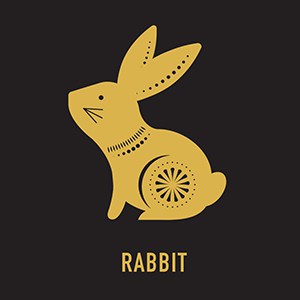 The Rabbit is the 4th animal in the 12-year cycle of the Chinese zodiac. According to the belief, if you’re born during the year of the rabbit, you’ll usually have a tender and soft personality character. Moreover, rabbits are tame, loving, fast to act, do not like to argue, have a modest attitude, pleasant to be with, and don’t get easily irritated. 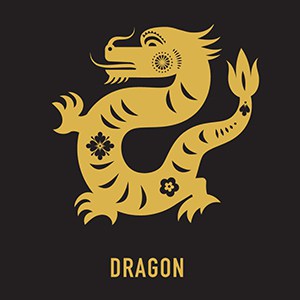 As the 5th aminal in the 12-year cycle of the Chinese zodiac, the Dragon’s personality tends to be energetic, ambitious, adventurous, and a leader. Dragons are born with magnificent leadership, combined with wisdom, knowledge, and capability, people around them are prepared to take orders.

Fun fact! Dragon is the most favored zodiac among the Chinese, causing “baby booms” in the respective Dragon years. 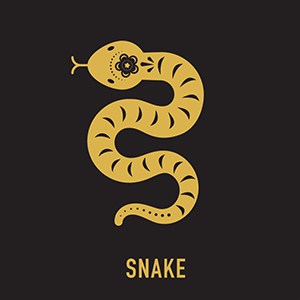 The Snake is the 6th animal of the Chinese zodiac. Most of the time, people regard this animal as evil and their appearance is always frightening. Thus, its symbol seems so mysterious and malevolent. On the other hand, the Snake is one of the emblems in the old Chinese traditions. Nowadays, there are still places in China where people believe that it is good luck to find a snake in their courtyard. The characteristics of the Snake zodiac are calm, observant, perceptive, and wise. However, they are also possessive and indifferent. 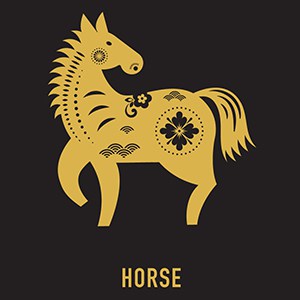 The Horse is the 7th animal in the Chinese zodiac. People born in a year of the horse usually have a passionate, energetic, upright, and a hopeful personality. They are also known to be enthusiastic, warm-hearted, have a good sense of humor, lively, active, and constantly seeks independence and freedom. 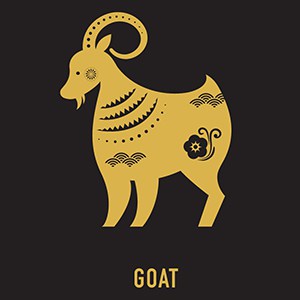 The goat (also known as sheep or ram) is the 8th animal in the Chinese zodiac. Goat people are generally a little bit shy and tender. They also love to depend on others with a passive attitude. Nevertheless, goats are sympathetic, kindhearted, lawful, persevering, creative, friendly, and kind. 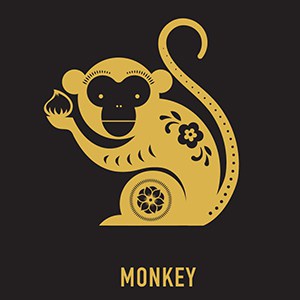 The monkey is the 9th aminal in the Chinese zodiac. According to the Chinese zodiac, monkeys are naughty, sharp, and smart. Their skills and bright ideas can be seen as early as their young age. Furthermore, they can predict the odds and probabilities well, as well as trying their best to help others in daily life with a cheerful character which can influences them and everyone around them. 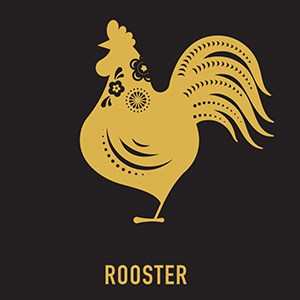 According to the Chinese zodiac, the Rooster represents confidence and intelligence. Roosters are critical thinkers, bright, honest, ambitious, communicative, skilled, and warm-hearted. Moreover, they have high self-respect, rarely rely on others, and would love to go out as presentable as possible. 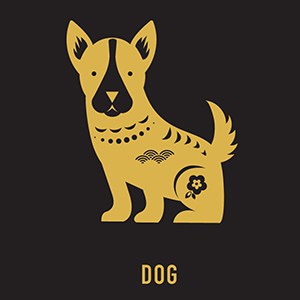 The Dog is second to the last animal in the Chinese zodiac signs. Dogs are man’s best friend and are a promising animal. They are honest and loyal in character. Moreover, they are naturally cautious and it takes time to acquire new friends. But once they have earned friends, they will remain loyal to them and be supportive of them. They are also faithful lovers and reliable partner. 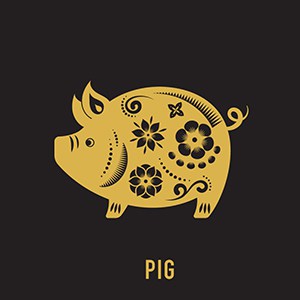 The Pig is the final, and 12th, animal in the Chinese zodiac. Based on the Chinese zodiac, people who are born in the year of the Pig have a hospitable personality, honest, frank, gentle, courageous, with a calm and a strong heart. Furthermore, they are normally independent or self-supporting, helpful, compassionate, generous, and patient. Pigs are also known to be trustful and there could be times that others may take advantage of them.

The Chinese zodiac has a huge impact on various Asian countries including Japan, Vietnam, Thailand, Singapore, Myanmar, the Philippines, Cambodia, and Korea. In certain countries, the zodiac signs are very much the same as what the Chinese are using, while some of the animals may vary in other countries.

In the Vietnam zodiac, the second animal is the Water Buffalo instead of Ox, and the fourth animal is the Cat, instead of Rabbit. One particular reason why the Cat was used was that there weren’t any rabbits in the country yet when the zodiac was introduced in Vietnam.

In the Thai zodiac, the Nāga replaced the Dragon as the 5th animal. A Nāga is a half-human half-serpent deity in the South Asian countries. People worship the Nāga because they believe it gives wealth and fertility.

The Burmese zodiac has fewer zodiac signs and it is a little different too as compared to the Chinese zodiac. It only has a total of eight zodiac signs which is based on directions: North, East, South, West, Northeast, Southeast, Southwest, and Northwest. The days of the week are the basis of the ruling of astrology. However, Wednesday is split into two parts; morning and afternoon, making it a total of eight days. These days have their own corresponding animal symbols: Garuda (mythical bird), Tiger, Lion, Elephant (no tusks), Elephant (with tusks), Rat, Guinea Pig, and Dragon.

Although there may still be a slight difference in the versions, the Korean, Singaporean, the Philippines, and Cambodian zodiac signs are very similar to the Chinese zodiac which uses the Rat, Ox, Tiger, Rabbit, Dragon, Snake, Horse, Goat, Monkey, Chicken, Dog, and Pig. According to Korean culture, for instance, each year is represented by one of 12 zodiac signs known as the animals of the Sibijisin where each animal was said to be a guardian that kept people safe during its time.

The Chinese zodiac signs are one of the most valuable cultural treasures of China. Reading the Chinese zodiacs can uplift a person’s mood or boost its morale for it’s filled with encouraging and positive words that can change a person’s perspective and walk towards the “right path.” Practiced since the 5th century BC, the zodiac signs have been well preserved and used to this day, and above all, it is both accepted and respected in the society for both believers and non-believers, even though its predictions are not based on hard evidence and often criticized as an industry that’s there to make money.