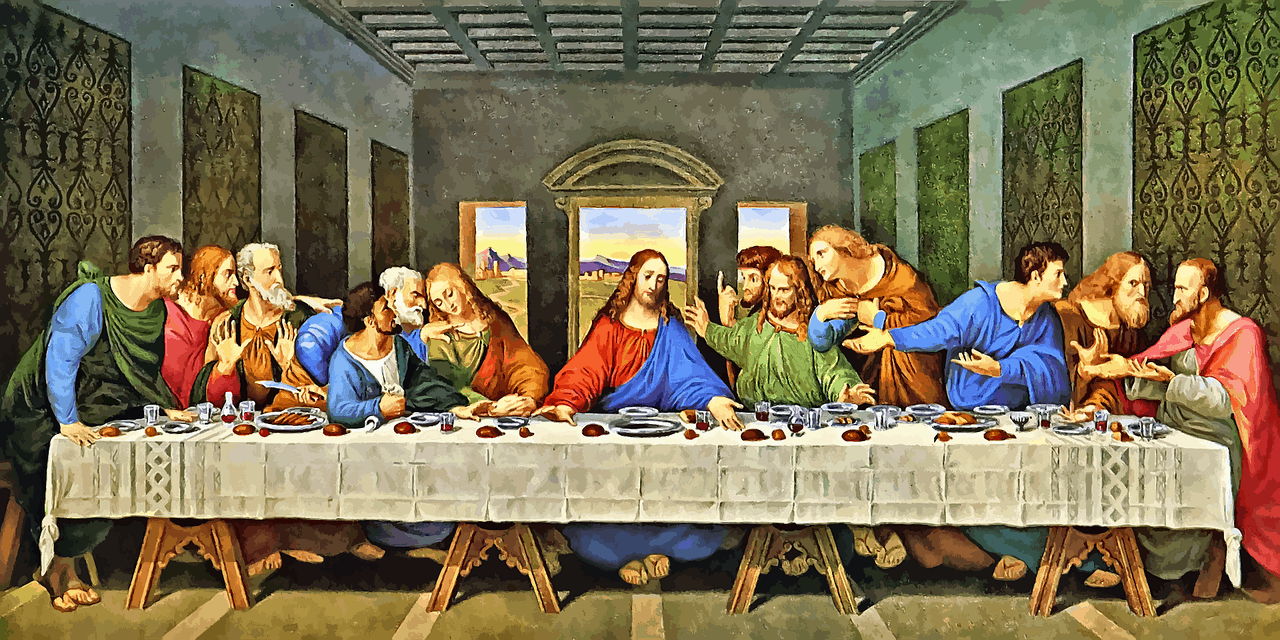 As the last meal before Jesus’ crucifixion, The Last Supper is an important event in Christianity. That said, it’s no surprise that many artists have attempted to portray The Last Supper. However, its most popular version remains to be Leonardo da Vinci’s masterpiece. Although it’s a mural painted from long ago, it’s still one of the most known paintings of all time. Aside from its technical aspects, many mysteries surround this painting. Find out more about it with The Last Supper facts you never knew about.

We all know that the painting was Jesus’ last mealwith his disciples before he got crucified. However, Da Vinci specifically painted it to depict the faces of the apostles’ reactions after Jesus mentioned the betrayal bound to happen.

If you take a closer look, the painting shows the disciples in varying degrees of shock and rage. The painting also captured the moment before the first Eucharist where Jesus took a glass of wine and bread. Eventually, this practice became a key symbol in the Christian sacraments.

The Last Supper is the one of the most iconic paintings in the world. Although we may see a replica of it all around the world, the original painting cannot be found just anywhere else. Due to the painting’s delicate condition, it still lies in its original place at the Santa Maria Delle Grazie, a Dominican convent in Milan, Italy.

Da Vinci completed The Last Supper in 1495, when the early art industry heavily focused on Frescos or mural paintings with water-based paints. One of the least known The Last Supper facts is that it was not actually a fresco.

Da Vinci used his technique in painting the Last Supper.

When painting, your perspective makes or breaks your piece. According to historians, part of the success of Leonardo Da Vinci’s Last Supper was its striking perspective. To capture the perfect angles that make up the scene,  Da Vinci hammered a nail into a wall and tied the canvas to a string with guided marks. How’s that for brilliant The Last Supper facts?

Technicalities aside, one look at the painting can help you appreciate the vivid and realistic expressions of the apostles. Because of this, some theories have claimed that the apostles’ likeness were based on real-life people. Some of these theories suggest that Leonardo Da Vinci painted Judas in the likeness of a criminal. How’s that for mysterious The Last Supper facts?

At its simplest description, The Last Supper portrays Jesus and His apostles at a table. The painting featured his 12 apostles: Bartholomew, James the Lesser, Andrew, Peter, Judas Iscariot, John, Thomas, James the Greater, Philip, Matthew, Jude, and Simon.

However, Da Vinci opted not to paint a halo, possibly due to his beliefs. Some historians suggest that Da Vinci’s choice came from believing nature alone instead of God. As a result, he may have painted everyone as common people.

For many years, scholars and historians have studied Leonardo Da Vinci’s Last Supper painting. According to them, the painting teems with symbolism that you can find just about anywhere. For example, you could see salt spilled from its container near the elbow of Judas. According to scholars, Da Vinci may have been portraying bad luck, religion, or loss. On a brighter note, some interpret it as a symbolism of Jesus as the salt of the earth.

Additionally, an Italian dialect for herring is renga which can also describe someone denying religion. Definitely one of the most interesting The Last Supper facts.

There are still 3 copies from the original Last Supper painting today.

In the early 16th century, three of Leonardo da Vinci’s students made copies of the painting. Da Vinci’s student Giampietrino made the first full-scale copy which can now be found in London’s Royal Academy of Arts. The second one came from Andrea Solari, which now lies in Belgium’s Leonardo da Vinci Museum. Lastly, the third copy by Cesare da Sesto can be found at the Church of Saint Ambrogio in Switzerland.

Aside from its natural decay, The Last Supper has also endured other damages throughout the centuries. In 1652, the construction of a door damaged a big chunk from the artwork – particularly, the feet of Jesus. The wall was further damaged during the 18th Century, when soldiers made the area into a stable. Definitely one of the sadder realities of The Last Supper facts.

One of the coolest The Last Supper facts is that its tickets sell out fast. This just shows how people are still appreciative of art despite the many changes in the world. You can usually secure a viewing for around 2-15 Euros. However, you need to get it 4 months before your actual visit, since it’s a hot item all year round!

Read also: 70 Holy Facts About The Bible That Will Enlighten You

Although the painting is now in a delicate condition, it has not lessened the appeal of the artwork. Instead, the mystery and debate surrounding it has become a legacy of the painting itself. This is just one of The Last Supper facts that prove how nothing is too old nor too young to be a masterpiece.