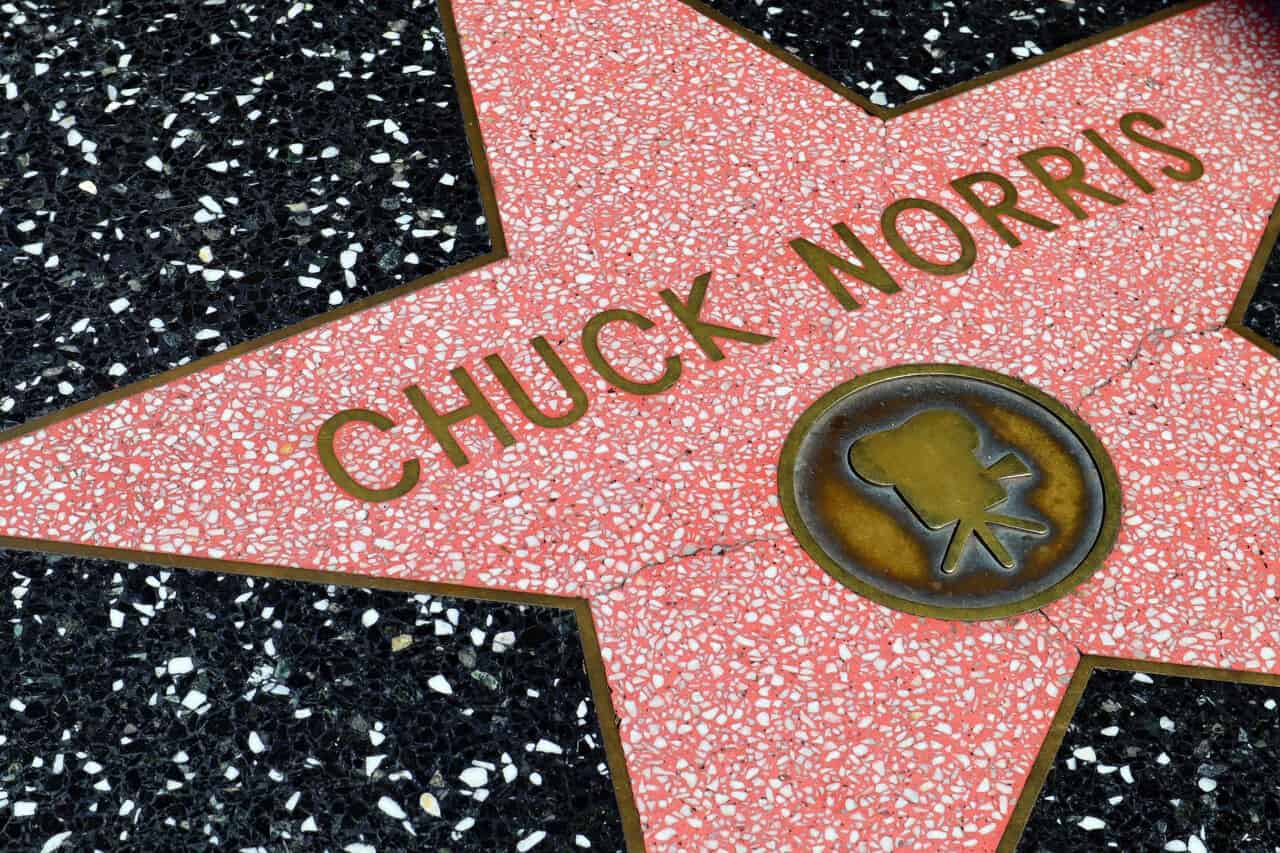 When we think of action movies, we think of big explosions, great fight scenes, and a film full of testosterone. Chuck Norris is one of the many actors that we think of first when we talk about action films. If not, everyone on the internet has encountered a Chuck Norris joke at least once in their lifetime.

However, there is more to this man than just his acting skills. Check out these Chuck Norris facts that mainstream media won’t tell you anymore.

Chuck Norris achieved a cult following on the internet due to satirical jokes about him.

The Chuck Norris jokes mostly involve hyperbolic claims of Chuck Norris’ manliness, attitude, sophistication, and toughness. Since its first appearance in 2005, the jokes slowly turned into its own niche of internet humor.

The jokes became so popular that it has also been translated into several other languages apart from English. The Chuck Norris memes have also influenced advertising, inspiring many localized versions of country-specific ads.

Chuck Norris has acted in all of his feature films except Birdie & Bogey.

As of 2012, Chuck Norris has appeared in around 30 films and several TV shows. However, the only film noted that he has worked on and has not appeared in is Birdie & Bogey.

Instead, Birdie & Bogey was the first and only film Chuck Norris exclusively worked on as an executive producer. How’s that for cool Chuck Norris facts?

There is a Google search bar trick that features Chuck Norris.

A neat Google search Easter egg can be triggered by typing the phrase, “Where’s Chuck Norris” onto the search bar of any Google browser. If a user clicks the ‘I’m feeling lucky’ button, it will launch a prompt that states “Google will not search for Chuck Norris – because it knows you don’t find Chuck Norris, he finds you!”

The web search suggestions may also read “Run before he finds you” or “Try another person”.

Chuck Norris became a meme due to his roles for excessive manliness.

Many believe that the origins of the first few Chuck Norris memes come from a mix of the Vin Diesel Random Fact generator and Chuck Norris’ appearance on the Conan O’Brien show.

Despite constantly being made fun of, Norris’ response to this popular meme is nothing but positive. The actor even included a joke of his own on live television.

The two action stars met during the filming of The Green Hornet and quickly became close due to their similar philosophies and techniques. The two also stayed in the same hotel at the time and continued to bond until late into the night.

Chuck Norris stated that they stayed up all night talking and working out which almost led to him being late for his flight back to Los Angeles.

The actor had a daughter in 1963 as a result of an affair.

In an extensive biography written by the actor himself, he confessed to having fathered a love child back in 1963. He admits to having cheated on his first wife, Dianne with a woman named Johanna in 1962.

According to the biography, he had a physical relationship with this woman in California while he was enlisted in the U.S Air Force in 1991.

Chuck Norris was sentenced to a week in prison for pleading guilty to assault claims that involved an altercation of him stabbing his nephew’s hand. Norris stated that he did not mean to harm the boy, and was only trying to scare him to behave himself.

Apart from the short imprisonment, Norris was also sentenced to community service and attend a substance abuse program. Definitely one of the more unlikely Chuck Norris facts.

Yet another running joke on the internet is how Chuck Norris can’t be beaten by death itself.

The actor has also been featured in numerous TV shows.

Chuck Norris has appeared in several TV programs more times as himself rather than portraying characters. He has also worked as a writer for several of the shows that he has acted in.

Additionally, he has choreographed action scenes for a few of his films as well. Now there’s one for cool Chuck Norris facts.

Chuck Norris once had a partnership with Total Gym, even featuring in their commercials. These infomercials show the actor performing several types of exercises with a single machine.

His mainstream success started in 1984.

Chuck Norris began gaining popularity from his role in the film Missing in Action as well as its sequel. However, many believe that his real success came from his work in the film Code of Silence.

Despite being portrayed as an unbeatable force of nature, Norris only stands 5’8″ tall. This puts the actor below the average American male height of 5”9. Definitely one of the perplexing Chuck Norris facts.

Throughout his life, Chuck Norris had a total of 5 children – including his love child, Dina. Norris’ eldest children from both marriages have already raised kids, leaving him with 13 grandkids in total.

In 2017, Chuck Norris launched a Texas bottled water company. The product was called CForce water which claimed to bring Chuck Norris energy to those who consume it.

Chuck Norris stated that his water was much cleaner than other bottled waters and goes down smoother. It was also stated that part of its sales will be donated towards Kickstarter projects aimed for the youth.

There is an alcoholic drink named after Chuck Norris.

Some alternate versions of the drink also include tabasco sauce as one of its ingredients.

Chuck Norris has a brand of specially-designed Jeans.

The Chuck Norris Action Jeans were branded to give you the best look while on a date or fighting thugs. Originally, the concept first appeared in the Art of Manliness Trunk.

The jeans were designed by Chuck Norris himself to use for stunt fighting in his films. How’s that for fitting Chuck Norris facts?

The Way of the Dragon is Chuck Norris’ best-rated movie as of 2020.

This film also featured his fight against fellow martial artist, Bruce Lee. The Way of the Dragon paved the way for Chuck Norris’ reputation as the Bruce Lee of America.

The fight scene between the two is also considered to be the greatest cinematic fight scene in movie history.

Chuck Norris once endorsed Donald Trump during the general election.

The actor is known to be a large supporter of the Republican Party. Chuck Norris delivered a speech with his wife during a political event in 2016, endorsing GOP nominee Donald Trump.

In 2019, Chuck Norris became the new face of Glock.

While Chuck Norris being the new face of a gun company may fit his image, this received generally negative feedback from people online. The main arguments that surrounded the news involved offensive views on the issues of gun violence and gun control.

The Chuck Norris 5k requires all participants to dress like the actor.

In 2019, the first-ever Inaugural CForce Chuck Norris 5K run was held in Texas on May 4th, selling out in record time. However, unlike other races, participants had to dress up like the actor while completing the race.

The race registration includes a custom Chuck Norris shirt, beard, and belt buckle. Awards were also given to those in the best costume for men, women, and children categories.

Chuck Norris is also a screenwriter.

Chuck Norris has contributed a great amount towards the entertainment industry as an actor, film producer, martial artist, and as a screenwriter. Chuck Norris has also written several books including his autobiography, the Black Belt Patriotism and some religious-themed titles.

The actor was featured in a Romanian-British documentary in 2015.

The documentary was titled Chuck Norris vs Communism and was released in January of 2015. It ran for 78 minutes long and was available in the United Kingdom, Romania, and Germany.

The actor’s first wife, Dianne Kay Holechek, was also a classmate of Chuck Norris when they were children. The couple married in 1958 and were married for 30 years before filing for divorce.

Chun Kuk Do was founded by Chuck Norris.

The martial arts style was established in 1990. Chun Kuk Do is based on traditional Taekwondo styles such as Tang Soo Do and Moo Duk Kwan.

Its Korean name translates to “The Universal Way” in English. The governing body for this martial arts style in the United Fighting Arts Federation (UFAF).

Chuck Norris has a video game of his own.

The actor launched his own smartphone game in 2017 and was made available on both iOS and Android platforms. Nonstop Chuck Norris was published by the German mobile game company, Flaregames.

The game allows players to take on the role of Chuck Norris’ sidekick and defeat an infinite hoard of opponents.

The actor is also known for his contributions to the Make a Wish Foundation.

Chuck Norris is well known for lending a helping hand towards foundations such as Funds for Kids, the Veterans Administration National Salute to Hospitalized Veterans, and United Way. He has not only made several donations to several causes but has also established many fund-raising activities.

Chuck Norris is the author of several Christian-themed books.

The actor considers himself a devoted Christian and supports the intelligent design movement. His literary works include A Threat to Justice and The Justice Riders.

He was named Fighter of the Year in 1969 by Black Belt Magazine.

Chuck Norris has been featured in Black Belt Magazine in several issues. However, he was only given the honor of Fighter of the Year in 1969.

Chuck Norris appeared in advertisements for the game World of Warcraft in 2011.

Blizzard Entertainment hired Chuck Norris for a World of Warcraft commercial in 2011. The ad was made as part of a seventh anniversary celebrated on November 23.

The actor has appeared in several talk shows during the peak of his career with known hosts such as David Letterman and Arsenio Hall. He has also appeared in more modern and well-known talk shows such as Late Night with Conan O’Brien where they discussed the trending ‘Chuck Norris’ jokes.