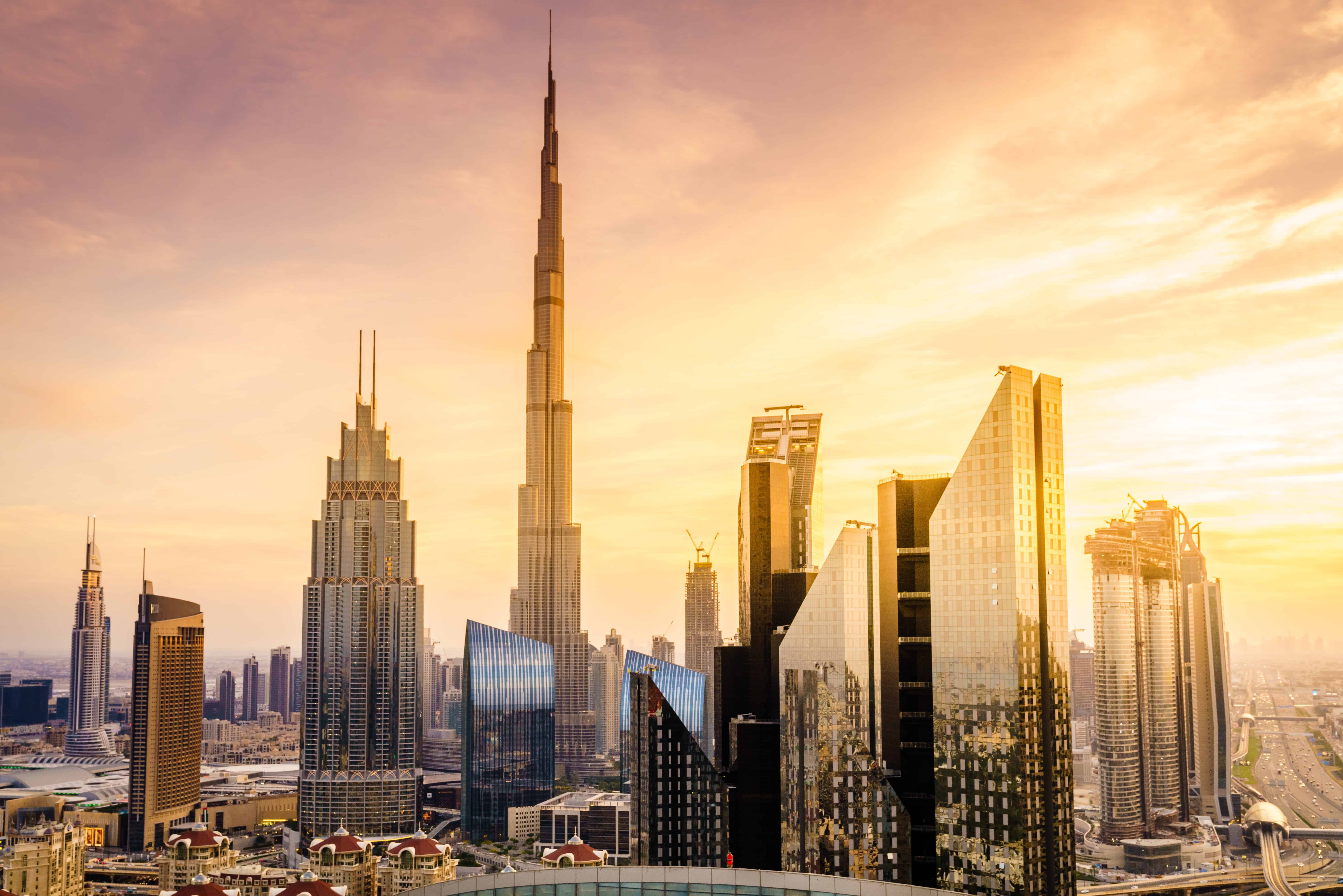 Dubai takes great pride in the Burj Khalifa, and they have every right to. It is a marvel of engineering and architecture, an example of the promise of the 21st century. But those are just words, and here are some Burj Khalifa Facts to add meaning to them. 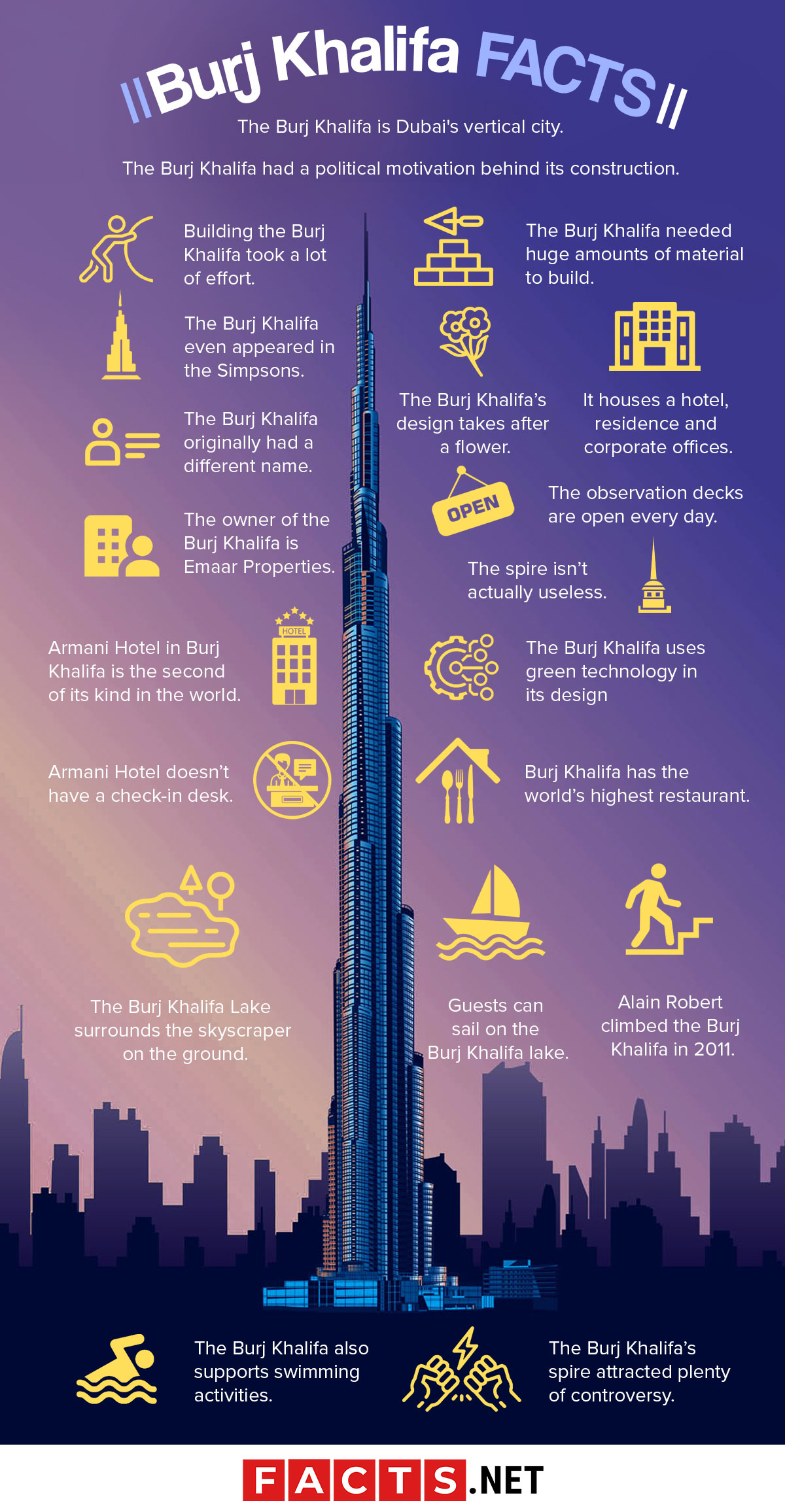 The Burj Khalifa had a political motivation behind its construction.

It’s not as bad an example of Burj Khalifa facts as it actually sounds. At the time, the UAE completely depended on the export of oil to support its economy. The government realized how dangerous this was, as any large drop in the price of oil could devastate the economy. So they worked to diversify the economy beyond exporting oil, with the building of the Burj Khalifa just part of the effort to do so.

Building the Burj Khalifa took a lot of effort.

The Burj Khalifa needed huge amounts of material to build.

The concrete alone amounted to 330,000 m³, or the equivalent of 100,000 elephants. In addition, the Burj Khalifa used no less than 10 km worth of steel bars to reinforce the concrete. The skyscraper also needed another estimated 3000 metric tons of aluminum to build. Talk about a heavy example of Burj Khalifa facts.

In particular, temperatures in the UAE can go over 45 degrees Celsius in the daytime. For this reason, designers added a silver coating to the outside of the skyscraper. The silver coating reflects excess light and heat from the building, keeping it from getting too hot. A rather flashy example of Burj Khalifa facts.

The Burj Khalifa’s height made it more dangerous than normal to build.

In particular, workers and other people who needed to use the temporary elevators had to sign waivers. They also had to take special training, specifically to learn how to make emergency landings in case the elevators failed.

The owner of the Burj Khalifa is Emaar Properties.

Emaar Properties is a real estate company in Dubai. They are also the owner behind the Dubai Mall, the world’s second largest shopping mall.

The Burj Khalifa’s design takes after a flower.

Specifically, the Hymenocallis flower, or the Spider Lily. This flower has a thin central stalk that branches out into several narrow petals from its upper end. In the case of the Burj Khalifa, you can see the resemblance when looking at the skyscraper from above. The narrow central spire stands on a cluster of blocks towards the bottom, resembling a Spider Lily turned upside down.

Unsurprising, considering 10,000 people live and work in the Burj Khalifa at any one time, it is worthy of being known as a city itself. Even then, the skyscraper still isn’t at its full capacity. At its maximum, it can support up to 35,000 people in this skyscraper.

It houses a hotel, residence and corporate offices.

Armani Hotel takes up most of the lower levels, followed by residences in the middle levels. Corporate offices start from levels 111 onwards, including 3 observation decks at levels 124, 125 and 148, and a restaurant on level 122.

The observation decks are open every day.

There are two ticket types, one with access to Levels 124 and 125, and the SKY option with additional access to the exclusive Level 148 observation deck.

Armani Hotel in Burj Khalifa is the second of its kind in the world.

This is a deliberate decision on the part of the hotel owner, Giorgio Armani. Specifically, he wanted his guests to feel like going home when they checked into his hotel. He meant for the lack of a check-in desk to reinforce this feeling.

The Burj Khalifa’s residential block offers up to 4-bedroom apartments.

The restaurant At.mosphere is located on Level 122 of the Burj Khalifa, about 144 meters from the ground. There, guests can enjoy luxury dining in comfort, with specials including ingredients like oysters and caviar. In addition to fine dining luxuries, they also enjoy a view only possible at such heights above the ground.

The Burj Khalifa Lake surrounds the skyscraper on the ground.

Covering an area of 120,000 m², the artificial lake also includes a choreographed fountain system that holds the record for being the world’s second largest. The fountain’s water show takes place every Wednesday to Sunday, starting at 6 PM in the evening and lasts for 30 minutes.

Guests can sail on the Burj Khalifa lake.

Guests will ride on abra boats, wooden boats traditionally used to ferry people short distances in the Middle East. That said, while ferries traditionally charge only 1 AED per person, the abra cruises for the Burj Khalifa lake charge much higher.

The Burj Club Gym offers a semi-Olympic size indoor pool for members, as well as an outdoor pool on the terrace. For swimmers who prefer a natural environment, the Jumeirah Beach is only 10 minutes away from the Burj Khalifa.

You can find the world’s 2nd highest swimming people in the Burj Khalifa.

This comes from how the spire is essentially just dead weight. It has no floors of its own, with critics claiming it’s there just to add another estimated 200 meters to the Burj Khalifa’s height. Regardless of the controversy, the spire is also 1 of the most visible parts of the Burj Khalifa. After all, people can see the spire from as far away as 100 km away.

It actually houses all of the Burj Khalifa’s communications equipment. Despite what the critics might say, the skyscraper’s designers stand by their design.

The Burj Khalifa also faced another controversy during construction.

Specifically, migrant workers from various South Asia countries were hired to build the Burj Khalifa. Amidst 4 deaths occurring from construction workplace accidents and accusations of low pay, the building’s contractors faced accusations of exploitation from the media.

The temperature on top of the Burj Khalifa is lower compared to at ground level.

On average, the temperature at the Burj Khalifa’s highest point is lower by up to 15 degrees. This is due to the sheer height of the structure, the thinner air at such a level holds less heat than on the ground.

There’s also a time difference between the ground and the Burj Khalifa’s highest point.

The Burj Khalifa hosts large amounts of art inside it.

The many artworks in the Burj Khalifa include the World Voices.

Spanish artist Jaume Plensa designed and created the World Voices specifically for the Burj Khalifa. He made this artwork using 196 cymbals made from gilded brass and bronze, representing all 196 nations in the world. Drops of water slowly but steadily fall from the ceiling, making unique sounds as they rain down on the cymbals.

Burj Khalifa’s elevators are among the fastest in the world.

It’s not actually the fastest, though, ranking only at 3rd place. That said, it’s still very fast for all that, able to reach a speed of 10 meters per second. At that speed, it’s possible to reach the observation deck at Level 124 from the ground in just 1 minute.

You can still use the Burj Khalifa’s elevators in case of an emergency.

The Burj Khalifa has appeared in a Mission Impossible movie.

And not just as a passing sight, even. That movie was Mission Impossible: Ghost Protocol, with Ethan Hunt (played by Tom Cruise) climbing along the skyscraper’s exterior. It wasn’t CGI or even a scale model, either. The scenes where Hunt climbs the Burj Khalifa were all filmed on location at the actual skyscraper itself.

The Burj Khalifa even appeared in the Simpsons.

Specifically, it appeared in the episode You Only Live Once. It parodies the previous fact, that of Mission Impossible’s Ethan Hunt climbing the Burj Khalifa. The episode doesn’t actually name the skyscraper as the Burj Khalifa, but it uses the same appearance.

In the episode, one of Homer Simpson’s friends convinces him to go skydiving so as to actually experience it once in his life. He climbs the Burj Khalifa lookalike in the episode in order to skydive off its roof. Talk about an unusual example of Burj Khalifa facts.

A CGI version this time, and in a rather uncomfortable way. Specifically, the alien invaders tore the Burj Khalifa out of the ground along with much of the surrounding city. They then threw the ruins at London, with the Burj Khalifa appearing like a spear thrown into the River Thames.

A military base once stood on the ground where the Burj Khalifa now stands.

A strange, but true, example of Burj Khalifa Facts. That was the Central Military Command, from where the UAE’s leaders commanded their entire military. After the military moved to a new location, they sold the ground the former military base stood on, eventually leading to the Burj Khalifa’s construction on the site.

Alain Robert is a French free solo climber, whose career involves climbing skyscrapers and other urban constructions with only a minimum of equipment. This led to him earning the nicknames of the French Spiderman, and the Human Spider. Though he did many of his climbs without government permission, in the case of the Burj Khalifa, he had received permission beforehand. In order to receive the permission, Robert had to use a rope and harness to climb the Burj Khalifa with.

People have jumped off the Burj Khalifa before.

No, it wasn’t to commit suicide. In 2014, Fred Fugen and Vince Reffet conducted the world’s highest BASE Jump from the Burj Khalifa’s highest point. They made the jump with no accidents or injuries, successfully using parachutes to land safely after a freefall.

The Burj Khalifa originally had a different name.

That name was the Burj Dubai, which is the Dubai Tower. Upon completion, however, the skyscraper instead received the name it currently has, Burj Khalifa, that is Khalifa Tower. The name honors Khalifa bin Zayed Al Nahyan, the ruler of Abu Dhabi, who paid for much of Dubai’s debts in the 2000s out of his personal fortune.

The Burj Khalifa once held a fireworks display every year.

26,000 glass panels line the outside of the Burj Khalifa.

It also takes no less than 3 months to clean them all. Therefore, once the cleaners have finished cleaning them all, they can start all over again. That way, they can keep the panels as clean as possible without needing to clean them every day.

The Burj Khalifa uses green technology in its design.

The Burj Khalifa uses even more water beyond just its gardens.

In fact, the building alone uses an estimated 1 million liters of water per day, piped through 100 km of piping. Another 213 km of piping is reserved for emergency use by the building’s fire control systems.

The Burj Khalifa returned the title of the world’s highest building to the Middle East.

The Burj Khalifa already faces a challenger to its title of the highest building in the world.

That challenge comes from the still-incomplete Jeddah Tower in Jeddah, Saudi Arabia. Once completed, Jeddah Tower will stand no less than 1 km high. That said, economic difficulties and, most recently, the COVID-19 pandemic have delayed construction. As such, expectations set the Jeddah Tower’s completion not until 2023 at the latest. So the Burj Khalifa can expect to keep its title for a while longer yet.