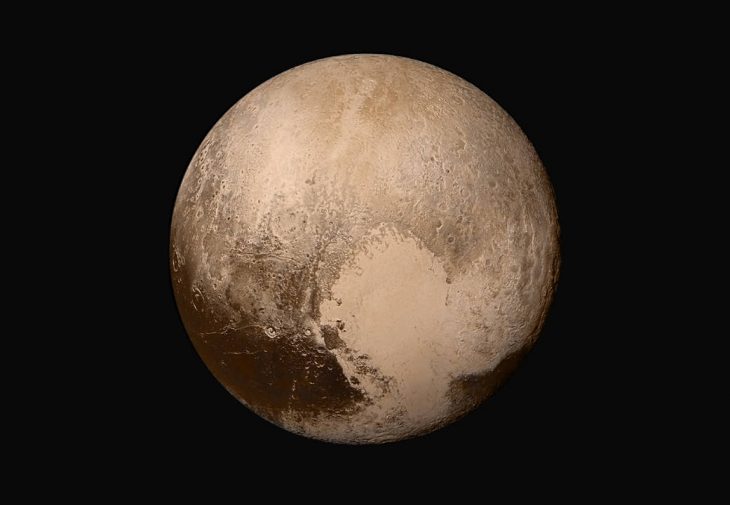 While humans have made numerous discoveries within our solar system, there is still a plethora of things that remain unknown. The planets are one of the biggest discoveries of the universe. Traditionally, science recognized 9 planets until they demoted Pluto in 2006. Until now, the scientific community still debates on Pluto’s demotion. So, is Pluto a planet or not?

Find the answer to that and many more questions with these Pluto facts.

Quick Facts
Essential Facts
Interesting Facts
Table of Contents
01 Pluto Facts Infographics
02 Clyde Tombaugh discovered Pluto when he was only 24.
03 Interlocking letters P and L serve as the official symbol for Pluto.
04 The name ‘Pluto’ came from an 11-year-old girl.
05 As per Burney’s suggestion, ‘Pluto’ shall be named after the Roman god of the underworld.
06 Pluto is one of many miniature icy worlds in the Kuiper Belt.
07 Pluto became a ‘dwarf planet’ in 2006.
08 Aside from Pluto, another dwarf planet in the solar system is the Ceres planet.
09 People have petitioned for Pluto to be recognized as a planet again.
10 Disney named Pluto the Pup after the dwarf planet.
11 Pluto did not qualify for the de facto planet definition.
12 Pluto’s surface consists of craters, mountains, valleys, and plains.
13 Some of the interesting features of Pluto are its mountains of big water ice blocks.
14 Pluto has a heart-shaped glacier called Tombaugh Regio.
15 Pluto is the only known dwarf planet to have an atmosphere it.
16 Pluto was in perihelion from 1979 to 1999.
17 Pluto’s atmosphere adapts to the dwarf planet’s distance from the sun.
18 The extreme cold in Pluto makes it unlikely for life to exist on the dwarf planet.
19 Pluto color consists of a range of different varieties.
20 Pluto spins the opposite direction of the Earth’s course.
21 Pluto completes its rotations on its side.
22 Pluto has 5 moons.
23 Charon is the largest Pluto moon.
24 The other 4 moons are much smaller at only >100 miles wide.
25 Charon’s orbit around Pluto takes as long as Pluto’s rotation - 153 Earth hours.
26 The Pluto-Charon pair forms a binary system.
27 New Horizons made history as the first vessel sent for the sole purpose of studying Pluto.
28 New Horizons took 9 years to reach Pluto.
29 New Horizons carried the ashes of Clyde Tombaugh.
30 The intensity of sunlight in Pluto is equivalent to the intensity of moonlight on Earth.
31 How far Pluto is from Earth varies with time.

Clyde Tombaugh discovered Pluto when he was only 24.

Before Pluto’s discovery, astronomers noticed a shift in the orbits of Neptune and Uranus due to the gravity of an unknown object. Clyde Tombaugh dedicated his time observing the night sky at the Lowell Observatory in Flagstaff, Arizona. Finally, he confirmed the existence of Pluto on February 18, 1930 at the age of 24.

Interlocking letters P and L serve as the official symbol for Pluto.

Aside from being the first letters of the dwarf planet, they are also the initials of American astronomer Percival Lowell. His initiation for searching for a planet beyond Neptune led to the discovery of Pluto. The Lowell Observatory that Tombaugh was working in was named after Percival.

The name ‘Pluto’ came from an 11-year-old girl.

Venetia Burney from Oxford, England suggested the name after the 1930 discovery. Her grandfather then forwarded it to the Lowell Observatory. When it got selected, Pluto became the first and only planet named by an 11-year-old girl. Now that’s one for unexpected Pluto facts.

As per Burney’s suggestion, ‘Pluto’ shall be named after the Roman god of the underworld.

Pluto is one of many miniature icy worlds in the Kuiper Belt.

Other names for these icy and rocky bodies are ‘plutoids,’ ‘transneptunian objects,’ or ‘Kuiper Belt objects.’

The discovery of Pluto being a ‘plutoid’ in the Kuiper Belt costed its spot as the 9th planet of the solar system. Hence, Pluto’s planet status only lasted for 76 years.

Aside from Pluto, another dwarf planet in the solar system is the Ceres planet.

Other solar system objects under the same category are Eris and Makemake. As their label suggests, these ‘dwarf planets’ are much smaller in size compared to the major planets.

People have petitioned for Pluto to be recognized as a planet again.

The decision made in the year 2006 witnessed widespread outrage on behalf of Pluto. Along with the updates of the textbooks came the onslaught of several internet-spawned memes picturing Pluto going from angry to sad in a range of emotions.

Disney named Pluto the Pup after the dwarf planet.

Pluto debuted in 1930 as a faithful companion to Mickey Mouse. As it was the same year of Tombaugh’s discovery of the planet, there were speculations that the multinational entertainment conglomerate aimed to capitalize the dog on the planet’s popularity.

Pluto did not qualify for the de facto planet definition.

If you’ve ever wondered why Pluto isn’t a planet anymore, look no further: As per NASA, a ‘planet’ must “orbit a star, be big enough to have enough gravity to force it into a spherical shape, and be big enough that its gravity cleared away any other objects of similar size near its orbit around the Sun.”

Still, some astronomers appeal for Pluto’s classification as a planet due to its atmosphere, clouds, cores, geology, moons, polar caps, and seasons.

Some of the interesting features of Pluto are its mountains of big water ice blocks.

These peaks can reach heights of 6,500-9,800 ft or 2-3 km. Sometimes, frozen gases such as methane coat these ice mountains. Moreover, the longs troughs and valleys in Pluto can stretch up to 370 miles or 600 km.

With Pluto being relatively smaller the Earth’s moon, the Tombaugh Regio is approximately the size of Oklahoma and Texas. ‘Tombaugh’ honors the discoverer of the planet while ‘Regio’ is the Latin term for ‘region.’ Aside from having blue skies, spinning moons, and mountains as high as the Rockies, Pluto also has snow but in red.

Pluto is the only known dwarf planet to have an atmosphere it.

However, Pluto’s atmosphere is too thin and toxic to human breathing. When Pluto is closest to the sun (perihelion), its atmosphere is gas. Otherwise, Pluto farthest from the sun (aphelion) has a freezing atmosphere that falls like snow.

Aside from being in its closest to the sun, Pluto also crossed the orbit of Neptune. It means that Pluto came closer to the sun than Neptune during this time, making Neptune the farthest planet from the sun as well. How’s that for strange Pluto facts?

Pluto’s atmosphere adapts to the dwarf planet’s distance from the sun.

With a similar effect of a comet, the atmosphere expands when Pluto comes closer to the sun and collapses as it moves farther away. The main variables are molecular nitrogen, but there were methane and carbon monoxide molecules detected, too.

The extreme cold in Pluto makes it unlikely for life to exist on the dwarf planet.

Water would only turn into solid ice at such cold temperatures. Hence, the absence of such a life essential is an automatic minus point. Still, some scientists believe in the possibility of an ocean deep inside Pluto. Now that’s one for intriguing Pluto facts.

Pluto color consists of a range of different varieties.

Pluto spins the opposite direction of the Earth’s course.

In other words, the sun rises in the west and sets in the east on the plutoid. Other planets with the same retrograde rotation are Uranus and Venus. Definitely one of the Pluto facts that’ll show you how different it is from Earth.

Pluto completes its rotations on its side.

Pluto’s moons are Charon, Hydra, Kerberos, Nix, and Styx. A theory claims that the formation of this moon system originated from a collision between Pluto and another similar body in the early history of the solar system.

Charon is the largest Pluto moon.

Being about half the size of the dwarf planet, Charon became the largest satellite in terms of relativity to its planet. There have even been frequent references of Pluto and Charon being a ‘double planet.’ This is definitely one of the cooler Pluto facts.

The other 4 moons are much smaller at only >100 miles wide.

Unlike Charon, they are not spherical and has irregular shapes. They are also different from other solar system moons in a way that there are in no tidal locks with Pluto. Moreover, these 4 moons spin without keeping the same face towards Pluto.

In other words, Charon neither rises nor sets on the planet. Instead, the moon hovers over the same spot on the surface of Pluto. Charon faces Pluto with the same side as it is in a state called ‘tidal locking.’

It means that Pluto’s and Charon’s center of mass is outside Pluto. Hence, the dwarf planet moves in small circles while the moon orbits it.

New Horizons made history as the first vessel sent for the sole purpose of studying Pluto.

Despite costing roughly $700 million, New Horizons is just the size of a grand piano and weighs 1,000 lbs.

Launched in January 2006, the robot spacecraft only arrived at Pluto in July 2015. It snapped the closest pictures of the dwarf planet at about 6,000 ft. away. Moreover, New Horizons would proceed to study other Kuiper Belt objects by 2018-2022.

As the astronomer who discovered Pluto, Tombaugh was honored in a strange but fitting way. In death, Tombaugh came close to his discovery in the form of cremated ashes aboard the New Horizons vessel.

The main reason behind it is how the dwarf planet sits too far from the sun on its location in the outer solar system at approximately 5,945,900,000 km. How’s that for Pluto facts?

How far Pluto is from Earth varies with time.