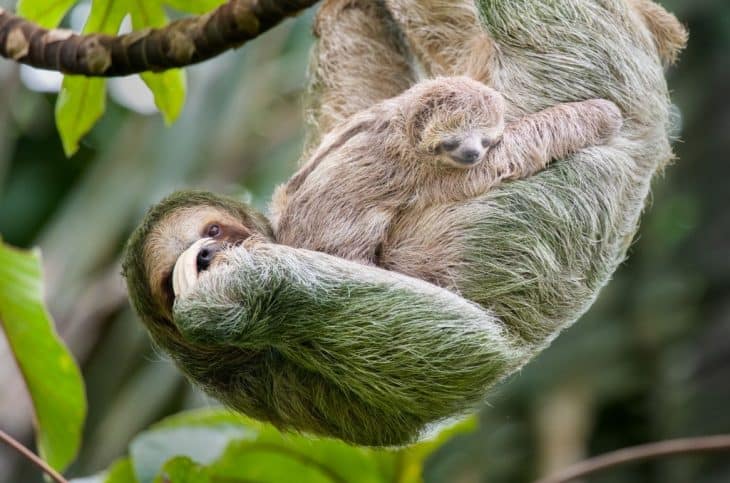 Sloths are social media darlings. They are in viral videos and memes- they even make celebrities cry! The slowest animal on the planet is native in Latin America rainforests where they spend their days sleeping and hanging upside down on trees. But there is so much more to discover about sloths than just being couch potato gods in the modern world. Get ready to see these sloth facts you most probably did not know.

Quick Facts
Essential Facts
Interesting Facts
Table of Contents
01 Sloth Facts Infographics
02 Although sloths are classified as two-toed or three-toed, both have three toes.
03 Ancient sloths were as big as elephants before.
04 A sloth's fur has natural camouflage.
05 Sloths spend 90% of their life hanging upside down on trees.
06 It takes 30 days for sloths to digest a leaf.
07 A sloth's head can turn to almost 270 degrees.
08 Although they are slow on land, sloths can swim fast.
09 Sloths can hold their breath for 40 minutes straight.
10 A sloth only has a smiling face.
11 When sloths are held during photo sessions, they may feel fear and stress.
12 Sloths risk their life when they poop.
13 When they poop, one-third of a sloth's body weight drops.
14 Baby sloths can live on their own after 6-11 months.
15 Sloths have short tails.
16 Sloths have sharp and hard teeth.
17 A sloth's metabolism makes them very slow.
18 Pygmy sloths are critically endangered species.
19 Sloths can grip in trees even after death.
20 A sloth in Panama was mistaken as an alien.
21 Sloths are affected by wildlife trafficking.
22 Stinking and sweating are not a problem for sloths.
23 Different sloth species have different sleeping patterns.
24 Sloth translates to slow and lazy.
25 Mating takes only 5 seconds for sloths.
26 Sloths perform a poo dance.
27 Farting is not a sloth's thing.
28 There is a game night with a sloth commercial.
29 Sloths have poor eyesight.
30 Baby sloths lick their mother's lips.
31 Sloths suffer from habitat destruction. 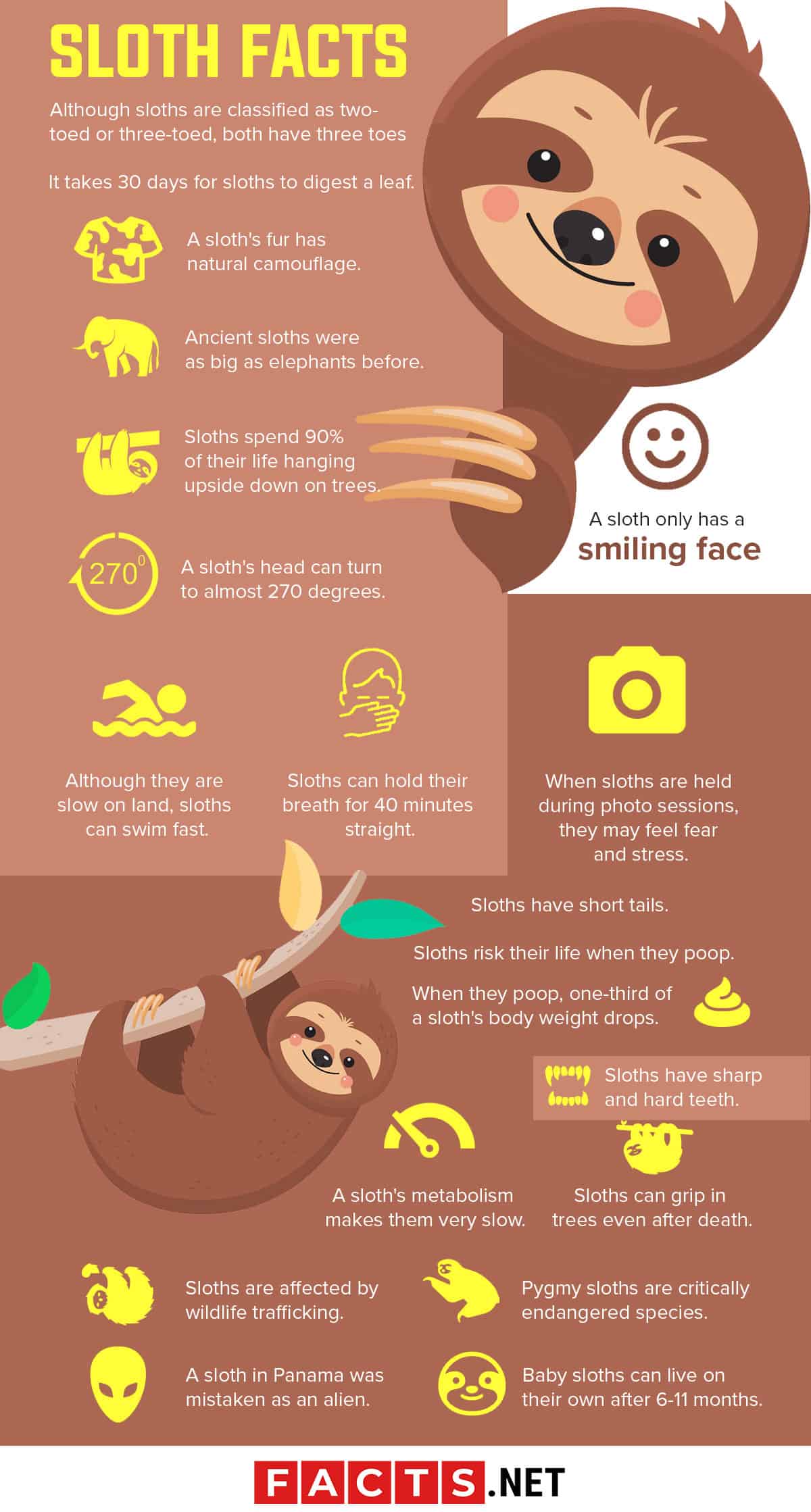 Although sloths are classified as two-toed or three-toed, both have three toes.

One of the lesser-known sloth facts is that all sloth species actually have three claws or toes. The two-toed species only has two claws on their front legs, but three on their back legs. Whereas the three-toed sloths have three at both the front and the back.

Ancient sloths were as big as elephants before.

According to San Diego Zoo, sloths from 10,000 years ago possibly reached an elephant’s size. Skeletons from the extinct species called “Megatherium” were found which led to this theory.

A sloth's fur has natural camouflage.

Since green algae naturally grow on a sloth’s fur for water and shelter, the algae provide natural camouflage for sloths and give off extra nutrients and vitamins via the sloth’s skin.

Sloths spend 90% of their life hanging upside down on trees.

Sloths have impressive biology with their organs being attached to rib cages. This means that they are weightless down to the lungs making it easy for them to hang and breathe naturally in an inverted position.

It takes 30 days for sloths to digest a leaf.

One of the most known sloth facts is that they are the slowest animal in the world. That also includes digesting food! A sloth’s stomach has multi-compartments which allows them to digest the cellulose that they consume, and that takes no less than 30 days.

A sloth's head can turn to almost 270 degrees.

The base neck of a sloth has an extra vertebra which gives them a 270 degrees view in their surroundings. Even though they are defenseless mammals, this advantage gives them the benefit of a defensive mechanism.

Although they are slow on land, sloths can swim fast.

Their long claws make it hard for them to walk on land. Their 1 foot per minute crawling proves it so. Surprisingly, sloths move faster three times more than their regular pace in the water. Definitely one of the amazing sloth facts you never expected.

Sloths can hold their breath for 40 minutes straight.

When sloths suppress their metabolism, their heart rate falls into a third of its regular speed. This allows them to halt their breathing in the water for 40 minutes while conserving their energy.

A sloth only has a smiling face.

Regardless if they are feeling stressed or in pain, their facial structure would always give off a smiling appearance. This is the reason why they are commonly used as wildlife subjects as some tourists deem their normal reactions as contented or happy. It’s one of the sloth facts that we may find disturbing.

When sloths are held during photo sessions, they may feel fear and stress.

Wild sloths are accustomed to sleepy and quiet lives. They are also solitary creatures and when they are surrounded by constant noise and poor handling by tourists and guides, they may experience high levels of anxiety.

Sloths risk their life when they poop.

Since their food is processed slowly, sloths tend to use the toilet only once a week. This means that they need to go on the ground and do their business of letting out the “big production”. They will be exposed to predators and jungle hazards since they move very slowly- not to mention that defecating for them is like a human giving birth.

When they poop, one-third of a sloth's body weight drops.

Constipation is normal for them since they cannot digest their food easily. Once they let it out, you can see that their stomach shrinks automatically and drops a big portion of their weight. A turd of poop weighs at least 2 pounds and they excrete two or more depending on how big they need to go. Are you surprised that sloth facts could get interesting as this?

Baby sloths can live on their own after 6-11 months.

Depending on the sloth species, a young sloth could already afford to be separated from its mother at around 6- 11 months. Some would leave their birthplace to find their territories while some sloth species prefer to live near within a close range to their home tree or area.

Although their tails are not that easy to locate, all sloth species have stubby and short tails. Some animal experts would most likely call it a snout as it has a length of around 3-5 cm only.

Sloths have sharp and hard teeth.

Their primary defense is their claws but when it’s needed, they have very sharp and strong teeth that could nip or bite predators away as a warning.

Their slow metabolism makes them the slowest-moving animal on the planet. Their normal body weight has only a metabolic rate of 25-30%, which is not even half of what their body needs! With this, they need to be frugal on their use of energy and conserve it through very slow movements. It’s one of the sloth facts that we have been waiting for.

Although not all sloth species are threatened for extinction, Pygmy, which is a three-toed sloth that can only be found on an island in Panama is considered to be endangered due to environmental and natural factors.

Sloths can grip in trees even after death.

They spend most of their lifetime in trees and we can expect that sloths have strong muscles and limbs, not to mention their strong claws. The tree could keep them in balance for long periods even after they die.

A sloth in Panama was mistaken as an alien.

A group of teenagers in Panama City beat a sloth to death with sticks and rocks as they thought of it as an alien. The biopsy revealed that it was a three-toed sloth that has been in a river accident which caused its hair loss and made its skin look translucent.

Sloths are affected by wildlife trafficking.

Sloths are cute and adorable but they are not suited as pet animals as their diet and lifestyle need them to be constantly in tune with nature and trees. Despite this, they are still obtained through mostly illegal animal trafficking and it’s one of their major threats.

Stinking and sweating are not a problem for sloths.

Unlike other mammals, sloths do not smell weird nor do they sweat. It’s a defense mechanism allowing them to avoid being detected by their predators. But, this does not mean that they are not dirty! They have bugs, insects, and algae living in their fur and coats.

Sloth translates to slow and lazy.

Their name is derived from their nature of being slow to their feet. Although the lazy part proves to be a common misconception as they sleep just like humans for around 8-10 hours a day.

Mating takes only 5 seconds for sloths.

All the parts that make mating essential for sloths are only done within 5 seconds. It’s the fastest thing that a sloth can do.

Pooping is a big thing for our furry friends. And when they do, they pick a spot on the ground, do the poop dance by swaying side to side and then they bury it to the ground.

Farting is not a sloth's thing.

Since a sloth’s digestive system is very slow, it cannot fart. The methane microbes from the food that they eat are absorbed into their bloodstream and they simply breathe it out. It’s definitely one of the sloth facts that will prove fart breath is possible!

There is a game night with a sloth commercial.

Geico Company launched a 30-second advertisement featuring a sloth that draws at a very slow pace while neighbors tensely guess what it was. The drawing was painfully slow, by the way.

They possess eyesight and color vision but most of it is very poor. Sloths hardly use it for foraging or climbing instead, they use their sense of touch and smell to do most of the work.

A mother sloth is very protective of its baby and one way of raining it is to teach the baby sloth on what to eat. With this, baby sloths lick their mother’s lips and eat from there and eventually, they adapt their Mom’s diet.

Sloths are not domestic animals and they live comfortably in rainforests, jungles, and in the wild. Treetops are their main habitat and with serious threats of deforestation becoming more evident, sloths need our help to make a stand and make better choices. Definitely, one of the sloth facts we can’t just simply ignore.