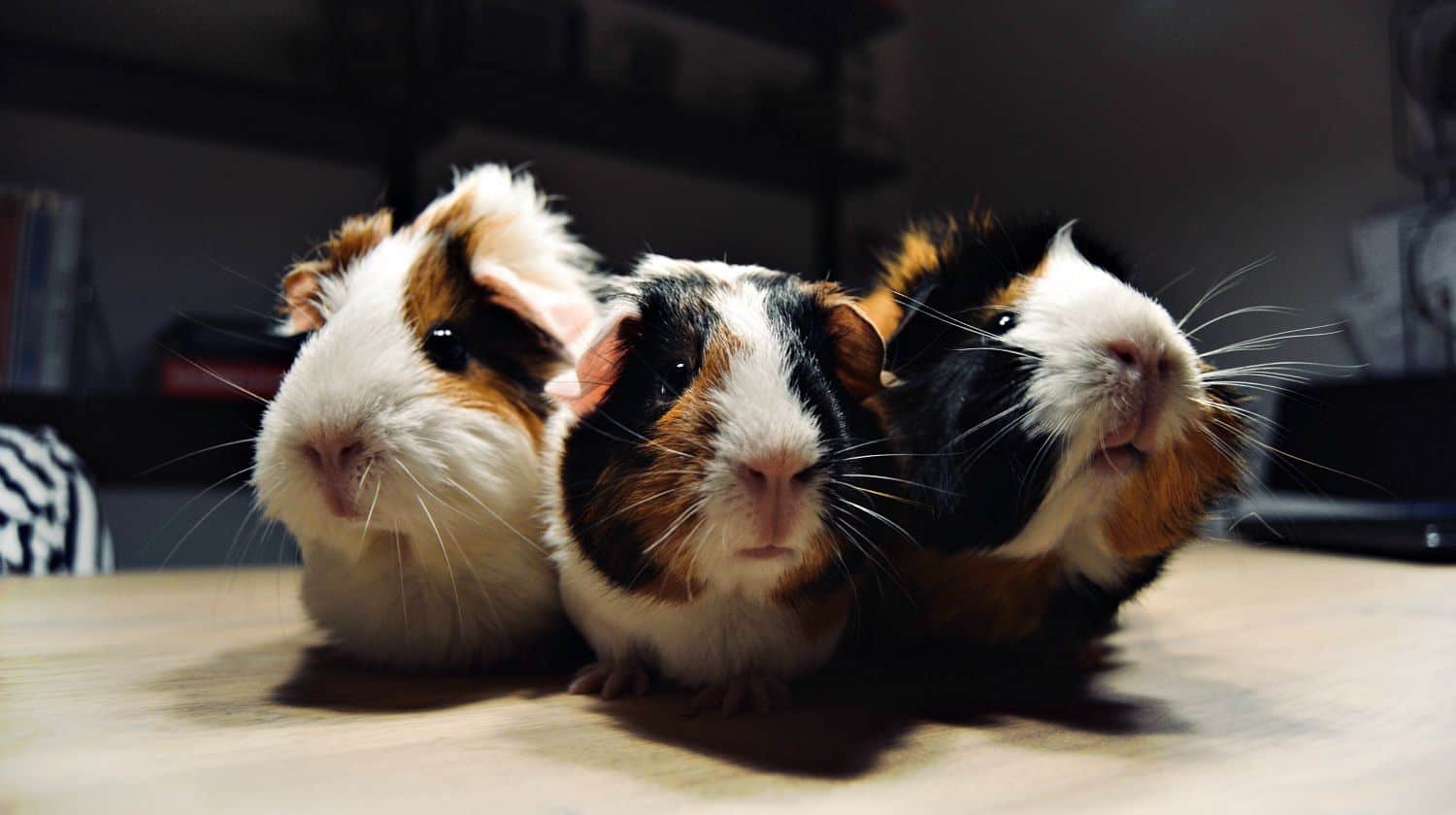 So you want to keep guinea pigs as pets? Then here are some guinea pig facts to help you get ready for them.

From their name, you probably think Hairless guinea pigs don’t have any fur at all. They do still have a little bit of fur. There are two varieties, the Skinny and the Baldwin. The Skinny’s fur is on their feet and face. The Baldwin is born with a full coat of fur, but shed them during adulthood, leaving only patches around their feet.

Out of all guinea pig breeds, the American guinea pig is the most common.

Despite the name, Abyssinian guinea pigs aren’t actually from Abyssinia.

One of the little-known guinea pig facts: Abyssinian guinea pigs aren’t from Abyssinia at all. Why the breed received that name isn’t known either.

Guinea pigs eat their own feces.

Have you ever wondered, “What do guinea pigs eat?” Well, the answer just might surprise you: Guinea pigs eat their poop. They defecate soft pellets called cecotropes. Eating these cecotropes allows a guinea pig to recycle B vitamins and fiber. Aside from their poop, the guinea pig diet consists of hay, pellets, and small amounts of fresh vegetables and fruit.

The Tribbles appear in the 1967 episode “The Trouble with Tribbles” of Star Trek. They were faceless, fur-covered, and non-mobile animals which you can hold in one hand. Their role in the episode was based on the role of guinea pigs in the novel Pigs is Pigs.

Guinea pigs usually only live for 8 years. According to the Guinness Book of World Records, one guinea pig was able to live for almost twice that long.

The Texel guinea pig is famous for its long and curly fur. An exception is around its face, where the Texel’s fur is shorter and coarser.

Silkie guinea pigs look like they have a teardrop shape when seen from above.

A Silkie guinea pig has a long and smooth coat that flows back along its body. The fur is also longer to the rear compared to the rest of the body.

You can tell the variety of a Teddy guinea pig from the texture of their fur. The harsh coat has a coarse texture to their fur, while the plush coat’s fur has a softer texture.

You can find those points around the face, ears, and feet of the guinea pig. Himalayan guinea pigs are born solid white, with the colored points appearing in a few weeks.

A guinea pig appears in the Chronicles of Narnia.

In The Magician’s Nephew, Andrew Ketterly experimented on guinea pigs. One of them reached Narnia after an experiment with a magic ring.

A talking guinea pig appears in the film Dr. Dolittle.

Did you know the character Rodney in the 1998 film Dr. Dolittle is a guinea pig? American comedian and actor Chris Rock gave Rodney his voice.

The South Park character Craig Tucker owns a guinea pig as a pet. The guinea pig’s name is Stripe.

The movie G-Force has a group of super-intelligent guinea pigs as its main characters.

Did you know that guinea pigs are the main characters of the 2009 film G-Force? In the film, they are specially-trained and equipped anti-terrorism agents for the FBI.

On average, guinea pig litters number between 1 to 6 pups. And the bigger the litter, the higher the risk of stillbirth becomes. But according to the Guinness’ Book of World Records, the largest litter of guinea pigs had 17 pups.

A pregnant guinea pig will take around two months to give birth.

A guinea pig’s pregnancy lasts between 59 to 72 days. The long pregnancy and the large size of pups make pregnant females look like eggplants.

Guinea pigs have been to space before.

The first guinea pigs in space went to space on Korabl-Sputnik 4 in 1961. Launched by the Soviet Union, mice, frogs, and a dog went with them to space. They returned to the Earth in that same year.

Guinea pigs can either live in large cages, or in large rooms dedicated to them.

You could once buy cages for guinea pigs with either solid or wire mesh floors. Wire mesh floors are now discouraged, though. This happened after experts found they irritated guinea pigs’ feet.

Your guinea pigs need Vitamin C like you do.

Guinea pigs have been the staple meat in South America for thousands of years. They are also eaten in other parts of the world since the Spanish conquest. A single guinea pig is enough to fill a single person.

Bulbs are poisonous to guinea pigs.

One of the important guinea pig facts is that bulbs and plants that grow from them are poisonous to guinea pigs. Some examples of bulbs include tulips and onions. Eating them will cause illness or even death for the guinea pig.

Keeping a lone guinea pig as a pet is illegal in Switzerland.

Another one of the important guinea pig facts is that guinea pigs are social creatures and thrive in groups. This is why in Switzerland, it is illegal to have only one guinea pig as a pet.

Guinea pigs jump when they are happy.

Your guinea pig may hop into the air if it gets very happy and excited. Experts call that ‘popcorning’.

Guinea pigs bite to establish dominance over each other.

Rabbits and guinea pigs can live together as pets of the same family.

Rabbits and guinea pigs do not compete with or grow hostile to each other. But, their dietary needs are different. Guinea pigs get malnourished if they are fed the same food as rabbits. Cross-species infections are also a danger that the owner should take note of.

It is important to remember that larger animals and predatory birds may see guinea pigs as prey. These include other pets like cats and dogs, or even common birds like owls. You will need to supervise when in their presence or outdoors to avoid accidents.

Guinea pigs do not usually run away.

Here’s a comforting nugget among guinea pig facts: guinea pigs are timid animals. Even when their cage or room is open, they are unlikely to leave. They will only explore when in familiar territory, or to greet someone familiar like their owner.