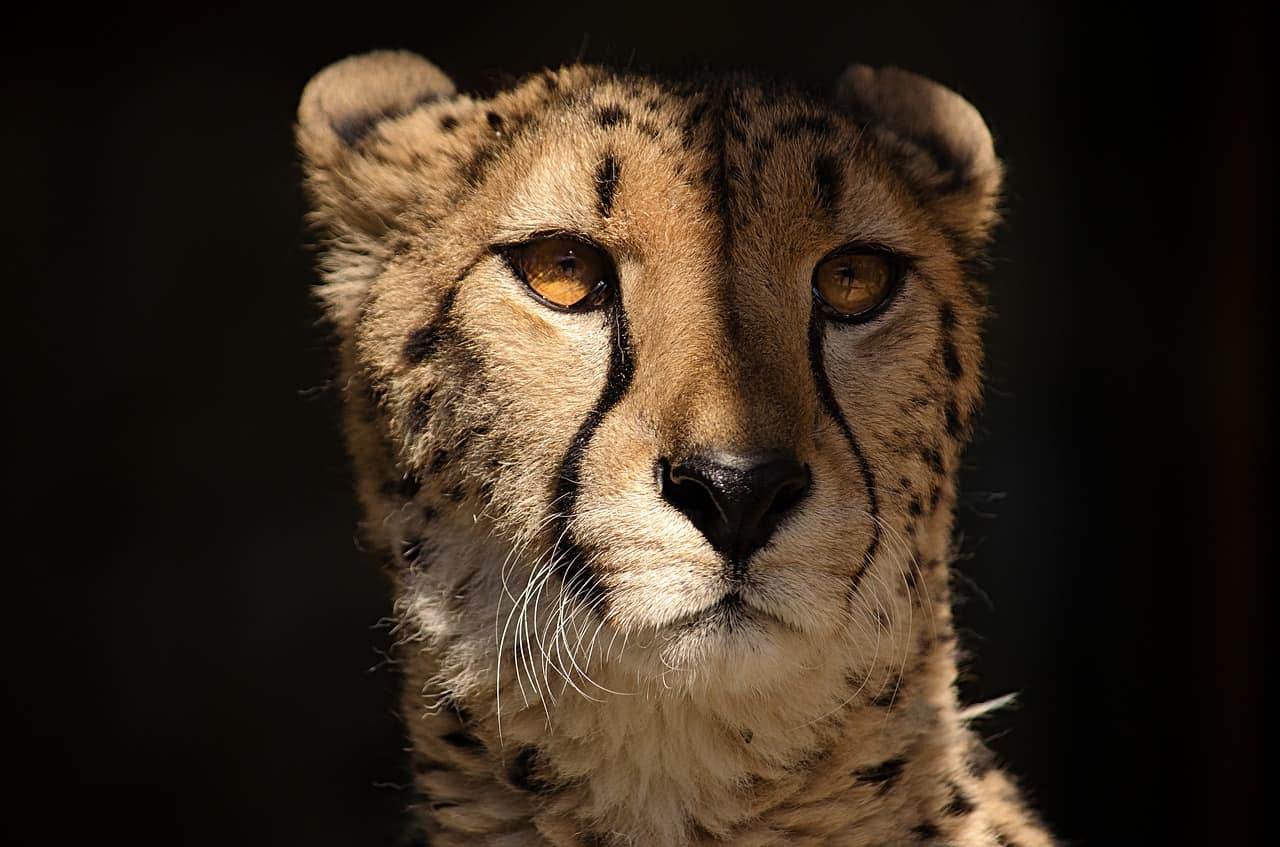 When it comes to speed in the animal kingdom, the cheetah might be the first thing you’d think of. You wouldn’t be wrong, since cheetahs can run at speeds faster than the average modern car. What they lack in size and strength, cheetahs make up for by being the world’s fastest land animals. However, there’s more to these big cats than their extreme agility. Though you may never outrun one in real life, catch up with these cheetah facts and discover the secrets to these unique creatures.

Quick Facts
Essential Facts
Interesting Facts
Table of Contents
01 Cheetah spots serve as their primary form of camouflage.
02 Cheetahs feed strictly on meat.
03 Female cheetahs tend to be solitary animals.
04 King cheetahs have stripes.
05 Cheetah sounds can be heard from 2 kilometers away.
06 Cheetahs commonly have three to five cubs.
07 Baby cheetahs have a lot of predators.
08 Cheetah cubs start eating meat as early as 3 weeks old.
09 Cheetahs can start hunting alone as early as 8 months.
10 Cheetahs may start to become independent in less than two years.
11 Cheetahs in captivity can double their expected lifespan.
12 The cheetah hunting strategy relies mainly on stalking.
13 Cheetahs have excellent eyesight.
14 Cheetahs have built-in "sunglasses".
15 They don't have an impressive night vision.
16 Cheetahs used to live mostly in North Africa.
17 The Asiatic cheetah is critically endangered.
18 People used to tame Asiatic cheetah for hunting wild antelopes.
19 Some countries allow their people to own a cheetah.
20 Cheetahs are the easiest exotic cat species to train.
21 The IUCN classifies cheetahs as a vulnerable species.
22 Human settlements are currently the biggest threat to cheetahs.
23 You can distinguish a cheetah from a leopard through its black spots.
24 Cheetahs don't roar.
25 Cheetahs can survive for 10 days without water.
26 They need at least 2.8 kilos of meat daily.
27 They sleep 12 hours a day.
28 Cheetahs can't climb trees.
29 For cheetahs, running is the best defense.
30 Cheetahs use their tails to steer while running.

Cheetah spots serve as their primary form of camouflage.

Aside from its speed, the cheetah’s most distinguishing feature is its spotted fur. These spots help them blend in with the shadows and foliage of their habitats, which is especially important for stalking their prey.

Cheetahs have a fixed number of spots from the moment they’re born, which also protects the newborns from predators.

The cheetah diet consists of medium to small-sized prey such as gazelles, impalas, wildebeest calves, and hares. Male cheetahs normally hunt together in groups called coalitions.

In contrast to their male counterparts, female cheetah’s aren’t the most social animals. They would usually wander off by themselves, hunting and looking for new places to stay in. Contrary to popular belief, most big cats don’t make dens. Instead, they lounge under trees or hide within tall grasses and bushes.

You may think of stripes as a tiger’s brand, but there is one rare cheetah variety known to have stripes. Native to South Africa, this cheetah is known for its thicker coat that features three stripes along with its trademark spots.

This unique coloration results from a rare genetic mutation, which merges some of their spots into stripes. When it was first encountered in 1926, locals referred to the king cheetah as nsuifisi, believing that it was a cross between a hyena and a cheetah. Today, an estimated 30 king cheetahs roam the wild. How’s that for cool cheetah facts?

Cheetah sounds can be heard from 2 kilometers away.

Cheetahs mainly communicate in growls or chirps. Like their smaller relatives, purrs usually indicate contentment. Meanwhile, cheetahs display aggression  or aggravation through moaning, growling, and making spitting noises. Additionally, cheetahs have a distinct yelp that can be heard by the human ear as far as 2 kilometers away.

Female cheetahs typically give birth to litters of three to five cubs. In total, the female’s gestation period takes around 3 months. Like other species, female cheetahs raise their young alone.

Baby cheetahs have a lot of predators.

Hyenas, leopards, eagles, and lions pose the biggest threats for these helpless cubs. Cubs born in the wild weigh between 150 to 300 grams, while cubs in captivity may reach up to 500 grams in weight.

Although cubs nurse on their mother for about three months, they may start to eat meat once they are 3 weeks old. However, cheetahs only start hunting once they reach 6 months of age.

Cheetahs can start hunting alone as early as 8 months.

Cheetahs start hunting with their mothers at 6 months, but it takes around two to three more months before they can hunt on their own. Within this period, they start lose all milk teeth in place of a stronger set of teeth.

Cheetahs may start to become independent in less than two years.

As early as 15 to 24 months, young adults may leave their mother. However, there are still cases where cheetahs would stay for a few more months. Young females tend to leave their siblings once they reach sexual maturity at 20 to 24 months.

Cheetahs in captivity can double their expected lifespan.

Like most animals, cheetahs have a longer lifespan in captivity. Compared to a maximum of 12 years in the wild, cheetahs in captivity can live from 17 to 20 years.

To further complement their hunting strategy, cheetahs evolved with eyesight capable of seeing up to 5 kilometers in detail. Compared to the human range of 20 feet with normal eyesight, cheetahs have far greater sight.

Much like the Cheetos mascot, Cheetahs have natural sunglasses that protect their eyes. This comes in the form of two black lines running from their eyes to their mouth. The cheetah’s tear line helps reflect the sun’s glare as cheetahs hunt in the arid savannas of their habitats. How’s that for amazing cheetah facts?

They don't have an impressive night vision.

Although cheetahs have great vision during the day, they don’t have specialized night vision like most cats. In terms of structure, cheetahs have more cones in their eyes and fewer rods, which explains this disadvantage. This is also one of the reasons why cheetahs are more active during the day.

Historically, cheetahs lived across Africa, with a greater population concentrated in northern Africa. Nevertheless, most of wild cheetah today live in sub-Saharan Africa along with fewer numbers in Northern Africa and Iran.

The Asiatic cheetah is critically endangered.

The Asiatic cheetah diverged in Africa between 30,000 to 65,000 years ago. Throughout the British colonization of India, the Asiatic cheetah was called the “hunting leopard.” True to its namesake, people would train these cheetahs to join them in hunting wild antelopes. How’s that for surprising cheetah facts?

Some countries allow their people to own a cheetah.

In the past and even up today, humans have kept cheetahs as pets and as symbols of wealth. Although the United States prohibits keeping cheetahs as pets, the United Arab Emirates, some parts of Africa, and a few Western Asian countries allow the domestication of cheetahs.

Cheetahs are the easiest exotic cat species to train.

Compared to most exotic cat species, cheetahs are undoubtedly the easiest to train, although they don’t breed well in captivity.

The IUCN classifies cheetahs as a vulnerable species.

Although in general, cheetahs are not listed as endangered species, their population continues to decrease. Moreover, scientists even suggest that they should be uplisted to “endangered,” with only less than 7,000 individuals left in the wild. Definitely one of the more concerning cheetah facts.

Human settlements are currently the biggest threat to cheetahs.

Traditionally, cheetahs have been hunted by humans for their fur, although the biggest threats to their survival today are loss of habitat and resources. Since they don’t inhabit dens, cheetahs need huge land areas for survival. Today, industrialization and agribusiness threatens the loss of the expanse of foliage that they inhabit.

You can distinguish a cheetah from a leopard through its black spots.

At first glance, it may seem hard to differentiate cheetahs from leopards. However, the general rule of thumb is to observe their markings for subtle differences. Compared to a leopard, cheetahs have clear individual black spots all over their body.

Meanwhile, leopards have a small uneven group of spots that form rose-like marks. Aside from the different markings, cheetahs also have a distinct line on their face resembling a “long, black tear.”

Unlike tigers and lions, cheetahs don’t roar. Instead of roaring, they create a series of chirps and yelps.

Cheetahs can survive for 10 days without water.

Unlike humans, cheetahs don’t need to drink too much water. They only need to drink once every three to four days, although there could be times where they’d drink more often. Cheetahs can survive up to ten days without water, relying only on their prey’s body fluid. Definitely one of the cooler cheetah facts.

They need at least 2.8 kilos of meat daily.

Lone adult cheetahs usually hunt every two to five days, while a female with cubs may need to hunt daily. On average, an adult cheetah needs about 2.8 kilograms of meat per day.

Cheetahs use most of their time sleeping around 12 hours per day. During the hottest points of the day, they usually prefer to stay in shady areas, napping under the trees.

Although the cheetah belongs to the cat family, they cannot climb trees. Cheetahs have non-retractable claws, which keeps them from folding their claws to scale trees. However, it’s also this weakness that helps them run at incredible speeds.

For cheetahs, running is the best defense.

Compared to other big cats, cheetahs have a much smaller frame as well as shorter claws. To compensate, cheetahs’ extraordinary speeds act as their primary defense. When they encounter bigger threats in the wild, it will choose to give up its prey to escape rather than fighting.

Cheetahs use their tails to steer while running.

Much like a boat rudder, cheetahs use their tails to manipulate the trajectory of their run. It also supports and balances the cheetah’s weight. When chasing prey, cheetahs wave their tails back and forth to follow the movement of its prey.

This helps them maneuver swiftly during sharp turns even at high speeds. Definitely one of many cheetah facts that show how special their body structure is.