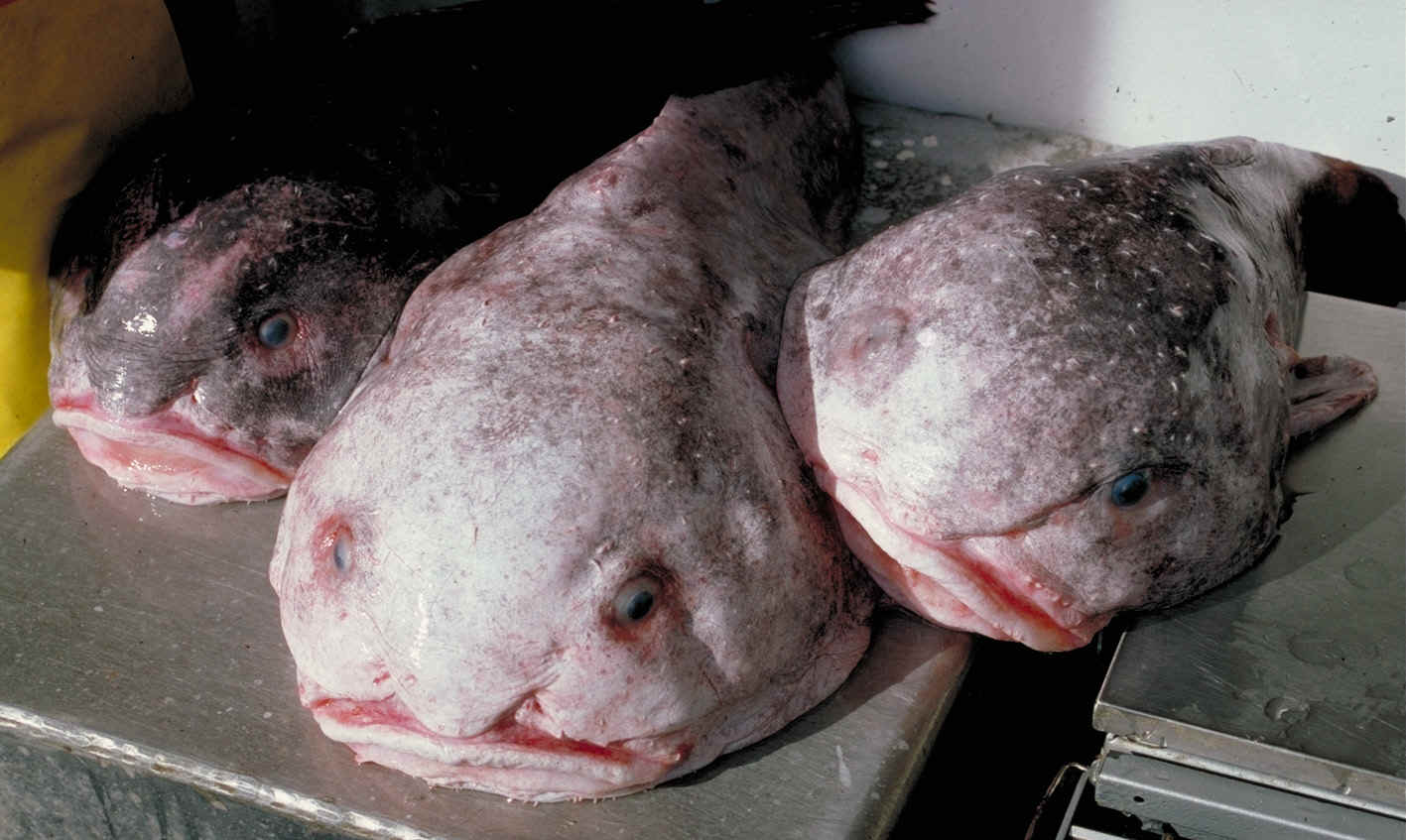 Blobfish Is a Real Name

Let’s start out our list of blobfish facts by saying that this is the correct term for this unique marine creature. Many might think that it is nickname or a more commonly used name, but blobfish is actually this animal’s real label.

As we learn more about this fish, the reason that it has this fun name will become much more evident. Of course, all animals have a scientific name. The blobfish is known in scientific circles as Psychrolutes marcidus and is a part of the Animalia kingdom.

A Blobfish Doesn’t Have a Skeleton or Muscles

It’s not one of the more surprising blobfish facts, but these animals have this name because they look just like what you would expect when they are taken out of the water – a blob.

The blobfish does not have a full skeleton, but instead only a version of a backbone. It doesn’t have any real muscles either, and is instead made up of a substance that would remind you of jelly. These unusual physical characteristics are necessary in order for the blobfish to survive in its habitat.

It may surprise you to learn that the blobfish doesn’t necessarily look like a blob in its natural habitat, though. These creatures live in very deep waters and their bodies are under immense pressure.

This pressure can be anywhere from 60 to 120 times greater than the pressure at sea level. Under this type of pressure, the blobfish actually resembles a more normal looking fish. There are no pictures of a blobfish in its natural habitat, but many drawings and computer generated visions of the fish have been developed.

A Blobfish Isn’t Dangerous to Humans

This fish looks like a creature straight out of a science fiction movie. It certainly looks like it doesn’t belong on this planet. Even though coming into contact with a blobfish is virtually impossible, you wouldn’t have to worry about it if you did.

They don’t have any teeth and are not known as a vicious animal by any means. Even if you are on the list of foods that a blobfish enjoys, they certainly won’t hunt you down or chase you.

According to blobfish facts, no one has ever actually witnessed a blobfish eating. But, based on what we do know about this animal, the blobfish is not able to hunt and therefore waits patiently for food to come towards it.

It opens its mouth and just sucks in whatever food source might swim past it. While we don’t know for sure, it is assumed that a blobfish feeds on sea pens, shellfish, sea urchins and crabs. If a source of food wasn’t readily available, a blobfish would most likely starve to death.

You Can’t Order Blobfish in a Restaurant

Blobfish do not have any known predators in their natural habitat but humans are their biggest threat. The blobfish is often caught in trawling nets by fisherman. But, because the fish can’t handle the changes in pressure as it reaches the water’s surface, it instantly changes shape and dies.

This leaves it inedible, and, the harsh truth is that the makeup of the fish makes it taste bland and it is therefore not a desirable fish for consumption. Some fisherman will try to release the fish before it dies, but it is unknown whether or not the fish can adjust as it is thrown back into the water.

Blobfish Reproduction Is a Mystery to Scientists

There is so much that is as yet unknown about the blobfish, and blobfish facts will tell you that reproduction is one of the mysteries surrounding this creature. We do know that the female blobfish can lay thousands of pink eggs on the ocean floor.

Either the female or male will then guard the eggs. Because the blobfish lives in an area with no plants or caves, someone must watch and guard the eggs at all times. The mating process and the early days of a young blobfish are still a mystery to us however.

One of the more concerning blobfish facts is that these fish are considered to be endangered. There is so little known about the animal and the sad fact is that we may never get the chance to learn everything we want to.

It is assumed that these fish are becoming scarce because they get caught in nets so often. Blobfish also don’t swim or move locations so if the habitat has changed around them and left them with little food, the creature can starve to death. It is unknown how much food this animal needs on a daily basis though.

No One Has Documented a Living Blobfish

The blobfish lives in harsh conditions that humans can’t survive in, not even for the short moment it takes to view this creature. Blobfish live in deep cold water at depths of close to 4,000 feet.

We may find it strange that the fish completely changes shape when it reaches the surface but the truth is that if humans were to travel to the depths that the blobfish resides at, the human body would probably resemble what the blobfish does at sea level.

Just as we need the right pressure for our bodies to function, so does the blobfish.

You Can’t Have a Blobfish as a Pet

You might be intrigued by these animals and maybe you have wondered if there is any way to create the correct environment in a home setting so that you could have your own pet blobfish in your living room.

While professional aquariums are constantly built to certain specifications, based on the type of fish that will live in them, it is not possible to recreate this in a standard home. There is also the problem of transporting the fish from its deep water home and keeping it safe until it is placed in an aquarium.

The Blobfish Is the World’s Ugliest Animal

Blobfish facts tell us that this animal was voted the world’s ugliest animal in 2013. It beat out several other animals, including the naked mole rat, the axolotl, the purple frog and the proboscis monkey.

The blobfish is the mascot for the Ugly Animal Preservation Society, which lists its mission as being dedicated “to raising the profile of some of Mother Nature’s more aesthetically challenged children.” This maybe not so coveted title has made the blobfish better-known by the general public.

The Blobfish Is a Movie Star

The blobfish has made its way into pop culture recently. Michael Hearst, a musician and author, wrote a composition titled “Blobfish” that was featured on his 2012 album Songs For Unusual Creatures.

The blobfish was also featured in the movie Men in Black 3. A prop version of the fish was seen sitting on the work surface of a Chinese restaurant next to a few other creatures with which also resembled aliens. This was a very fitting place for the fish, as many think that it looks like it came from another universe.

Even though you won’t be able to see a blobfish yourself, there are many countries you can visit to at least be close to the animal. It is found in the deep cold water off the coasts of mainland Australia and Tasmania.

You can also travel to New Zealand to be near the waters that the blobfish makes its home. The blobfish might also be located in other areas of the ocean, but, for now, these are the only areas that we know for certain the fish calls home.

Here’s one of the more hotly anticipated blobfish facts: a cafe dedicated to the fish will open in London in 2016. The owners of the cafe have promised that diners will be able to view three blobfish.

They have been named Barry, Lorcan and Lady Swift. The cafe has yet to say how they will build an aquarium that will provide the fish with the water conditions that they need to survive or how they will transport the fish, but they have hinted that they already have the fish ready to go.

The Lifespan of a Blobfish Is Unknown

Yet another of our fascinating blobfish facts leaves us with something of a mystery. We know very little about how blobfish reproduce. We don’t know much about their eating habits or their sleep schedules.

We also don’t know very much about their lifespan. Some fish can live for decades and this could be the case for the blobfish – but scientists aren’t sure. What we do know is that many of these fish come to an early end when they are trapped in nets by fisherman.

A Blobfish Can Be Furry!

After the blobfish was officially named the World’s Ugliest Animal, an adorable stuffed blobfish popped up on the market, courtesy of Hashtag Collectibles.

It was an oversized version of the fish that was soft pink with a large nose and hot pink lips that mimicked the frown that the blobfish seems to make. There were two sizes available and both sold out quickly, which is a great thing because 10% of all profits were donated to the Sea Shepherd Conservation Society.

According to blobfish facts, these sea creatures are missing a key component that most fish have. A fish usually has what is known as a gas bladder, which is used for maintaining buoyancy in the water. This allows a fish to swim freely.

But, because a blobfish is mainly a mass of tissue, a gas bladder would not do it any good. Instead, the blobfish has a density that is slightly less than water, which allows it to float in place without having to waste energy on swimming. 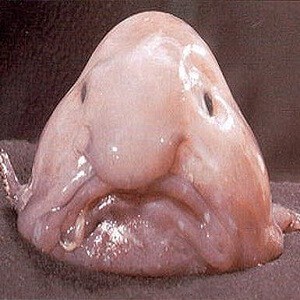 Blobfish facts will tell you all about these amazing sea creatures but will also point out how many mysteries surround this fish. Learn why their name is such a great fit and how these animals eat and survive in such deep waters.

Discover why you have never seen a blobfish before. You will also be informed of a new attraction that will finally make these fish more well-known. Finally, you will learn about the conservation status of this animal and what is being done to keep the blobfish around for years to come.