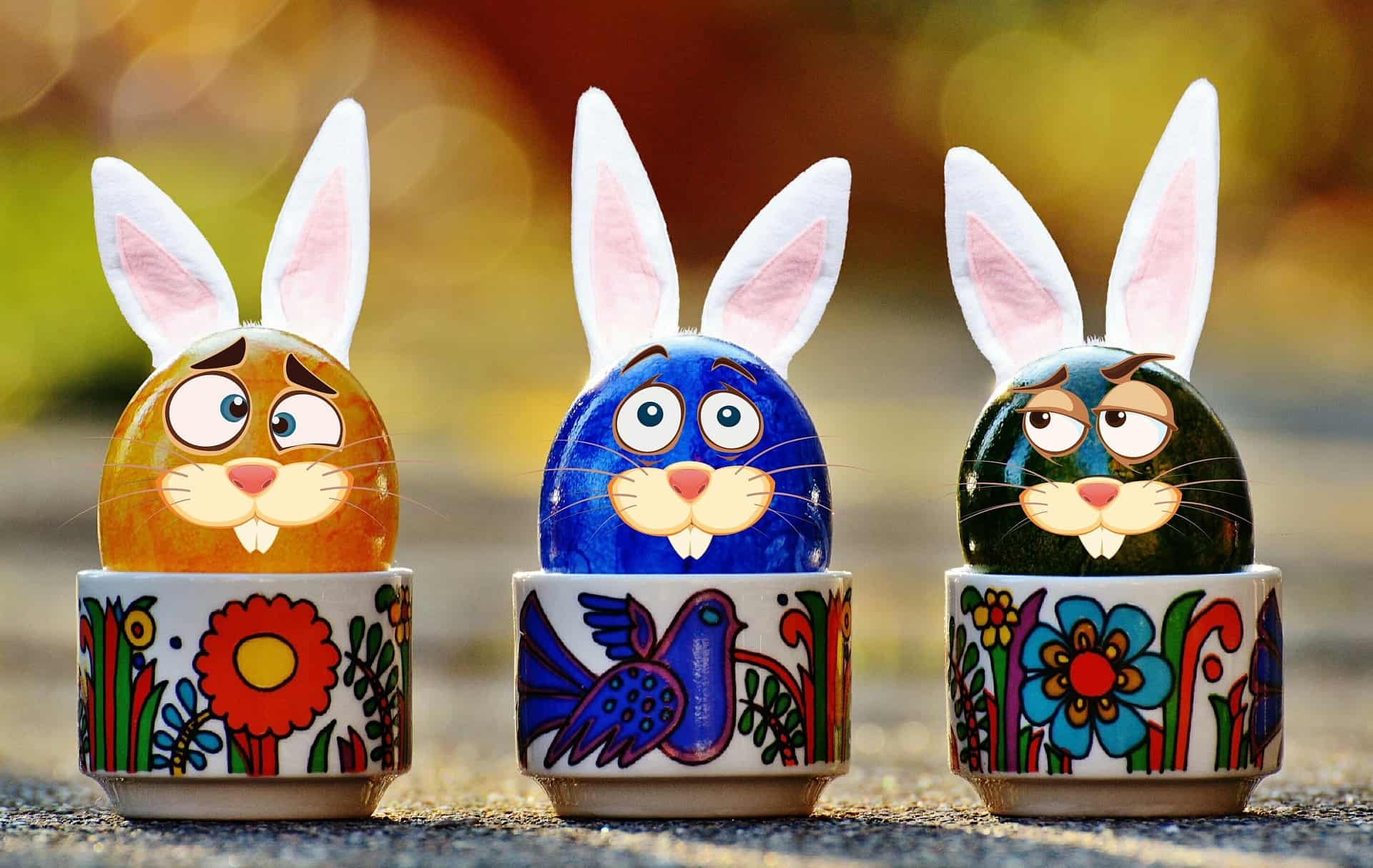 Table of Contents
01 Easter Is Celebrated by 80% of the U.S. Population
02 Easter Is on a Different Date Each Year
03 Easter Is the Celebration of Jesus’ Resurrection for Christians
04 Easter Traditions Resemble an Ancient Pagan Celebration
05 The White House Hosts an Easter Egg Roll Every Year
06 Ham Is the Traditional American Easter Dinner
07 The Easter Bunny Began as a Legend
08 Easter Baskets Are Not Random
09 Eggs Were Thrown During Medieval Times
10 Easter Eggs Are Not a Modern Tradition
11 Easter Is Just One Day out of a Period of Important Religious Days
12 Easter Candy Is Made Year Round
13 Easter Facts – Facts about Easter Summary
Quick Facts
Essential Facts
Interesting Facts 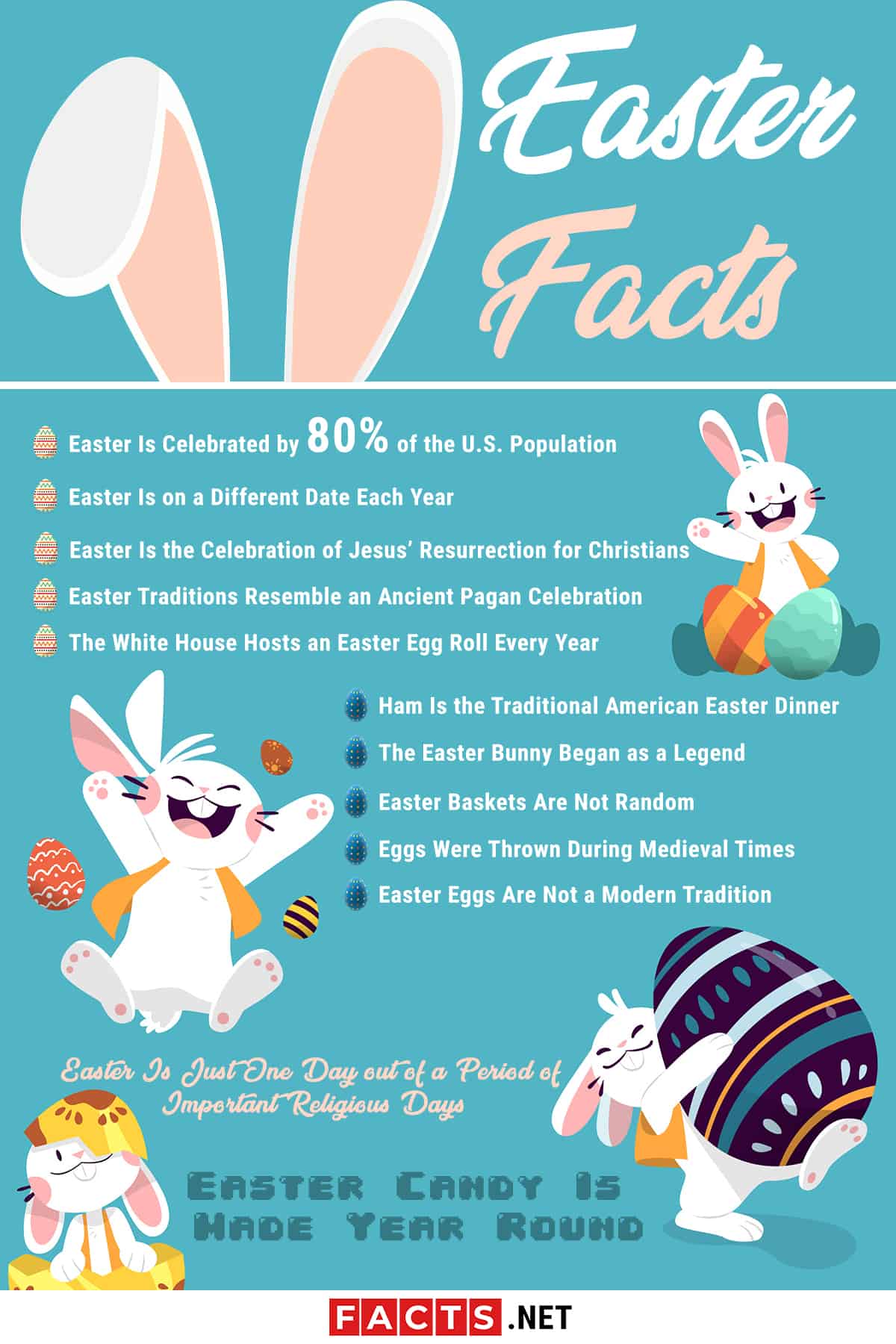 Easter Is Celebrated by 80% of the U.S. Population

Easter facts show that it is one of the most widely celebrated holidays. It also has a large financial impact, with the average person spending $140 on candy, clothing, gifts and other items. Most of this goes into Easter baskets, which are made by 87% of people celebrating the holiday.

Easter Is on a Different Date Each Year

Easter is celebrated on the first Sunday after the first full moon that occurs on or after the vernal equinox, or the first day of astronomical spring. If the full moon falls on a Sunday, Easter is delayed for one week. The date of Easter affects several other Christian holidays, including Palm Sunday, Good Friday, Ascension Day and Pentecost.

Easter Is the Celebration of Jesus’ Resurrection for Christians

Easter is celebrated by Christians throughout the world in remembrance of the day that Jesus rose from the dead, three days after being crucified on the cross. The day symbolizes for Christians that they have a new beginning through Christ, and that their sins have been forgiven. It also marks the end of Lent, a month-long event of fasting and repentance.

Easter facts show that the holiday closely resembles a pagan celebration from ancient times. Nimrod, the grandson of Noah, had become a tyrannical ruler. When he died, a religion formed that practiced demon worship and performed human sacrifices. When his widowed wife gave birth to a son, she convinced the public that the son was Nimrod reborn and that he was the promised savior. As the story was passed down over the years, she became known as the Anglo-Saxon goddess Ishtar and, by some, Easter. A fable was also told that explained how Ishtar was hatched from an egg that fell from heaven.

The White House Hosts an Easter Egg Roll Every Year

President Rutherford B. Hayes hosted the first egg roll on the South Lawn of the White House in 1878. It has become an annual tradition for families and children, and only changed location during World War I and World War II. During the wars, the event was held at the National Zoo and a few other locations.

During a holiday that focuses on eggs and rabbits, one might wonder why ham is the usual dinner selection. In the days before the invention of the refrigerator, hogs were slaughtered during the fall months. The meat was then cured for at least six months, and was usually ready just in time for the Easter holiday meal.

The Easter Bunny Began as a Legend

Rabbits are viewed as a symbol of new life by many cultures. The Easter Bunny began as a legend from Germany that spoke of a woman who would leave decorated eggs hidden throughout the village for children to find during times of famine. Once they found the eggs, they would look up to see a large bunny hopping away from the scene.

Easter Baskets Are Not Random

On Easter morning, children tend to race to see whether the Easter Bunny left them an Easter basket. For most celebrations involving gifts, the gifts are wrapped in boxes and with wrapping paper. The Easter basket is left open because the basket is supposed to symbolize a bird’s nest, where eggs are kept safe.

Eggs Were Thrown During Medieval Times

During Medieval church services, the priest would toss a hard-boiled egg to one of the church choirboys sometime before noon. The choirboy would toss it to someone else, and so on. The egg would be tossed as many times as possible, and whoever had the egg when the clock struck 12 in the afternoon was the winner. They would also get to keep the egg.

Easter Eggs Are Not a Modern Tradition

Throughout history, and in many cultures, eggs have been a popular gift. The tradition can be found in ancient Egyptian, Persian, Greek and Roman cultures. The egg symbolizes life, which is very fitting for Easter. Eggs are also tied to Easter because of the legend of Ishtar, who hatched from an egg in the Euphrates River. During Lent, the consumption of animal products, including eggs, was not allowed. This led to a surplus of eggs by the time Easter came, and is another reason why eggs were embraced for the holiday.

Easter can be considered a season in the Christian Church. It begins with Shrove Tuesday, also called Fat Tuesday, or Mardi Gras, which is a final feast and celebration before Lent. Lent lasts for 40 days, which symbolizes the same amount of time that Jesus spent alone in the desert. Participants fast during this period, and repent for their sins.

The week before Easter is called Holy Week and consists of Maundy Thursday, which recognizes Jesus’ last supper with his disciples and Good Friday, the day on which Jesus was crucified. Holy Saturday is a celebration of the transition between death and life. Easter Sunday follows, and then the 50 days after are called Eastertide and celebrates Jesus’ ascension into heaven.

Easter Candy Is Made Year Round

The demand for Easter candy is so great that it must be made throughout the year to meet the public’s needs. Easter is the second biggest holiday when it comes to candy, after Halloween. Chocolate eggs were first made in Germany in the early 1800s and are still hugely popular today. Chocolate bunnies are also popular. Some 90 million edible bunnies are made each year. Candy that isn’t chocolate is also popular for the holiday. Around 700 million Peeps are made each year, along with 16 billion jelly beans. 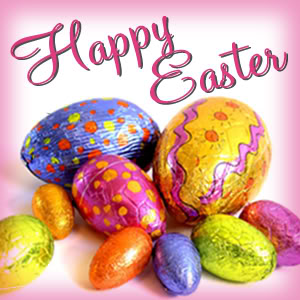 Easter facts show the history of the Christian holiday and also focus on the modern commercialized practices. Easter and similar events have been part of history for centuries, and today’s holiday is a melting pot of legends and traditions. As one of the most popular celebrated holidays, there is plenty to learn about Easter.