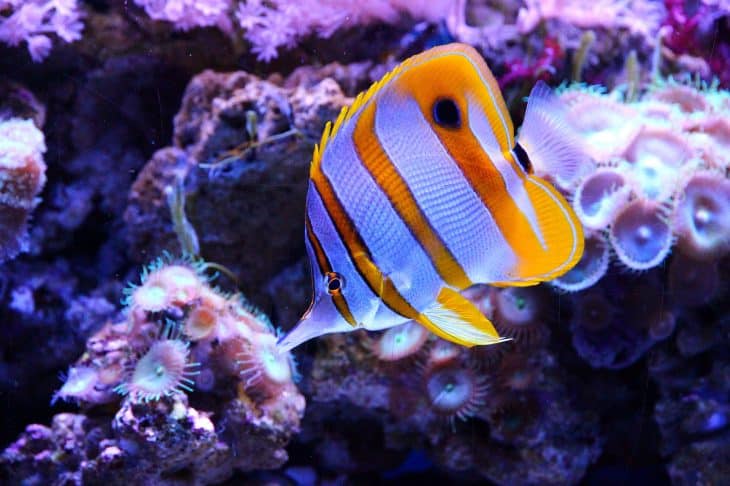 The butterflyfish has been traded by people for aquarium displays. Its body shape and distinctive color patterns have been an eye-catcher in a controlled environment together with other ornamental fishes. In its natural habitat, the butterflyfish is highly territorial and monogamous, meaning it only goes singly or in pairs, inhabiting shallow waters around coral reefs.

As adults, they are white with strong black vertical stripes and yellow highlights on their fins, while juveniles are distinctly darker colors and have an eyespot on their dorsal fins to confuse predators. Truly, butterflyfish are unique in terms of a lot of things compared to other fishes, and if you want to know more about them, then here are some facts that would surely satisfy your growing interest in them.

Table of Contents
01They are busybodies in the morning.
02There are more than 100 different species of butterflyfish in oceans around the world.
03They are famous for aquarium displays.
04Butterflyfishes have large fake eyes.
05People look at their abdomens and forewings to identify their gender.
06Some of them were almost goners.
07They have fins that resemble butterfly wings.
08Butterflyfishes have a variety of food selections.
09The butterflyfish is one of the most common types of coral reef fish in the world.
10The IUCN Red List has classified most of its species as least concerned.
11The butterflyfish mates at a very specific time of the year.
12Once fertilized, the eggs hatch in a mere 28 to 30 hours later.
13The Tear Drop Butterflyfish is a beautiful fish originating from the reefs of the Indo Pacific.
14You can set them up in an aquarium.
15They need to have the appropriate tankmates.
16An Iron Butterflyfish is expensive.
17The freshwater butterflyfish is a specialized surface hunter.
18Their youngs have armor.
19Released eggs become part of the plankton.
20Butterflyfish have different names in several countries.

They are busybodies in the morning.

A lot of animals are classified as being diurnal, meaning active during day time, and would have an inactive period of rest during the nighttime. Butterflyfish are one of those animals. They stay active to feed during the day and hide in the corals during the night.

There are more than 100 different species of butterflyfish in oceans around the world.

Butterflyfishes belong to a large family of over 100 species. Their markings, patterns, and fin shape would vary greatly between species, but their overall body shape, coloration, and behavior are usually similar across the family.

They are famous for aquarium displays.

Traded primarily as aquarium ornamentals, butterflyfishes have been essential in some grand aquarium displays all over the world. People would prefer seeing them swimming around, displaying their body coloration and pattern. Their diet may make them somewhat of a problem to maintain, but the juveniles seem to thrive better in captivity than the adults.

The butterflyfish has a large spot that looks like an eye on the tail end of its body. Their real eye is often much smaller or camouflaged within other body markings. This is to trick a predator into thinking the fish will move in the direction of the false eye, thereby giving the smaller fish a chance to escape capture.

People look at their abdomens and forewings to identify their gender.

Some of them were almost goners.

They have fins that resemble butterfly wings.

The African Butterfly Fish is a freshwater species that has been around for quite some time. While many fish can break the surface of the water if they want to, this species can actually glide. Their pectoral fins that resemble butterfly wings have made it possible for them to glide.

Butterflyfishes have a variety of food selections.

The Butterflyfish can eat a variety of food may it be zooplankton to tiny motile crustaceans and mollusks, soft and stony corals, anemones, tubeworms, and other soft and encrusting sessile invertebrates associated with live rock. They can also be opportunistic marine fish flesh-eaters.

The butterflyfish is one of the most common types of coral reef fish in the world.

Butterflyfishes have well adapted to life in narrow spaces of the vast coral reef systems, however few of their relatives also live in seagrass beds, lagoons, and mudflats. Only four species occur in the Eastern Pacific and 13 in the Atlantic Ocean. Their preferred habitat is shallow warm waters less than 65 ft deep near shores or estuaries, but a few species do reside in deep water habitats up to 650 ft.

The IUCN Red List has classified most of its species as least concerned.

While it is rather settling to know that this fish is not on the endangered list anymore, the effects of climate change still pose the greatest threat to its species. Make no mistake, though, the population of butterflyfish is in excellent health and requires no specific conservation efforts to survive.

The butterflyfish mates at a very specific time of the year.

Once fertilized, the eggs hatch in a mere 28 to 30 hours later.

Parents likely play almost no role in raising and caring for their young, but to protect themselves, the butterflyfish has a unique larval stage in which it develops a plate of bony armor over the head. This plate eventually extends outwards along the back to form spines.

The Tear Drop Butterflyfish is a beautiful fish originating from the reefs of the Indo Pacific.

Suited for a larger fish-only aquarium, these fishes have a white base becoming yellow dorsally, median fins with large black eyespot on its upper side, and a black bar through the eyes. They also have a black vertical stripe which is present at the posterior end.

You can set them up in an aquarium.

If you plan to add a butterflyfish in your aquarium, then you should have a large tank of at least 70 gallons or perhaps as much as 150 gallons with plenty of reefs and other small hiding places. Butterflyfish can be fed on a standard diet of tropical fish food and flakes with a mixture of plants and meat.

They need to have the appropriate tankmates.

Tankmates can include gobies, parrotfish, and clownfish, but some species may be more territorial than others.  Also, the optimal pH for a Butterfly Fish is between 8.1 and 8.6.

An Iron Butterflyfish is expensive.

A peaceful species, their diet mainly consists of tubeworms and clams. It is expensive and worth $3,500. The Iron Butterflyfish, found only around the Izu Islands in Japan, is reportedly to sell for $3,800.

The freshwater butterflyfish is a specialized surface hunter.

These freshwater fishes are experts in capturing small prey along the water’s surface. They can jump and glide to avoid predation. Their eyes and mouth are well suited for accurately catching unwary prey.

Their youngs have armor.

Since they are very tiny and vulnerable at birth, babies develop armor plates that protect their bodies until they grow and become stronger. These bony plates extend backward from the head.

Actual spawning takes place at dusk, with the female releasing anywhere from 3,000 to 4,000 eggs. The eggs are small, pelagic, and hatch within a day. Most of the eggs released will be eaten by animals that feed on planktons.