Oklahoma is a state rich in cultural diversity. The vast beauty of this great state is often highlighted in many tourism-related Oklahoma facts lists. What makes it so stunning? First of all, due to Oklahoma’s geographic location, it also has a high rate of biodiversity. You’ll see a lot of red maples, sweetgum, ponderosa pine, hickory, and eastern redbud trees here.

Oklahoma is home to amphibians as well, like the gray tree frogs and woodhouse toads. With a length of five inches, it is the state’s largest toad. Reptiles that live here include snapping turtles, copperhead snakes, and American alligators. Plus, some of the most incredible natural attractions in the United States are in Oklahoma. Tourists from all over the world travel millions of miles to see the Wichita Mountains Wildlife Refuge. Over here, visitors can experience up-close with 59,000 acres of free-roaming wildlife. Another tourist attraction is the Great Salt Plains State Park in Jet, Oklahoma. It’s the only place in the world where you can dig for hourglass-shaped selenite crystals.

Oklahoma’s economy is not as well-balanced as that of many other states in the United States. Overdependence on agriculture and petroleum has existed in the past, but state and local officials’ attempts to attract new types of industry have had some success.

Did those Oklahoma facts make you want to learn more about the 46th US state? Then you’re in luck! Read on to know more about its history, people, culture, and so much more!

The state flag of Oklahoma consists of two symbols of peace: the calumet, or the Native American pipe, and the olive branch. The flag also has a buffalo skin shield that symbolizes defensive or protective warfare while the blue field or banner represents devotion. 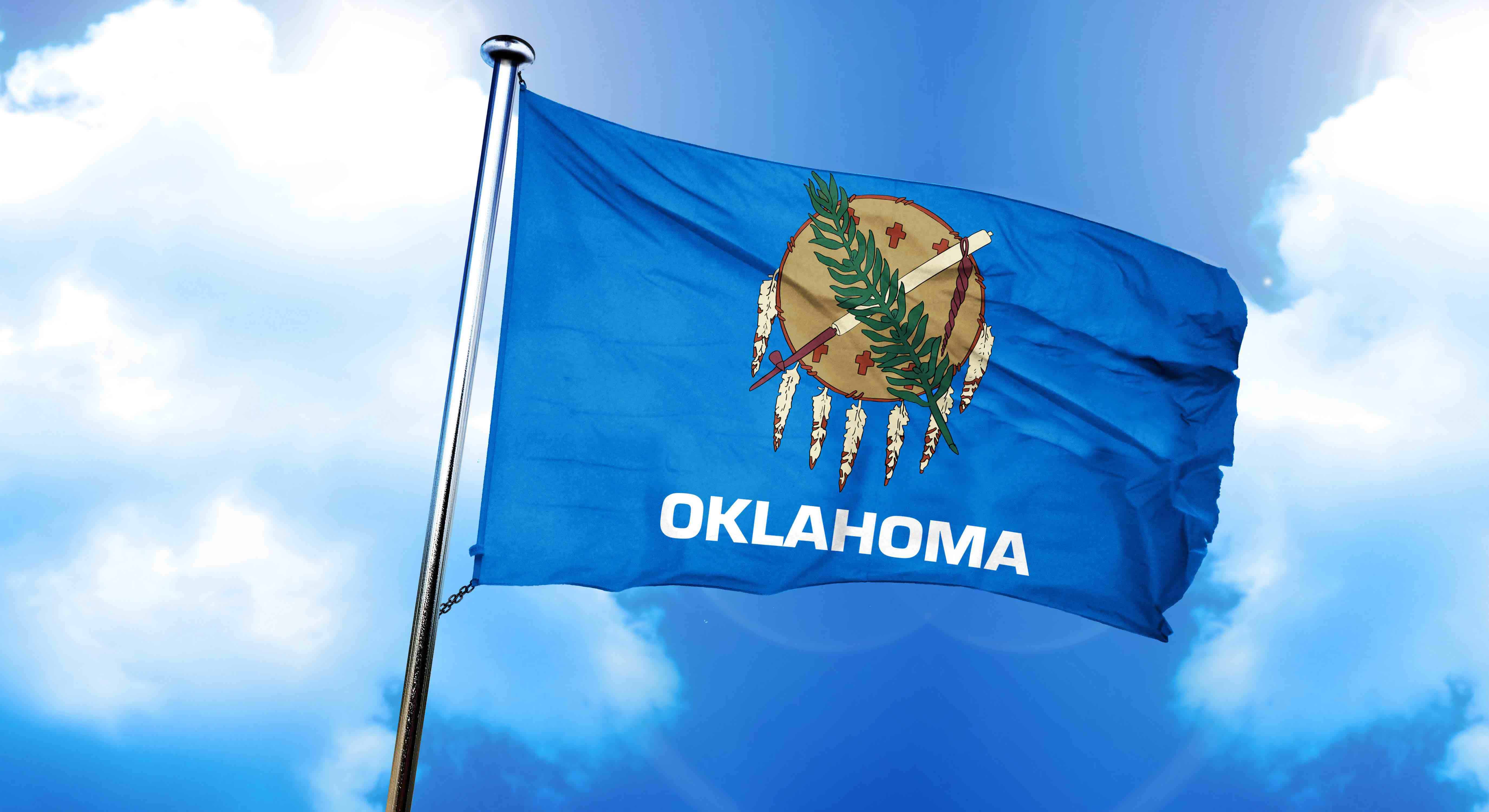 Oklahoma Rose is the state flower of Oklahoma.

Tornadoes are very common in Oklahoma.

Oklahoma is in an area called Tornado Alley, a place in the United States where tornadoes occur very often. This area lies in zones that have various temperatures, strong winds, and a weather pattern that changes drastically in a short time. About 62 tornadoes hit Oklahoma yearly which is one the highest number of tornadoes hitting a country anywhere in the world.

The 1912 tornado was one of the major tornado outbreaks in Oklahoma.

One of the major tornados that hit Oklahoma happened from April 27 to 29, 1912. Around six violent tornadoes hit the state and affected about 16 cities, killed 40 people, and injured 120.

Scissor-tailed flycatcher is the state bird of Oklahoma.

On June 4, 1937, the American businessman and owner of the Humpty Dumpty supermarket chain introduced the first shopping cart. Goldman thought of how his customers could move more groceries. He used a wooden folding chair, attached wheels on the legs, and a basket on the seat.

Guthrie was the first capital of Oklahoma.

Guthrie is popular for its collection of 19th and 2oth commercial structures. It was also the first capital of Oklahoma. Its area measures 19.2 square miles (50 km2), 2.81% of this is water. Guthrie is in the Sandstone Hills part of Oklahoma and is known for oak forests and hills which are approximately 250 to 400 ft (76 to 121 m).

Watermelon is the state vegetable of Oklahoma.

In 2007, Oklahoma designated the watermelon as its state vegetable. Despite several discussions about whether watermelon is a fruit or vegetable, the Oklahoman senator Don Barrington claimed that watermelon is a vegetable since it comes from the gourd and cucumber family.

Golden Driller in Oklahoma is the 6th tallest statue in the US.

The “Golden Driller” is a statue of an oil worker. It is 75 ft tall (900 in) and weighs 43,500 lb (19,731 kg). The statue is made of steel frame, covered with plaster and concrete, and situated in front of Tulsa Expo Center since 1966. The Oklahoma Legislature adopted the Golden Driller as the state monument in 1979.

Oklahoma is home to the world's largest soda pop bottle.

One of the most popular road attractions in Arcadia, Oklahoma is the soda bottle sculpture named “Bubbles.” It stands 66 ft (792 in) and 4 tons (8,000 lbs). Made of yellow steel rings with thousands of LED lights, each night the bottle lights up and features a stunning light show.

"Atomic Annie" can be seen in Fort Sill, Oklahoma.

The “Atomic Annie” was the first and only nuclear cannon. The cannon measures 84 feet (25 meters) long and weighs 85 tons (170,00 lbs). “Atomic Annie” can fire a nuclear weapon with a range of around 20 miles. It can also destroy a large number of enemies in an instant. It has been placed in Fort Still, Oklahoma since 1964.

Oklahoma has a healthy agriculture industry.

Oklahoma is ranked 5th in the production of cattle and wheat in the United States. Furthermore, Oklahoma supplies about 5.5% of American beef and produces 6.1% of American wheat; 4.2% of American pork products, and 2.2% of dairy products.

Oklahoma is home to different amphibians and reptiles.

The state is home to different amphibians like woodhouse toads (the state’s largest toad) and gray tree frogs. Similarly, reptiles like snapping turtles, copperhead snakes, and American alligators also live in Oklahoma. Moreso, Pronghorn antelopes, armadillos, coyotes, and American bison are just a few of the mammals that inhabit the state.

Oklahoma is the 4th largest producer of crude oil in the United States.

As of 2020, Oklahoma is the 4th largest producer of crude oil in the US, producing around 171,753 million barrels of crude oil. In 2019, Oklahoma produced nearly 5% of the country’s crude oil. On top of that, the state has five operable oil refineries manufacturing about 523,000 barrels of oil daily.

Oklahomans celebrate the Red Earth Festival every June. It is a Native American Festival that features gourd dancing (a social dance), nonprofit and educational booths, and a powwow (a social meeting). Red Earth Festival is a multi-day celebration that begins with a parade in Oklahoma City.

Picher is a ghost town in Oklahoma.

Picher is also one of the most toxic towns in the United States. It was once home to thousands of people and a place for mining. When the mining operation stopped in 1967, it left contaminated water from more than 10,000 abandoned mine shafts, 70 million tons of mine tailings, and 36 million tons of mill sand. As a result, its sludge became a massive environmental cleanup challenge.

Cimarron, Oklahoma is the county in the United States that borders four states.

BOK Tower is the tallest building in Oklahoma.

Formerly known as One Williams Center, BOK Tower is a 52-story skyscraper that stands 203 m (667 ft) high, located in Tulsa, Oklahoma. It is the highest tower in any of the five “Plain States”: Oklahoma, North Dakota, Nebraska, South Dakota, and Kansas. Minoru Yamasaki & Associates designed and built BOK Tower in 1976. Yamasaki was also the same architect who outlined World Trade Center in New York City. 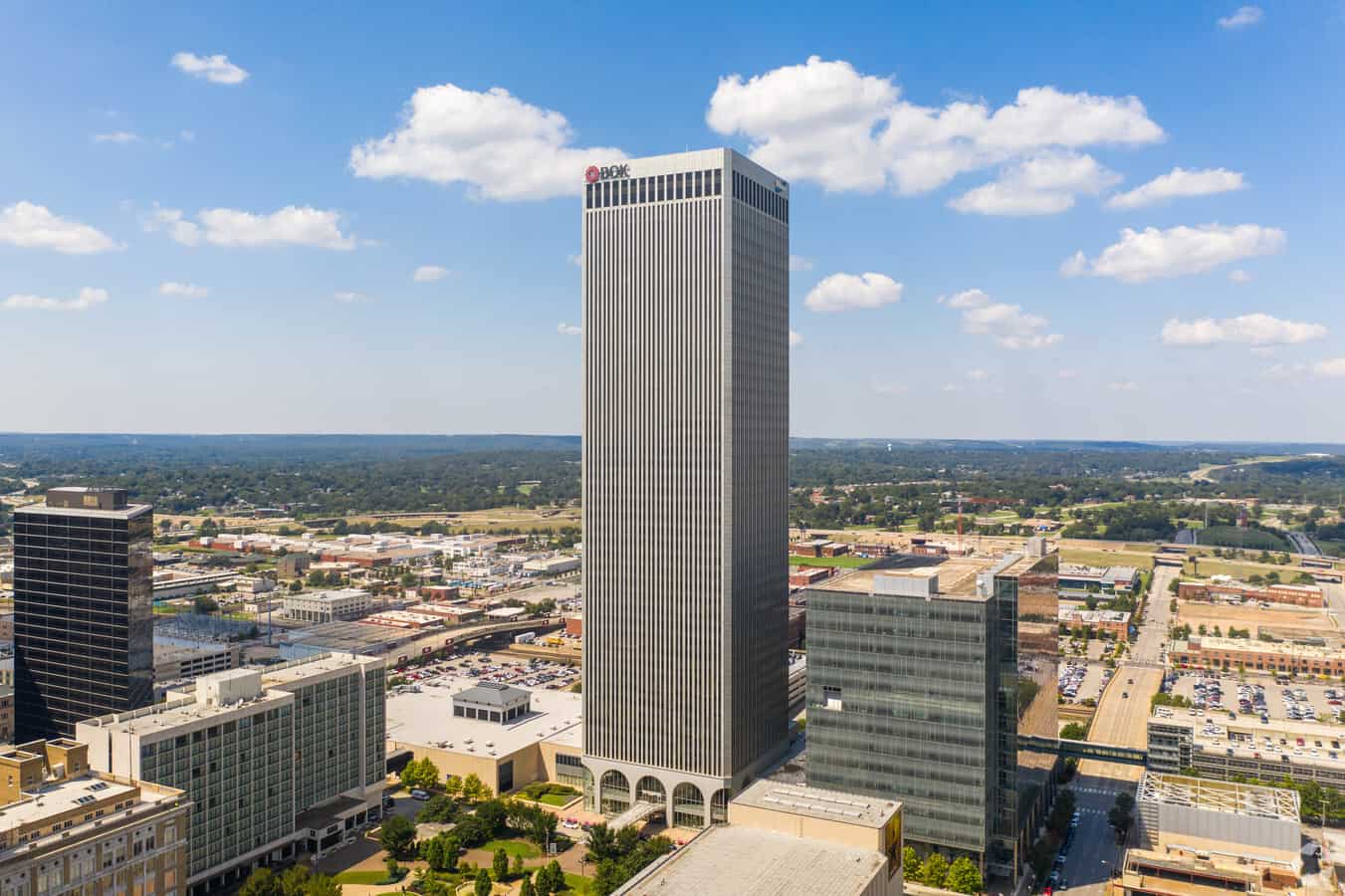 The world's first parking meter was installed in Oklahoma City.

On July 16, 1935, the world’s first parking meter, Park-O-Meter No. 1, was placed on the southeast corner of Robinson Avenue and on the First Street in Oklahoma City. The parking meter was an invention of the American lawyer and publisher, Carlton Cole “Carl” Magee.

The "Center of the Universe" is one of the most fascinating tourist spots in Tulsa, Oklahoma.

The “Center of the Universe”, also known as the ‘whisper chamber’, is a famous landmark in Tulsa, Oklahoma. It is a concrete circle, which is around 30 inches (76.2 cm) in diameter, and within the center is another circle made of 13 bricks. The “Center of the Universe” is famous for its mysterious phenomenon. When someone talks or makes a noise, the sound will hit the concrete circle and reverberate back.

Oklahoma State Capitol has a floor space of approximately 452,508 square feet and has 650 rooms. Constructed from 1914 to 1917, though the original design of the building includes a dome, it was only added in 2002. Moreover, Oklahoma State Capitol is the only U.S. state capitol that sits atop an active oil well.

Oklahoma is the only state that produces iodine.

The University of Oklahoma was founded in 1890.

James Garner was an alumnus of the University of Oklahoma.

American actor and producer James Garner attended the University of Oklahoma. He also received an honorary Doctor of Humane Letters degree at OU in 1995. For over five decades, Garner starred in several television shows and played more than 50 theatrical shows like The Great Escape, The Americanization of Emily, and Support your Local Sheriff!.

Turner Falls is a summer destination.

This waterfall is one of the tallest waterfalls in the U.S. It has a height of 77 ft (23 m) located in the Arbuckle Mountains of south-central Oklahoma. Turner Falls Park has an area of 1,500 acres (6.1 km2). The park contains caves and natural trails. Furthermore, it is one of the most famous destinations during summer to enjoy swimming, hiking and seeing old rock castles.

Currently, Oklahoma is home to seven astronauts. This includes the American astronaut and pilot William Reid Pogue, who supported Apollo 11. It is the first spaceflight that landed humans on the moon. It should also be noted that the state is also home to other individuals who have helped space exploration and equipment design.