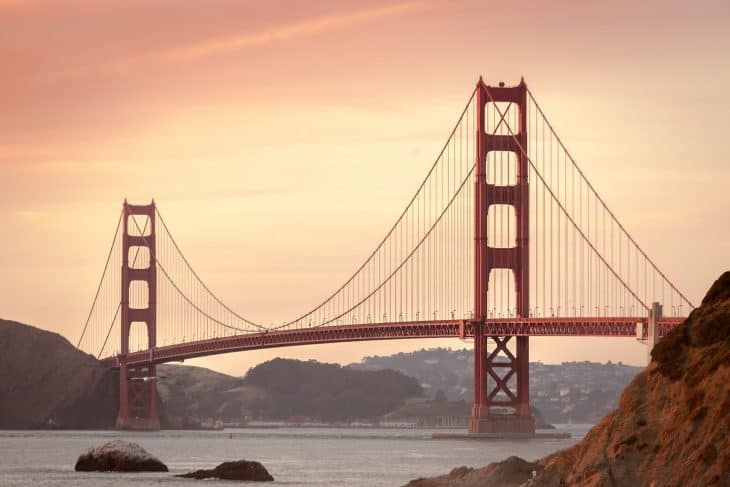 Countless songs, movies, books, and TV series showcase the beautiful state of California. The so-called golden state is home to beautiful beaches and well-recorded history. However, there’s more to it than being the home of Hollywood. Find out more about this sunny paradise with these captivating California facts!

The famous Windows XP wallpaper was taken in California.

If you’ve ever used a computer with a Windows XP operating system, odds are that you’ve seen the famous Windows XP wallpaper of a pleasant green hill and a blue sky. This wallpaper, named Bliss, is perhaps the most viewed photograph in history. One of the more obscure California facts is that the photo was taken in California.

Upon its release, people had quite a few speculations about the image’s location, with some even claiming that it wasn’t a real place and was just digitally manipulated. However, photographer Charles O’Rear actually took the photo in Sonoma County, California in January 1996. Captured during a visit to his girlfriend, O’Rear claims that the image was not digitally altered and sold the rights to Microsoft for an undisclosed amount in the year 2000.

The internet originated from California.

Dating back to the 1960s, the US Department of Defense funded a network called the Advanced Research Projects Agency Network (ARPANET). ARPANET allowed multiple computers to connect and communicate through a single network with the use of packet switching. This gave birth to one of the greatest achievements of the modern age: the internet.

In their first attempt to communicate through the internet, a computer in a UCLA lab was set to send a message to another computer at Stanford. They attempted to send the word “LOGIN” but only sent the letters “LO” because of a system crash.

California takes its name from a fictitious island from a Spanish novel.

The Spaniards referred to the lands from Alta California to Baja California as Las Californias, derived from a mythical island. A popular 16th-century Spanish romance novel called Las Sergas de Esplandián (The Adventures of Esplandián) describes the island as rich in gold and pearls. According to the novel, the islands’ residents included beautiful black women who wore gold armor and fought alongside Muslims.

The state goes by many nicknames.

California’s official nickname is The Golden State for the fields of golden poppies that bloom in the spring and the discovery of gold in 1948. However, California also goes by many other nicknames. For one, people also refer to California as The Land of Milk and Honey. This name originates from the Bible and likens California to The Promised Land because of its rich, fertile lands. California is also known as The Grape State, The Sunshine State, El Dorado State, and The Golden West.

Arnold Schwarzenegger once served as a California governor.

From 2003 to 2011, Austrian-American movie star Arnold Schwarzenegger served as the 38th Governor of California. Since 1983, Schwarzenegger has been a naturalized US citizen. Throughout his political career, he ran as a moderate Republican with socially liberal views and fiscally conservative stands.

Hollywood is home to the biggest motion picture studios in the world. However, it started off with humble beginnings, with filmmakers just attempting to evade the patents of Thomas Edison. Edison and his Motion Picture Company owned the patents related to motion picture production and often sued independent movie producers in the East Coast. This led movie makers to flee to California, where it was easier to avoid being sued by Edison.

California has the highest point in the contiguous US.

Although Alaska is home to several of the highest points in the US, California has the highest geographical point in the contiguous 48 states with Mount Whitney. Standing around 14,505 feet tall, Mount Whitney is the tallest mountain in the Sierra Nevada.

It also has the lowest point in North America.

California had a dog mayor.

In 1981, the people of an unincorporated town of Sunol, California elected a dog as the town’s honorary mayor. Named Bosco Ramos, the black labrador “served” as the town’s mayor until 1994. To this day, a statue of him stands in front of the Sunol post office. How’s that for curious California facts?

There are no wild grizzly bears in California.

Despite being the state animal and even being shown in the California flag, the California grizzly bear no longer lives in the state’s wilderness. Despite formerly being known as “The Bear State”, California’s nickname changed to “The Golden State” following the bears’ extinction.

California is home to the tallest and largest trees in the world.

Officially, California’s state tree is the California redwood. California redwood trees used to occupy most of Northern America, but now inhabit the coastal forests of California. However, there are two species of redwood trees that live in California, leaving it with two state trees. The first one is the coastal redwood (Sequoia sempervirens), which includes the tallest trees in the world. These trees can easily grow to a soaring 300 ft (91 m). The tallest specimen, a tree named Hyperion, reaching 379.7 ft (115.7 m) tall, making it the tallest living tree in the world.

The other state tree is the giant sequoia (Sequoiadendron giganteum). The Giant Forest of Sequoia National Park in California is home to the largest living single-stem tree. This giant sequoia tree, called General Sherman, is 275 ft (83.8 m) tall and has a circumference of 102 ft (31.1 m). It’s also one of the world’s oldest trees with an estimated age of around 2,300-2,700 years.

When you see a fortune cookie, you immediately associate it with Chinese food, because Chinese restaurants often serve these cookies. However, these fortune-filled snacks are not originally a Chinese tradition. In fact, it’d be rare to find them in China. Although many debates exist as to who exactly invented fortune cookies, it’s clear that they originated from and rose to fame in California.

California experiences a lot of earthquakes.

Falling within the Pacific Ring of Fire, California experiences a number of natural disasters such as floods, wildfires, droughts, and volcanic activity. Many fault lines run through California, with San Andreas Fault being the largest at 800 miles (1,300 km). Throughout the state, tectonic movements in the fault lines cause as much as around 37,000 California earthquakes each year, with many of them too minor to pose a threat.

The state has a diverse wildlife.

With over 4,000 species of plants and animals living in California, it has the biggest biodiversity among all the states. On average, scientists have identified around 400 species of mammals and 600 species of birds in the state’s ecology. The California clapper rail, San Francisco garter snake, and the California golden trout are some of the animals that you can only find in California.

In Southern California, a huge herd of bison thrive and roam the Santa Catalina Island. However, these bison did not inhabit the island naturally. Instead, a film crew had 14 American bison transported to the island for the filming of The Vanishing American.

Because of budget cuts, the crew decided not to return the animals to the mainland and left them in Santa Catalina Island. From there, the bison herd flourished and reached a population of around 150.

California is home to many major professional sports leagues.

California has the highest agriculture output out of all the US states.

The Golden State relies on many industries for its economy. While the agricultural industry is not its main source of revenue, California is still the highest producer of agricultural products in the United States.

In total, California alone produces around half of the nation’s fruits, vegetables, and nuts. Moreover, it also produces 99% of the United States’ commercial artichoke crops and 95% of the garlic crops.

The state highway signs of California have a shovel-like shape.

In the state highways of California, the signs have a rather odd shape. Instead of the usual circles or rectangles, California’s signs sport upward-facing shovel shapes, referencing the spades that miners used during the California Gold Rush.

The Hass avocado came from California.

Named after Rudolph Hass, the horticulturist first grew this tree in 1926. He sold fruits to his coworkers, as well as nurseryman Harold Brokaw. Eventually, the rich-tasting fruit achieved worldwide popularity. To this day 95% of California avocados trace its origins to the Hass avocado.

California has the hottest place in the US.

With a name like Death Valley, it’s not far-fetched to think that this desert valley is exposed to extremely harsh climate conditions. Sitting in the Mojave Desert in in Eastern California, scientists consider it the hottest and driest place in the United States.

Living in California can be expensive.

Farmers transport billions of bees to California to pollinate almonds.

Of all its produce, almonds are California’s biggest agricultural export. On average, California’s prosperous agricultural industry supplies up to 80% of the world’s almonds. Farmers owe their abundant harvest to billions of pollinating honey bees. During the annual blooming season, farmers transport around 30 billion bees to California to pollinate the almond crops. After this, they ship the bees to other states to pollinate other crops.

A palm and a pine tree stand next to each other in the middle of California.

In highway 99, near the midpoint of California, there’s a landmark that people often refer to as “Where the Palm Meets the Pine”. In this landmark, a palm tree stands next to an evergreen pine tree. The palm meeting the pine symbolizes the meeting of Southern and Northern California, with the palm representing the south and the pine representing the north.

California has some weird laws.

The California Gold Rush started the biggest mass migration in US history.

In January 1848, James W. Marshall first struck gold at Sutter’s Mill in Coloma, California. As the news of finding gold in California proliferated, around 300,000 people migrated to the state in a rush for gold. Many also regard the California Gold Rush as the first world-class gold rush in history. In 1949, the Gold Rush reached its peak, and people began referring to the miners as “forty-niners”.

The Gold Rush was bad news for the indigenous people in California, however. With all the gold-seekers rushing to California during the Gold Rush, Native Californians severely declined. They either starved, contracted diseases, or became casualties in the grim California Genocide. This is certainly one of the more poignant California facts.

California has a massive economy.

The Golden State is an economic giant, producing a gross state product of about $3 trillion, making it the world’s largest sub-national economy. California’s economy is diverse but relies mostly on domestic and international trade. Moreover, if the state of California were a separate country, it would have the fifth largest economy in the world.

San Jose was the first capital of California.

Although it’s known as Sacramento today, California’s first capital used to be San Jose. However, the legislators did not like their accommodations in San Jose and were set to relocate to Vallejo. As they arrived in Vallejo, though, their place was still under construction. In 1854, they relocated to what is currently the state capital, Sacramento.

California also had a Fur Rush.

One of the lesser-known California facts is that besides from the popular Gold Rush, the state also had a “Fur Rush”. In the early to mid-19th century, American and European hunters rushed to the state in hopes of hunting various mammals for their fur. At the time, California teemed with a great diversity of mammals such as seals, minks, otters, and beavers. Sadly but unsurprisingly, the Fur Rush drove many of these mammals near extinction.