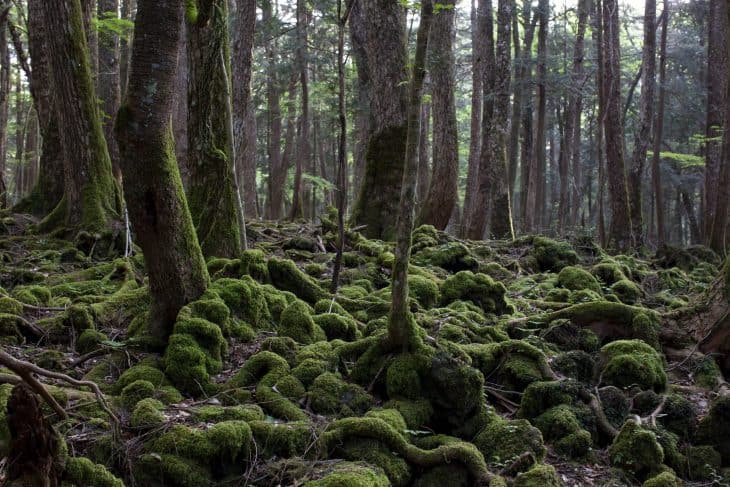 Aokigahara is probably one of the most interesting places to visit. Especially, if you are looking for something out of the ordinary. This forest features a very quiet and solemn environment. In contrast, however, Aokigahara is also notoriously famous as a suicide spot, thus getting its name, ‘Suicide Forest.’ Here are the 40 suspenseful and eerie Suicide Forest facts. If suicide or self-harm triggers you, please be careful in perusing this article, or stop reading here.

Aokigahara or the Suicide Forest is historically famous as yūrei's shelter.

The yūrei, or as the West knows them – ghosts, are illustrations in the Japanese folklore meaning ‘spirit’ or ‘soul’. People contribute this to the number of people who have committed suicide in the forest.

The Suicide Forest is one of the world's most popular suicide spot.

As reported, there were about 105 dead bodies from the forest in 2003. Due to its secluded location and numerous trees covering the place, it became a “suitable” place for various individuals to commit suicide.

There are two common ways to commit suicide in Aokigahara.

The most common way to commit suicide in Aokigahara is either by drug overdose or hanging. Based on the reports, suicide cases go up during the month of March, the end of the fiscal year in Japan.

The government stopped the publication for its death toll in 2011.

In 2010, the authorities have recorded at least 200 individuals that wanted to commit suicide in Aokigahara. However, as of 2011, the Japanese government stopped the announcement of the death toll in an attempt to promote the forest as an area of natural beauty instead of its notorious reputation.

Some victims camp in tents before committing suicide.

Every year, hundreds of people who wants to commit suicide go to Aokigahara and camp in tents. They camp there for a few days, pondering whether they would end their life or not. Fortunately, some of them on these “personal camping retreats” have decided to carry on with their life.

Mobile phones will work in the Aokigahara.

This debunks the belief that phones don’t work in Aokigahara because of magnetic iron. Mobile phone calls are actually working in most of its areas including the internet access. People can still call for help through their phones if ever they got lost.

Many believe that compasses will go haywire in Aokigahara.

Apart from mobile phones, many also thought that compasses do not work in the Suicide Forest due to its elements. However, people who have used a compass at a normal height didn’t have any problem.

Way back in medieval Japan, suicide is an honorable act.

During the feudal era (1185-1603 CE) in Japan, suicide is an act of honor. For instance, samurai warriors would rather take their own lives than to surrender or die in the hands of their enemy.

The Japanese Army trains in Aokigahara.

Suicide Forest tourists and hikers are using plastic tapes to secure their way out.

The Suicide Forest is full of trees and has many rocks, thus, everything looks almost the same. In recent years, Aokigahara’s visitors have begun using plastic tapes to mark their way. By doing so, it ensures their way out of the forest as well. Definitely one of the more useful Suicide Forest facts if you want to explore the forest.

Aokigahara has assigned trails leading to some tourist attractions near Mount Fuji.

There are pathways from the lush of Aokigahara to some tourist spots. Following these pathways will lead you to Lake Sai Bat Cave, Fugaku Wild Cave, and Narusawa Ice Cave. These are the three largest lava caves at the foot of Mount Fuji, with the latter two being popular tourist attractions. Narusawa Ice Cave is a frozen cave all year round, while Fugaku Wild Cave is home to silkworms.

You can find the small Japanese mole in Suicide Forest.

Aokigahara is home to the hundreds of small Japanese mole (Mogera imaizumii). The small Japanese mole came from the Talpidae family (digging animals such as desmans and shrew mole). This mammal is native to Japan. Though they are extinct in some places in the country, at Aokigahara, they live relatively well.

There are different mammals and numerous species of insects in Aokigahara.

Other mammals that live in Aokigahara are the Asian black bear, deer, wild rabbit, mice, boar, fox, Japanese squirrel, and Japanese mink. It is also home to various insects including ground beetles, numerous species of butterflies, and so much more.

The Suicide Forest has a diversity of bird species.

The Suicide Forest is perfect for birdwatchers or a person who enjoys observing birds in their natural environment. Here you can spot many bird species such as the Japanese white-eye, Japanese thrush, Siberian thrush, great spotted woodpecker, pygmy woodpecker, Eurasian jay, Japanese grosbeak, willow tit, long-tailed tit, great tit, and lesser cuckoo are just some to name a few.

You may spot dead bodies while hiking Aokigahara.

Apart from being an excellent spot for the birdwatchers, be warned that you should also be “brave enough” or mentally prepared for the possibility of spotting a dead human body.

Retrieval of the dead bodies is conducted every year.

The surge of suicide rates in the Forest has driven the authorities to put a sign at random places in Aokigahara urging suicidal individuals to ask for help instead of taking their lives.

Not all suicide victims are found.

Although there is an annual search for the dead bodies in Aokigahara, it’s common for a suicide victim’s body not to be found. The Suicide Forest’s density and its challenging terrain make it nearly impossible to retrieve all of the remains.

The novel of Seichō Matsumoto, ‘Towering Waves’ (Nami no Tō) has boosted Aokigahara’s popularity. This book was launched in the early 60s. Since then, many people became curious and have aspired to visit Aokigahara.

Due to its nature and intriguing history, media around the world have featured Aokigahara in several forms. Video games, books, songs, films, literature, anime, and manga have already featured or referenced Aokigahara. Popular films, such as “The Forest” and “47 Ronin” have also been inspired by the story of Aokigahara.

Logan Paul made a costly mistake in Aokigahara.

In 2017, YouTube star, Logan Paul uploaded a travel vlog to his YouTube channel about his trip to Japan, particularly Aokigahara. He had included a corpse of a man who had died by hanging himself in the Suicide Forest. After receiving backlash from the public, he removed this video from his channel and uploaded a written apology on his Twitter, as well as an apology video on his YouTube channel. He was also removed from Google Preferred, and most of his sponsors have stopped working with him due to the incident. Eventually, he donated $1 million to Suicide Prevention Agencies and continued uploading his daily vlogs to his channel 3 weeks later after the controversy.