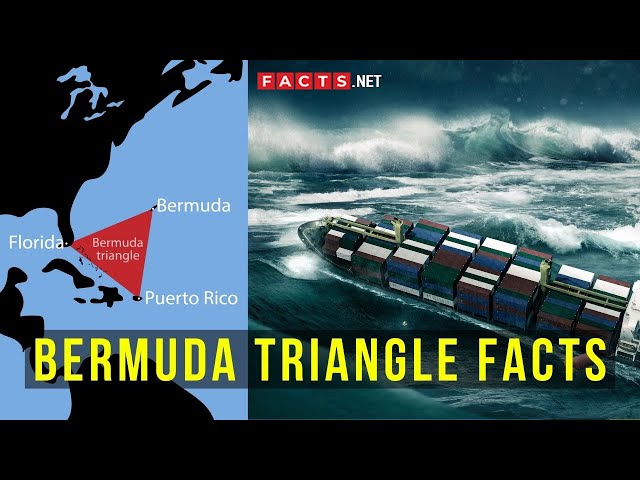 For many, people talked about the Bermuda Triangle with a mix of curiosity and fear. This is because it is one of the most mysterious places on Earth. Located in the western part of the North Atlantic Ocean, between Bermuda, and Puerto Rico, it has become a hotbed of unsolved mysteries. No one keeps track, but in the last century, dozens of ships and planes have simply vanished without a trace within the infamous triangle.

Here is the most interesting info out of all the Bermuda Triangle facts out there. Despite all these strange accounts and unfortunate incidents, it remains to be one of the busiest shipping lanes as many ships and planes still travel through it.

There have been several speculations on the unsolved and unexplained disappearances in the Bermuda Triangle. Some of these include theories on the paranormal and extraterrestrial while some are based on scientific studies. But up to now, the question of ships and planes disappearing in the Bermuda Triangle still remains unanswered.

Will we ever really find an answer? No one really knows. While we wait for the scientists to do their thing, feel free to check out what we do we know about it. Dive into our compilation of Bermuda Triangle facts below.

Location of the Bermuda Triangle

The American author, Vincent Hayes Gaddis, invented the name ‘ Bermuda Triangle’ and first used it on the cover article in the February 1964 issue of Argosy magazine. He publicized several stories of paranormal and peculiar phenomena in the Bermuda Triangle.

Stories about the Bermuda Triangle began in the time of Christopher Columbus.

These are Bermuda Triangle facts that started it all. Some people believe that stories about the mysterious events in the Bermuda Triangle began with Italian colonizer Christopher Columbus. Based on his accounts, on October 8, 1492, Columbus looked at his compass. He noticed that it gave unusual readings. The compass did not point in the magnetic north, a point on the Earth’s surface where its magnetic field points directly downwards.

Edward Van Winkle Jones was one of the first to write about the Bermuda Triangle.

The journalist Edward Van Winkle Jones was one of the first to document the disappearances in the Bermuda Triangle in a 1950 article in The Miami Herald. He reported the disappearance of ships and planes in the area, including five US Navy torpedo bombers that vanished on December 5, 1945, as he said: “they were swallowed without a trace.”

George Sand wrote about the loss of several planes and ships in the Bermuda Triangle.

The French romantic writer George Sand wrote a short article, “Sea Mystery at Our Back Door,” published in Fate magazine (a US magazine about paranormal phenomena). It covered the loss of ships and planes in the Bermuda Triangle, including Flight 19.

Flight 19 was the code name for Five Grumman Avenger bomber planes that took off from the naval base in Florida on December 15, 1945, but never returned. Sand’s article was one of the first to lay out the triangular area where the disappearance took place, and also one of the first to suggest the supernatural element to the incident.

Flight 19 was a group of five TBM-type aircraft or military aircraft that disappeared in the Bermuda Triangle on December 5, 1945. They lost contact with the United States Navy while having their routine navigation and combat exercise. All crew members were never found again. The navy investigators could not identify the real cause of the loss of Flight 19.

Cyclops was one of the biggest ships that disappeared in the Bermuda Triangle.

Cyclops was approximately 550 feet long with more than 300 crew and about 11,000 tons or 9,979,032.1 kilograms of manganese aboard. Since 1910, the ship had been sailing the Baltic Sea, Caribbean, and Mexico, assisting the shipping of coal around the world, and helping refugees. Cyclops also became a naval asset, transporting coal to fuel other ships and troops.

Cyclops vanished in the Bermuda Triangle without a trace.

While returning from a voyage to Brazil, the Cyclops vanished in Bermuda Triangle in early March 1918. The ship sank in somewhere between the area of the Chesapeake Bay and Barbados. Despite being equipped to send an SOS distress call or Save Our Ship signal, it did not do so. Even after a thorough search, there was no discovery of the ship’s remains. Interestingly, after more than 100 years now, its fate remains unknown.

The loss of Star Tiger aircraft was also one unsolved incident in the Bermuda Triangle.

British South American Airways, an airline in the United Kingdom, owned and operated the Star Tiger. It is a passenger aircraft that disappeared in the North Atlantic ocean without a trace when it was between Santa Maria in the Azores and Bermuda on January 30, 1948. The loss of the aircraft added to the mysterious nature of the Bermuda Triangle.

The disappearance of Douglas DC 3 occurred on December 28, 1948.

Douglas DC 3 is a propeller-driven aircraft and one of the most reliable aircraft designed and built in the 1940s. However, it was no match for the supernatural. The Douglas DC 3 disappeared as it was passing through the Bermuda Triangle on December 28, 1948, on its flight from San Juan, Puerto Rico to Miami, Florida. The aircraft contained three crew members and 29 passengers. The official investigation could not determine the probable cause of the loss and remains unsolved.

A cabin cruiser named 'Witchcraft' disappeared in Bermuda Triangle in 1967.

‘Witchcraft’ was a 23-foot luxury yacht that left Miami. Onboard was Captain Dan Burack and his friend, Father Patrick Horgan. After reaching the shore, the captain called the coast guard stating that their ship hit something, but there was no considerable damage.

The coast guard set off immediately to help or tow the ‘Witchcraft.’ However, upon reaching the location, there were no signs of any ship being stranded or any evidence of it ever being there. What’s more intriguing is that the yacht has numerous life-saving devices including life jackets, lifeboats, flares, distress signal devices, but none of them were used – the ship disappeared without a trace.

The mystery of Carroll A. Deering is one of the most famous incidents in maritime history.

Carroll A. Deering was a huge cargo ship. It measured 255 feet long, 44 feet wide, and weighed 1,879 tons. The owner named the ship after his son. It was built in Bath, Maine for commercial use. Carroll A. Deering has been in service for just one year before the mysterious incident happened in Bermuda Triangle.

Carroll A. Deering is famous for being a 'Ghost Ship'.

On January 31, 1921, a surfer found Deering wrecked on Diamond Shoals off Cape Hatteras in North Carolina, and all of its crew was gone. Reportedly, two days before the discovery of the ship, a crew member yelled that the ship had lost its anchor and continued sailing on. To this day, speculation on the disappearance of all the crew members continues. There’s still no clear explanation for the incident.

Methane hydrates could be one cause of the disappearance of ships in the Bermuda Triangle.

Some researchers believe that the presence of methane hydrates, (a form of natural gas), in the ocean could be one cause of the disappearances. Some laboratory experiments proved that bubbles could sink a ship by decreasing water density. Moreover, some studies also show that periodic methane eruption may create bubbling water which cannot provide buoyancy.

Waterspouts or tornadoes could also be one reason for the mysterious disappearances.

Several waterspouts or tornadoes occur in the Bermuda Triangle, and during this phenomenon, water from the ocean rises hundreds or even thousands of feet from the air. In addition to tornadoes, strong water current moving along the edge of the Bermuda Triangle can easily overturn a ship. These waves can be hundreds of feet high and could knock out planes that fly close to the water.

A magnetic phenomenon in Bermuda Triangle could also cause disappearances.

As mentioned above, Bermuda Triangle is one of the places on earth where compasses point towards the true north, (the geographic North Pole), instead of pointing to the magnetic north, (the shifting magnetic North Pole). Some theories suggest that this phenomenon is why some captains and pilots complain about compasses not working properly and going in the wrong direction.

Some theories suggest that the Bermuda Triangle is a portal for aliens.

According to other wild theories, some writers say that UFOs could be one reason for the disappearance of ships and planes in the Bermuda Triangle. They say that the area is an alien portal, which aliens use to travel to and from their home planet. Moreover, Bermuda Triangle is like a gathering station for aliens, a place where they abduct people, ships, and planes for research.

Some sci-fi enthusiasts believe that Bermuda Triangle is a 'wormhole'.

Some science fiction enthusiasts believe that the Bermuda Triangle is a ‘wormhole,’ or like a time machine, it connects two points in space-time. Though wormholes haven’t proven to exist, some people could not avoid associating them with the mysterious disappearance of ships and planes in the Bermuda Triangle.

Human error can be a common scenario in the Bermuda Triangle.

One of the most common explanations for the unusual disappearance of planes and ships in the Bermuda Triangle is human error. The area has several islands that are difficult to distinguish from another, which may be confusing. Disorientation or confusion of pilots and captains may result in a deadly situation, like running out of fuel before reaching the shore.

They’re formed by microbursts, blasts of air that come from the bottom of the clouds and hit the ocean, and they create waves that can sometimes be very big once they begin to interact with one another. Meteorologists say these formations have the power to bring down planes and ships. They can reach 170 mph, the equivalent of a Category 5 hurricane.

The number of disappearances in the Bermuda Triangle is not that significant despite its fame.

Interestingly, the percentage of disappearance in the Bermuda Triangle is not that significant despite its reputation. In other words, every incident that happens there between now and then was highlighted so much due to its history.