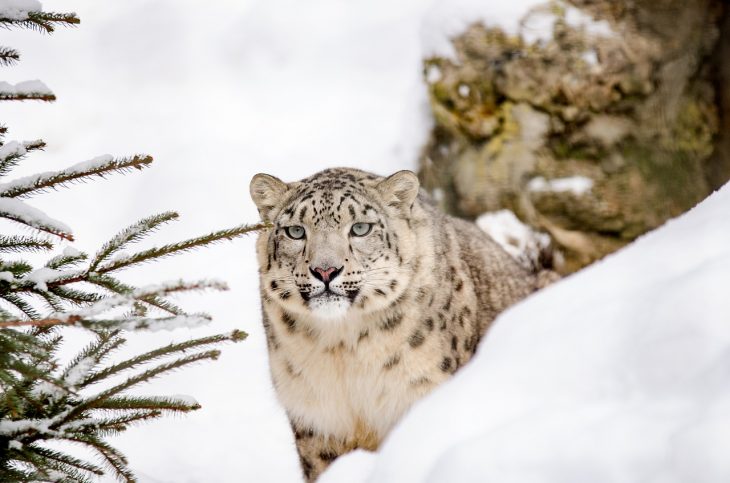 As one of the world’s most elusive species, snow leopards have an air of mystery that keeps experts guessing. Despite being a big cat, they possess unique traits that set them apart from other felines. Only found in the cold mountains of Asia, the snow leopard thrives in the isolated silence of the highlands. Find out more about these fascinating animals with these snow leopard facts.

Table of Contents
01 There's a high probability that lion, leopard, and snow leopard are hybrids.
02 Snow leopards are more related to tigers than leopards.
03 Snow leopards are smaller than leopards.
04 A snow leopard has soft and thick fur.
05 Snow leopards can tolerate extreme freezing temperatures.
06 They can kill prey heavier than them.
07 Snow leopards can breathe in the thin mountain air.
08 The snow leopard's paws serve as snowshoes.
09 Snow leopards are not aggressive to humans.
10 They only attack livestock when there is a lack of food.
11 Snow leopard's tail helps them to balance in the rocky mountain slopes.
12 Snow leopards do not roar.
13 They can use their tail as a "muff" when there's a blizzard.
14 Its eyesight is 6 times better than a human's.
15 They have the thickest fur of all cats.
16 Snow leopards carry their cubs in their womb for 3 to 3.5 months.
17 The cubs will start to learn how to hunt as early as 3 months.
18 They have no natural predators.
19 Their population is still at very high risk.
20 Snow leopards like biting their tails.
21 They are also known as “ghosts of the mountain.”
22 The highest altitude ever recorded for a snow leopard climb is 5,859 meters.
23 Snow leopards have more than 25,000 hairs per square inch.
24 Snow leopards have very powerful legs.
25 They can run very fast.
26 They have built-in "shock absorbers."
27 They live up to 25 years in captivity.
28 During the mating season, they may mate up to 35 times per day.
29 Young adults move away to avoid inbreeding.
30 China leads the snow leopard poaching incidents.

There's a high probability that lion, leopard, and snow leopard are hybrids.

According to studies, the lion, leopard, and snow leopard’s mitochondrial genomes have more similarities compared to their nuclear genomes. In other words, this may indicate that these big cats’ ancestors could have been hybridized into each other during their evolution. How’s that for interesting snow leopard facts?

Snow leopards are more related to tigers than leopards.

While their names might suggest otherwise, snow leopards share more genetic traits with tigers than leopards.  Snow leopards can only be found in Central and South Asia, while leopards naturally live in Africa and Asia.

However, both species live in grasslands, rainforests, semi-arid areas, temperate forests, and mountains. Similarly, both snow leopards and leopards face a declining population due to habitat loss and poaching.

Snow leopards are smaller than leopards.

One of the snow leopard facts that can help you tell them apart from leopards is their significantly smaller size. In adulthood, the snow leopard stands about 2 ft in height and can reach up to 7 ft in length, weighing between 75 to 120 lbs.

A snow leopard has soft and thick fur.

Because snow leopards live in high altitudes, they can endure temperatures from 7ºC down to a freezing -40ºC. Furthermore, snow leopards can also adapt to warmer weather, able to survive in heat up to 30ºC.

They can kill prey heavier than them.

As strong predators, snow leopards can take down 2 or 3 times heavier than their own body weight. Generally, the snow leopard feasts on small prey, including birds, hares, rodents, and marmots. However, they may also go for bigger targets such as blue sheep, goats, and mountain ibex. Definitely one of the more intimidating snow leopard facts.

Snow leopards can breathe in the thin mountain air.

Aside from their body insulation, snow leopards also developed larger nasal cavities to breathe in the thin air in their habitats. This distinct feature allows them to warm the icy mountain air that passes through their nose.

Thus, the air becomes warm before it goes to the lungs, making them suitable to live in cold mountains.

When attacking their prey, snow leopards usually stalk their targets first, only striking once they are 20 to 50 ft (6-15 m) away. The snow leopard’s paws serve as snowshoes which provide them strong traction to the ground as they chase their prey across icy surfaces.

Snow leopards are not aggressive to humans.

Compared to the rest of the big cat family, the snow leopards are the least likely to attack humans. To this day, there have been no recorded cases of snow leopard attacks towards humans.

They only attack livestock when there is a lack of food.

While there has never been a record of a snow leopard attack against humans, they can still be a nuisance to their livelihood. In times of scarcity, snow leopards have been spotted to attack livestock. Interestingly, they tend to run away and abandon their food when they see humans.

Snow leopard's tail helps them to balance in the rocky mountain slopes.

The snow leopard’s tail helps them balance when ascending and descending the rocky, steep slopes of their habitats. When hunting, this body mechanism assists the snow leopard navigate narrow and difficult terrain to catch their prey.

Snow leopards do not roar.

Unlike other big cats, these leopards cannot roar because of their throat structure. Instead, they make non-aggressive sounds like meowing, purring, growling, and hissing. They also communicate through distinct chuffs, or a loud puffing sound made by air coming from the nose. How’s that for interesting snow leopard facts?

They can use their tail as a "muff" when there's a blizzard.

During heavy snows or blizzards, snow leopards usually wrap their tail around their face to keep them warm. This also explains why the snow leopard has the longest tail compared to any cat family, reaching over 1 m in adulthood.

Its eyesight is 6 times better than a human's.

Snow leopards have round-shaped eyes, ranging from pale green to grey in color. To hunt their prey in the low visibility of their habitats, snow leopards evolved with an eyesight 6 times better than the average human.

They have the thickest fur of all cats.

Over the millions of years of evolution, snow leopards developed extremely dense fur that can withstand their cold environments. On average, their fur usually measures 5 cm on their back and sides, while it can reach more than 10 cm long on their bellies.

Snow leopards carry their cubs in their womb for 3 to 3.5 months.

Mother snow leopards normally give birth in litters of 2 up to 3 cubs. During these early stages, the snow leopard’s cubs need their mother’s complete care. Despite growing fast and developing their hunting abilities early in life, snow leopard cubs usually stay with their mother for up to 2 years.

The cubs will start to learn how to hunt as early as 3 months.

Although snow leopard cubs grow relatively fast, cubs are born completely defenseless. It takes a week for them to open their eyes, while they can only eat solid food at 2 months old. As they reach their 3rd month, snow leopard cubs start to follow their mother on hunts.

They have no natural predators.

For over 3 million years, the snow leopard has made the high and cold mountain ranges their territory. These isolated areas keep them away from stronger predators, essentially placing snow leopards at the top of the food chain.

Their population is still at very high risk.

While the IUCN no longer classifies the snow leopard as an endangered species, they still remain vulnerable and significantly close to extinction.  Due to poaching and habitat loss, its population in the wild still remains at very high risk.

One of the adorable snow leopard facts is that they enjoy biting or nibbling on their tails. While the exact reason still uncertain, some suggest that it is an act of play. Others think that it can also be an act to lessen their stress, especially in captivity.

They are also known as “ghosts of the mountain.”

As elusive creatures that avoid humans, you’d rarely encounter a snow leopard in the wild. As such, they earned the nickname ‘ghosts of the mountain.’ With most of their lives spent in isolation, scientists still struggle to examine snow leopards’ social behavior.

The highest altitude ever recorded for a snow leopard climb is 5,859 meters.

Usually, snow leopards can live at an altitude of up to 4,500 m. However, a snow leopard has been spotted to live as high as 5,859 m. If you have a hard time picturing that, it’s almost the height of Mount Logan – the highest mountain in Canada.

Snow leopards have more than 25,000 hairs per square inch.

Measuring a snow leopard including its tail, its overall body length can reach 7 ft. However, this cat can leap 7 times their own length at an equivalent of 50 feet. With its powerful legs, it can outleap any animal.

They can run very fast.

The snow leopard’s hind legs are longer than its front legs. This unique leg structure of helps them to have a very quick first step and rapid burst of speed. On average, snow leopards can run at a speed of 64 kmph.

They have built-in "shock absorbers."

One of the coolest snow leopard facts is that their wide chest works like shock absorbers. Its heavily-muscled chest reduces the impact while descending down the steep terrains, helping them navigate the terrain more efficiently.

They live up to 25 years in captivity.

In captivity, snow leopards can live for about 20 to 25 years. However, its lifespan in the wild remains undetermined. That said, experts estimate that a wild snow leopard can live as long as a leopard, from 15 to 18 years.

During the mating season, they may mate up to 35 times per day.

For snow leopards, the mating season normally only lasts between 5 to 8 days. After this period, male snow leopards tend to stop looking for another partner. Studies suggest that this short period is caused by the briefness of the late winter season. However, snow leopards make the most of what days they have, mating between 10 to 35 times per day.

After 2 years, the “young adult” snow leopard can live a life of its own. Typically, they migrate over substantial distances, while some even cross a new world of hunting grounds. Researchers believe that snow leopards do this to avoid inbreeding among their families.

Numerous agencies work to protect the snow leopard. Among these organizations, agencies such as Snow Leopard Trust and the Snow Leopard Conservancy support and fight for its survival.

Today, snow leopards are still found in over 10 countries, but 90% of the poaching comes from 5 specific countries. Unfortunately, Mongolia, India, Tajikistan, Pakistan, and China have the largest share of the snow leopard population.