Quick Facts
Essential Facts
Interesting Facts
Table of Contents
01 Quokka Facts Infographics
02 Quokkas Occupy Only a Small Portion of Australia
03 Quokkas Need Very Little Water
04 Quokkas Eat Their Food Twice
05 Quokkas Produce No More Than Two Offspring a Year
06 Quokka Mothers Sacrifice Their Own Young
07 Quokkas Are Not Afraid of People
08 You Can Go to Jail for Touching a Quokka
09 Quokkas Are Extremely Manipulative
10 Quokkas Often Annoy Local Residents
11 Quokkas Are Generally Nocturnal
12 Quokkas Can be Dangerous
13 Quokkas Are Believed to be the World’s Happiest Animals
14 Rottnest Was Named after Quokkas Because of a Mistake
15 Quokkas Were Once Called Something Else
16 Before the Europeans Arrived, Quokkas Had No Natural Enemies
17 Quokka Facts – Facts about Quokkas Summary 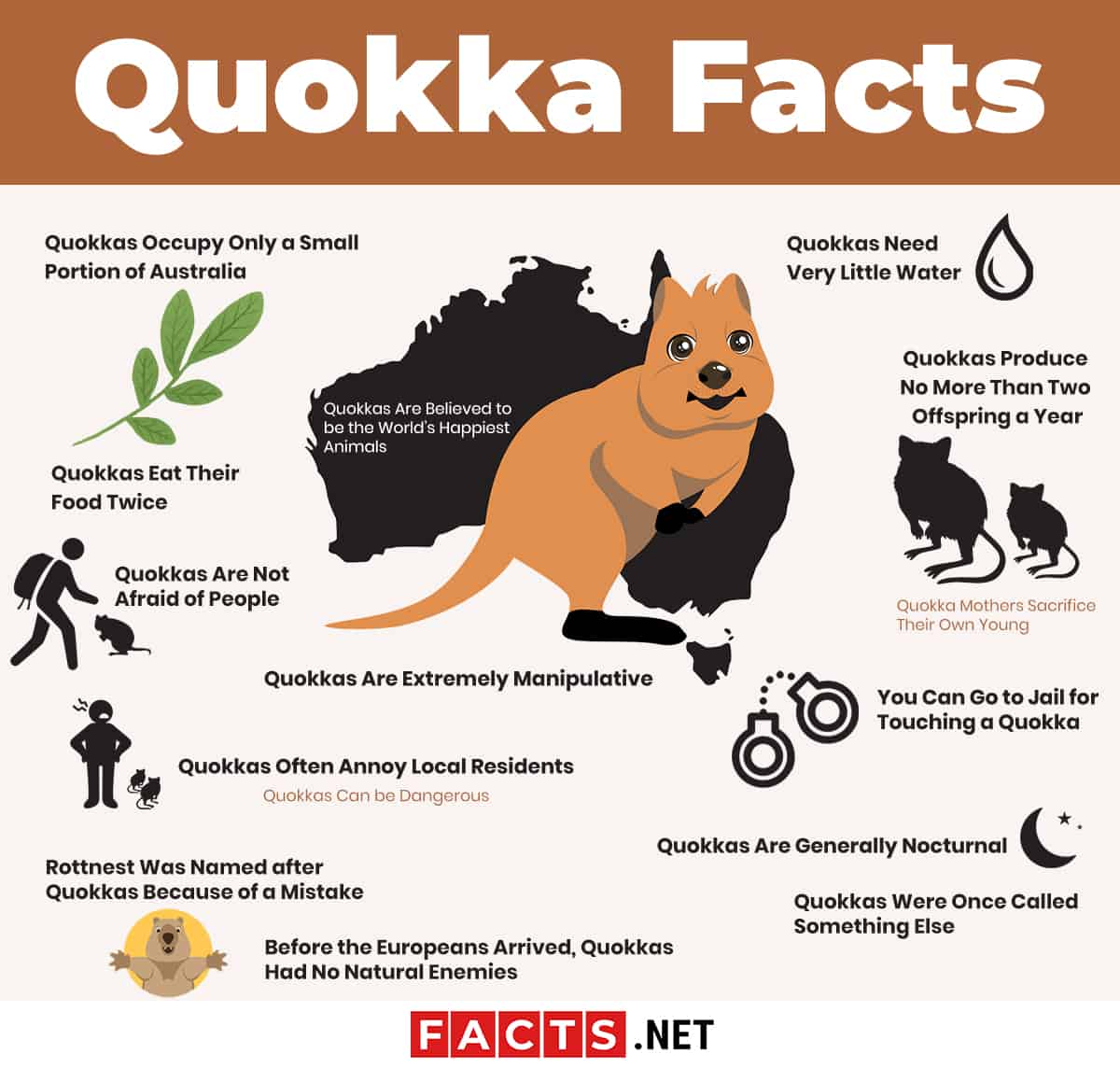 Quokkas Occupy Only a Small Portion of Australia

The first of our quokka facts reveals that their habitat is very limited. Though almost as iconic to Australians as kangaroos, quokkas only occupy a few portions of the country. On the mainland, most live in the Two Peoples Bay Nature Reserve, which is a protected area. The rest can be found on Rottnest Island and on Bald Island. Though not endangered, the very few habitats they occupy put them at risk due to urban growth and ever expanding agriculture.

Another of our quokka facts involves just how little water they need in order to survive. Although these animals prefer to live near bodies of water, they rarely ever drink. This is because they can extract most of the water they need from the plants they eat – their favorite being the guichenotia (a flowering bush). When water supplies are low, and so long as their food supplies remain stable, quokkas can go without water for as long as a month.

Quokkas survive on leaves and grass, but they don’t actually chew their food – they simply rip out vegetation, stuff it into their mouths, and swallow. This isn’t a good way of breaking down food, nor an efficient way of extracting nutrients from it. So, quokkas have a unique solution – they’ll regurgitate their food and eat it again. Since the cud they regurgitate is a lot more processed, their digestive systems can better extract the vital nutrients from it the second time around.

Quokkas Produce No More Than Two Offspring a Year

Quokkas on the mainland mate frequently, but females rarely have more than one child a year. At most, they’ll have two. Those on Rottnest only breed from January to March when it’s cooler. Gestation only takes one month, after which time babies make their way into their mothers’ pouches for protection, warmth, and to suckle. Infants are called joeys and stick with their mothers for several months before going off on their own. After a year, they’re ready to mate.

Quokka Mothers Sacrifice Their Own Young

Perhaps the most disturbing of our quokka facts has to do with their maternal instincts. Many other animals will fight, and even die, for their children, but not so with quokka mothers. When threatened, quokka mothers pull their joeys out of their pouches and throw them on the ground, where they’ll squeal. The sound attracts the predators, who then eat the babies, giving the mothers time to get away. As far as quokka mothers are concerned, they can always have another child.

Quokkas Are Not Afraid of People

Another of our quokka facts reveals that they have absolutely no fear of human beings whatsoever. They have so few natural enemies and have been isolated for so long that they rarely run away from bigger animals – which is yet another reason why they are at risk. This is especially true on the islands, where people are allowed to get up close to them. Most people also find them cute and unthreatening, which is another reason they aren’t hunted down.

You Can Go to Jail for Touching a Quokka

Although many people find quokkas cute and adorable, it is absolutely illegal to make pets out of them. They’re not even allowed to be touched. Visitors are permitted to get near the creatures in special reserves, especially on Rottnest Island, where picture-taking is permitted. You can, however, get in trouble for touching one. Violators can be fined up to Aus$2,000 and face prosecution. No one is sure whether this law exists to protect the quokkas or the people.

One of our little-known quokka facts is that their playfulness is actually just a clever deception. They’ve adapted to people and have learned what it is that excites us and makes us happy. They have even learned a few tricks which earn them many fans among the tourist hoards who flock to see them. This is all just a ruse to get food, however. This is also why quokkas have set up colonies near hostels, homes, and even tourist sites.

Although quokkas come across as incredibly cute and adorable to tourists, those who live near them feel otherwise. Quokkas are attracted to urban areas in search of food, which makes them vulnerable to traffic and predators, like dogs. Since quokkas think nothing of walking into cafes, restaurants, homes, and private gardens, they can be a nuisance to business and home owners. Despite the ban on touching and killing them, annoyed and inconvenienced residents sometimes take the law into their own hands.

Quokkas prefer to be active at night when it’s cooler, so this is also when they eat the most. They’re not too strict about it, however, since they can also be active when the sun is up. During the day, they prefer to sleep in shaded areas under trees and tend to pick the same spot all the time. Though they generally get along with each other, fights can break out between them for the same sleeping and eating spots.

Quokkas Can be Dangerous

While these creatures can be amusing, adorable, and playful, they are still wild animals. If cornered, provoked, or attacked, they let out a loud shriek. If that doesn’t work, they’ll attack with their sharp fangs and claws. A favorite method of attack is to sink their teeth into flesh, then dangle from that bite as they scratch and claw at their victim. The Rottnest Island Infirmary claims to treat about a dozen patients every year for quokka bites and scratches.

Quokkas Are Believed to be the World’s Happiest Animals

Quokkas are extremely sociable animals who are curious, fearless, playful, and generally very cute to humans; especially since some actually appear to smile. They’ve adapted to people in populated areas, as well as to those who visit them on their isolated islands. Their antics with each other, with some other animal species, and with human beings, have led many Australians to dub them the “happiest animals in the world.” Zoologists don’t think this is actually true, however. They believe people merely interpret quokka behavior that way.

Rottnest Was Named after Quokkas Because of a Mistake

In 1658, Dutch sailor Samuel Volckertzoon became the first European to land on Rottnest Island, and thought that quokkas were a species of wild cat. The following year, the Dutch sea captain, Willem Hesselsz de Vlamingh, set foot on the island and thought that quokkas were actually giant rats. Because there were so many of the creatures, he named the island after them and their numbers. “Rotte” is old Dutch for “rat”, so Rottnest translates into English as “rat’s nest”.

Quokkas Were Once Called Something Else

The name “quokka” actually comes from the Aboriginal language of the local Nyungar (also called Noongar) people. This tribe of people still exists today, mostly in Noongar Country, but also throughout the rest of the continent. The Nyungars called the creatures “gwaga”. Since the early European settlers were unfamiliar with the Nyungar language, what they actually heard was “quokka”, which is what they’re still officially called today. Though generally pronounced as two syllables (KWOH-kuh), some pronounce it as three (ku-WO-kuh).

Before the Europeans Arrived, Quokkas Had No Natural Enemies

Although the Aboriginal people hunted quokkas for their food and for their fur, the creatures had few other natural enemies, especially those on the islands. But when the early European settlers arrived on the Australian mainland, they also brought with them dogs, cats, and foxes, which prey on quokkas and other local species. They also brought over rabbits and rats which compete for local food sources. Since their introduction into the Australian ecology, 10 native animals have since become extinct. 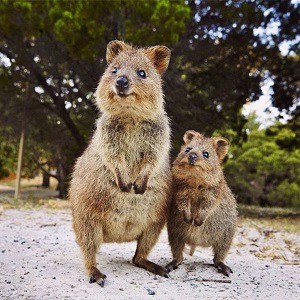 Quokkas are marsupials, similar to kangaroos in that they hop, keep their young in pouches, and are sociable. Though adored for their cuteness and for their ability to manipulate people in exchange for food, they can be dangerous if provoked. Nocturnal creatures, they can be active during the day and can go without water for long periods because they extract liquid from food. Quokkas are not yet endangered, but because of their fearlessness and limited habitat, they are at risk.