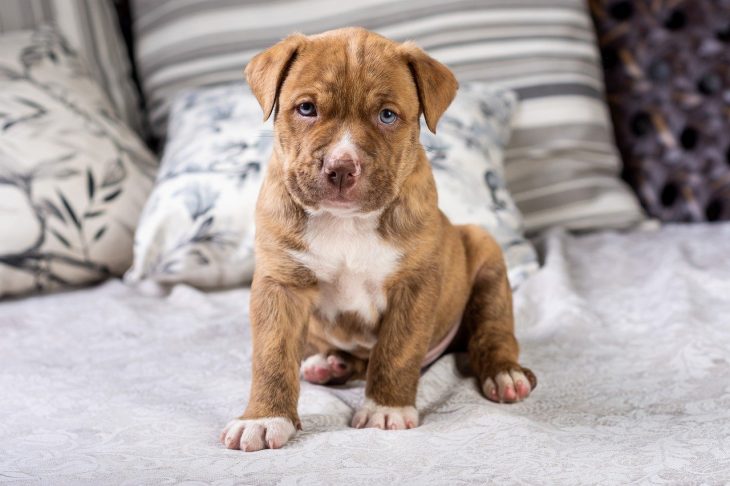 Once used to bait bears and other such bloodthirsty forms of entertainment, pitbulls have since become treasured companions and family friends. Despite their fearsome reputation, pitbulls can be the most caring and affectionate of dogs with the proper training. Some even call them nanny dogs, for how gentle they can be around children. Learn more about these fascinating animals with these pitbull facts.

Quick Facts
Essential Facts
Interesting Facts
Table of Contents
01 The term pitbull has an unfortunate origin.
02 The term pitbull includes several different breeds of dogs.
03 Many people call mixed-breed dogs pitbulls.
04 Pitbulls start out with wrinkled foreheads.
05 Pitbulls have a powerful bite.
06 Pitbulls do not have locking jaws.
07 Pitbulls have violent tendencies.
08 They’re also among the most affectionate pet dogs in the world.
09 It’s best to train pitbulls early.
10 People should only buy pitbulls from certified breeders.
11 People can also just adopt a pitbull from a dog shelter.
12 It’s best to check with the law first before getting a pitbull.
13 Pitbulls need their vaccines.
14 Pitbulls also have serve roles in agriculture.
15 Two former US Presidents owned pitbulls.
16 A pitbull served in the Union Army during the American Civil War.
17 Another pitbull once earned the rank of sergeant in the US Army.
18 Other pitbulls have earned fame in recent history.
19 Pitbulls appear in various logos.
20 They’ve also appeared in Life Magazine.

The term pitbull has an unfortunate origin.

Specifically, the term “pitbull” comes from a bloodthirsty form of entertainment called ratting. People would throw rats and dogs into a pit to fight, betting on which of the animals died the quickest. The ‘pit’ in pitbull comes from the venue used in such a brutal form of sport. This is definitely one of the darker pitbull facts.

Since their similar appearances make it easy to classify hybrids as pitbulls, professional breeders and veterinarians aren’t so quick to refer to crossbreeds as pitbulls. Instead, their verdict depends on how many traits the crossbreeds share. Through DNA analysis, they can determine whether or not the crossbreed really counts as a pitbull.

Pitbulls start out with wrinkled foreheads.

At birth, pitbull puppies have wrinkled foreheads. However, they don’t keep this physical trait, as their foreheads smooth out as they grow older. To this day, science hasn’t been able to explain this phenomenon. How’s that for curious pitbull facts?

Pitbulls have a powerful bite.

With their reputation as fighting dogs, it’s no surprise that pitbulls can deliver a nasty bite. However, their bite still pales in comparison to Rottweilers or German Shepherds. That said, pitbulls still have a reputation for locking onto and shaking their targets. Once provoked, a pitbull may refuse to let go of the animal or person that they’ve bitten.

In worst case scenarios, professionals typically break a small ampule of ammonia near the dog’s nose. The harsh smell of ammonia forces the dog to let go and get away from the source of the smell.

Pitbulls do not have locking jaws.

This is actually a popular myth, but one that has absolutely no basis in fact. When pitbulls bite and don’t let go, it’s not because they can’t let go. It’s because they don’t want to let go. Throughout the animal kingdom, no dog has a locking jaw, despite what popular fiction or the internet says.

As an unfortunate side-effect of the pitbull’s origin, these dogs have innate tendencies to fight other dogs and animals. It’s not unknown for pitbulls to suddenly attack other dogs, animals, or even people without any warning. However, quick intervention from the owner will usually calm the pitbull down surprisingly easily.

They’re also among the most affectionate pet dogs in the world.

No matter how strange it sounds, their fearsome reputation only shadows their affectionate behavior. In fact, professional trainers found that in temperament tests, pitbulls come second only to Golden Retrievers. More interestingly, the tests revealed Chihuahuas as the most violent dog breeds of them all.

Pitbulls may have aggressive tendencies, but teaching them not to fear humans and to avoid attacking other dogs and animals early on can prevent this behavior. If you want to care for a pitbull, it’s best to train them as early as possible to prevent future incidents. Now, there’s one for essential pitbull facts.

People should only buy pitbulls from certified breeders.

Buying pitbulls from certified breeders ensures that the pitbulls won’t have any bad traits that develop from improper breeding. In some cases, breeders may even sell pitbulls trained to fight as pets. With those conditions, it’s more likely for the pitbulls to attack their owners or other people without warning.

People can also just adopt a pitbull from a dog shelter.

Despite what some sources on the internet say, adopted pitbulls from dog shelters aren’t more violent than others. In fact, professionals agree that even abused dogs can learn to get over their fear of humans and eventually warm up to them.

Dog shelters also have standards of their own, and would never allow dogs that haven’t recovered from abuse to be up for adoption.

It’s best to check with the law first before getting a pitbull.

Due to their violent past, some countries prohibit keeping pitbulls to prevent them from being exploited in blood sports as well. If you want to get a pitbull, it’s best to check in with your national and local government for any restrictions or regulations they may have on the breed. Definitely one of the pitbull facts you should remember.

Like all dogs, pitbulls should get vaccines for rabies. However, professionals generally consider distemper and parvovirus as more likely to affect pitbulls in particular. That said, pitbull owners should take extra precautions to ensure that their pets don’t contract these fatal diseases.

Aside from being trained by law enforcement as K9s, pitbulls also have a place on farms. Here, their responsibilities range from guarding livestock, keeping them from wandering away, and also herding them from predators. Professional hunters also use pitbulls to help them track their prey.

Serving as US President from 1901 to 1909, Teddy Roosevelt was the first to bring a pitbull to the White House. A few years later, Woodrow Wilson became the second pitbull owner in the White House, serving from 1913 to 1921.

A pitbull served in the Union Army during the American Civil War.

Born in 1861, Sallie Ann Jarrett served as the mascot for the Union Army’s 11th Pennsylvania Infantry Regiment. She earned her place in history during the Battle of Gettysburg, when Sallie stood guard for days over a group of wounded soldiers cut off from the rest of their forces. She stayed with her regiment in other battles and eventually died in battle from a gunshot during the Battle of Hatcher’s Run.

Her fellow soldiers buried her on the battlefield even before the fighting stopped. When her regiment’s veterans raised a memorial at Gettysburg in 1890, they included a sculpture of Sallie in the monument.

Another pitbull once earned the rank of sergeant in the US Army.

Another pitbull named Stubby served as the mascot for the US Army’s 102nd Infantry Regiment. Born in 1916, Stubby served for 18 months, surviving no less than 17 battles on the Western Front of WWI. In that time, he saved his troops from a chemical attack and even managed to take a German soldier prisoner.

His heroism earned him many awards, including the rank of sergeant. To this day, Sergeant Stubby remains the only military dog to ever earn such a rank. How’s that for historic pitbull facts?

Other pitbulls have earned fame in recent history.

Weela from California saved 32 people and over 30 other animals during the widespread floods in Southern California in 1993. Popsicle, a pitbull serving as a sniffer dog for US Customs, discovered a large number of illegal drugs at the Hidalgo Texas Port of Entry. It later turned out the biggest amount of illegal drugs anyone tried to smuggle into the USA through the town.

The Radio Corporation of America (RCA) used a pitbull on their logo, as did the Brown Shoe Company, now known as Caleres Inc. Similarly, a law firm in Florida tried to use pitbulls on their logo in 2005, but a court order stopped them from doing so.

Throughout history, pitbulls are the only dogs to ever feature on Life Magazine. This was during the 1900s, when Life Magazine featured pitbulls no less than 3 times.