When you hear the word koala, the image of sleepy little bears clinging to trees immediately come to mind. However, there’s more to these eye-catching animals than their love for sleep. Find out more about these unique creatures with these koala facts.

Quick Facts
Essential Facts
Interesting Facts
Table of Contents
01 Koala Facts Infographics
02 The name koala comes from an indigenous word.
03 The koala diet results from its species’ evolution.
04 Indigenous Australians had a clever method to hunt koalas with.
05 Indigenous Australians have some taboos when it comes to hunting koalas.
06 Koalas get their water from eucalyptus leaves.
07 A koala’s diet also has disadvantages of its own.
08 Eucalyptus leaves also offer low nutrition and large amounts of poisonous eucalyptus oil.
09 Koalas are marsupials.
10 Baby koalas spend a few more months with their mother after leaving the pouch.
11 Koalas usually give birth to only 1 joey at a time.
12 Male koalas mark their territory.
13 Female koalas mature sexually faster than males koalas.
14 Female koalas prefer to get pregnant in alternating years.
15 Koalas can live for over a decade.
16 Koalas have few natural predators.
17 Koalas also suffer from parasites.
18 Koalas particularly suffer from Chlamydiaceae bacteria.
19 Koalas have their own version of AIDS.
20 Koalas have always suffered from bushfires.
21 Climate change is a major threat to koalas.
22 The 2020 Australian Bushfires directly affected the koala population.
23 Climate change has another effect on koalas.
24 The koala is the iconic animal of Australia.
25 The koala’s popularity worldwide first soared to its present level after WWII.
26 Many historical figures have taken pictures with koalas.
27 Koalas appear in many Indigenous Australian myths.
28 Tourists shouldn’t let koalas drink from bottles.
29 You can’t keep koalas as pets.
30 Human development threatens the koala.
31 Koala population numbers are somewhat controversial. 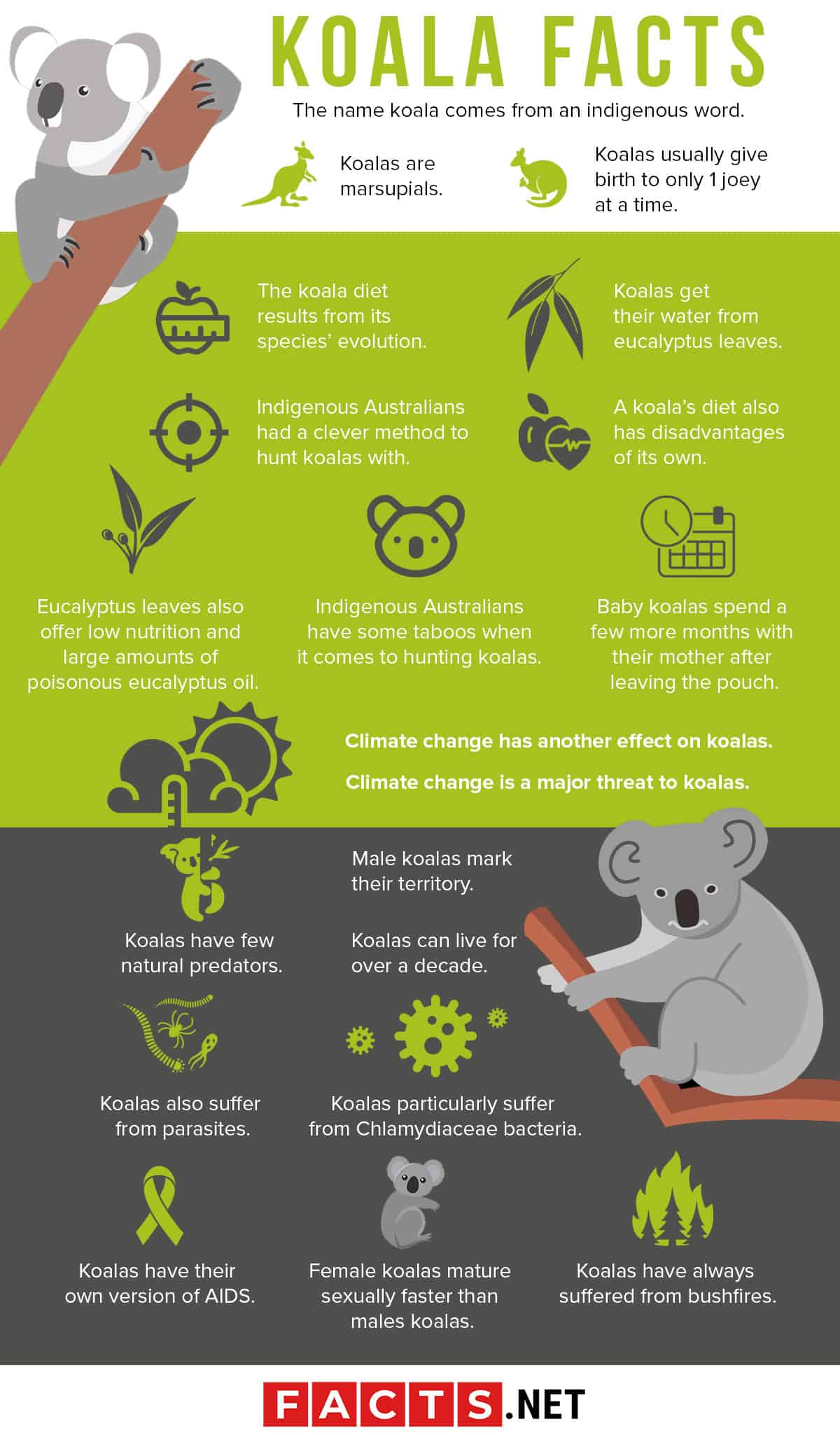 The name koala comes from an indigenous word.

The name koala roots from the word gula from the Dharug language of the Indigenous Australians. The term translates to no water, referencing how koalas rarely drink water.

The koala diet results from its species’ evolution.

Koalas evolved in the dry, semi-arid environment of the Australian outback. Infrequent rains and a lack of deep rivers and other water sources made the species adapt to survive on minimal water.

The koala’s ability to get all or most of the water they need from eating eucalyptus leaves is a direct adaptation to their environment. Another adaptation to their limited access to water is their digestive system’s squeezing out all the water from their waste, which comes out as dry fecal pellets.

Indigenous Australians had a clever method to hunt koalas with.

To hunt koalas, the Indigenous Australians would hang a loop of ropey bark at the end of a stick onto a tree, which they use to pull the koala down to the ground. The koala would then be killed with an ax or a club.

Indigenous Australians have some taboos when it comes to hunting koalas.

Some tribes consider it taboo to skin a koala. Another taboo is to bring a koala’s head with you. Instead, they remove the koala’s head and give it a proper burial. The rest of the body is then taken away by the hunters.

Koalas get their water from eucalyptus leaves.

With all the time koalas spend sleeping in trees, you’d wonder how they stay hydrated. However, koalas do occasionally come down for a drink. In the case of females, this is only when they can’t get enough eucalyptus leaves to eat.

On average, koalas eat up to 400 grams of eucalyptus leaves in a day, which is usually enough to supply them with all the water they need. However, males need more water. Thus, male koalas can actually be seen drinking from clean groundwater sources.

A koala’s diet also has disadvantages of its own.

Eucalyptus leaves may be the main source of koalas’ daily needs, but they also pose challenges that koalas had to adapt to. One of those is eucalyptus leaves’ naturally high fiber content. As a result, the koala’s teeth evolved to be specially-designed to crush and break eucalyptus leaves as much as possible to digest them properly.

Koalas are also known to regurgitate their stomach contents to chew them a second time. Koalas also developed a very specialized digestive system which can take up to 100 or even 200 hours to process a koala’s food. This allows the koala to break down as much of the eucalyptus fibers as possible.

The koalas adapted to the eucalyptus’ low nutrition through developing a slow metabolism. Specifically, their metabolism is 50% lower compared to other mammals of the same size. This is also why koalas spend so much time asleep.

They share this distinction with other Australian mammals like kangaroos and wallabies. Like all mammals, they give birth to live young – but unlike other mammals, young marsupials need to spend more time after getting born in their mother’s pouch.

There, they nurse their mother’s milk for food and go around with their mother wherever they go. Koalas are born only after month-long pregnancy. From there, joeys will spend another 6 to 7 months in their mother’s pouch.

Baby koalas spend a few more months with their mother after leaving the pouch.

Baby koalas typically spend another 5 to 6 months with their mothers, carried around on their mothers’ backs. Usually, female koalas turn aggressive towards their young year after they’re born, forcing them to leave and fend for themselves. Definitely one of the harsher koala facts.

Koalas usually give birth to only 1 joey at a time.

However, scientists have also observed koalas giving birth to twins. That said, twin births among koalas are very rare.

They have 2 ways of doing this. Male koalas exhibit the unique behavior of rubbing their chest against a tree, leaving his scent through an organ in his chest. The second method, of course, is a koala urinating on the tree to mark it as his territory.

Female koalas can get pregnant as early as the age of 3. In contrast, male koalas aren’t able to breed until they’re 4 years old.

Female koalas prefer to get pregnant in alternating years.

That said, they’re able to get pregnant once a year. Female koalas also known to get pregnant without following the alternating year rule that scientists have usually observed. Scientists believe that a koala chooses to get pregnant depending on other factors, such as the availability of food.

Koalas can live for over a decade.

A koala’s average lifespan is between 13 to 18 years. The primary cause of death is actually starvation usually caused when koalas lost the ability to chew. This is unfortunately thanks to their diet of eucalyptus leaves. Despite their teeth specifically-evolving to handle strong eucalyptus fibers, they still wear and break away from the effort over time.

Scientists observe such dental degradation in koalas as young as 6 years old, and which continue until such time as a koala’s teeth completely collapse. Unable to eat afterward, such toothless koalas then starve to death.

Dingos and pythons are the predators that most commonly prey on koalas. Birds of prey like eagles or even owls also prey on koalas, but rarely on adults. Instead, they prefer joeys.

In coastal areas, ticks are common for koalas. Mites also cause mange in koalas, though this is rare. Koalas may also suffer from skin ulcers caused by certain bacterial infections. They’re also known to suffer from tapeworms and nematodes, though such parasitic infections tend to go asymptomatic.

Koalas have their own version of AIDS.

It’s even called the Koala Immune-Deficiency Syndrome (KIDS), caused by the koala retrovirus (KoRV). Though its origin is currently unknown, KIDS has completely infected northern koala populations and is steadily spreading to the southern population. Definitely one of the more concerning koala facts.

Koalas have always suffered from bushfires.

Bushfires are a fairly common occurrence in the Australian outback, between the hot and dry climate, and the availability of fuel in the form of dry and dead plant life. For koalas, it’s made even worse by the flammability of eucalyptus oil, found in large amounts in eucalyptus leaves.

Since koalas tend to live among the leaves and branches of eucalyptus trees, they become more vulnerable to the hazards of a bushfire. What makes it worse is that koalas don’t usually run in the face of a bushfire. Instead, their first instinct is to go higher up the tree, either dying when the tree collapses from the fire or succumbing to the smoke.

Climate change is a major threat to koalas.

The increasing heat of the Australian outback as a result of climate change is especially of concern. In particular, higher temperatures cause eucalyptus trees to produce fewer leaves or to shed them all, in order to conserve water. This, however, robs koalas of not just food, but also water. One particular example was in 1980, during a drought in Queensland that caused eucalyptus trees to shed their leaves. This, in turn, caused 68% of the koala population in the area to die.

Climate change has another effect on koalas.

Specifically, the higher carbon dioxide levels in the air that cause climate change have another effect on the koalas. A high carbon dioxide environment causes eucalyptus trees to produce less protein while increasing tannin content. Overall, this reduces the eucalyptus leaves’ already low nutritional value to drop even lower.

The koala is the iconic animal of Australia.

So much so, that 75% of all tourists from Europe and Japan go to Australia specifically to see the koala. Experts consider the koala’s small body and teddy bear-like face as the primary factors for the koala’s popularity.

The koala’s popularity worldwide first soared to its present level after WWII.

This started with a photo taken by Prince Henry, Duke of Gloucester, with a koala in 1934. As tourism soared after the war’s end, many koalas got sent to zoos around the world, further boosting the animal’s profile and with it its popularity.

Many historical figures have taken pictures with koalas.

Among the famous personalities that had photo opps with koalas were Queen Elizabeth II, Emperor Naruhito, Pope John Paul II, and Soviet Premier Mikhail Gorbachev. More recently, even Presidents Bill Clinton and Vladimir Putin have been photographed with the cuddly marrsupials. How’s that for neat koala facts?

For the Tharawal people, koalas rowed the boats that brought them to Australia long ago. Another myth claims that koala intestines made up the bridges that allowed people to reach Australia. The Bidjara people also believe that koalas have the power to turn dry land into a lush forest.

Nursing a koala through bottles risks water droplets entering their lungs, which may cause pneumonia. Instead, tourists should give water to koalas using bowls, cups, and other similar means to let the koalas lap it up on their own. Definitely one of the koala facts to keep in mind if you want to see one yourself.

You can’t keep koalas as pets.

Currently, no country in the world allows people to keep koalas as pets. Even veterinarians must return sick koalas to the wild once they’ve recovered. Abandoned joeys can also only stay in human custody until they become adults. Afterward, they must also return to the wild.

Like most elements of nature, urbanization and industrialization directly threatens the koala. For one thing, it takes away their habitats and food. For another thing, it brings them into direct contact with humans and domesticated animals. Dog attacks and car accidents together kill an estimated 4,000 koalas a year.