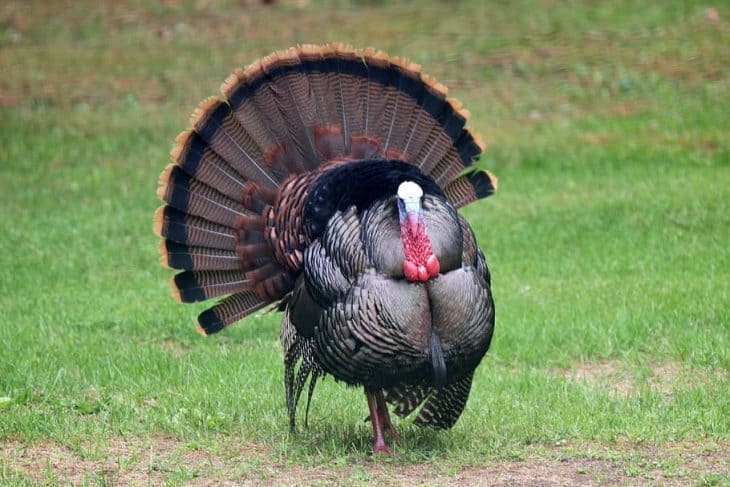 There are several fascinating facts about turkeys that you probably haven’t heard of until you’ve come across this page. This popular creature is a staple in every Thanksgiving dinner along with the stuffing, gravy, green beans, and of course, mashed potatoes. But this native North American bird shouldn’t just be credited as a holiday centerpiece. The turkey’s long lifespan actually makes them great animal companions. And even though they gobble and screech, they are also incredibly docile and friendly, which makes them great pets around children. Not only that, there are even ancient legends depicting a god taking the form of this amazing bird. To learn more, here are 40 facts about turkeys to get you stuffed.

Table of Contents
01 Wild turkeys can fly.
02 Domestic turkeys can't fly, however.
03 The wild turkey diet includes small reptiles.
04 Gobblers attract hens by spreading their tail feathers.
05 There are "beardless" gobblers too.
06 A turkey has two stomachs.
07 They attack when provoked.
08 Each turkey has a unique voice.
09 The bird was named after the country, not the other way around.
10 The Greek goddess Artemis inspired the bird's scientific name.
11 Jade Turkey was an Ancient Mexican god.
12 Turkeys nearly went extinct in the early 1900s.
13 The pilgrims brought turkeys to North America.
14 Benjamin Franklin preferred Turkeys over Bald Eagles as America's symbol.
15 Abraham Lincoln began the "pardoning of the turkey" tradition.
16 It's not the Thanksgiving turkeys that make us sleepy.
17 Jumbo Turkey Legs are a popular Disney Park staple.
18 Wild Turkey is a popular American bourbon brand.
19 The National Wild Turkey Federation believes in the conservation of wild turkeys.
20 Turkeys make great affectionate pets.

With a wingspan of 1.25 to 1.44 meters, turkeys can fly for no more than 100 yards and with a speed of 55 miles per hour. That’s twice more than the distance a chicken could fly! This ability allows wild turkeys to reach low tree branches where they perch to and sleep on.

These birds are much bigger and meatier than their wild cousins. Though larger breasts make a turkey stronger, it’s not the same case with the domestic turkey. They weigh heavier, which will make them unable to fly. Unfortunately, their size makes it difficult for them to walk, too.

Eat or be eaten, as the saying goes. It’s a little hard to believe that the Thanksgiving staple can be a predator too. Sure, they eat seeds, grains, acorns, nuts, berries, and foliage. But imagine these wild birds eating lizards, snakes, snails, slugs, and even worms! Breeders shared that wild turkeys should not be fed artificial feeders as domestic turkeys do, since it will make gobblers territorial and aggressive.

Male peacocks are not the only ones good at showing off their colorful tail feathers. A gobbler is just as good at brandishing theirs too! During the mating season, gobblers strut their tail feathers and sometimes fight each other to decide which bird is the most dominant male in the flock. Afterward, the interested hen may approach and the mating begins.

There are "beardless" gobblers too.

Gobbler beards are a wonder by themselves too. Their beard length, for instance, can help determine the age of a gobbler. In fact, a one-year-old gobbler’s beard is less than five inches long. Surprisingly, some gobblers even sport more than one beard! On rare occasions, beards are nowhere to be found. According to the National Wild Turkey Federation, the chances of encountering a beardless gobbler is less than one percent.

A turkey has two stomachs.

They may not have teeth, but that doesn’t stop these birds from eating more than they could. A turkey can handle so much food as they have two stomachs! The proventriculus helps store the food before mixing it with digestive enzyme, and before moving it to the gizzard which crushes the food using the earlier digested stones and grains.

They attack when provoked.

Turkeys know how to make a statement even if it’s not Thanksgiving. There have been several reports of turkey attacks around America. A columnist reported in November 2014 that a turkey blocked her driveway. Meanwhile, in 2016, a New Jersey resident was visited by “gangster turkeys” during dinner. The University of California named the turkey Hank Hatebeak because it liked pecking at car tires.

Each turkey has a unique voice.

When teaching animal sounds to children, “gobble gobble” is the usual choice for turkey. But ever noticed how it’s only the male turkeys that make the sound? Each turkey, whether a gobbler or a hen, makes a unique sound that only they can understand. According to the Cornell Lab of Ornithology, turkeys can cackle, yelp, and purr, while the poults whistle to call attention!

The bird was named after the country, not the other way around.

It’s as confusing as the age-old question of who came first: the bird or the egg. Several historical accounts of the country Turkey has existed for the longest time, even before the bird. According to lexicographer Orin Hargraves, there was also a case of mistaken identity between two birds. He explained that the “Europeans saw an American turkey, thought that it was the [African] guinea fowl which at that time was called the ‘turkey cock,’ and so gave it the same name.”

Out of the six animals under Artemis’ symbols, the story of the guinea fowl is one of the saddest. The Greek gods are known for their vengeful nature. Artemis didn’t take King Oeneus’ disrespect kindly when he didn’t honor the moon goddess after he made an offering to the gods. She was so angry, she sent a boar to destroy Calydon. Meleager, the king’s son, led the hunt and won. Accounts mentioned that his mother, Althaea, was so angry about the death of her brother that she stole a piece of wood entwined with her son’s lifespan and burned it, therefore causing his death. Artemis felt sorry for his sisters, the Meleagrides, that she turned them to guinea fowls.

The scientific name Meleagris gallopavo, was inspired by the Greek myth, and the Latin words gallus (rooster) and pavo (peacock).

Birds are a huge part of any mythology. The Greek god Zeus transforming into a swan, the bird-headed Egyptian god-king Horus, and Norse god Odin’s messenger ravens are all from myths that most of us heard. The Aztecs also had the god of disease and plague, Chalchiuhtotolin, which is undoubtedly based on a turkey. The creator god Tezcatlipoca, on the other hand, takes one of the forms known as Jade Turkey. Ancient drawings depicted him with green feathers and silver talons, a sign that he was an evil god.

Excessive animal hunting has always been a wildlife problem. According to Cool Green Science, the wild turkey population in North America had been reduced to 30,000 in the early 1900s. Conservationists created “protected areas” and “started a movement to pass game laws and enforced them.” As of 2017, the turkey population grew to 7 million!

The fourth Thursday of November is one of America’s biggest annual holidays, next to the Fourth of July, obviously. Thanksgiving celebrations began when Pilgrim and Puritan settlers arrived on North American shores in the early 1620s to 1630s. There were no clear accounts of whether the Pilgrims ate roasted turkey, just that it was wildfowl native to the area. Fast forward to the 19th century, turkey became a popular holiday centerpiece.

He’s the Founding Father always pictured with a key and a kite. Benjamin Franklin had unique views during the American Enlightenment, but his opinion over America’s symbol takes the cake. Though he used the bird during his experiments with electricity, he agreed that the turkey is “a bird of courage”. He thought of the Bald Eagle as “a bird of bad moral character”.

Abraham Lincoln began the "pardoning of the turkey" tradition.

A video of the 44th U.S. President Barack Obama pardoning turkeys always makes rounds during Thanksgiving. From the witty turkey names to his hilarious speeches, this White House tradition is always something to look forward to. The tradition began when the son of the 16th U.S. President Abraham Lincoln “instructed the White House to save a bird given to the president” as his son “had grown fond of the bird”. Historians revealed that even the 35th U.S. President John F. Kennedy also pardoned the turkey given to him. But it was only in 1989 that 41st U.S. President George H.W. Bush made the tradition official.

It's not the Thanksgiving turkeys that make us sleepy.

Ever felt sleepy after a third helping of turkey and gravy? It’s a common misconception every year that too much turkey can make a person drowsy. It’s not. On average, a person eats over 3,000 calories during Thanksgiving dinner. Though turkey contains tryptophan, the amino acid that contributes to growth and sleepiness, it’s due to one’s metabolism overworking itself. It’s definitely not the turkeys themselves that make us feel tired after dinner.

Mickey Mouse-shaped snacks are a novelty in any Disney Park, but this monstrosity is bigger than the usual chicken drumstick. The cured and smoked jumbo turkey leg weighs a whopping 1.5 lbs! YouTube channel Midway to Main Street mentioned that the turkey legs came from the much larger gobblers. According to Delish, this Disney Park must-have was sold at only one food cart in the late 1980s.

James and John Ripy opened the family distillery on Wild Turkey Hill in Kentucky in 1869, but it wasn’t until 1940 that Austin Nichols executive Thomas McCarthy took home samples and the brand took off. The company website claimed it was named the Wild Turkey Bourbon brand “after a distillery executive shared his bourbon with friends on an annual hunting trip — of course, they were after wild turkey”.

The National Wild Turkey Federation believes in the conservation of wild turkeys.

They are the organization responsible for the repopulation of wild turkeys in North America. At the time the National Wild Turkey Federation was founded in 1973, there were only 1.3 million wild turkeys across the United States. Their decades-long efforts made it possible to increase the numbers to almost 7 million! The Federation believes in wildlife habitat conservation as well as minimizing wild turkey hunts. NWTF Northeast conservation field supervisor Doug Little says this “is vital to wildlife habitat conservation.”

Parrots and parakeets are quite common pets, but not a lot of people keep turkeys. Though turkeys can be noisy, they are also friendly, sociable, and quirky. Kaylee Vaughn of Community Chickens says “most turkeys are generally docile, making them a good animal to be around children”. 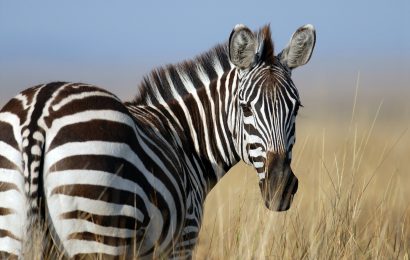 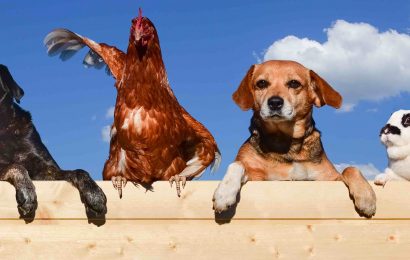