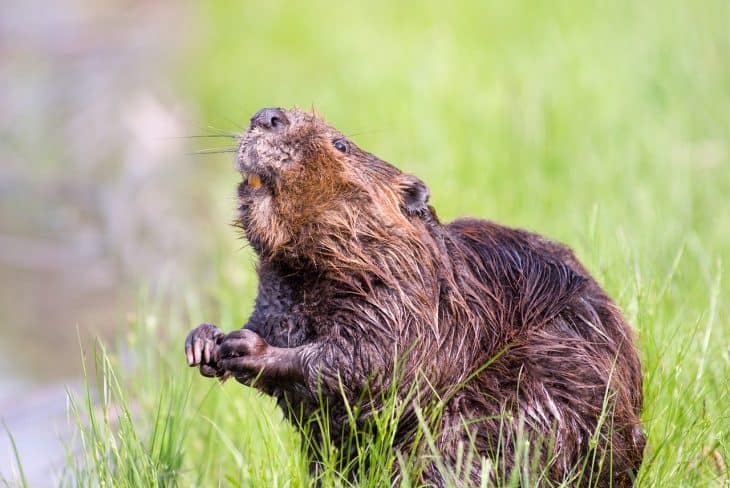 Beavers are considered keystone species that engineer their environment to build dams and colonies. This balance in the ecosystem affects not only benefits a beaver, but also other living organisms. Wetlands created from beavers’ activities are home to more than a thousand organisms. Beavers truly are hardworking and worthy of our praise. If you are intrigued, then here are some beaver facts that you might want to read up on if you want to know more about the friendly tree chompers.

Table of Contents
01 The heaviest beaver ever recorded was 110 pounds.
02 Its tail has a lot of purposes.
03 They store fat on their tail.
04 Beavers are Canada's national symbol.
05 They can stay for a long time underwater.
06 They are great swimmers.
07 Beavers are nocturnal animals.
08 Beavers are hardcore chewers.
09 Beavers have orange teeth.
10 A beaver's butt smells like vanilla.
11 You couldn't bully a beaver during the Ice Age.
12 Beavers made their appearance in an awesome movie.
13 Newborn beavers are already quite active.
14 Beavers are not safe from predators.
15 Man poses as the biggest threat.
16 Beavers are geniuses.
17 The biggest beaver dam is visible from space.
18 The beaver wetlands has a positive impact on our land.
19 We can celebrate Beavers Day, but when?
20 They are very busy because of winter.

The heaviest beaver ever recorded was 110 pounds. 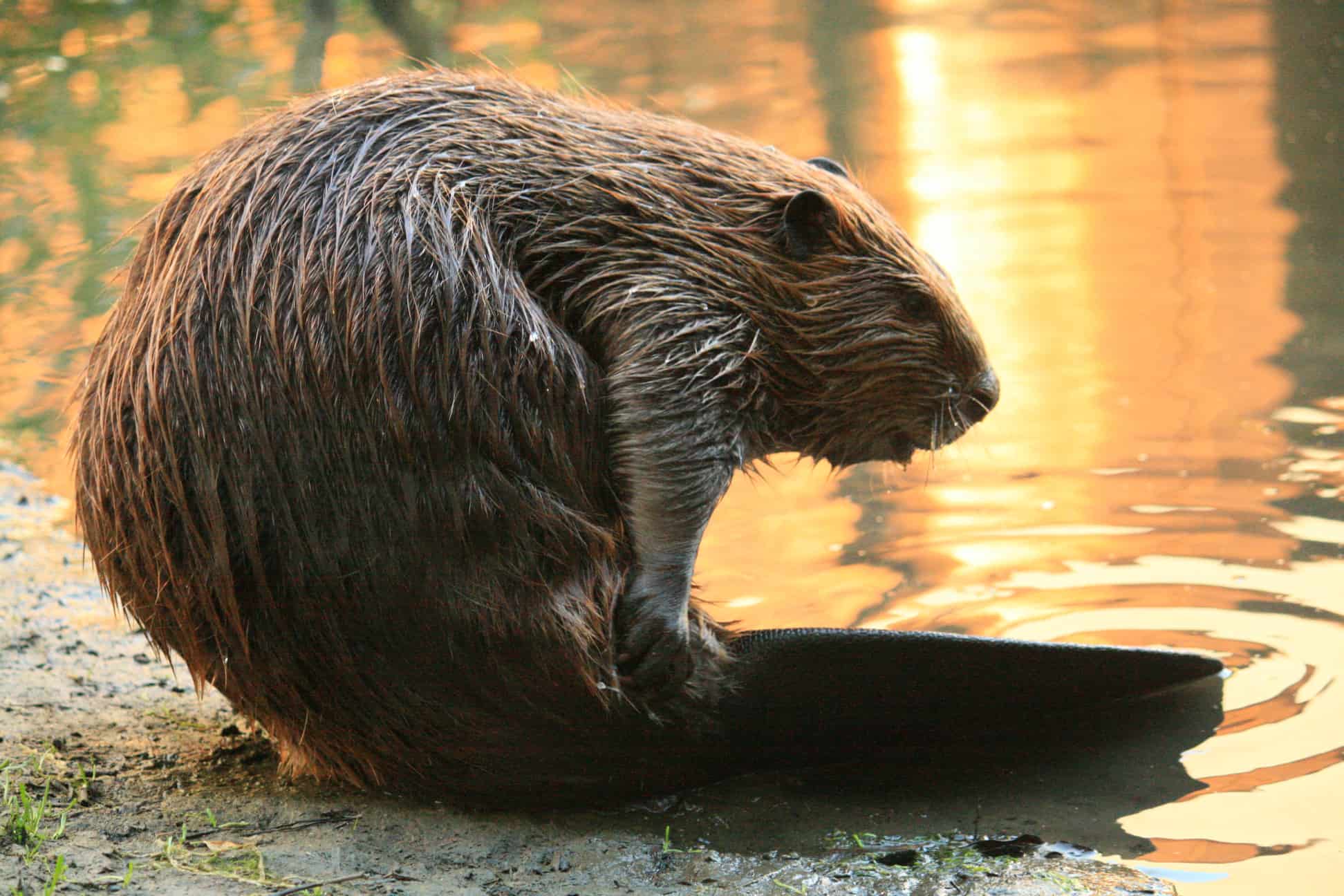 Its tail has a lot of purposes.

The beaver’s most notable feature is its large flat tail. Its tail can serve as a rudder when swimming and it also assists them when sitting or standing upright. Moreover, beavers may strike their tail on the surface of the water if it senses danger which can also serve as a warning to their fellow animals, or sometimes just for fun.

They store fat on their tail.

Beavers don’t hibernate during winter and usually stay in one place where they have stored enough food to last until spring. The beaver’s tail also serves as fat storage which helps them survive — their tail is almost entirely fat, with a few connective tissues.

Canadians selected the beaver as their national symbol, not because of its similarity to this ecological engineer, but mainly because of its fur. The fur trade has helped Canada become what it is today. Beavers’ fur was highly coveted as hats and winter coats.

They can stay for a long time underwater.

Beavers can hold their breath for about 15 minutes underwater. They also have transparent eyelids that serve as their goggles, helping them navigate the water effortlessly. Beavers have adapted so many things as semi-aquatic mammals that their eyes and nose valves would shut to keep water out when they swim.

They are great swimmers.

Beavers can look funny while on land, but their average speed in the water can go up to five miles per hour. This is because of the body structure that helps them maneuver and swim faster. In addition, their fur is naturally oily and waterproof, which helps them keep dry and warm even when submerged for a very long time. 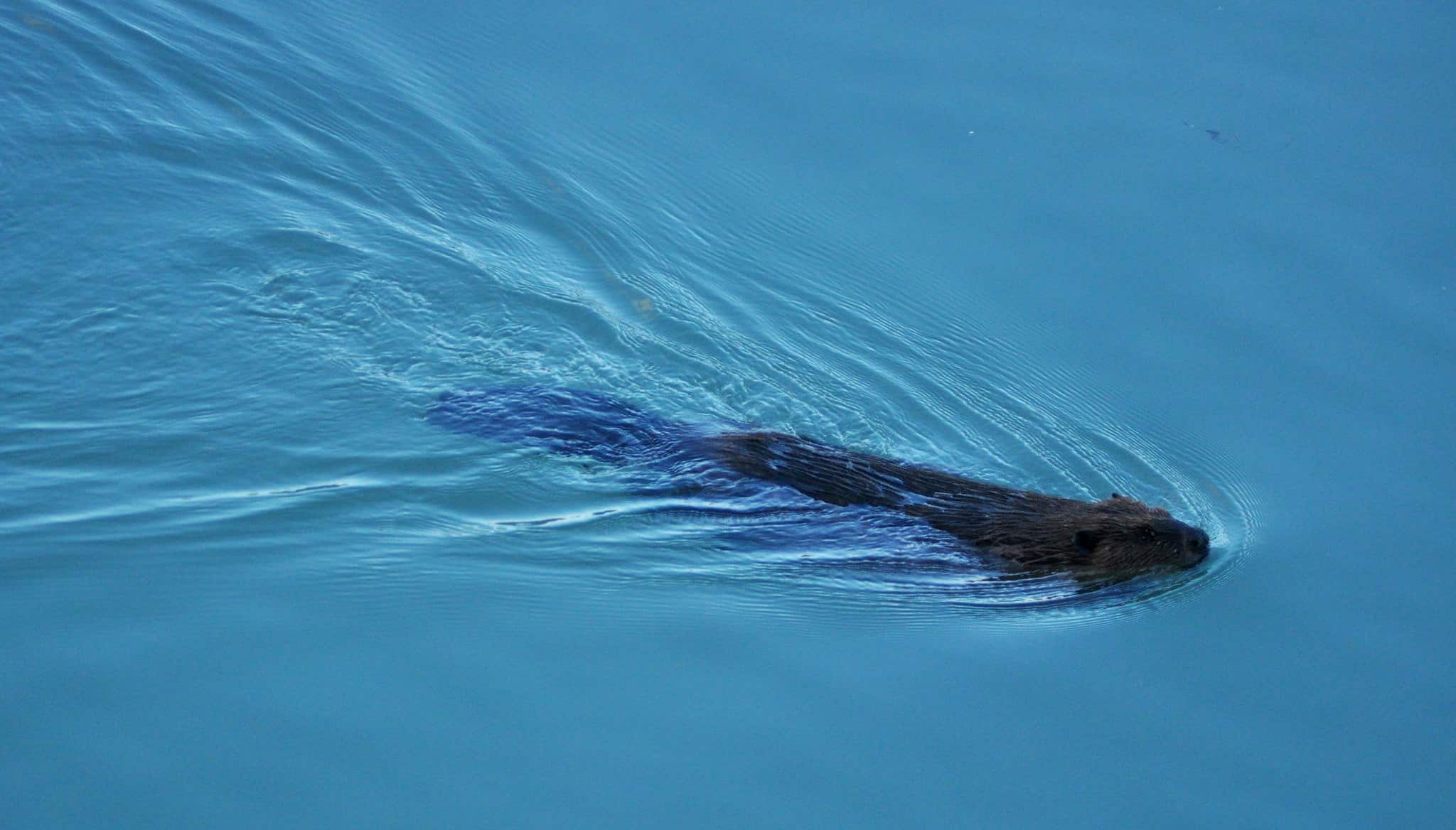 These creatures are super active at night and would be very busy for about 12 hours building and maintaining their territory. Despite their less-developed eyesight, they have keen senses of smell and hearing that would help them carry out their nightly activities.

They do have a peculiar set of teeth. Their frontal teeth stick out of their lips which looks goofy but don’t let it fool you because a beaver’s teeth can chew up an eight-foot tree within five minutes. Their teeth are so strong that they can cut through trees, shrubs, and branches that they then drag to add as a foundation to their nests and dams. A beaver’s incisors continue to grow throughout their life, but worry not because their daily utilization of their teeth prevents overgrowth from happening.

A beaver’s teeth get this color from an iron-rich protective coating of enamel that helps prevent tooth decay. Enamel is a thin outer covering of the tooth but unlike human teeth, with which enamel contains magnesium, beaver enamel on the other hand contains iron which helps strengthen it. 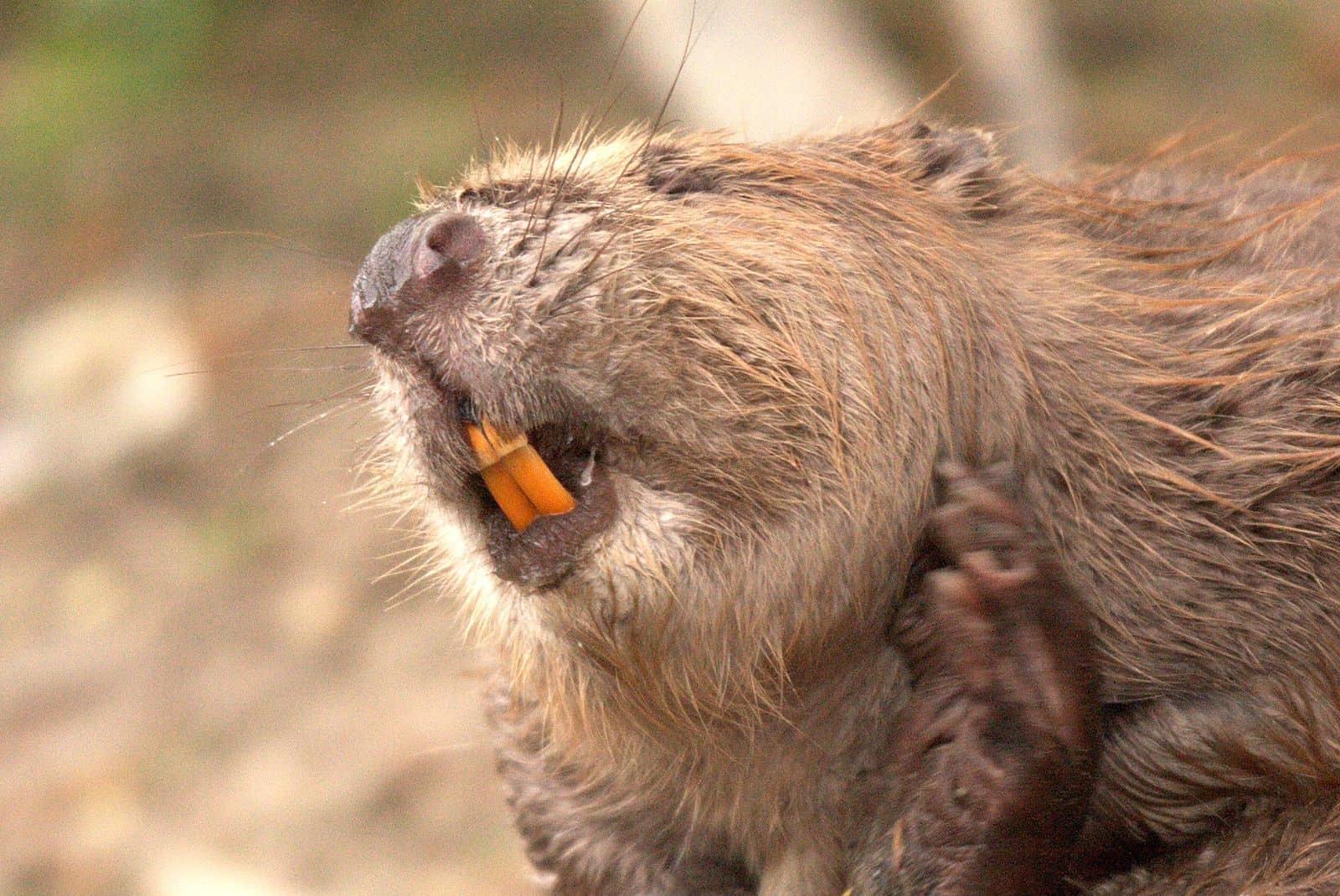 Shocking as it is, beavers secrete a chemical called Castoreum from their castor sacs, which are located under their tails. This chemical smells like musky vanilla with a texture of molasses. In addition, the FDA has approved this as a natural flavoring.

You couldn't bully a beaver during the Ice Age.

Giant beavers of the Ice Age, known as Castoroides looked exactly the same as their modern relative but so much bigger. These bear-sized beavers lived in North America during Ice Age and weights about 90 kg (198 lb) to 125 kg (276 lb). Their fossils were first found in 1937 in a peat bog in Ohio. 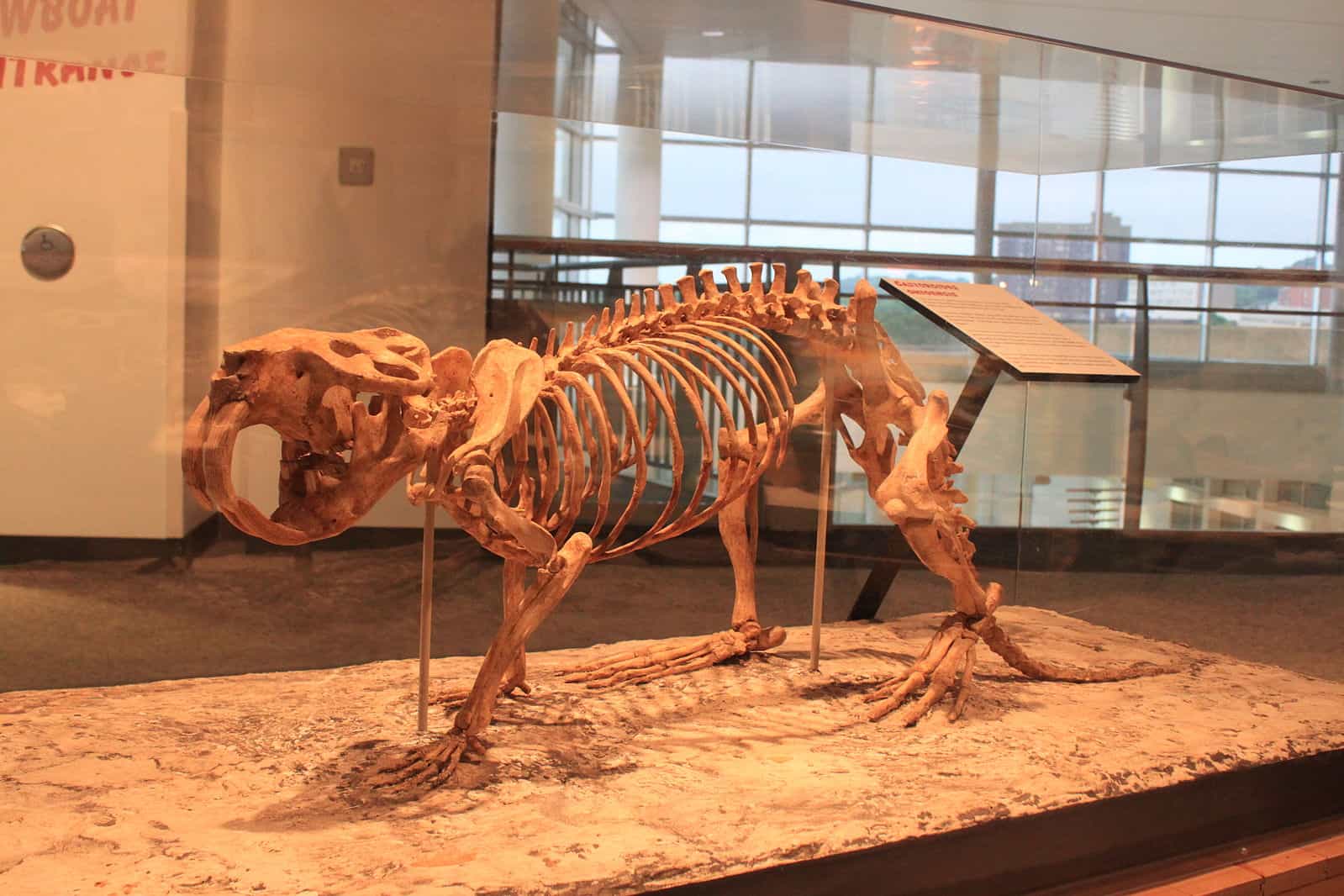 Beavers made their appearance in an awesome movie.

Beavers rarely take part on the big screen, but there is one movie that surprisingly provided beaver characters a huge impact. In The Lion, the Witch, and the Wardrobe, Mr. and Mrs. Beaver were beavers who helped the Pevensie children in their adventure to save Narnia from the curse of the White Witch.

Newborn beavers are already quite active.

Baby beavers are called kits. They are born highly developed physically. They can open their eyes immediately and are already covered with fur. Surprisingly, these kits can swim right after they are born, but as time goes by, they would need guidance from adults to learn how to do other things, like foraging for food inland or in the water. Kits live with their family and siblings for years before leaving to start their own family.

Beavers are not safe from predators.

The food chain does not exempt beavers to be chow by other animals. The most common beaver predators are coyotes, foxes, bobcats, otters, and green-horned owls. Beavers are sometimes able to fend off these predators, but the most effective protection is their elaborate shelters and being close by to a body of water.

Man poses as the biggest threat.

Modernization has taken a toll on the habitat of most animals, and beavers are one of the many living organisms that are being affected by man’s mishandling of things, such as deforestation and pollution. As a result, beavers and other animals are losing their natural habitats. This would later end up in endangerment or extinction.

Beavers are often called ecological engineers. They are one of the few animals that can manipulate their surroundings to create a suitable habitat but that isn’t the only reason why they are considered ecological engineers —the dams they build create wetlands which are essential habitats for thousands of species. Beavers are considered keystone species, in other words, they are critical for the health of the environment.

The biggest beaver dam is visible from space.

The dam sits in a remote area of Wood Buffalo National Park in northern Alberta, Canada. It was discovered when Jean Thie, a Canadian ecologist was using Google Earth and NASA satellite images to determine how quickly the permafrost is melting, but to his surprise, he found space images of what seemed to be a structure that can be recognized as a dam.

The beaver wetlands has a positive impact on our land.

As beavers build their dams for protection, wetlands would usually be created. These sponge up floodwaters, alleviate drought, lessen erosion, and act as the earth’s kidneys that purify water. Wetlands also prevent wildfires from spreading, as well as serving as a reservoir for animals who need water to survive. 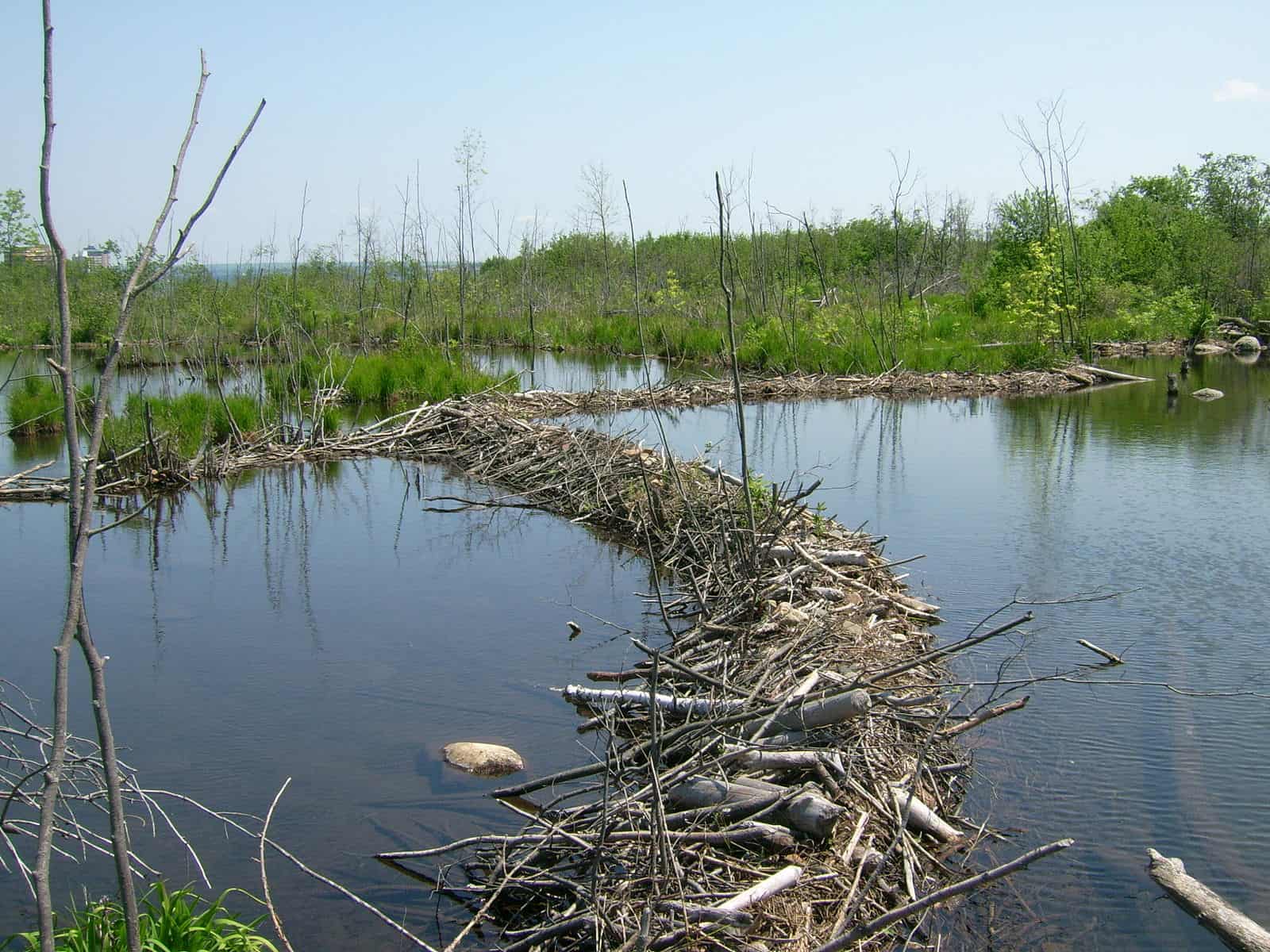 We can celebrate Beavers Day, but when?

Apparently, International Beavers Day is celebrated every 7th of April. It aims to raise awareness about the beavers’ ecological importance. People celebrate this day by going up hiking and spending time observing how these ecological engineers do their thing in the wild.

They are very busy because of winter.

Beavers do not hibernate, so they need to store food as much as possible in order to survive the long nights of the chilling cold. During winter, food is scarce and the snow makes it harder for beavers to move outside, so every fall, the members of the colony start to store food. In relation to this, building dams and preparing for winter is where the idiom “busy as a beaver” comes from. 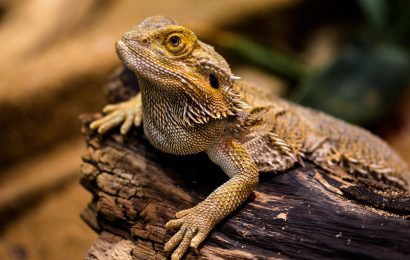