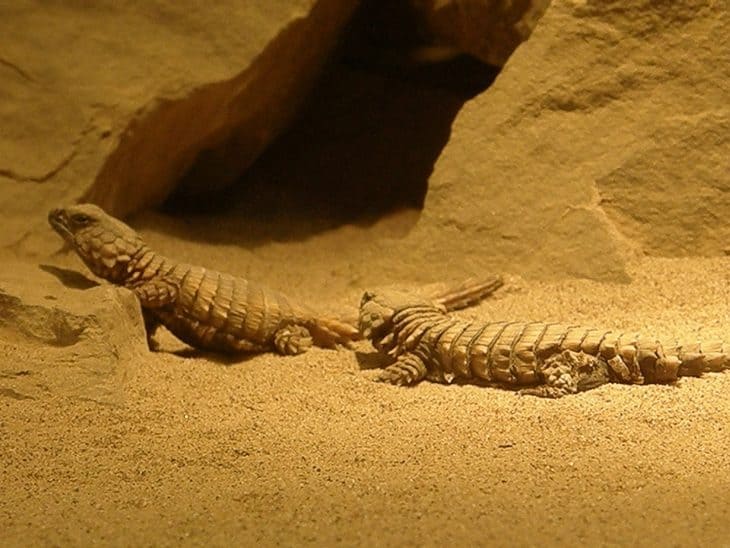 Named after bigger armored mammals, the armadillo lizard is a unique species of its own. Native to South Africa, people have compared these lizards to the Greek ouroboros for its defensive stance. However, they hold many other wonders behind their armor. Find out more about these rare animals with these armadillo lizard facts.

Armadillo lizards aren’t related in any way to armadillos

Despite what their names may suggest, these lizards have nothing to do with armadillos. For one thing, the lizards are reptiles – a completely different class of life compared to armadillos. In contrast, armadillos belong to the class of mammals, just like humans do. The only similarity between the two lies in the hard armor covering their bodies as well as their defensive stance.

This armor serves as their main protection from predators, changing in color from one part of their body to another. On their upper bodies, armadillo lizard’s armor end to have shades of brown, while the scales on the lower body usually have yellow tones.

The scales on the lizards’ lips have a brown color, while those on their chins have black splotches. Scientists believe that this color scheme works as camouflage for the lizards,  helping them blend into their environment.

With termites as their staple food, armadillo lizards prefer meat. In fact, these lizards travel as far as 60 meters just to break into a termite nest and eat the insects inside. While 60 meters might not mean much to us humans, that’s quite the distance for smaller animals. In addition to termites, they also eat spiders and other insects. Scientists have also seen these lizards eat leaves from low bushes and shrubs.

Their armored scales and hardened spines tend to make most other animals avoid them. However, birds of prey like falcons and eagles can still hunt them perfectly fine. In fact, birds of prey make up the natural predators of the armadillo lizard.

Armadillo lizards curl up into a ball to protect themselves from danger.

To reinforce this stance, armadillo lizards stick their tails into their mouths and bite down. This lets them present armored scales and hardened spines in all directions they might get attacked from. They can even spend hours in such a state until they’re sure that all danger has come and gone.

Interestingly, in such a state, they also resemble the ouroboros, a mythical serpent that eats its own tail. In alchemy and magic, the ouroboros symbolizes cycles, infinity, and the circle of life and death.

They live in large groups, typically formed of around 30 animals to 60 animals. This also allows the lizards to take advantage of strength in numbers. In these groups, seeing these animals curl up  is definitely a sight to behold.

Armadillo lizards mate in the spring.

Although they like being in groups, most armadillo lizards don’t go far to find mates. In fact, males can get territorial when it gets to mating, chasing away any males from other groups that come too close. That said, the lizards don’t have fixed mating pairs, with anyone free to mate each season.

For one, the planet’s rising temperatures can cause bigger wildfires, making it more difficult to control. This naturally poses a direct threat to the lizards, as they will burn to death in a wildfire. Invasive plant species can also upset their food supply, as they find themselves having to eat plant life they haven’t adapted to.

In South Africa, it’s illegal to keep armadillo lizards as pets. However, that isn’t the case in countries overseas. For the ideal tank, professionals recommend at least 20 gallons of empty space inside, with a screen top to allow air to move freely. Temperatures also need to keep within 29 to 49°C to keep the lizards in the tank comfortable. Ample water should also be available, replaced daily to keep it clean. An armadillo lizard’s diet in captivity typically includes crickets and worms.