It is impossible to learn about Chinese philosophers and not, at least once, aspire to acquire even an inkling of their wisdom. Many of the famous sayings and beliefs that the majority abides by today originated from these notable people. Regardless of the fact that their lifetimes began and ended centuries before your birth, their teachings still remain to educate people of today.

One of them is Confucius, an influential philosopher, and politician. You might even be applying some of his doctrines without you knowing! Find out more when you dive into these important Confucius facts.

Quick Facts
Essential Facts
Interesting Facts
Table of Contents
01 Confucius Facts Infographics
02 Kong Fuzi, or as known as Confucius, was born into a poor yet noble family.
03 Confucius’ mother single-handedly raised him.
04 At age 19, Confucius got married.
05 China’s Kong family holds the record for the longest existing ancestry in the world.
06 Confucius has approximately 3 million descendants.
07 One of Kong Fuzi’s descendants rose as a significant figure in the Republic of China.
08 Confucius did not have any surviving image, picture, painting or sculpture during his lifetime.
09 Confucius had a different career start from what he is known for now.
10 Confucius’ career took a political turn in 501 BC.
11 The nation’s state of affairs disappointed Confucius.
12 One of the problems that Confucius’ political career caused him was the enemies that he made.
13 By the time he reached age 71 or 72, Confucius suffered emotional exhaustion.
14 The number of students whom Confucius taught reached above 3000.
15 Contrary to popular belief, Confucianism is not much of a religion.
16 Unlike what the name suggests, Confucianism was not founded by Confucius.
17 The Confucianism symbol consists of 4 main symbols with different representations from Confucianism beliefs.
18 Confucius’s teachings influence people to exist harmoniously with the “Way of Heaven.”
19 Confucianism beliefs have 6 main pillars.
20 The major Confucianism practices are divided into birth, marriage, and death.
21 The second division of Confucianism practices focuses on marriage.
22 Confucianism practices for death begin with family members crying aloud to announce the tragic news to neighbors.
23 Confucianism spread to other countries over the course of 2500 years.
24 Confucius differed from monotheistic religion prophets in a way that he did not preach personal human redemption theology.
25 Confucianism was not women-friendly.
26 The Chinese communists composed the biggest group that opposed Confucian teachings.
27 Confucianism was birthed into the ‘Hundred School of Thought’ period.
28 One of the many Confucianism temples in China was hailed as a UNESCO World Heritage Site.
29 Confucianism has reached the Europeans in the 17th century.
30 Confucius was not a fan of democracy.
31 The oldest Confucius painting resurfaced from a Chinese ruler’s tomb. 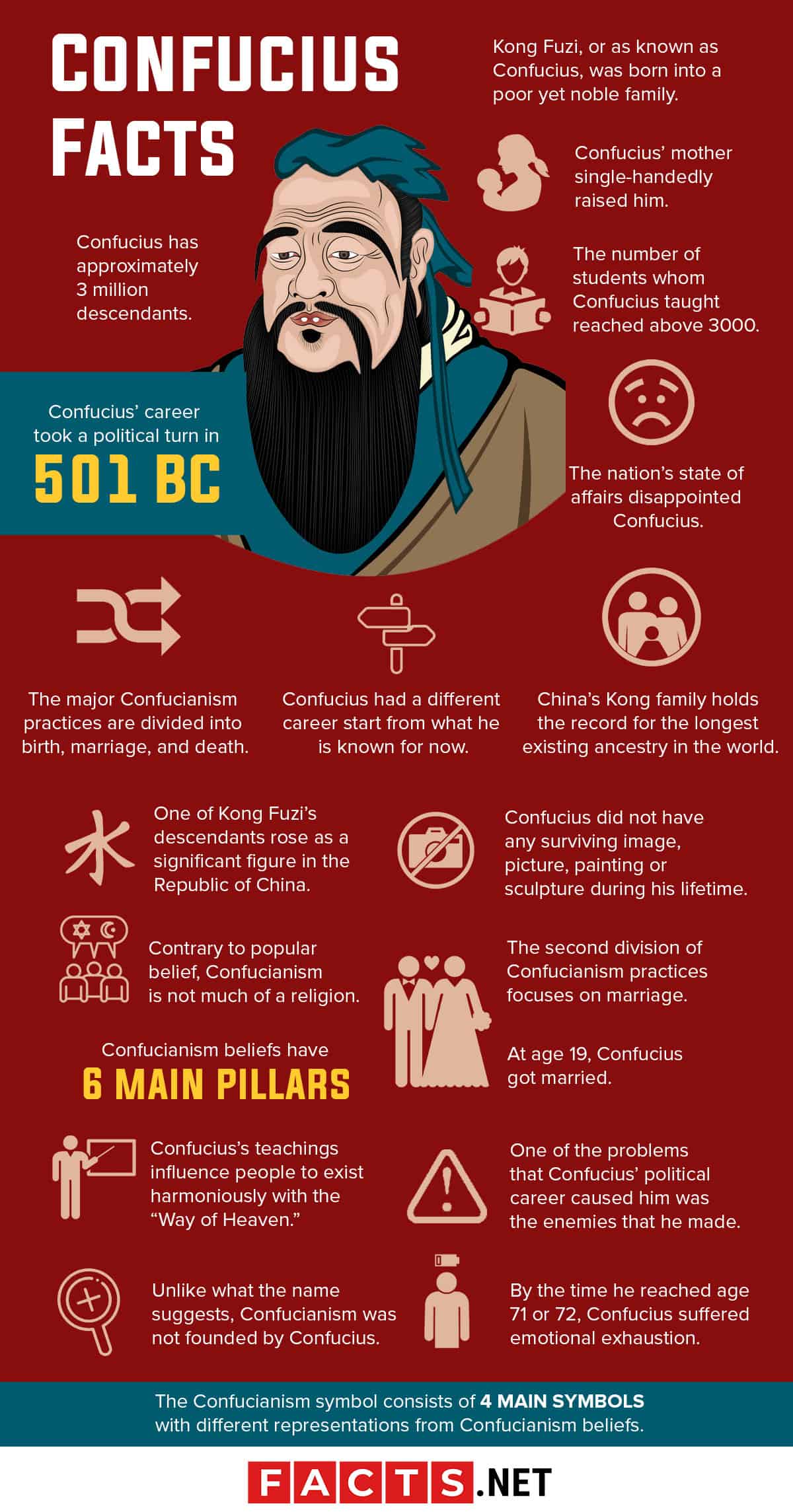 Kong Fuzi, or as known as Confucius, was born into a poor yet noble family.

His family lived in the Lu state, now Shandong province. However, being poor did not hinder his education and instead proved his noble upbringing.

His father Kong He, a military officer, died when he was only 3 years old. Since then, the one to raise him was his now single mother Yan Zhengzai.

At age 19, Confucius got married.

He had 3 children with his wife named Qiguan. The first son, Kong Li, was born a year after their marriage. Later, they gave birth to two more daughters, one of whom died tragically in childhood.

China’s Kong family holds the record for the longest existing ancestry in the world.

It means that Kong Fuzi’s family line has preserved records that extend way back longer than any other extant family. The Kong family has 83 documented generations, and it all traces back to the Chinese philosopher himself.

Of all the Confucius facts that you ought to know, this one might be too good to believe in. The Confucius Genealogy Compilation Committee is an organization that keeps track of the Chinese philosopher’s numerous relatives.

Despite the estimation of the number of descendants, only about 2 million of them are registered.

One of Kong Fuzi’s descendants rose as a significant figure in the Republic of China.

H.H. Kung began his influence in the Chinese government in the 1930s-1940s. Back then, Japan invaded China who was even going through an internal uproar.

Confucius did not have any surviving image, picture, painting or sculpture during his lifetime.

A lot of portraits of the teacher may have surfaced since his death, but there is no way of knowing which of them is the most accurate.

Confucius had a different career start from what he is known for now.

In his early 20s, Kong Fuzi labored as a bookkeeper and a guardian of horses and sheep. He only started teaching at 30.

Confucius’ career took a political turn in 501 BC.

His small birth town, the state of Lu, appointed him as the governor. It seemed to be a great start for him as he began to ascend through the ranks until he became the Minister of Crime.

Unfortunately, Lu was under both internal and external disputes. Confucius tried to assert his philosophy to the people but to no avail. By the time he was 56, he decided to leave and travel for 12 years.

The Chinese philosopher sought a leader who would put his ideas into reality. However, he returned barehanded and continued his teaching career.

One of the problems that Confucius’ political career caused him was the enemies that he made.

This dispute that occurred in mid 497 BC and 484 BC was what led him to exile himself. Most of his time away, he spent traveling to neighboring provinces.

Confucius was in his 50s-60s by this time that the long treks he made became an extreme exercise for him.

By the time he reached age 71 or 72, Confucius suffered emotional exhaustion.

His lifetime was long enough to have him bury his son as well as some of his own disciples. Finally, the philosopher died of old age and was buried in Kong Lin Cemetery.

His tomb had an original layout of an ax shape.

The number of students whom Confucius taught reached above 3000.

Out of those, 72 students succeeded as renowned wise men. Confucius has had the most number of disciples in ancient China’s educational history.

Contrary to popular belief, Confucianism is not much of a religion.

Instead, its characterization is more on the side of the social system and ethical philosophy. Confucianism stemmed from the foundations of ancient religion.

It is built on the institutions, social values and excellent goals of conventional Chinese society.’

Unlike what the name suggests, Confucianism was not founded by Confucius.

Master Kong developed ‘Confucianism’ in China way back 551-479 BC. The visiting Jesuits back then were the ones who gave him the name ‘Confucius.’

Meanwhile, the fundamental principles that served as the foundation for Confucianism started during the Zhou Dynasty. It was way before his birth, but he took the outmoded ideas and brought them to reality.

First is the ‘Confucius’ symbol which stands for the man who initiated the religion. Representing one of the 5 elements of Chinese philosophy is the Chinese character for water.

The next one, the Chinese character of ‘scholar,’ represents the value of knowledge and self-awareness. Lastly, the Yin Yang symbol is a common figure in Chinese religions but yields different meanings.

Confucius’s teachings influence people to exist harmoniously with the “Way of Heaven.”

In other words, each person must live virtuously and in service to be a living example to their fellows.

‘Chung’ meaning loyalty to the state

The major Confucianism practices are divided into birth, marriage, and death.

For births, followers believe that the spirit of the fetus ‘Tai-Shen’ guards the mother, firmly dealing with any harassers or harms towards the woman.

On the other hand, the mother abides by a special diet and a month of rest after delivery.

The second division of Confucianism practices focuses on marriage.

Marriage rituals that followers must execute have six parts. It starts with the proposal, followed by the engagement, exchange of dowry, procession, the marriage itself, and then the morning after.

Mourning family members make their clothes from some course material and wears them. Aside from the corpse, favorite food and important items are placed into the coffin.

The burial ritual is led by a priest or minister while guests accompany the coffin with a large willow tree branch on hand. This branch symbolizes the soul of the deceased person and is then carried back to be placed at the family altar.

Confucianism spread to other countries over the course of 2500 years.

From China, it managed to reach Japan, Korea, and Vietnam. Chinese influence passed the religion to neighboring countries through hierarchical diffusion.

Confucius differed from monotheistic religion prophets in a way that he did not preach personal human redemption theology.

What he taught was the philosophy to seek the redemption of the state which one could achieve with corrected individual behavior.

The orientation of this doctrine seeks to preach the social conduct code instead of the life path that follows after death.

Confucianism was not women-friendly.

By the time of the Han dynasty reign in China, Confucians had specific teachings regarding women. They require virtuous devotion from this gender to be obedient to their fathers in their youth, to their husbands during their matrimony, and then to their sons even until their widowhood and retirement.

People criticized this matter as an issue of women’s obliged submission to men. Moreover, Confucianism raised accusations in the damage of women’s lives in the long history of China.

They disagreed on how Confucius taught of a natural order wherein common people are acquiescent to the aristocracy. Once the communists took power, they banned any ceremonies that honored Confucius or his memory.

It was not until the 1990s when the ban was lifted in order to celebrate the philosopher’s part in the long and diverse history of China.

Confucianism was birthed into the ‘Hundred School of Thought’ period.

From the 6th century BC – 221 BC of Chinese history, the ‘Hundred School of Thought’ emerged. The name came from how it was recognized as a golden age in all of Chinese philosophy.

Among the numerous philosophies birthed during this era was Confucianism, and they all proceeded in shaping centuries of East Asian philosophy and education even after it has ended.

One of the many Confucianism temples in China was hailed as a UNESCO World Heritage Site.

Ironically, it was also the largest Temple of Confucius and is located in Qufu, Confucius’ birthplace.

Confucianism has reached the Europeans in the 17th century.

Back then, the Jesuit priests that visited Chine wrote about the man and his philosophy in the reports that they sent back to Europe. A man named Matteo Ricci was among the first ones to do so.

Confucius was not a fan of democracy.

His nonbelief stems from the concept of having the commoners choose the leader that would represent them by means of election. The philosopher does not believe in the equality of the people, therefore, he did not believe that it was right to give everyone such equality in power.

Moreover, he did not accept that these people could have the mental capacity to pick the most suitable leader for the post.

The oldest Confucius painting resurfaced from a Chinese ruler’s tomb.

A Han dynasty ruler, Marquis of Haihun, died in 59 BC. His tomb turned out to contain a bronze mirror built within a wooden frame which contains the said painting.

Despite the 420 years gap between the deaths of the two men, Marquis’ tomb revealed that the philosopher’s ancient painting still exists.