Darwin’s Dad Took Him Out of Medical School

Many Charles Darwin facts speak about education, particularly because Darwin is often credited with the Theory of Evolution which is a controversial subject in public education.

Robert Darwin enrolled Charles Darwin in the University of Edinburgh Medical School after Charles spent a summer apprenticing for him. He learned taxidermy during his time at medical school.

In his second year of medical school, Darwin’s inclination towards naturalism became clearer. Charles Darwin joined the Plinian Society at the University of Edinburgh. This society was a student natural history group.

It helped to develop and inform Charles Darwin’s naturalist tendencies and introduced him to different naturalist theories. In 1827, he presented an early discovery regarding black spores in oyster shells to the Plinian Society.

While Darwin was feeding his mind with naturalist history and helping classify plants at the university museum, Charles Darwin facts indicate he was neglecting his medical studies. Disappointed with his poor showing, Robert Darwin sent his son to Christ’s College, Cambridge, with the expectation that he would become an Anglican priest.

Charles didn’t qualify for the program and enrolled for a regular degree instead. At Christ’s College, Charles began collecting beetles and further fed his thirst for naturalist knowledge. He was also introduced to the possible connection between God and nature.

After graduating from Christ’s College, Cambridge and taking a vacation, Charles Darwin returned home to find a letter from his mentor, John Stevens Henslow. Charles Darwin facts indicate Henslow put forth Charles Darwin’s name as a novice naturalist on the upcoming HMS Beaglevoyage.

The HMS Beagle, captained by Robert FitzRoy, was to sail to the South American coast for an expedition lasting two years. In order to go, Charles Darwin would have to pay for his own passage. Robert Darwin did not like the idea of his son going on this two-year voyage. Robert Darwin’s brother-in-law, Josiah Wedgwood, convinced him to change his mind and fund the trip.

While slated to last only two years, Charles Darwin facts show the HMS Beagle expedition actually lasted 5 years. During this time, Darwin made many interesting discoveries, many of which weren’t deciphered until he was back on English soil.

Charles Darwin facts tell us that during his voyage on the HMS Beagle, Darwin sent specimens and letters back to England. The letters were published as a geographic pamphlet, so that when he returned from South America and the Galapagos, he was already well known in academic circles.

He met with a variety of naturalists to ask for help with the different specimens he had collected. His first paper was about the movement of the South American continent. This was based on observations Darwin made of seashells from a seashore or an ocean bed that were found in the mountains of South America.

That same day, he presented specimens at the Zoological Society. Amazingly, Darwin presented birds that he thought were blackbirds, finches, and grosbeaks.

John Gould, an ornithologist, later confirmed that the apparently different birds Darwin had presented were actually 12 distinct species of finches. Gould also helped Darwin determine that the mockingbirds he’d collected were also different species, not just varieties. These discoveries were integral to Darwin’s ideas of evolution and natural selection.

Charles Darwin Was a “Gentleman Scientist”

Charles Darwin facts tell us that, while Robert Darwin was initially reticent about his son’s chosen career as a naturalist, Robert Darwin became an important supporter of his son.

Robert Darwin funded his son, making it possible for Charles to be a gentleman scientist. This means he was not affiliated with a college or institution and did not have to rely on them for funding to do the work he thought was meaningful.

He also applied for grants when necessary to help publish his work, and that Darwin focused primarily on geology and naturalism.

Darwin suffered several bouts of poor health in his adult years. The first indication of illness was at the University of Edinburgh. Darwin disliked the sight of blood and felt sick.

Charles Darwin facts show that he consulted several medical professionals but never received a diagnosis. While on expedition with the crew of the HMS Beagle, Darwin fell ill several times.

Throughout Darwin’s lifetime, he had several recurring symptoms, including nausea, headaches, heart palpitations, irregular heartbeat, exhaustion, and vertigo among others.

While some modern medical professionals have asserted that perhaps Darwin suffered from a form of dysautonomia, Charles Darwin facts show that there is no sure way to verify a retroactive diagnosis.

While Darwin’s illness was limiting, it may have positively contributed to his work by keeping him focused on his research so his mind wouldn’t linger on the many maladies he suffered.

Charles Darwin facts inform us that Darwin died of heart failure on April 19 1882, at his home in Downe, Kent, England. Darwin had long suffered from heart pains and other illnesses that were never diagnosed. Because of a lack of diagnosis, Charles Darwin facts indicate those sick bouts were termed as Darwin’s illness.

Upon his death, Darwin expected to be buried near his home at St. Mary’s. However, his friends petitioned the Royal Society and asked that he be laid to rest at Westminster Abbey. Today, you can find his grave near the grave of Isaac Newton.

Due to the controversial nature of teaching the Theory of Evolution in public schools, there has been some interest in Charles Darwin’s religious affiliation. There were rumours that Darwin had converted back to Christianity before his death. These rumours were shown to be false by Francis Darwin, one of Charles’ sons. In his autobiography, Darwin discusses agnosticism and how it suited his viewpoints.

February 12 – Darwin Day Is Celebrated around the World

According to Charles Darwin facts, on February 12, people around the world celebrate the birth of this famous naturalist. The goal of Darwin Day is to encourage curiosity about the natural world so that we can continue to learn more about the wonders that surrounds us.

Charles Darwin facts show that On The Origin of Species was published on November 24 1859. The full title of what is perhaps Darwin’s most important work is On the Origin of Species by Means of Natural Selection, or the The Preservation of Favoured Races in the Struggle for Life.

Darwin was not the first person to suggest a Theory of Evolution. What made his work so important, according to Charles Darwin facts, is that it detailed a mechanism for evolution as a process. This mechanism, natural selection, is now widely accepted as a scientific theory.

While Darwin published his work in 1859, Charles Darwin facts point to evidence of his theory as early as 1838 in his notebooks. In 1858, Darwin felt compelled to share his theory of natural selection with the Linnaean Society for fear of having his work overlooked by what he viewed as a similar theory that Alfred Russel Wallace was preparing to publish.

It took Charles Darwin over 20 years to publish the major work that made his name synonymous with evolution and evolutionary theory.

Although Darwin’s most famous work is On The Origin of Species, his other works include: ‘The Expression of Emotions in Man and Animals’, ‘The Descent of Man, and Selection in Relation to Sex’, ‘The Power of Movement in Plants’ and ‘The Formation of Vegetable Mould Through the Action of Worms’.

Darwin visited his family while he was ill in 1837. During this time, his uncle, Josiah Wedgwood, showed him an area on the land where sand and silt covered areas where lime and cinder had previously been.

Darwin’s uncle told Darwin he thought it was the work of earthworms. This idea of earthworms changing the earth stayed with him throughout this lifetime and ‘The Formation of Vegetable Mould Through the Action of Worms’ was the final scientific book Darwin published before his death.

Due to illness, Darwin was told to take a few weeks off from work. Charles Darwin facts indicate that it was during this period of convalescence that he first met Emma Wedgwood. Emma was Charles Darwin’s first cousin on his mother’s side.

They met at her family estate in 1837 where she was taking care of her aunt. Darwin proposed marriage in 1838 and they were married on January 29 1839.

One of the surprising Charles Darwin facts is that, before proposing marriage, Darwin wrote a pro-con list. He decided the pro of having a companion in his life outweighed the con of losing some time for his work.

Charles Darwin and his Wife Emma Had 10 Kids

Charles Darwin had 10 children with his wife Emma. Two of these children died in infancy, and a third child, Anne, died at the age of 10. Anne’s death deeply affected Charles and Emma.

Darwin worried about the health of his children. He was concerned that by marrying his cousin, his children may have inherited weaknesses due to inbreeding.

While there has been no evidence to support this idea, Charles Darwin facts show that some of his children suffered maladies similar to those that plagued Charles Darwin throughout his adult life.

The Darwin Awards are a tongue-in-cheek recognition that highlight dumb behaviour, often leading to the death of the participant. Charles Darwin facts indicate that these awards are supposed to illustrate the downside of natural selection: that people who make poor choices which end in a loss of their life are taking themselves out of the gene pool. These awards have no association with Charles Darwin and are run by an individual with no ties to the Darwin family.

Charles Darwin facts tell us that Darwin visited Ascension Island in 1836 at the tail end of the HMS Beagle expedition. He found a volcanic island with little greenery. In 1843, his friend Joseph Hooker visited the island.

Darwin later suggested to Hooker that new plants and animals should be taken to the island to populate it. In 1847 Darwin convinced his pal Hooker to share their idea with the Royal Navy, who made frequent visits to the island. Today, Ascension Island resembles a tropic island with lush trees; it’s an artificially influenced habitat, influenced by the Father of Natural Selection!

Charles Darwin’s Face Almost Kept Him Off The HMS Beagle

According the Charles Darwin facts, the captain of the HMS Beagle, Robert FitzRoy, believed in physiognomy. This is the practice of judging a person’s character by their facial characteristics.

Darwin wrote that the captain believed Darwin’s nose showed a lack of the energy necessary to make the voyage. Thankfully, Darwin and FitzRoy hit it off and FitzRoy ignored any of his physiognomical misgivings. 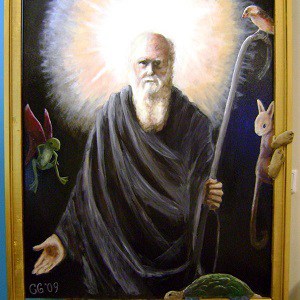 Facts about Charles Darwin teach us about this famed naturalist who is often credited with discovering evolution. Darwin discovered natural selection, the mechanism for evolution. The proof is in the pudding, and it seems proving the mechanism for evolution existed became more controversial than the theory of evolution itself. Darwin submitted himself to a 5-year voyage aboard the HMS Beagle, despite the ill health which plagued him throughout his life. It was during this voyage that many Charles Darwin facts were established, including the facts which led to his theory of natural selection.