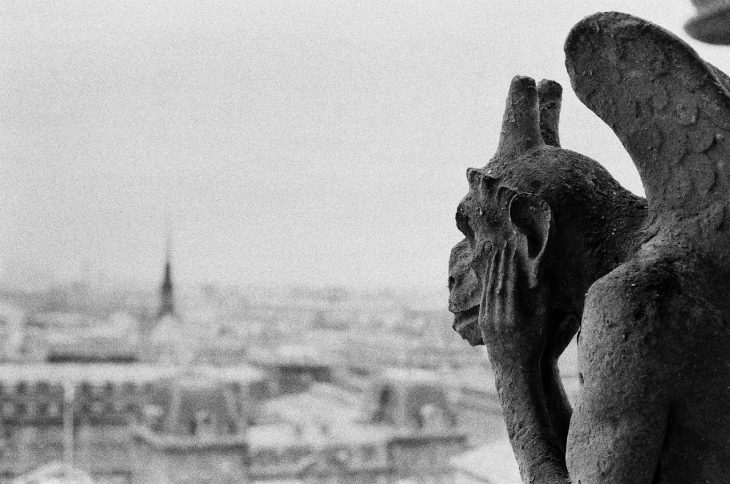 When people first hear the word gargoyle, they often refer to the statues found hanging on the side of the Notre Dame Cathedral. Before the 1800s, gargoyles have also been a common presence along the roofs of churches and schools.

In many cultures, people believe that these statues protect the people and ward off evil spirits. However, some people also believe that they are evil creatures waiting for the perfect moment to attack. Find out for yourself and learn more about these peculiar statues with these facts about gargoyles.

Quick Facts
Essential Facts
Interesting Facts
Table of Contents
01 People believed that Gargoyles protect the buildings that they guard.
02 Most gargoyles combine the features of two or more animals.
03 The oldest known standing gargoyle in the world can be found in Turkey.
04 There is an old animated TV show that featured living gargoyles.
05 In Greece, the original Temple of Zeus featured around 102 gargoyles in total.
06 Some Christian legends state that gargoyles are monsters that attack people.
07 Some believe that gargoyles represent the dangers that they protect people against.
08 Some gargoyles were designed like pagan deities to lure more people into joining the Christian faith.
09 People used to make gargoyles with human features as well.
10 In ancient Egypt, gargoyle designs typically took on the form of a lion with wings.

People believed that Gargoyles protect the buildings that they guard.

The majority of the time, people built these statues along the rooftop edges of buildings like churches and cathedrals. Many people believed that these statues of hybrid creatures could ward off evil spirits.

During the Middle Ages, people saw gargoyles as valuable protectors of their buildings’ residents. Historically, this may also explain why a majority of gargoyles have fierce features.

Most gargoyles combine the features of two or more animals.

More commonly, gargoyles combine parts from a lion, a bird, a bat, and a puma or leopard. That said, modern gargoyle statues mostly have large wings on its back and sharp teeth as a common feature.

Gargoyles have also made appearances in many folk tales throughout the ages. Across various cultures, they have been seen as guardians and offerings to gods. Several other stories portray gargoyles as companion animals, such as the Griffin and the Pegasus from ancient Greek culture.

The oldest known standing gargoyle in the world can be found in Turkey.

While experts still debate the age of the gargoyle itself, they still haven’t been able to pinpoint who made the first gargoyles. Compared to the modern designs for gargoyles, earlier versions don’t use beastly features such as wings, horns, and sharp claws.

There is an old animated TV show that featured living gargoyles.

Simply titled Gargoyles, this animated television show aired on Disney Channel  from October 1994 until February 1997. For a Disney show, the series had a relatively dark tone, featuring mythical creatures known as gargoyles that would come to life during the night.

With a total of 3 seasons, the series used Shakespearian themes which made it favorably comparable to the animated Batman series and Cybersix. The show’s storyline also continued later on in the form of a comic book series which was printed from 2006 until 2009.

In Greece, the original Temple of Zeus featured around 102 gargoyles in total.

Built in honor of the Greek God Zeus during the 5th century BC, the Temple of Zeus lies in Olympia, Greece. Constructed with a Peripteral form, the temple has a frontal porch set on a crepidoma platform with three unequal steps.

Along the temple’s rooftop, a total of 102 gargoyles line the edges. These statues featured designs such as triglyph friezes and carved metopes in the shape of a lion’s head. The gargoyles on the temple were also designed to act as waterspouts which also shows that the roof was repaired numerous times during the Roman period.

Some Christian legends state that gargoyles are monsters that attack people.

One of the legends from Christian faith describes gargoyles attacking a saint who was known to slay demons to protect those who are innocent. The legend states that during the rule of the French King Clotaire II in the 600s, he captured creatures that share the many common features of a gargoyle.

During one of his attempts to capture this monstrous creature, he attempted to burn and destroy its body with fire. However, its head and neck would not burn no matter how long it was set on fire. Instead, the king placed them on the side of churches to ward off other spirits that might come its way.

Some believe that gargoyles represent the dangers that they protect people against.

This belief originated from the Middle Ages when most of the public could not read and understand the Christian Bible. During this time, people largely believed that the purpose of setting gargoyles by the side of church buildings was to protect those of Christian faith.

To be more precise, this structural design placed on church buildings was said to be a threat to all those who posed as a danger to the faithful. This implies that it was not only evil spirits and monstrous creatures that gargoyles would protect Christians from, but non-believers who threaten the church as well.

Some gargoyles were designed like pagan deities to lure more people into joining the Christian faith.

According to another known legend about the origins of gargoyles, these statues were intentionally sculpted to resemble the pagan gods during the early ages. At the time, this was a method that many Christian churches used widely to attract those without faith in their religion.

At the time, many churches believed that by using this method and incorporating images of mythological deities, people will become more curious about them and join Christianity in the process. By stating that these gargoyles also act as guardians of the faithful, more people will also be attracted to Christianity to seek safety and a sense of security.

People used to make gargoyles with human features as well.

Also referred to as Chimeras, these human-like gargoyles are famously known for being a hybrid creature with human faces or parts. Many common gargoyles are also called as such because they combine several different features from different animals such as its face, tail, wings, and body type.

In ancient Egypt, gargoyle designs typically took on the form of a lion with wings.

More commonly known as a sphinx, these gargoyles often combine a lion with wings and the face of a human. These large gargoyles would also commonly have the tail of a cat or sheep.

In Ancient Egypt, these statues served as waterspouts that often took on the shape of lions that would spew water from its mouth.